Interferon-Beta and Pulmonary Artery Hypertension: Case Reports and Review of the Literature

Interferon Beta (IFNb) was the first developed drug for Multiple Sclerosis (MS) treatment. Its discovery and introduction to clinical practice, revolutionized the landscape of a disease that was thought to be incurable, being the driver of a paradigm shift in MS, from symptomatic management into disease modifying long-term therapy, with a tangible change in prognosis. Although newer, more effective and easier to manage drugs are now available, IFNb is still widely used as a first line treatment for MS, mostly because its safety and tolerability has been well known for many years. Common side effects include injection site reactions (erythema, pain, pruritus) and flu-like symptoms such as malaise, fever, headache, myalgia, chills; those are generally reported as mild or moderate at worst, although they often hinder treatment compliance [1-4].

A rare, albeit extremely severe complication of IFN treatment is Pulmonary Arterial Hypertension (PAH), historically defined as mean pulmonary arterial pressure (mPAP) ≥25 mmHg at rest, measured by right heart catheterization (RHC) [5]. Among the clinical classification of PAH, a specific category is reserved for drug- and toxin-induced PAH, which is subdivided in two groups: definite association to PAH, with data based mostly on large multicentre studies, and possible association to PAH, where correlation has been described in multiple case series. The latter category includes IFNb.

We report the case of a 31-year-old woman, who was diagnosed with Multiple Sclerosis (MS) in 2014. She was started on IFNb. Disease course was mild since then, with no evidence of disease activity, both clinically and radiologically, and very good tolerance of the drug. In early 2021, she developed progressive dyspnoea on exertion, weakness, and fatigue. She was then admitted to the Cardiology Department, where a transthoracic echocardiogram (TTE) showed pericardial effusion, hypertrophic and dilated right ventricle (RV) with mild systolic disfunction (Tricuspid annular plane systolic excursion [TAPSE] 13 mm, Fractional Area Change [FAC] 30%), and severe pulmonary hypertension (Figure 1A). 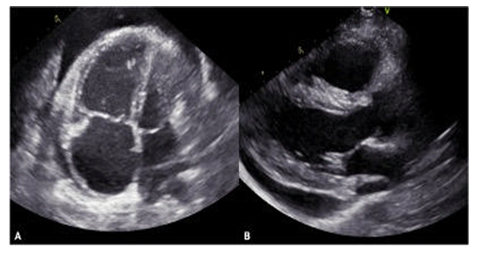 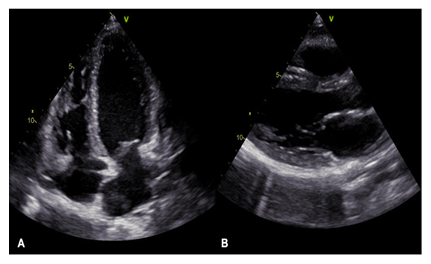 At the RHC (Table 1), PAP was sharply reduced (46/19/30 mmHg), CI was normal (3.91 L/min/m2) as well as RAP (6 mmHg); PVR were 3 WU. Genetic testing for the main variants associated with PAH was performed, and it did not show any significant result. MS disease course remained stable, and a brain and spinal cord MRI confirmed disease inactivity. She was therefore switched to Dimethylfumarate, reducing diuretic therapy. Double combination therapy was confirmed.

The second case report refers to a 53-year-old woman who was diagnosed with MS in 2009. She was started on IFNb with very good tolerance of the drug until 2015, when she developed dyspnoea at rest, and fatigue. The ECG showed sinus tachycardia with signs of right ventricle overload. At TTE RV was dilated and hypertrophic, with compression of left ventricle (Figure 2A). 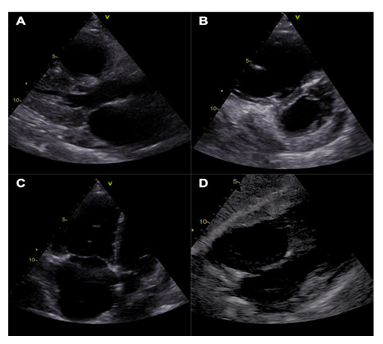 After 2 years of relative clinical stability, the patient’s conditions deteriorated to WHO class IV. Moreover, frequent infections at infusion site led to switch from treprostinil to epoprostenol (intravenous prostaglandin). Considering the young age of the patient, the absence of major comorbidities, the labile hemodynamic stability in the absence of alternative pharmacological treatments, the patient was listed for lung transplant (National Emergency Program) on March 2019. In July, 2019 she underwent uncomplicated double-lung transplantation. At 2-year follow-up the patient was in WHO class I. TTE showed a non-dilated RV, with normal systolic function without indirect signs of pulmonary hypertension (Figure 2B). 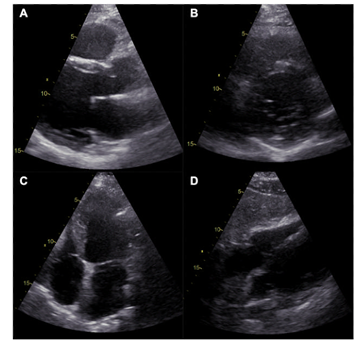 Genetic testing for the main variants associated to PAH was performed, and did not show any significant result. MS disease course remained stable (on therapy with dimethylfumarate since 2015). Diuretic and anticoagulation therapies were stopped, while low-dose of beta-blocker was continued (bisoprolol 1.25 mg OD).

3. Review of literature and Discussion

We searched the literature for reports of PAH in MS patients treated with IFN-b. The first patient was reported in 2009 [6], and since then, several case reports highlighted the association, for total of 18 patients [6-17]. All patients are female, which is only partly expected, as incidence of PAH is fourfold higher in women than in men [5], while MS incidence is threefold higher in women than in men [18]. Development of PAH seems to be a somewhat slow process, as median treatment duration before PAH presentation was 6 years, with the only notable exception being one patient [13] who developed PAH after just one year of IFN-b treatment. Cardiac measurements at presentation are generally rather severe (Table 3). Mean PAP at presentation was 57.7 mmHg (± 16.1), mean cardiac output 3.4 L/min (± 1.9), mean PVR 14.8 was WU (± 9.2). This is consistent with the natural history of the disease, which can be insidious at first and manifests when pathology is well ahead of the clinical picture.

Table 3: Clinical and hemodynamic characteristics of patients with MS and PAH: review of the literature

To date, PAH occurrence in IFNb treated patients is considered very rare. The largest study to provide reliable numbers retrospectively examined 20,113 subjects treated with interferon α or β therapy for either hepatitis C or multiple sclerosis19. Pertinent to this article, patients with MS treated with IFN-b were 7190; among those, 11 developed PAH. Epidemiological data show that the incidence of PAH ranges from 2.0 to 7.6 cases per million adults per year5; considering total numbers of IFN-a and -b patients and correcting for follow-up years, the authors concluded that the risk of developing PAH in patients receiving interferon α or β therapy is several folds higher than expected compared to the general population. Moreover, the combination of such severe clinical pictures and the young age of patients elicits further considerations on whether there should be some genetic predisposition for developing PAH, which might then be triggered by IFN-b treatment. The two patients described by Lerche et al. were screened for a panel of gene variants associated with PA9. One of them was found to have a nonsense variant in the recently described PAH gene ATP13A320; in the other patient, a missense variant in the CYP1B1 gene was recorded, and recent studies have described its role as a mediator of toxin induced PAH21. Notwithstanding the rarity of the association, these embryonic data show promise to suggest a possible genetic predisposition in some MS patients to develop PAH during IFNb therapy. A crucial point is whether PAH developed because of IFN is reversible or not. MS patients are generally quite young and, at least early in disease course, relatively free of disability. Therefore, a diagnosis of PAH, given its generally severe prognosis, could become a much heavier burden on their life expectancy than MS. A vast majority of the patients reported (15 out of 18) showed some improvement; the only patient who underwent lung transplantation, did not switch from IFNb therapy until several years after PAH presentation8. Two patients in the report by Savale et al. died15, although disease course was not reported.

Most interesting aspects of our case reports derive from the great likeness of presentation and the absolute difference in terms of disease progression:

According to our case reports, a discrepancy in terms of clinical outcomes can be noted, given the need for lung transplantation in the second patient, even in the presence of a correct diagnosis and a rapid and aggressive therapeutical work-up.

These findings, although preliminary, may suggest the presence of other modifying factors not known to date, such as new genetic variants related to PAH or polymorphisms that affect IFNb metabolism, that may heavily interfere with the prognosis of IFNb-related PAH.

IFNb is generally considered a very safe treatment for MS, albeit more effective drugs are available. However, it is important to raise awareness of PAH, a rare but potentially fatal complication. Close attention to early signs of PAH, such as dyspnea, reduced exercise capacity, exertional syncope, particularly in female patients after a few years of treatment exposure, is key. Timing of drug discontinuation is crucial and early treatment with PAH targeted therapies can improve functional outcome and help symptoms management and long-term prognosis. Nonetheless, a variability in clinical response has to be taken into account.

New studies are needed to foresee clinical course of these patients, and a close follow-up is mandatory.