Lead-Induced Peripheral Neuropathy in a CKD Patient on Maintenance Hemodialysis

Peripheral neuropathy due to lead intoxication is a common presentation but secondary to maintenance hemodialysis is a rare find, especially with the international guidelines in place about the dialysate fluid required for hemodialysis. We report herein a 26-year-old Asian man who developed end-stage renal failure, followed by bilateral foot drop, in whom the maximal total blood lead was 34 µg/dL. Measurements of lead in his tibia and calcaneus by K-x-ray fluorescence, however, showed markedly elevated values. The foot drop cleared after few months of treatment with oral succimer and subsequent lead levels were below 10 µg/dL. The Lead source was investigated and found to be high in the dialysate used for maintenance hemodialysis. Succimer therapy along with dialysate meeting the international standards were used which resulted in improvement of the symptoms.

Lead (Pb) is a well-known source of toxicity. Among the toxic manifestations of lead are peripheral neuropathy (usually motor), nephropathy, encephalopathy, abdominal colic, anemia, polyarthralgia (linked to gout), and hypertension. Lead accumulation in the body can affect both the central nervous system and peripheral nervous system. Peripheral neuropathy may cause reduced motor activity causing muscular weakness, fatigue, and lack of muscular coordination [1]. Lead present in the bloodstream is either excreted in urine or bile at a clearance rate of 1 to 3 mL/min or is distributed to different soft tissues in the body and eventually accumulates in bone. The half-life of blood lead is 30 days but that in bone is 20 to 30 years. Therefore, blood lead levels are more reflective of acute exposure, whereas bone lead levels better reflect cumulative exposure over time.

Patients with chronic renal failure requiring treatment by hemodialysis are at risk of developing trace element imbalances. One of these disturbances is raised lead (Pb) levels which have been demonstrated in various studies. A study on trace element status of hemodialyzed patients saw that the concentration of blood lead was greater than normal [2]. Another study measuring blood lead in end-stage renal disease (ESRD) patients who were on maintenance dialysis (MHD) showed that the blood lead level was higher in the ESRD patients who were on MHD than in healthy adults. The blood lead concentration was found to increase with the duration of the MHD [3]. Similarly, a study was done to measure serum trace elements in the blood of children with ESRD [4]. It found out that serum lead levels were higher in children on hemodialysis than in healthy children or those with ESRD but managed conservatively. Lead can cause damage to the nervous system through various mechanisms both directly and indirectly. Direct effects include disruption of synapse formation, interference with neuronal migration and differentiation, interference with neurotransmitter release, inhibition of NMDA-ion channel, and inhibition of Na-K-ATPase pump [5]. Lead also disrupts calcium release from mitochondria, resulting in increased reactive oxygen species formation and self-destruction of mitochondria [6]. Indirect effects on the nervous system result from the increasing risk of numerous conditions that may have adverse effects on nervous system functions, including hypertension, impaired renal function, and impaired thyroid function.

Here we discuss a case report of lead-induced peripheral neuropathy in a chronic kidney disease patient on maintenance hemodialysis.

A 26-year-old male first presented with hypertension (160/100) in February 2018. Urinalysis on initial presentation showed 2+ proteins. Sediments were negative for RBC and white blood cells (WBC). There were no RBC or WBC casts. Hematocrit was 17.3%, and hemoglobin was 6.3 g/dL. WBC was 6,800 g/dl and platelet count, 276,000 g/dl. Venereal Disease Research Laboratory test results were negative. Calcium was 5.9 mg/dL and phosphorus 6.6 mg/dL. Sodium was 130 mEq/L; potassium, 4.7 mEq/L; chloride, 104 mEq/L; carbon dioxide, 12 mEq/L. A presumptive diagnosis of end-stage renal disease secondary to hypertensive nephrosclerosis was made. However, no renal biopsy was performed to confirm the diagnosis, and a concrete underlying cause was not found. The patient was then placed on a three times weekly hemodialysis.

In September 2020 he presented with difficulty going up the stairs, pain and numbness in the legs, and difficulty getting up from the floor. These symptoms developed progressively over the previous three months. During this time, he also noticed progressive muscle loss in the legs. He had been wheelchair-bound for a month. There was no history of weakness or muscle loss in the arms. He also didn’t have any visual changes, shortness of breath, or difficulty swallowing. His urinary output was zero due to chronic kidney disease and was on hemodialysis (AVF in the left arm). He had lost 27 kg weight in 2 years. There was no family history of such a disease.

On physical examination, he was thin, lean, and pale. His attention, concentration, orientation memory, language, and fund of knowledge were within normal limits. He had bilateral foot drop (Figure 1) and mildly weak flexion in both knees. There was muscle loss in the thigh and calf region of both legs. Deep tendon reflexes were reduced in both lower extremities and plantar reflexes were absent. Vibratory sensations were reduced in the toes. Muscle strength in all other body parts was normal. There were no cranial nerve deficits. He had normal upper and lower limb muscle tone. 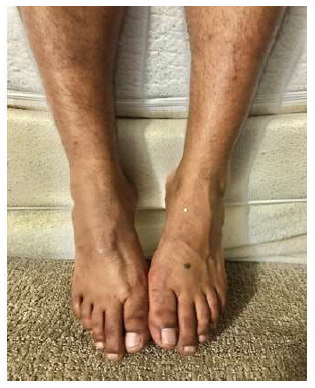 His blood workup (Table 1) at the time showed Hemoglobin 10 g/dl, Urea 18mg/dl, Creatinine 7.11mg/dl, Potassium 2.9mmol/L, and Sodium 134mmol/L. Erythrocyte sedimentation 12 mm/hr and C-reactive protein 1mg/L. He had negative results for ANA, ASMA, AMA, ENA, and ANCA. C3, C4, Thyroid hormones, PTH and vitamin B12 levels were also normal. On Echocardiogram he had a dilated right atrium, concentric left ventricular hypertrophy, pericardial effusion, and an ejection fraction of 65%. On lumbosacral spine MRI there were some changes in L4-L5, but there was no evidence of right (L2-5, S1) and left (L4-5) lumbosacral radiculopathy. Nerve conduction study and Electromyography (EMG) were abnormal with electrodiagnostic evidence of chronic predominantly moderate to severe axonal motor polyneuropathy with some demyelinating features.

Because of the progression of her neuropathy, a blood lead level was checked on September 12, 2020, and returned high at 34 µg/dL. Measurements of lead in her tibia and calcaneus by K-x-ray fluorescence, however, showed markedly elevated values. The Lead source was investigated and found to be high in the dialysate used for maintenance hemodialysis. Dialysate meeting the international standards was used thereafter and Succimer therapy was begun. The follow-up blood lead levels were 22 µg/dL and 15 µg/dL and 8 µg/dL. His footdrop resolved at that time and hemoglobin improved. Subsequent blood lead levels were never above 10 µg/dL. A kidney transplant was recommended for long-term management.

Hemodialysis is a very common treatment modality for end-stage renal disease patients but is associated with many complications such as accelerated cardiovascular disease, infections, and trace element disturbances. However, the possibility that trace elements may accumulate in patients with kidney failure and causes unrecognized toxicity has received surprisingly little attention. Lead accumulation in the patient discussed above, treated with maintenance dialysis may be due to one of the following mechanisms.

Clinical manifestation of lead neuropathy depends upon the time duration and extent of exposure. Subacute exposure to lead is associated with classic motor manifestations involving weakness of extensors of wrist and fingers which gradually move on to involve other muscle groups. Rarely, it starts from distal lower limb muscles involved in ankle dorsiflexion and toe extension which is very much similar to the presentation of our patient. Occasionally, if the intoxication is very severe it can progress to quadriplegia. The weakness is accompanied by muscle atrophy but fasciculations are not reported. Chronic exposure can lead to severe polyneuropathy involving both large and small nerve fibers damaging not only motor control but also the sensory modalities such as pain, vibration, pinprick, and temperature sensations [10].

Electromyography and nerve conduction studies can be used to evaluate the extent of damage done by lead. Electromyography done in our patient showed that he had moderate to severe axonal motor polyneuropathy mainly affecting the distal muscles of the lower limb. Muscles present in the extensor and flexor compartment of lower legs were affected resulting in bilateral weakness of ankle movement. The prognosis of recovery is good, once the exposure has been reduced, depending upon and the extent of weakness. If the extent of damage is severe then the recovery will be slow and incomplete.

Peripheral neuropathy due to lead intoxication is a common presentation but secondary to maintenance hemodialysis is a rare find, especially with the international guidelines in place about the dialysate fluid required for hemodialysis. This case shows that still strict monitoring and implementation of these

guidelines is required and negligence can have drastic consequences.