Left Ventricular Outflow (LVOT) masses are rare and raise concern for infective endocarditis vegetations, thrombus, and cardiac tumors. When these masses arise in the LVOT, they can lead to symptoms of LVOT obstruction and thromboembolism. The most common cause of a cardiac tumor is cardiac myxoma, occurring in 0.02% of the population, and almost exclusively arises in the atria [1]. We present two cases of large cardiac masses of different pathology arising in the left ventricle causing LVOT obstruction.

A healthy 57-year-old female was found to have a murmur and underwent Transthoracic Echocardiogram (TTE) demonstrating a large mass attached to the LV and part of the Mitral Valve (MV), prolapsing into the LVOT. When sent to hospital for further workup, the patient denied symptoms of heart failure, infection, and constitutional symptoms. There was no history of transient ischemic attack, stroke, or migraines. Upon examination, she was euvolemic with a 2/6 systolic ejection murmur along the right sternal border. Repeat TTE revealed a pedunculated 2×3 cm mass in the inferior left ventricle (LV), attached to the anterior MV leaflet, causing intermittent LVOT obstruction. Peak and mean LVOT gradients were 29 and 13 mmHg respectively. Due to the size and obstructive pathology of the mass, the patient was taken for urgent surgical removal. Intraoperative Transesophageal Echocardiogram (TEE) confirmed a large pedunculated mass arising from the LV, with attachment to the anterior MV leaflet, prolapsing into the LVOT, and causing a maximum LVOT gradient of 28.9 mmHg. Biventricular size and function were normal with no other valvulopathy noted. She subsequently underwent sternotomy and was placed on Cardiopulmonary Bypass (CPB) via central cannulation. The heart was arrested with antegrade and retrograde cardioplegia. A transverse aortotomy was performed 2 cm above the sinotubular junction and the mass was immediately visible prolapsing through the AV. The mass was mobilized, revealing attachments to the LV septum and not the MV. The septal base of the tumor was then ablated using cryoablation to ensure tumor free margins. Postoperative TEE confirmed no residual mass with no significant AV or LVOT gradients, and normal AV function. Immunohistochemical studies confirmed cardiac myxoma (factor VII, CD34+ve, CD31+ve, calretinin, pancytokeratin, and vimentin) with septal muscle the tumor base.

A 79-year-old female, with a history of smoking, hypertension, hypothyroidism, stage III chronic kidney disease, and a stable meningioma presented to the emergency department with an episode of syncope without prodrome. ECG revealed sinus bradycardia (HR 40 bpm) on arrival. MRI brain showed stable meningioma, with no acute infract or hemorrhage. TTE confirmed a mass attached to the anterior LV septal wall with a peak intra-cavitary gradient of 100 mmHg during systole due to almost complete obstruction of the LVOT by this tumor. Cardiac MRI demonstrated a 1.2 × 1.2 cm hypermobile mass in the LV with possible attachment to the anteroseptal wall via a stalk (Figure 4). Further assessment with CT cardiac confirmed this mass was attached to the anterior wall of the LV. In the setting of syncope, electrophysiology consultation was obtained that ruled out any conduction abnormalities or sick sinus syndrome, syncopal episode appear to be obstructive in nature. With no other cause identified, the patient was taken surgical excision. She underwent sternotomy and placed on CPB. The mass was accessed through the aorta, and two separate tumors were identified, one at the level of the interventricular septum approximately 4 cm from the aortic valve and the other 1 at the very apex of the left ventricle. They were both resected with margins. A limited LV myectomy was utilized to ensure negative margins, the apical tumor was resected with margins as well through the aortic valve. Pathology workup revealed the mass to be a papillary fibroelastoma with negative margins (Figure 6).

Cardiac neoplasms are often referred to as “great mimickers”, as they have no pathognomonic features, and can be associated with variable presentations. Cardiac masses involving the LVOT are rare, and often suspicious for thrombus, vegetation, or primary cardiac mass. The differential of primary cardiac neoplasm in the LV includes: fibroma, rhabdomyoma, lipoma or lymphoma. Herein, we present two unusual cases of patients with cardiac masses arising from the LV causing symptoms associated with LVOT obstruction as their initial clinical presentation.

Echocardiography remains the cornerstone for diagnostic evaluation of suspected cardiac masses [2], providing rapid morphological characterization and dynamic identification of their hemodynamic consequences. Diagnostic TEE may be useful in determining mass etiology, particularly in ruling out thrombus. Prompt echocardiographic characterization is important, as thrombus and cardiac masses often have similar morphology, but very different management strategies. The use of contrast echocardiography to identify tumor vascularity or tissue Doppler imaging to assess mobility can be helpful to make this distinction [2]. Additionally, three-dimensional TEE may further provide information about concomitant attachments, morphology, and functional impact. The gold-standard technique in the work-up of cardiac tumors is cardiac MRI (CMR) [3]. CMR may provide precise information about tumor extent, location, and tissue characterization, with the ability to differentiate fat, fluid, and blood. CMR should therefore be used to rule out thrombus or vegetation when suspected. Additionally, CMR has a high diagnostic accuracy for predicting malignancy of masses based on tissue characteristics of the tumor, such as large size (>5cm), irregular border, or invasion through tissue planes, tissue heterogeneity on T1 and T2 weight images or presence of pericardial effusion [4, 5] (Figure 4). Cardiac computed tomography (CT) is an alternative imaging modality to assess cardiac masses, given its wide availability. Similar to CMR, CT provides information about tumor size, location, morphology, and tissue characterization. However, CT generally offers lower resolution and tissue characterization compared to CMR and echocardiography. Compared the other modalities, CT has superior detection for the presence of calcification, which can be suggestive of fibroma or hemangioma, and can further assess contrast enhancement of the mass, indicating tumor vascularization [6]. CT acquisition is also important for surgical planning, including assessment of the coronary arteries [5], involvement of pericardium or great vessels, the best surgical approach to the tumor, and optimal cannulation strategy. Cine CT imaging with steady-state free-precession (SSFP) sequence can further assess the mobility of a mass, in addition to evaluating its impact on cardiac function [2] (Figure 5).

Cardiac myxoma is the most common cause of cardiac neoplasm, almost exclusively arising in the atria [1]. Myxomas are usually asymptomatic and indolent. Consequently, the most common initial presentation is thromboembolism [7]. Alternatively, patients may be symptomatic with heart failure due to obstructive mass effect or valve function impairment [1]. There are two pathological phenotypes of myxoma as originally described by St. John et al., Papillary myxomas (characterized by an irregular exterior and are associated with neurologic symptoms and embolic phenomena) and solid myxomas (characterized by smooth borders, and often present with heart failure) [8]. On CMR, myxomas usually appear as isodense or hypodense on T1, hyperintense on T2 suggesting high water density, and typically enhance with gadolinium [2]. Complete surgical resection is indicated in patients with LV myxoma, for the prevention of embolic complications [9].

Papillary fibroelastoma most commonly occur on the downstream surfaces of the aortic and mitral valves [1], and rarely on endocardial surfaces. The incidence of papillary fibroelastoma is 0.3%, with a predilection for the left heart [10]. Although papillary fibroelastomas are benign neoplasms, patients typically present with cerebral embolic complications. Pathologically, they are characterized by an avascular collagenous core containing mucopolysaccharide and elastin [1]. On TEE they have a shimmering appearance due to vibration of its finger-like projections. T1 and T2 MRI weighted images usually appear with similar intensity to the myocardium, reflecting their fibroelastic composition with uniform intermediate signal intensity [5]. CT characterization of fibroelastoma are challenging due to their small size. Surgical excision is indicated for tumors to reduce the risk of stroke irrespective of size or symptomatic status [11].

Cardiac masses can lead to LVOT obstruction due to mass effect. This may lead to symptoms as LVOT gradients increase, and may predispose to sudden cardiac death [12], as gradients become severe. The high pressure of the LVOT during systole may also increase the risk of systemic embolization (reported up to 50% in LV myxomas), which further supports the urgent need for surgical intervention [13]. In general, the transaortic approach is the preferred method to access masses in the LVOT. For adequate visualization of tumors more distally near the LV apex, access through the left atrial groove or the LV apex may be required to visualize and mobilize the mass completely without disruption, this is more morbid to the heart than a transaortic approach.

Prognosis of cardiac myxomas is excellent following surgical excision [14], with a mortality of <1% [15]. Intracardiac recurrence occurs at a rate of 3% in sporadic myxomas, and 12-22% in familial cases (Carney’s complex) [16]. Local recurrence of myxoma may result from incomplete surgical removal or undiagnosed multicentric primary lesion [14,16] Shah et al showed that ventricular tumors, younger patients, and smaller tumors were at higher risk of recurrence [17]. Cryoablation of the myxoma stalk has been previously described as a technique to theoretically decrease recurrence, however, this has yet to be validated [18]. Most authors advocate that wide endocardial resection with clear margins should be performed when there is little risk of excising additional tissue [17] in order to reduce recurrence. In this report two surgeons used two different approaches to secure negative margins.

In summary, although cardiac myxomas or papillary fibroelastoma are a rare cause of mass in the LV, particularly in the LVOT, they must be considered a differential along with thrombus or vegetation. This highlights the importance of multimodal diagnostic imaging to confirm a correct diagnosis before any intervention is undertaken. Given the high incidence of thromboembolic complications or potential of LVOT obstruction, prompt diagnosis and surgical excision are advised. There are different approaches to get access to these tumors arising in the interventricular septum. We recommend a transaortic approach as the least morbid way to provide negative margins after excision. In any oncological operation where tumoral tissue is removed a negative margin resection is the most paramount goal a surgeon must achieve. 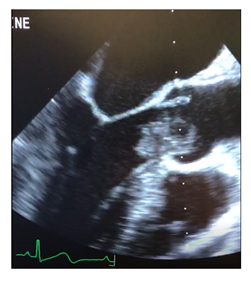 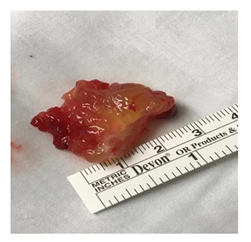 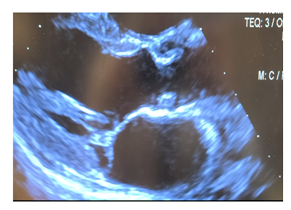 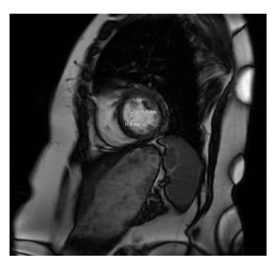 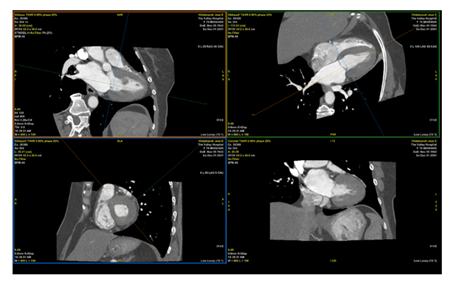 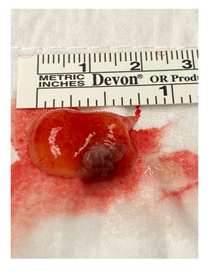