Left ventricular (LV) pseudoaneurysms are the consequence of cardiac rupture, usually contained by adherent pericardium or fibrous scar tissue. They represent, from a functional point of view, the acquired blood-filled spaces that are external to the cardiac chambers but communicating with the ventricle. They can occur after transmural myocardial infarction or, albeit less frequently, post-traumatically. This cardiac disease has been a topic of discussion since the pioneering days of heart surgery. We present a case of a posttraumatic LV pseudoaneurysm, in which the causative blunt trauma happened 30 years prior to the onset of symptoms. Severe functional mitral regurgitation (FMR) resulted from leaflet tethering and partial rupture of the posteromedial papillary muscle complex.

A 48-year-old man presented with symptoms of progressive biventricular congestive heart failure despite medical therapy. The patient had attempted suicide by jumping out of a window thirty years previously, for which he received lung and hepatosplenic surgery. On admission, the chest X-ray showed cardiomegaly and pulmonary congestion. A transthoracic echocardiography (TTE) (Figure 1) showed an LV with a posterolateral pseudoaneurysm (75 × 55 mm). The LA was dilated and with severe FMR due to the tethering of the MV apparatus. Additionally, a partial rupture of the posteromedial papillary muscle complex with relative PML prolapse was found. Using 3D-TEE we calculated an EROA of 0.3 cm², a RVol of 31 ml, an LVEDV of 326 ml and an LVESV of 262 ml. The forward SV, as assessed by Doppler, was 33 ml. Therefore, mitral regurgitation was defined as severe due to a regurgitant fraction of 50%.

Coronary angiography confirmed a posterolateral aneurysm of the LV, left dominant supply and no coronary artery stenoses. A multislice CT-scan (Figure 1) revealed a LV pseudoaneurysm measuring 70 × 80 mm. LVEDV without aneurysm volume was 298 ml, LVESV was 219 ml and LVESVI was 113 ml/m². Diastolic aneurysm volume was 204 ml. The LVEF calculated the difference between end-diastolic and end-systolic volume to be 27%. Taking the measured echocardiographic effective forward SV of only 40.3 ml into account, the LVEF was calculated as 13%. MV morphology assessment with MSCT confirmed severe tethering of the mitral apparatus.

After a median sternotomy was performed, a previous pericardial rupture at the level of the right pulmonary veins was revealed. A pseudoaneurysmectomy was performed, followed by patch-closure (70 × 40 mm) of the aneurysmal neck according to our institutional treatment algorihthm [2]. MV replacement was performed in a standard fashion with preservation of the chordae tendinae in order to maintain the normal geometry of the mitral subvalvular apparatus. CPB-time, X-clamp-time, and reperfusion-time were 180 min, 126 min, and 34 min, respectively.

The postoperative recovery was uneventful. TTE at the time of discharge revealed a LVEDD of 68 mm and a LVESD of 55 mm. The LVEF had improved to 30%. There was diastolic dysfunction grade I, as well as a trace of transvalvular MV and TV insufficiency of less than grade I. Postoperative computed tomographic (Figure 2) LVEDV was 252 ml, LVESV was 169 ml and LVESVI was 84 ml/m². The SV increased to 83 ml and LVEF was measured as 33%. The MRI performed 6 months later revealed a further decrease in LV dimensions with a LVEDD of 52 mm and a LVESD of 36 mm and a normalization of LV volumes and function with an LVEDV of 174 ml (LVEDVI 89.5 ml/m2) and an LVESV of 85 ml (LVESVI 43.8 ml/m2). SV was calculated as 85.2 ml, LVEF 50%, CO 5.5 l/min, and CI 3 l/min/m². 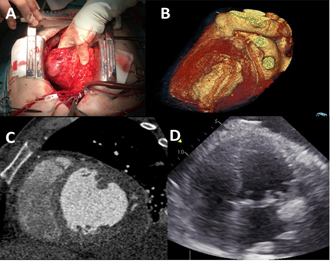 LVP typically occur in adults following transmural myocardial infarction and less frequently after trauma [1-3]. Delayed presentation of an adult posttraumatic chest penetration LVP of up to 25 years has been reported, yet our patient presented 30 years after blunt trauma. In general, cardiac contusion can lead to extended myocardial damage and reverse remodelling in such a way that overall cardiac function is impaired [4]. Usually there is a complete clinical recovery with minimal residual scarring [5]. However, in some cases, softening and fibrotic replacement of the contused myocardium is followed by thinning of the scar which leads to dilatation and aneurysm formation [5]. This process may produce a true aneurysm within days or could take up to a number of years [5]. The management of concomitant MV regurgitation in the case of posterolateral LV aneurysms remains a matter of debate. MSCT and TEE are useful tools in guiding the surgical decision making.

The clinical course of patients with an untreated pseudoaneurysm is relatively poor since they have a high tendency to rupture [3]. If the diagnosis is delayed after the initial trauma, the necessity and urgency of surgery depends on the symptoms. Ventricular pseudoaneurysm following a blunt chest injury is associated with complications. These include arrhythmias, rupture, embolization, and congestive heart failure. Therefore, when symptoms are present, surgery should be performed.

We thank Anne Gale and Susan Holder for editorial assistance.