Initially reported by Hattori et al. in 2005, there have been recent reports of posterior mediastinal cysts with developmental endosalpingiosis-müllerianosis, also known as Müllerian cysts. Here, we present a unique case of symptomatic posterior mediastinal Müllerian cyst in a 47-year-old female managed with robotic-assisted thoracoscopic surgery. The final diagnosis was confirmed with the histopathologic assessment, which showed the lesion was positive for estrogen, progesterone, PAX8, and WT1 receptors. Mullerian cysts of the posterior mediastinum can cause compressive effects on nearby stellate ganglion, causing symptoms suggestive of the sympathetic storm. These cysts should be evaluated by a dedicated thoracic and gynecologic pathologist for accurate diagnosis. Thoracic surgeons and Gynaecologists should consider these lesions in patients with appropriate clinical and demographic characteristics.

The adult primary congenital posterior mediastinal cyst is a relatively rare diagnosis but has seen a steady increase in incidence over the last two decades due to advancements in cross-sectional imaging [1]. The majority of diagnoses in this region of the mediastinum are bronchogenic cysts, esophageal duplications cysts, or paravertebral tumors. Initially reported by Hattori et al. in 2005, there have been recent reports of posterior mediastinal cysts with developmental endosalpingiosis-müllerianosis, also known as Mullerian cysts [2]. To date, there have been less than 30 of these cases described in the literature, with varying treatment strategies employed in each incidence. The majority of the lesions were discovered incidentally as part of a workup for other etiology with minimal systemic symptoms owing to the primary cyst [2, 3]. Treatment of choice in this setting is resection of the cyst for definitive histopathologic diagnosis through the use of posterolateral thoracotomy or video-assisted thoracoscopic resection in experienced hands.

Here we present a unique case of posterior mediastinal Mullerian cyst in a 47-year-old female who initially presented with signs and symptoms suggestive of neuroendocrine tumor secondary to sympathetic ganglion compression which resolved with surgical excision. The diagnosis was confirmed with immunohistochemical stains, which showed the cyst and its contents to be positive for estrogen, progesterone, PAX8, and WT1 receptors, indicating a müllerian choristoma composed of endosalpingeal tissue misplaced during organogenesis. Additionally, we detail novel resection of the posterior mediastinal Mullerian cyst with the use of robotic surgery, which to date have been documented once in the literature.

A 47-year-old otherwise healthy female presented to her primary care physician new-onset headaches, epistaxis, palpitations, episodic hypertension, and syncopal episodes not responding to physical stimulus. Initial workup did not show any laboratory abnormalities, but her systolic blood pressure, previously normal, was noted to be newly elevated to 160's mmHg. Electrocardiogram and Holter monitoring were unremarkable. The constellation of symptoms was concerning for pheochromocytoma. However, subsequent workup, including serum and urine metanephrines, were within normal limits. Cross-sectional imaging, including CT and MRI, did not reveal any concerning lesions in the abdomen or pelvis. Despite the uneventful diagnostic workup, the patient continued to have recurrent symptoms, including new-onset supraventricular tachycardia. Over the ensuing months, she was hospitalized multiple times for her symptoms. Additional full-body MRI and CT of the thorax were performed to evaluate for potential extra-adrenal paraganglioma. 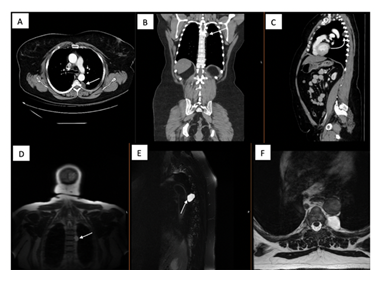 Gadolinium-enhanced multiplanar high-field MRI scanner revealed a left-sided non-enhancing T2 hyperintense T1 hypointense cystic structure contiguous with one of the small nerves along the descending thoracic aorta without extension into the spinal foramen (Figure 1 (D-F)). The constellation of findings raised suspicion for a potential peri-neural cyst. At the time, it was thought that the cyst was exerting a mass effect on the nearby sympathetic ganglia, which in the absence of biochemical abnormalities could account for the patient's symptomatology.

Given the symptomatic nature of her symptoms with multiple recent admissions to the hospital and a significant decrease in the quality of life, addressing the lesion was paramount. Although the MRI was concerning for cystic lesion, aggressive tumors, especially in the setting of communication with the sympathetic chain, could not be excluded. Additionally, lack of findings pointing to biochemically active neuroendocrine tumor excluded her from systemic treatment options. With the above-mentioned concerns, the patient and the treatment team decided on pursuing surgical avenues for removal of the lesion.

Multiple literature reports have demonstrated successful resection of posterior mediastinal tumors with minimally invasive surgical options such as VATS [4]. Ideal patients include right-sided lesions not extending into the spinal canal or into the cervical region as well as pre-operative imaging indicating benign tumors. Our patients' left-sided lesion near the descending aorta and esophagus would have made the VATS approach more challenging and the dissection more difficult. Alternatively, these lesions could have been approached using posterolateral thoracotomy, which carries high morbidity, including significant postoperative pain, prolonged hospital stay, and wound complications. Therefore, it was decided that this lesion could be approached in a minimally invasive fashion with robotic-assisted thoracoscopic excision. The extra degree of freedom afforded by robotic instruments would allow for easier dissection of the aforementioned structures in the left posterior mediastinum. The lesion was approached in a standard fashion with four 8 mm thoracoscopic ports placed in the second, fourth, and sixth intercostal spaces as depicted in Figure 2 with an additional assistant port laterally in the sixth intercostal space.

The posterior mediastinal structures, including the esophagus and aorta, were traversed, and the lesion was identified, which was a soft walled lesion abutting but not invading the thoracic vertebra (Figure 2). The lesion was aspirated with tan, yellow serous fluid emanating from the lesion allowing for easier en-bloc resection. Given the imaging findings indicating communication with the stellate ganglion accounting for her symptomatology, the area was injected with bupivacaine to avoid complications related to sympathetic excitation.

The patient tolerated the procedure well and was discharged home on postoperative day 2 with complete symptomatic relief. To date, she remains symptoms-free, has not required hospital admission, and has no indication of recurrence. 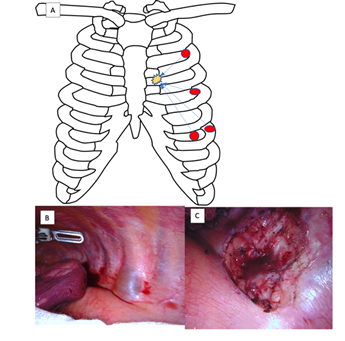 Figure 2: (A) Robotic Thoracoscopic 8mm port placements. Lesion (noted in gold) is triangulated for optimal degree of freedom and targeting; (B) Intra-operative finding of the posterior mediastinal mass abutting the thoracic vertebra; (C) Cyst was aspirated and was removed en bloc.

The final determination of the mass and its differentiation was confirmed by a dedicated thoracic pathologist. On hematoxylin and eosin stain, the mass showed a benign cystic lesion lined by ciliated columnar epithelium (Figure 3 (A-D)). Close examination of the cyst's magnified portions revealed a focal detached papillary structure lined with an attenuated low cuboidal to pseudostratified ciliated epithelium (Figure 3).

These findings decrease the likelihood of the most common culprits of posterior mediastinal masses, including esophageal duplication cysts, bronchogenic cysts, and paravertebral neoplasms. Nevertheless, to further characterize the origin of the lesion, the sample was analyzed using immunohistochemical stains, which demonstrated the lining cells are positive for PAX-8, Wilms Tumor-1 (WT1), estrogen (ER), and progesterone receptor (PR) (Figure 3 (E-H)), and negative for CDX2, Napsin A, TTF-1, and thyroglobulin.

Latter stains were performed to rule out common potentially metastatic lesions such as colonic adenocarcinoma, primary lung malignancy, and thyroid malignancy owing to her family history of papillary thyroid cancer. These results in unison are consistent with a benign Mullerian (Hattori) cyst.

Mullerian mediastinal tumors are very rare, and to date, there have been approximately 20 case reports described over the span of 15 years. The first description of similar lesions was described by Hattori and associates in 2005 in an 18-year-old female [2]. The cystic lesion was characteristically located between T3-T8 vertebrae with histopathological analysis depicting pseudostratified ciliated epithelium with estrogen and progesterone receptor positivity. Subsequent to this report, multiple groups retrospectively analyzed their posterior mediastinal cystic lesions to evaluate Mullerian mediastinal lesions' true incidence. Thomas-de-Montpreville et al found that 5.5% of the lesions (9 cases) exhibited similar histologic characteristics which was confirmed with immunohistochemical stains including PAX8 and WT1 which are key markers for Mullerian differentiation [3, 5].

Pre-operative diagnosis of these lesions is often difficult and should be a diagnosis of exclusion pending on specimen analysis as primary mediastinal neoplasms, particularly in the posterior mediastinum, have a much higher incidence. By nature of its location, the majority of the tumors, particularly congenital lesions, are neurogenic in nature, with almost 70% of them having a benign behavior. Cross-sectional imaging with multiplanar contrast-enhanced CT scan and gadolinium-enhanced MRI are useful in detecting the lesions, characterize behavior, and guide surgical planning. Although imaging may point to a more indolent process, those thought to be symptomatic secondary to mass effect or with concerning family history should undergo surgical exploration. Our patient has been experiencing life-altering and, at times, life-threatening complications secondary to the lesion's impingement on the sympathetic ganglion warranting a surgical approach, regardless of imaging findings. Overall, diagnosis of Hattori's cysts is rare and should be a diagnosis of exclusion in all cases as our understanding of the disease process is evolving. Nevertheless, as depicted in Table 1, these lesions share common characteristics, which include lesions between T3-T8 paravertebral spaces, females with the median age of 51, the median size of 2.7cm, and a largely asymptomatic nature.

Table 1: Common characteristics of Hattori cysts described in ~25 case reports in the literature.

Treatment options depend on institutional practice patterns and surgeon comfort. However, many experts agree that the lesions should be removed en-bloc to decrease the risk of recurrence and allow for adequate sample size for complete histologic analysis [6]. Historically, lesions in the left posterior mediastinum were managed with a posterolateral thoracotomy which allowed excellent visualization of the paravertebral space, the aorta, and the esophagus. With the advent of minimally invasive techniques, the practice patterns are changing, with many surgeons are becoming more proficient in the VATS approach for these types of lesions [4]. In fact, analysis of the literature of the Hattori cysts demonstrated an increasing trend for minimally invasive approaches compared to initial cases. Despite these encouraging trends, the use of robotically assisted surgery in this realm has been extremely limited, with one case report demonstrating its efficacy in managing similar lesions. We demonstrated that this is a viable option and that in experienced hands can alleviate the challenges presented in this anatomical location secondary to the additional range of motion offered with robotic thoracoscopic ports. Patients often have a significantly lower rate of peri-operative complications, including analgesic use, hospital stay, and pulmonary complications with smaller incisions without compromising the oncologic integrity of the operation. Our patient had an excellent recovery in this case and has returned to her normal activities within two months of the index operation.

Despite the increasing recognition of Mullerian differentiation of mediastinal cysts over the years, the presence of these lesions outside the female pelvis is rare, with skin and retroperitoneum being the most common extra-pelvic sites. While the etiology of Mullerian mediastinal cysts is unclear, various theoretical explanations have been proposed. Batt et al. have suggested the lesion is derived directly from the primary Mullerian apparatus, similar to Rokitansky-Kuster-Hauser syndrome [6]. Hattori et al. and Ludwig et al. have postulated that these lesions could represent misplaced tubal epithelium occurring during embryogenesis [2, 7]. As in our patient, Hattori's cysts fit the criteria for mullerianosis by demonstrating misplaced tissues with endosalpinginosis, endometriosis, and endocervicosis. According to the criteria devised by Young and Clement, tissues, regardless of the location, should have at least 2 of the 3 criteria to be considered misplaced Mullerian tissue [8]. Future studies are needed to further elucidate the exact etiology of mediastinal Mullerian which can offer insights into this extremely rare disease.

In conclusion, we detailed a rare case of a middle-aged woman with a posterior mediastinal Mullerian cyst with compressive effects on nearby stellate ganglion, causing symptoms suggestive of the sympathetic storm. These lesions should be evaluated by a dedicated thoracic and gynecologic pathologist for accurate diagnosis. Additionally, we demonstrated that these lesions could be managed using robotically assisted thoracoscopic surgery with minimal morbidity in experienced hands despite their challenging location. Thoracic surgeons and Gynecologists should consider these lesions in patients with appropriate clinical and demographic characteristics.