Septic tanks are simple onsite sewage facilities to settle and reduce solids and organics from domestic wastes by microbial processes. During this process, a mixture of sewer gases accumulates containing also hydrogen sulphide. This is of particular risk by its ability to depress the central nervous system and to rapidly cause unconsciousness [1] potentially resulting in aspiration of tank liquid and induction of pulmonary infections due to microorganisms. Calculated antibiotic treatment after incidents with liquid organic animal waste has so far focused on bacterial pathogens [2, 3]. We present a fatal case of an accident resulting in aspiration of domestic septic tank effluents.

Here, a 70-year old farmer plunged into the third reservoir of his biological septic tank and aspirated liquid. Brown liquid was recovered during bronchoscopy in the hospital the patient was initially admitted to. Developing a severe acute respiratory distress syndrome, the patient was transferred to the University Hospital Essen, a few hours after the incident. Antibiotic therapy with piperacillin/tazobactam was continued. Infiltrates in both lungs were detected in the chest CT scan. Macroscopic growth of moulds in the airways during bronchoscopy (Figure 1A) and increasing signs of (mucosal) inflammation were determined. Due to further deterioration, extracorporeal membrane oxygenation therapy and continuous venous-venous hemodialysis were started. Antimicrobial therapy was expanded by voriconazole after detection of fungal growth during bronchoscopy. The patient died three days after the accident in septic shock with multi-organ dysfunction. 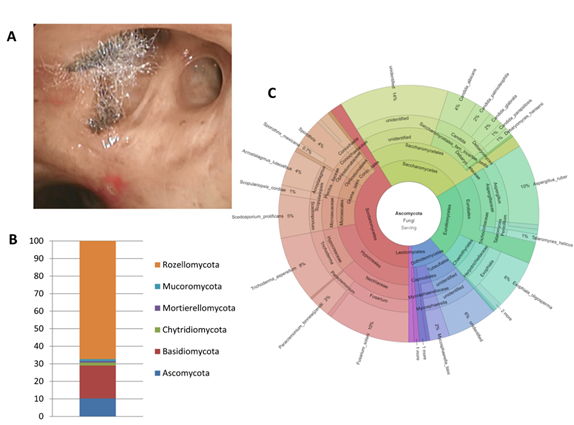 In this case, the detection of galactomannan from serum, which was negative at day of admission and increased to 6.0 index (threshold index 0.5) at day two after admission is a serologic indicator for an invasive fungal infection. BAL culture identified Aspergillus fumigatus, Lichtheimia ramosa, Lycoperdon umbrinoides, Mucor circinelloides and Trichoderma asperellum. Mycobiome analysis using NGS of ITS2-region from BAL revealed a high fungal phylogenetic richness with detection of six fungal phyla. Of 93,585 quality filtered sequences of the kingdom of fungi, 49.1% of the sequences could not be assigned to fungal phyla. Surprisingly, 67.3% of reads that were assigned to fungal phyla belonged to the phylum Rozellomycota (Figure 1B), an ancestor of the microsporidia [7]. About 18.8% of sequences that were assigned to fungal phyla were reads belonging to Basidiomycota and 10.2% to Ascomycota that are the dominating fungal phylum detected in the respiratory tract of healthy individuals. The phyla Mortierellomycota, Mucoromycota and Chytridiomycota exhibited 0.7% - 1.7% each of reads assigned to fungal phyla. Several fungal species or genera that have been reported to cause fungal infections in humans were detected by NGS for the phylum Ascomycota including Candida spp., Exophiala oligosperma, Aspergillus, Scedosporium prolificans and Fusarium solani (Figure 1C). Besides the risk of toxic gas inhalation, aspiration of septic tank effluents may cause severe lung infections. Guidelines for management of septic tank gas poisoning as well as case reports are scarce. Initial antimicrobial therapies of published slurry incidents have focused on bacterial pathogens [2, 3] and few reports have included fungal pathogens for initial antimicrobial therapy [8] taking into account that manure contains highly diverse bacterial and fungal communities depending on the animal species housed [9]. In this report, the combination of fungal growth seen during bronchoscopy with detection of serum galactomannan was indicative for a fungal infection. Clinical and serological findings in combination with the detection of several fungal pathogens from BAL by culture and NGS suggested that antimycotic drugs supplementing the anti-infective therapy may be advisable to prevent tissue inflammation and further infectious complications. Both were initiated in our case and its use has been reported in the literature [8].

Interestingly, a high proportion (67%) of reads that were assigned to fungal phyla belonged to the Rozellomycota that comprises the class Microsporidia, a group of unicellular intracellular parasites closely related to fungi. The phylum has a remarkable high biodiversity that is poorly characterized so far [7]. Although a high abundance of fungal reads were assigned to the phylum Rozellomycota, its relevance on local inflammation and complications for this case is unknown, as well as antiinfective treatment options. Unfortunately, autopsy was not performed to confirm invasive fungal infection and to further pathologically determine the relevance of the presence of the highly abundant fungi of the phylum Rozellomycota. Whereas L. umbrinoides causes hypersensitivity pneumonitis after inhaling of spores, members of the genus Trichoderma, important decomposers of decaying plant material, are an infrequent but emergent human pathogen [10]. Fungal infections with A. fumigatus, Lichtheimia spp. and Mucor spp. are frequently described in immunocompromised patients but they can occur also in previously immunocompetent patients undergoing surgery, critically ill patients or patients with co-infections (influenza virus or severe acute respiratory syndrome coronavirus 2) [11]. Furthermore, fungal pathogens that may cause severe infections in humans, were detected by NGS only and not by culture (Candida spp., Exophiala oligosperma, Scedosporium prolificans and Fusarium solani). Resulting from the variety of detected fungal species it is difficult to assign (the) most relevant fungal species and also to infer a targeted antifungal therapy. This is the first case of liquid aspiration from a septic tank reported in the literature using an NGS approach for detection of fungal pathogens from BAL.