Mystery of The Blue Toes

Chronic cold agglutinin disease (CAD) is a subgroup of autoimmune hemolytic anemia. The autoantibodies responsible for hemagglutination at low temperature, cold agglutinins, bind to erythrocytes and cause agglutination, which causes activation of complement and cold-induced circulatory symptoms. Essential clinical manifestation of primary CAD is hemolytic anemia and cold-induced circulatory symptoms [1]. CAD is rare to present as peripheral gangrene, and there are only a few published reports in the medical literature. We are reporting a case of peripheral gangrene, which was due to CAD.

Her admission vitals showed a temperature of 98o F, blood pressure 109/62, pulse 105 BPM, and oxygen saturation of 91% on a nonrebreather mask. The review of systems was unobtainable due to the patient's clinical status. Physical exam revealed cyanotic changes in both feet where toes were cold to touch with sharp demarcation at the metacarpophalangeal joint, although both dorsal pedis and tibial pulses were 2+ bilaterally. Refer to Figure 1 and 2. Initial laboratory findings included hemoglobin 10.1 g/dL, hematocrit 13.0 %, mean corpuscular volume (MCV) of 123 fL/cell.

Early in her admission, the laboratory discovered that her blood samples would agglutinate, producing lab results that were hemolyzed. Also, there was a mismatch between hematocrit and hemoglobin ratio, showing significantly lower than expected hematocrit level. From these observations, there was a high suspicion of CAD. Additional workup showed reticulocyte count of 3.7%, peripheral blood smear showing red blood cell (RBC) agglutination (refer to Figure 3), direct Coombs test positive for C3D and negative for IgG, total IgM level: 326 mg/dL. Mycoplasma IgG was positive; however, IgM was negative. The Hepatitis panel was negative. Serum protein electrophoresis showed a small monoclonal band in the gamma region, demonstrating IgM/Kappa identity. Urine protein electrophoresis showed no proteins. Diagnosis of CAD was made based on the above laboratory findings.

The patient was given a warmer and managed conservatively with avoidance of cold temperatures. Given the patients' multiple co-morbidities and poor functional status, it was elected to treat the patient with conservative medical management. Medical treatment included heparin drip and a trial of bilevel positive airway pressure. Cyanosis remained largely stable while on anti-coagulation. Hospital course complicated by worsening hypoxic respiratory failure. The health care proxy elected for comfort measures, and the patient ultimately expired. 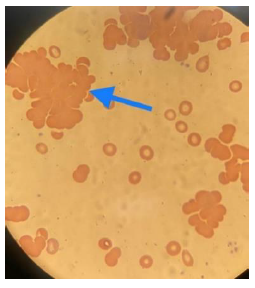 CAD is a type of autoimmune hemolytic anemia that occurs due to infections, malignancy, autoimmune diseases and paraproteins. This triggers the formation of pathological antibodies (most commonly IgM) that are directed against RBC surface [2]. The hemolysis is due to IgM binding to RBC surfaces leading to agglutination in the presence of a drop in blood temperature, which in terms leads to activation of complements cascade resulting in intravascular cell lysis. When warming of the blood occurs, IgM detaches from the cell surface resulting in agglutinated cells detaching from each other [3]. Pathophysiology of CAD depicted in Figure 4 [4]. Pathologic cold agglutinins occur in titers above 1:1000 and frequently react at 28-31°C and rarely at 37°C [5]. These high titers cause sludging of the RBCs resulting in cold and painful extremities (also known as acrocyanosis). 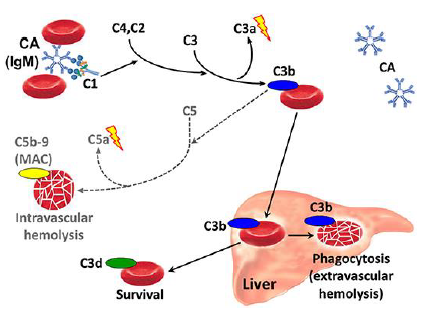 CAD has traditionally been classified into a primary or idiopathic type which has been regarded unrelated to underlying condition and has been associated with clonal B-lymphocyte proliferation, and a secondary type associated with malignant disease, most often lymphoma [6] or underlying infections [3, 7]. Diagnosis can be guided based on physical symptoms. Patients can present with cyanosis or reporting pain or discomfort upon exposure to cold. Signs of respiratory distress may be present. Very few cases have been published regarding gangrene in these patients. Patel M et al. explains a case of syphilis with existing cold agglutinin disease that led to peripheral gangrene [7]. Bachmeyer C et al. describes a patient who had T cell lymphoma cold-induced immune hemolysis that led to gangrene [6].

To confirm the diagnosis, laboratory results are crucial. A hemoglobin-hematocrit mismatch can be an important diagnostic clue on initial evaluation. The micro-aggregation of erythrocytes is counted as single cells and large clamps of cells are excluded from the count, which leads to decreased RBC count, falsely low hematocrit level, and elevated MCV [8]. An elevated reticulocyte count in response to the patient's anemia is common. Cold agglutinin titers are present in normal individuals, usually less than 1:64, with patients with CAD having amounts exceeding 1:2000 [9].

Due to the constant consumption, this may lead to a drop in complement levels. Positive Coombs test shows bound complement on erythrocytes. Diagnostic criteria for primary CAD depicted in Table 1. After a diagnosis has been made, the patient should be worked up for infection, lymphoma, and autoimmune disorders. Further testing can include serum electrophoresis, measurement of serum immunoglobulins, and flow cytometry of the bone marrow aspirate.

Modality of treatment of CAD depends on severity and character of underlying symptoms, degree of anemia and presence of underlying disease. Non-pharmacological management includes avoidance of cold exposure or infusion of cold liquids. Transfusions can be safely given when indicated, provided the necessary precautions are observed. Patients are usually not responsive to splenectomy or corticosteroids, and such modalities should be avoided [10]. Plasmapheresis is efficient as a "first-aid" in an acute situation in patients presenting with severe symptoms or before surgery; however, remission achieved is only short-lived [10]. There are have been no large trials to access the efficacy of plasmapheresis, and currently known data is based on case reports only. IVIG has been rarely used in CAD, and its efficacy is not well characterized. The only case reports data is available [11].

There is evidence that CAD is a clonal lymphoproliferative disorder (LPD) of the bone marrow, producing cold agglutinins, detected in blood or marrow without clinical or radiological evidence of malignancy [2]. That is the reason why B-cell-directed therapy became the main pharmacological therapy in the management of chronic symptoms of CAD. Rituximab has been studied as a single agent [12, 13] as well as in combination with Bendamustine or Fludarabine. When used alone, an overall response rate was 54%, with the median response duration of 11-13 months. Overall, treatment was well tolerated [13]. The Fludarabine and Rituximab is a very efficient combination with a response rate of 76% and 21% of patients achieving complete response (CR).

A majority of the patients tolerated the treatment well. However, there were observed cases of asymptomatic cytopenias. Few patients experienced reactivation of Herpes Zoster [14]. Chemoimmunotherapy with Bendamustine and Rituximab results in a high total response rate (71-78%), and the CR rate was nearly doubled compared with the fludarabine-rituximab trial (41% vs 21%), with response rate lasting for more than 88 months. The safety profile appears more favorable using bendamustine-rituximab than with the fludarabine-rituximab combination and may be considered as a first-line treatment for most patients with CAD requiring therapy [12, 15]. Bortezomib is an acceptable non-rituximab-based therapy for patients not able to tolerate alternatives [16]. The summary of pharmacological management of CAD is depicted in Table 2.

CAD remains a rare cause of peripheral gangrene; however, it should be considered when the most common causes of dry gangrene are excluded on initial workup and in the presence of characteristic laboratory findings. In the presented case, given the patient's age and past medical history, there was a high suspicion of PAD. However, the observation that her blood samples would agglutinate at room temperature, resulting in hemoglobin-hematocrit mismatch and need to be re-warmed, led to a diagnosis of CAD. In the case of this patient, peripheral blood sample agglutination likely related to secondary CAD due to the presence of monoclonal bands.