New Insights into The Pathogenesis of Intrabile Duct Ectopic Hepatocellular Carcinoma: A Case Report and Review of the Literature

Introduction: Intrabile duct ectopic hepatocellular carcinoma is an extremely rare clinical entity and its pathogenesis, as well as clinical features, are unclear.

Case Presentation: An 83-year-old man was identified with a tumor within the left hepatic duct upon abdominal computed tomography (CT) examination. The tumor, 40×20 mm, showed early enhancement in the arterial- and delayed-phase washout upon contrast-enhanced CT scaning. No tumor lesions were detected in the liver. Endoscopic retrograde cholangiography (ERC) demonstrated a round defect in the left hepatic duct, and biopsy results indicated adenocarcinoma. With a diagnosis of malignant intraductal papillary neoplasm of the bile duct, a left hepatic lobectomy was performed. The surgical specimen revealed an intraductal tumor protruding from the mucosal layer of the left hepatic duct. Histologically, the tumor showed features of poorly differentiated hepatocellular carcinoma without any invasion of the bile duct wall. The tumor was composed of cancer cells with no residual normal liver tissue around the tumor. The liver showed no findings of chronic liver disease or neoplastic lesions. The tumor was finally diagnosed as intrabile duct ectopic hepatocellular carcinoma. The proliferation of the peribiliary glands was evident in the left hepatic duct near the tumor, and the glandular epithelial cells were positive for CD56/NCAM, CD133, and SOX17 upon immunohistochemistry analysis, which is a marker for stem/precursor cells and transcription factors.

Although ectopic liver has been reported in various abdominal and extra-abdominal sites, ectopic hepatocellular carcinoma that grows in the bile duct, namely, intrabile duct ectopic hepatocellular carcinoma (IBDeHCC), is extremely rare. Therefore, the pathogenesis and clinical features of IBDeHCC remain unclear. Herein, we report a case of IBDeHCC that developed in the left hepatic duct, in which the resected specimen suggested that the tumor was of peribiliary gland origin based on the clinicopathological and immunohistochemical findings.

An 83-year-old man was identified with a mass of 40×20 mm in the left hepatic duct along with a mild intrahepatic biliary ductal dilatation upstream of the mass upon abdominal computed tomography (CT) examination during a regular check-up for asymptomatic cholecystolithiasis. The patient had a medical history of diabetes mellitus and asymptomatic cerebral infarction. He denied a history of alcohol abuse. Laboratory examination revealed a normal complete blood count and comprehensive metabolic panel, except for an elevated hemoglobin A1c level of 7.7%. Levels of tumor markers, such as CA19-9 and CEA, were within the normal limits. Since hepatocellular carcinoma was not suspected, serum AFP and PIVKA-II levels were not examined. Serological markers of hepatitis virus, including hepatitis B virus antigen (HBsAg), hepatitis B surface antibody (HBsAb), and anti-hepatitis C virus antibody (‎anti-HCV)‎ were not detected. The mass appeared round on contrast-enhanced CT scan, occupying the lumen of the left hepatic duct, and demonstrated an early enhancement in the arterial- and delayed-phase washout in the portal venous and equilibrium phases (Figure 1). Primary hepatic parenchymal lesions were not observed. The mass showed hypointensity upon T1-weighted magnetic resonance imaging (MRI) and mild/moderate hyperintensity in T2-weighted images. Endoscopic retrograde cholangiography (ERC) revealed a round defect in the left hepatic duct (Figure 2), and the biopsy results were highly suggestive of adenocarcinoma. There were no abnormal findings in the papilla of Vater. Upon preoperative diagnosis of malignant intraductal papillary neoplasm of the bile duct (IPNB), the patient underwent left hepatic lobectomy and resection of the left caudate lobe along with lymphadenectomy around the hepatoduodenal ligament. It should be noted that the patient underwent laparoscopic cholecystectomy before hepatic resection because he developed acute cholecystitis during a thorough examination of the biliary tumor.

The resected specimen revealed a well-defined, whitish-yellow round tumor in the left hepatic duct (Figure 3). Histologically, the tumor showed an intraductal growth protruding from the mucosal layer of the left hepatic duct with no invasion into the bile duct wall (Figure 4a, b). The tumor consisted of hepatocyte-like tumor cells with round nuclei of different sizes forming an indistinct cord-like structure and solid proliferation without clear boundaries (Figure 4b), which were compatible with the diagnosis of poorly differentiated hepatocellular carcinoma. No normal liver tissue was observed around the tumor. Lymphovascular invasion was not detected. Tumor cells were positive for hepatocyte paraffin 1 (Hep Par 1) and Arginase-1 (Figure 4c) and negative for CK7, CK17, CK20, EMA, and AFP upon immunohistochemical staining. Finally, the tumor was identified as an IBDeHCC. The proliferation of peribiliary glands was observed in the left hepatic and intrahepatic bile ducts near the tumor (Figure 5). The glandular epithelial cells demonstrated membranous and cytoplasmic immunopositivity for CD56/NCAM and CD133 and nuclear immunopositivity for SOX17 (Figure 6), while tumor cells were negative for these markers. The mother liver showed no evidence of chronic liver disease or neoplastic lesions on macroscopic and microscopic aspects. The postoperative course was uneventful, and the patient was discharged 19 days after surgery. At the 23-month follow-up after surgery, the patient remained well without recurrence or newly developed liver tumor with normal serum AFP of 1.3 ng/mL and PIVKA-II levels of 14 mAU/mL.

Figure 1: Axial contrast-enhanced CT image demonstrating a 40×20 mm round mass in the left hepatic duct (arrow) with mild dilatation of the intrahepatic bile duct (arrowhead). The mass showed early enhancement in the arterial- (a) and delayed-phase washout in the portal venous phase (b). 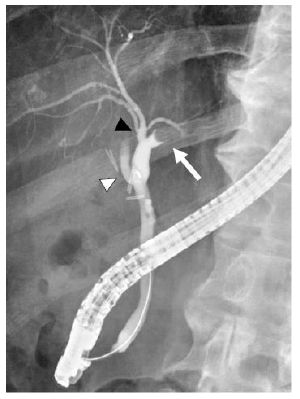 Figure 2: An endoscopic retrograde cholangiography (ERC) depicting a round defect in the left hepatic duct (arrow). In this patient, there was separate drainage of the anterior (black arrowhead) and posterior (white arrowhead) sectoral ducts into the common hepatic duct.

Figure 3: The surgical specimen demonstrating a well-defined, whitish-yellow round tumor (circle) in the left hepatic duct (a). Magnification of the tumor (b). 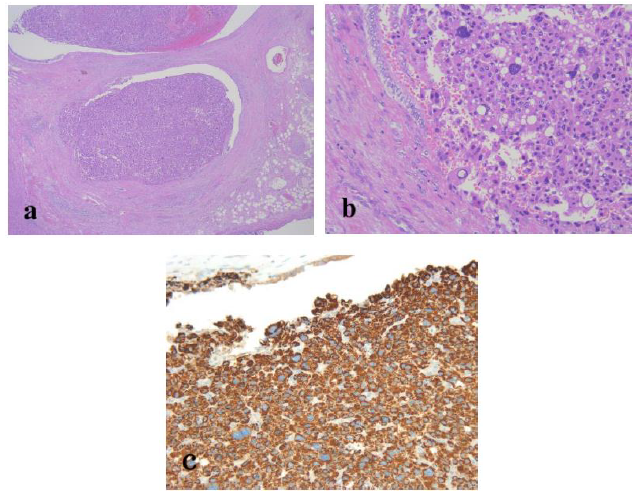 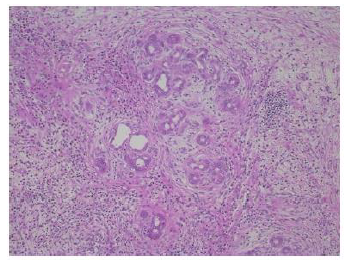 Figure 5: The peribiliary glandular proliferation was remarkable in the left hepatic duct nearby the tumor (original magnification, ×100, hematoxylin and eosin staining).

Here, we reported a case of an 83-year-old man with IBDeHCC, which is incredibly rare. Ectopic livers can arise at various sites in both abdominal and thoracic cavities, such as the gallbladder, pancreas, spleen, omentum, adrenal gland, and diaphragm [1], while they are usually detected by chance at laparotomy, laparoscopy, or during an autopsy due to lack of specific signs or symptoms. The incidence of the ectopic liver is reportedly 0.24% in autopsy cases [2] and 0.47% in laparoscopic surgeries [3]. Ectopic hepatocellular carcinoma arising in extrahepatic organs or tissues is even rarer. IBDeHCC with no primary hepatic parenchymal lesions is an extremely unusual clinical entity and only 13 cases, including our case, have been documented [4-13]. The clinical characteristics of these patients are summarized in Table 1. There are ten men and three women, with a median age of 62 years. All patients presented with jaundice, except for two cases, including our patient. The most common site of IBDeHCC is the extrahepatic bile duct, including the common bile duct and the common hepatic duct in eight cases. Both extrahepatic and intrahepatic bile ducts were involved in four cases. In the remaining patient, the tumor was located in the right anterior sectoral duct. These tumors showed an intraductal growth elongated along the lumen of the bile duct with a long-axis tumor diameter of 8-50 mm. Based on the available information, three patients were indicated to have abnormally high serum AFP levels. Four of the five patients with hepatitis virus infection showed cirrhosis of the mother liver. Surgical removal of the tumor was performed in all patients, including tumor removal through choledochotomy, extrahepatic bile duct resection, and major or partial hepatic resection with/without extrahepatic bile duct resection in four, four, and five patients, respectively. Five patients showed an early recurrence within 6 months after surgery, and three of them died of the primary disease. Only four patients, including the case presented here, survived more than 12 months after surgery without recurrence.

The pathogenesis of IBDeHCC remains unclear. Three theories have been postulated to explain the origin of IBDeHCC as follows [6-8,10-13]: (1) Migration of cancer cells from an undetectable or occult primary hepatocellular carcinoma in the liver; (2) hepatocarcinogenesis within an intrabile duct ectopic liver; (3) tumorigenesis from biliary epithelium or intramural cells of the bile duct. An accumulation of 13 cases with IBDeHCC revealed that almost half of the patients had an extremely poor prognosis with early recurrence even after the surgery, as shown in Table 1, suggesting that some of these cases presenting with early recurrence might also include an undetectable or occult hepatocellular carcinoma in the mother liver. In the aspects of embryonic development, the anlage of the liver, extrahepatic bile duct, gallbladder, and ventral pancreas appears in the ventral wall of the primitive midgut at the 4th week of the human embryo [14, 15]. It is suggested that the liver tissue can migrate to various organs during embryogenesis, which may result in ectopic livers [16] and IBDeHCC may derive from an ectopic liver in the bile duct. Ordinarily, hepatocellular carcinoma develops in the setting of known risk factors including chronic hepatitis virus infections and cirrhosis, but only one-third of the patients with IBDeHCC were positive for hepatitis virus markers and had chronic liver disease, as shown in Table 1. Some authors have suggested that the ectopic liver is more susceptible to hepatocarcinogenesis than the mother liver, probably because it lacks a complete functional architecture sufficient to metabolize carcinogenic entities [17-19]. Meanwhile, most ectopic hepatocellular carcinomas lack non-cancerous liver parenchyma adjacent to the tumor [20, 21], except for a few cases [1, 22]. Although only a few authors noticed the residue of normal liver tissue around the IBDeHCC, our patient showed the absence of normal liver parenchyma in the tumor, similar to the case reported by Yigit et al. [10]. When an IBDeHCC is derived from the ectopic liver, some residues of non-cancerous liver parenchyma persist around the tumor. In contrast, recent studies have identified that niches of multipotent stem/progenitor cells with a considerable potential to differentiate into either hepatocytes, cholangiocytes, or neoislet-like clusters are present in the peribiliary glands of the biliary tree in addition to the canals of Hering [23, 24].

These biliary multipotent cells participate in various cholangiopathies, including cholangiocarcinoma and IPNB, as well as the renewal of the biliary epithelium [23, 25-28]. The peribiliary glands communicate with the bile duct lumen through small canals and lie not only in the large intrahepatic bile ducts but also in the extrahepatic bile duct [29-31]. as observed in the present case. The stem/progenitor cells in the peribiliary glands express endodermal transcription factors, such as SOX9, SOX17, FOXA2, PDX1, HES1, NGN3, and PROX1, intranuclearly, as well as stem/progenitor surface markers, such as EpCAM, CD56/NCAM, CD133, and CXCR4 [23]. The clinicopathological characteristics of IBDeHCC in our patient were as follows; (1) The tumor showed an intraductal growth arising from the mucosal layer of the left hepatic duct without any primary neoplastic lesions in the mother liver in both macroscopic and microscopic aspects; (2) the tumor was composed of cancer cells with no residue of the normal liver parenchyma around the tumor; (3) proliferation of peribiliary glands with positive staining for CD56/NCAM, CD133, and SOX17 was remarkable in the bile duct near the tumor; (4) chronic hepatitis virus markers were all negative; (5) the mother liver had no findings of chronic hepatitis or cirrhosis; (6) the patient remained well 22 months after surgery without recurrence or newly developed liver tumor. Based on these findings, we speculated that the peribiliary gland was the cellular origin of IBDeHCC in our patient.

We encountered an extremely rare case of well-defined IBDeHCC without any relevant clinical symptoms. Although further case accumulation and multi-perspective analysis of IBDeHCC in terms of embryology, pathology, and cellular and molecular biology are needed to draw a firm conclusion, we propose the involvement of peribiliary glands in the pathogenesis of IBDeHCC.

The authors declare no conflicts of interest associated with this manuscript.