No Laughing Matter: A Case of Diffuse Alveolar Damage in a Young Nitrous Oxide User

Nitrous oxide (N2O; laughing gas) is an odourless, colourless gas. It is clinically used as an anaesthetic agent, as a propellant for whipped cream and in the automotive industry to enhance engine performance [1]. However, in recent years, recreational use of N2O has more than doubled [2]. The inhalation of N2O causes rapid onset of euphoria and relaxation. Side effects of N2O include transient dizziness, dissociation, loss of balance and impaired memory and cognition. With heavy and persistent use, inactivation of vitamin B12 can occur causing numbness in extremities progressing to peripheral neuropathy, subacute combined degeneration of the spinal cord and megaloblastic anaemia [3]. Diffusion hypoxaemia can occur during or immediately after N2O inhalation. This occurs because N2O enters the alveoli far more rapidly than nitrogen exits, resulting in dilution of oxygen in the alveoli [4]. Fatalities due to hypoxia have been reported [5]. Furthermore, in combination with other sedatives, hypnotics or opioids, N2O can potentiate respiratory depression [6]. In medical practice, nitrous oxide is administered via mask during tidal breathing, in combination with a controlled supply of oxygen to avoid hypoxaemia. For recreational use, the N2O is either discharged from the N2O cartridge (nang, bulb or whippet) into a balloon and then inhaled, or inhaled directly from the nang or the nozzle of a whipped cream dispenser - without the cream. Inhalation directly from the nozzle or nang means that the gas is under considerable pressure, which may cause intra-alveolar rupture [7]. Nitrogen dioxide, another oxide of nitrogen, is a proven pulmonary irritant causing increased airway reactivity, diffuse inflammation, altered surfactant chemistry and metabolism and epithelial hyperplasia of terminal bronchioles and pulmonary oedema at higher doses [8]. To our knowledge, recreational use of nitrous oxide has not previously been reported to cause diffuse lung injury in Australia.

A 27-year-old woman with no prior lung disease presented to the Emergency Department with a one-week history of worsening productive cough, rigors and rapidly accelerating breathlessness. Her medical history was notable for depression, bipolar disorder, drug abuse and self-harm. On arrival, oxygen saturation were 75% on room air, she was significantly tachypnoeic with a respiratory rate of 48 breaths per minute and tachycardic with a heart rate of 135 beats per minute. Her BP was 112/59. She was cyanosed and confused. Blood tests revealed a normal white cell count with elevated C-reactive protein of 190mg/L and lactate was 5.6mmol/L. Arterial blood gases were consistent with hypoxic respiratory failure (pH 7.32, pO2 60mmHg, pCO2 55mmHg, on 40% FiO2). Electrolytes and liver function were unremarkable. Initial Chest X-Ray (see Figure 1 below) revealed bilateral patchy mid to lower zone opacification. A provisional diagnosis of community acquired pneumonia was made and she was commenced on guideline based IV antibiotics and fluid resuscitation was commenced. Her condition deteriorated rapidly requiring intubation in the ED. 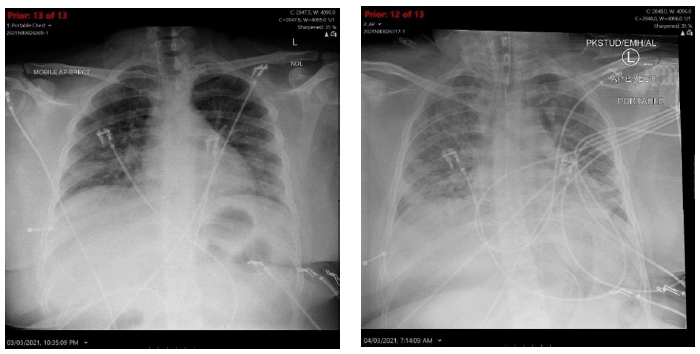 Transthoracic echocardiogram suggested normal chamber sizes and ventricular function. Autoimmune screening was negative. Hepatitis and HIV screening tests were negative. Urine drug screen for amphetamines, benzodiazepines, marijuana, cocaine, and methadone was also negative. While she was in the Intensive Care Unite (ICU), a collateral history from family and friends suggested she had appeared frequently dazed and vague in the weeks prior. A search of the patient’s belongings (with the family’s consent) revealed that she had been using nangs prior to admission. The nitrous oxide was being inhaled via balloons as well as directly from the nozzle of a whipped cream dispenser (see Figures 2 and 3). The box of 10 canisters in her bag had only one nang left. 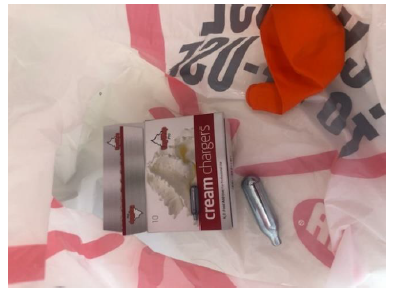 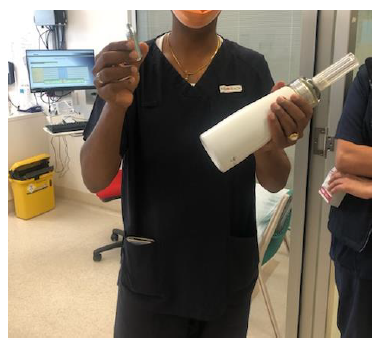 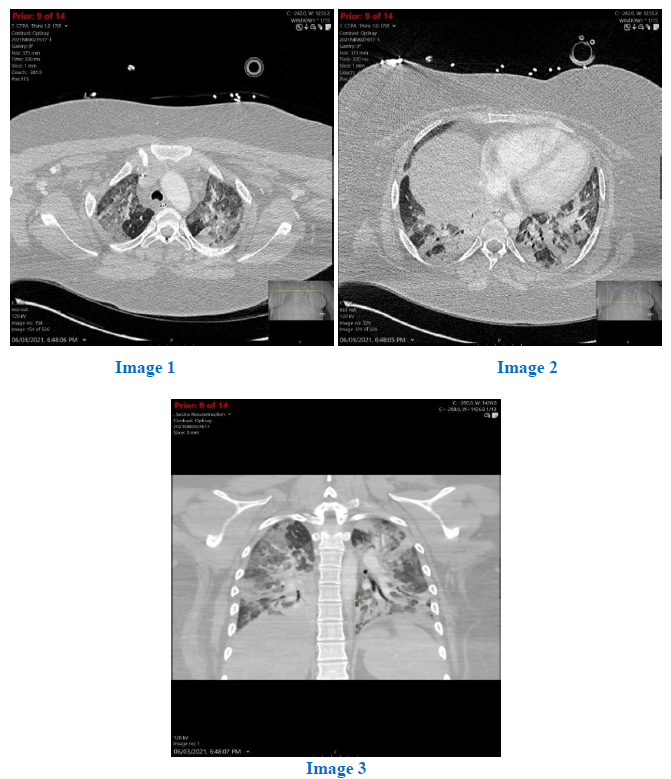 The patient remained intubated and ventilated for 18 days due to both ongoing high FiO2 requirements and agitation. Her ICU admission was further complicated by thrombosis of the left internal jugular central venous line, and Staphylococcus aureus bacteraemia requiring 4 weeks of IV cefazolin. Following extubation, the patient reported that she had regularly consumed five or more standards of alcohol and used 25 to 30 nangs per day in the weeks leading up to her admission. At the time of discharge (day 44) this patient could mobilise an unlimited distance on flat ground without desaturation. All the Chest X-ray abnormalities had resolved.

Based on the patient’s clinical history, CT findings and blood test results, it was concluded that this was a case of diffuse alveolar injury from nitrous oxide inhalation. The CT findings (Figure 4) of diffuse airspace opacification which was not airway-centric, and the lack of focal consolidation on initial chest X-ray were more consistent with an acute lung injury with diffuse alveolar damage from an extrinsic cause rather than severe atypical pneumonia or aspiration pneumonitis. The patient’s clinical history of nitrous oxide inhalation, the rapid progression to acute respiratory distress syndrome (ARDS) as well as the absence of any putative organisms cultured at bronchoalveolar lavage also support this conclusion. Her significant hypoxaemia and respiratory failure on admission was thought to be at least partly a result of nitrous oxide induced diffusion hypoxaemia and respiratory depression.

There has been one other similar case report of a 20-year-old male from Auckland presenting with chest pain, fevers, tachypnoea, tachycardia, sputum production and hypoxia after inhalation of nitrous oxide. Chest radiograph revealed bilateral infiltrates and sputum MCS showed MRSA. He progressed to hypoxic respiratory failure and ARDS [9]. A careful history of potential inhalation insults should include recreational N2O. Nangs are cheap, legal and potentially lethal.