A paradoxical response is a clinical or radiological deterioration of existing or new lesions in tuberculosis patients following treatment. Female gender, HIV infection, length of illness are all known potential risk factors. However, the likelihood of developing a paradoxical response with a concurrent infection of COVID-19 is scarcely reported in the literature, as the circumstance with our patient. In this report, we discuss the case of a 21-year-old woman, at 39 weeks gestation, who presented to the OPD with complaints of headache, coughing, nausea, and abdominal pain. RT-PCR was positive for COVID-19, and radiological imaging was consistent with the diagnosis of Miliary Tuberculosis, further complicated by tuberculous meningitis. Our study aims to highlight the paradox of TB progression in an obstetric patient with prior history of treated TB, coupled with the risk factors associated with a paradoxical reaction.

A paradoxical response is a clinical or radiological deterioration of existing or new lesions of tuberculosis (TB) patients following treatment. These phenomena are particularly prevalent in TB-affected lungs, central nervous system (CNS), and lymph nodes [1]. Choremis and his colleagues first identified a paradoxical response to imaging findings of a child treated for TB in 1955 [2]. Paradoxical reaction in a patient with CNS TB was first described by Thrush and Barwick in 1974 [3].

The clinical or radiological worsening associated with such a reaction may lead to erroneous conclusions about drug resistance or treatment failure, prompting a search for a different diagnosis. Case reports and limited case series have mainly been used to explain paradoxical reaction manifestations, including clinical manifestations, imaging, and CSF findings. Lymphocytic pleocytosis, polymorphonuclear predominance, or a rise in protein levels are all possible changes in CSF. Corticosteroids have been shown to be effective; hence the paradoxical reaction does not necessarily indicate treatment failure [5-7].

A 21-year-old woman, G1P0, at 39 weeks gestation, has presented with cough, headache, nausea, abdominal pain. She has been previously treated for tuberculosis 2 years ago. The patient was afebrile and had an arterial blood pressure of 135/80 mmHg, a heart rate of 111beats/min, respiratory rate of 32 breaths/min, and oxygen saturation SpO2=96% on room air. D-dimer was 1.3 μg/mL, other routine laboratory examinations were within normal limits.

Her neurological examination, including cranial nerves, motor, sensory and cerebellar examination, were within normal ranges. Chest auscultation revealed bilateral crepitation with bronchial breathing on the right side. Oropharyngeal throat swab sample yielded a positive result for COVID-19, detected by real-time reverse-transcriptase–polymerase-chain-reaction (RT-PCR) assay. Chest x-ray revealed cavitation at the upper lobe of the right lung with small nodules bilaterally in a random distribution with a suspect of military tuberculosis. Brain MRI was ordered which demostated FLAIR sequence hyperintensity in thalamus, T1 weighted image hypointense lesion without contrast enhancment while presenting water diffusion restriction in DWI/ADC hereby findings indicated late subacute ischemia. Axial T1 weighted images demostrated multiple small sub centimeter size nodular and ring enhancing lesions that were corresponding to tuberculomas in cerebellum. Also T1 weighted image demonstared contrast enhancment in the quadrigeminal cistern and the ambient cisten that correspond to tuberculomas. No presence of other supratentorial lesions were observed other than ischemia at this time.

Given the progression of disease, at 39w6d (hospital day 6), the fetal heart rate monitoring found acute fetal distress, and as result an urgent cesarean section was performed. Male baby was born with an Apgar scores of 3 and 5 after 1 and 5min, respectively, and birth weight was 1250g. Newborn presented with respiratory effort, which manifested by apnea (deep, intermittent, slow, spasmodic inspiratory efforts) and the successful resuscitation was established. However, despite resuscitative measures, the baby died of respiratory failure on Day-2 of hospitalization.

The patient’s status deteriorates post-partum (hospital day 8) which presented with somnolence, seizure, a temperature of 38.3, T/A 135/80, PP 111mmHg, SpO2=90%, with positive meningeal signs. The patient suffered 2 post-partum seizures over a period of 2 hours. Seizures were characterized by generalized muscle spasm, that terminated spontaneously, on examination immediately after the seizure she appeared post-ictal without focal neurological deficits. Treatment with intravenous magnesium sulphate infusion was added to prevent further convulsions. Lumbar puncture was performed, and the diagnosis of tubercular meningitis was suspected.

Second brain MRI was orderd after 7 weeks of treatment therapy which demostrated exarcibation of the tuberclulomas where FLAIR axial image and T1 weighted image post constrat presented the increased number and size of tuberculomas in cerebellum. It was also evident in T1 weighted images post contrast enhamcent that this time were more massive with increased inflamation in the quadrimenal cistern and the ambient cistern, many confluent and distinct lesions around suprasellar cistern left tentorium were demonstared. New sub centimer sized lesions were also present in supratentorium. Based on these findings we diagnosed these lesions as an onset of post treatment paradoxical reactions.

Accordingly, we prescribed the administration of corticosteroids (prednisolone, 30 mg/day, 0.6 mg/kg/day) which will be gradually tappering off. After 3 months of the corticosteroid treatment, the tuberculomas reduced and we tappered the dosage of prednisolone to 5 mg/day. The patient is in ongoing treatment. 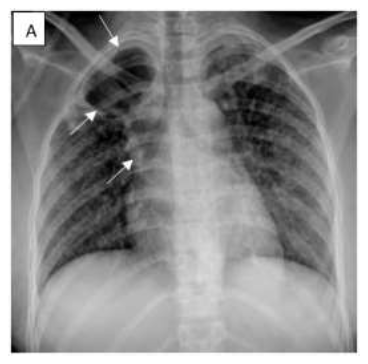 Figure 1: PA chest radiograph shows a right cavitary lesion (white arrows) accompanied by drainage on the corresponding side (white arrowhead). Small nodules are present bilaterally in a random distribution with a suspect of military tuberculosis. 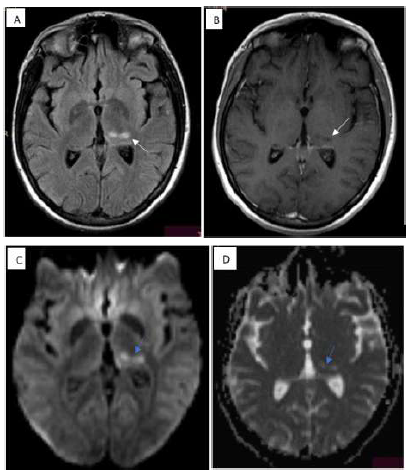 Figure 3: Axial T1 weighted images (A and B) presents multiple small sub centimeter size nodular and ring enhancing lesions with tuberculomas in cerebellum (White arrows).T1 weighted image (C) ( white arrowhead) demonstares contrast enhancment in the quadrigeminal cistern and the ambient cisten that correspond to tuberculomas. No presence other supratentorial lesions were observed other than ischemia. 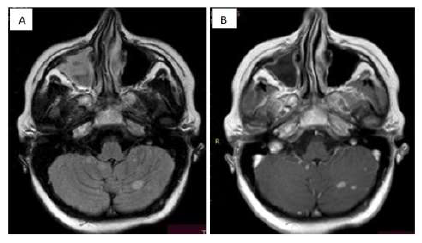 Figure 4: FLAIR axial image (A) and T1 weighted image post constrat (B) presenting the increased number and size of tuberculomas in cerebellum. 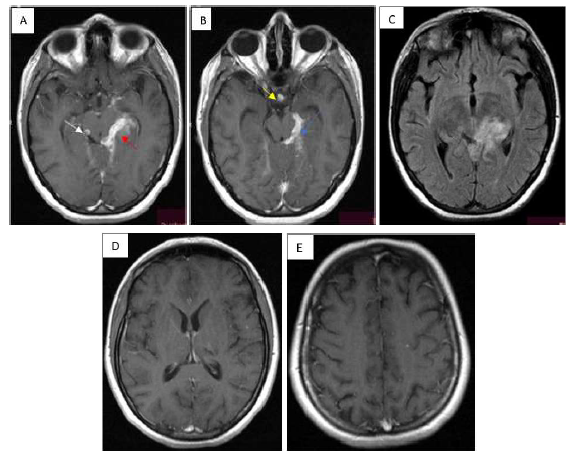 The present study is probably the first case report of paradoxical tuberculosis tuberculoma with meningoencephalitis and concurrent SARS-CoV2 in a pregnant woman. The paradoxical response occurs as a delayed hypersensitivity reaction due to the release of mycobacterial proteins into the subarachnoid space and the tuberculoma. This leads to an inflammatory cascade which further contributes to the expansion of the tuberculoma, edema, vasculitis, and infarction. A highly suggestive sign of meningoencephalitis is the increase in lymphocytic pleocytosis or polymorphonuclear cells which paradoxically occurs due to the administered therapeutics. This may occur due to the subarachnoid tubercles (Rich’s foci) in the meninges that expand readily and break down into the subarachnoid space. As with our case report above, the paradoxical response occurs many weeks after the treatment initiation and is often accompanied by clinical deterioration of patients. In the literature, paradoxical response has been reported to occur anywhere from 2 weeks to 18 months post initiation of anti-tuberculosis treatment.

The medical community has not reached an agreement on the appropriate management strategy for paradoxical tuberculomas. While some patients, like the one discussed in this report, respond to anti-tuberculosis therapies alongside systemic steroids, others may require second-line agents (due to resistance), or even neurosurgery. The justification for using steroids is to dampen the pro-inflammatory effects that follow the release of M. Tuberculosis bacilli. The improvements seen with the use of corticosteroids may be due to the reduction in cerebral edema and/or vasculitis. It is important to note that a paradoxical response does not warrant a change in the drug regimen or rather the assumption that the organism has developed drug resistance. If in resource poor setting where drug susceptibility testing is not a possibility, considering the addition of second-line agents (i.e levofloxacin and ethionamide) on top of the current regimen can be considered.

Surgical interventions are not used often, but when they are utilized, it is either for the treatment of acute complication (eg. Hydrocephalus), or confirmatory diagnosis of non-responsive lesions. The former may be treated with shunting procedures, and the latter via a stereotactic biopsy of the suspected tuberculoma. However, invasive diagnostic testing is not undertaken unless patient has not had any response to therapy for 8 weeks or longer. Some tuberculomas may cause mass effect and severe symptoms, in which case a neurosurgical decompression may be considered for relief of symptoms.

Physician must monitor and recognize early signs of paradoxical response. Early intervention with the appropriate therapeutics and neuroimaging may be life-saving and prevent further neurological damage. The same treatment regimen should continue when paradoxical response is recognized, and this should not be labeled as a new or resistant infection. Systemic corticosteroids may be added, or if already part of the treatment regimen, its dose may be increased to acquire the desired response. Lastly, if medical interventions fail to generate clinical improvements, neurosurgical interventions may be considered.

About one-third of tuberculous meningitis patients experience clinical or radiological worsening of pre-existing lesions, or the emergence of new lesions following treatment is known as the paradoxical reaction. Female gender, concurrent HIV infection, and a shorter illness span were all major predictors. The existence of COVID-19 can be a risk factor for this reaction. Paradoxical responses may not have a negative impact on treatment strategy and outcome.