Venlafaxine is a serotonin norepinephrine reuptake inhibitor thought to have little effect on glucose metabolism. However, hypoglycemia in venlafaxine overdose has been described in a paucity of case reports, and we present a unique case of venlafaxine induced hypoglycemia complicated by malnutrition and concomitant alcohol intoxication. A 29-year-old male presented to the emergency department after a venlafaxine XR overdose and concomitant alcohol intoxication. He was admitted to the ICU with serotonin syndrome, found to be hypoglycemic, and started on intravenous dextrose. Despite clinical improvement over a few days, and being reinitiated on an oral diet, the patient’s glucose remained low. 65 hours after ingestion of the venlafaxine, subcutaneous octreotide was administered and the hypoglycemia resolved. We suggest early and repeated measurements of blood glucose in patients presenting to the emergency department and ICU with overdose ingestions, and to maintain a multifactorial approach to the etiology of any resultant hypoglycemia.

Selective serotonin reuptake inhibitors (SSRIs) and serotonin norepinephrine reuptake inhibitors (SNRIs) are the mainstay of pharmacologic therapy for numerous psychiatric conditions. An epidemiologic study of antidepressant overdose in the United States showed a rise in overdose rates from 1983 to 2003, primarily from an increase in SSRI ingestion [1]. Therapeutic and overdose quantities of these medications can cause psychotropic emergencies, the most serious of which is serotonin syndrome, often resulting in ICU admission [2].

At a therapeutic dose, common side effects of antidepressants include sexual dysfunction, sleep disturbance, and weight gain [3]. SSRIs have also been described to play a role in glucose metabolism through serotonergic pathways resulting in hypoglycemia [4]. SNRIs have an additional counter effect on glucose metabolism through the norepinephrine pathway, and were therefore thought to have no net effect on glucose metabolism [5]. Despite this, there have been limited case reports in Europe describing hypoglycemia in the context of overdose with venlafaxine, an SNRI [6-8]. While mechanisms have been proposed, the pathophysiology of this phenomenon is still poorly understood. Here, we present a unique case of venlafaxine associated hypoglycemia persisting for 65 hours post ingestion.

A 29-year-old, previously healthy male presented to the emergency department 1.5 hours after a suicide attempt with ingestion of 2.5 g of venlafaxine XR and concomitant alcohol intoxication (ethanol level 58 mg/dL). At triage, the patient had a temperature of 36°C, heart rate (HR) of 103, blood pressure (BP) of 129/81, respiratory rate (RR) of 20, was saturating well on room air, and had a blood glucose of 5.0 mmol/L. Initially, he was alert and conversing appropriately with the emergency physician with a Glascow Coma Scale (GCS) of 15. Since he presented more than 30 minutes from time of ingestion, activated charcoal was initially not given. Four hours after presentation, the patient became agitated, tachycardic (HR 127), tachypneic (RR 40), and had an acute decompensation in level of consciousness to GCS of 8 resulting in intubation. He was maintained on a propofol and midazolam infusion.

On presentation to the ICU, the patient manifested neurological symptoms fulfilling the Hunter Toxicity Criteria Decision Rules for Serotonin Syndrome [9]. He was agitated, diaphoretic, and hyperreflexic throughout, with ocular clonus, and inducible clonus in the lower extremities. Based on the ingestion of extended release venlafaxine, 50 g of activated charcoal was administered. Although warm to touch, the patient never developed pyrexia, and his vital signs stabilized with benzodiazepines and supportive care. Cyproheptadine was not given. Blood glucose measured 7 hours after ingestion was found to be low at 3.4 mmol/L (reference during fasting, 3.9 – 5.5 mmol/L). The patient was treated with 50 mL of 50% dextrose followed by a continuous 5% dextrose infusion.

Other initial investigations including complete blood count, electrolytes, liver and kidney function were all within normal ranges. The alcohol level was elevated at 58 mg/dL. Acetaminophen and salicylate levels were negative. Urine toxicology screen was negative for cocaine, amphetamines, opiates, barbiturates, oxycodone, and methadone. Based on a well-documented clinical history of venlafaxine overdose and clinical criteria for serotonin syndrome was met, a venlafaxine level was not drawn.

While intubated, enteral nutrition was initiated which resulted in several electrolyte abnormalities typically associated with re-feeding syndrome in a malnourished patient. These were corrected. Within 24 hours of ICU admission, the clinical manifestations of serotonin syndrome resolved. The patient was then weaned safely off sedation and was extubated with no complications.

Interestingly, throughout this time, the patient continued to require a 5% dextrose infusion, which was increased to a 10% solution to minimize the volume given, along with five additional 50 mL boluses of 50% dextrose to maintain his blood sugars. Although being started on an oral diet and eating well, this requirement of IV dextrose persisted. The patient confirmed he had no history of diabetes, and had no access to insulin or oral hypoglycemic agents. At 57 hours after ingestion, capillary blood glucose dropped to 4.4 mmol/L. At 65 hours after ingestion, a decision was made with the patient’s consent to try two 50 mcg subcutaneous injections of octreotide, administered as previously described in a similar case report, 5 hours apart [7]. The dextrose infusion was discontinued 2 hours after the first 50mcg injection of octreotide as the blood glucose rose to 11.5 mmol/L. A second dose was given 5 hours later, and there was no recurrence of hypoglycemia over 24 hours of additional observation (Figure 1). The patient was discharged with no concerns 4 days after initial presentation. 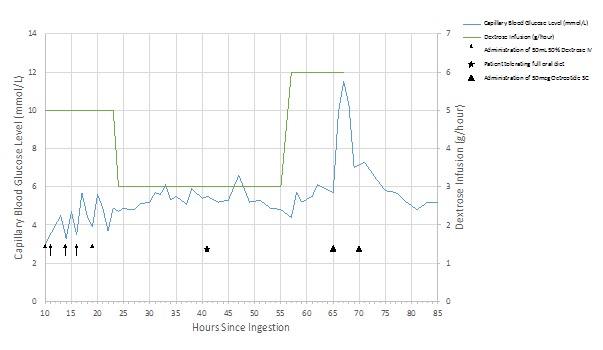 Figure 1: Capillary blood glucose and dextrose requirements before and after octreotide administration.

Venlafaxine is an antidepressant with a mechanism of action whereby both serotonin and norepinephrine reuptake is inhibited. A case-control study showed, when compared to benzodiazepines, primarily serotonergic antidepressants are associated with hypoglycemia and primarily noradrenergic antidepressants with hyperglycemia [4]. Khanam et al. demonstrated venlafaxine did not alter glucose levels in vivo, confirming previous preliminary reports of dual-mechanism SNRI antidepressants having balanced glucose metabolism [5, 10]. However, there have been three published case reports of hypoglycemia associated with venlafaxine overdose [6-8]. One of the three cases was treated with two 50 mcg subcutaneous octreotide injections to resolve the hypoglycemia at 24 hours post-ingestion [7], and the other two cases resolved without intervention at 30 and 40 hours post-ingestion respectively [6, 8].

In these case reports, one proposed mechanism includes a direct serotonergic effect on increasing serum insulin concentrations as has been described in mice, while another proposed mechanism described serotonergic effects on insulin-independent mechanisms through mu-opioid receptors resulting in increased glucose uptake by muscle cells as seen in rats [11, 12]. The patient confirmed he did not have access to any oral hypoglycemic agents or exogenous insulin. From this, we suspect, the most likely etiology of the patient’s hypoglycemia is due to the serotonergic effects of venlafaxine on increasing endogenous insulin secretion and glucose uptake by muscle cells.

However, in contrast to the previous cases, our patient ingested a relatively small amount of venlafaxine (2.5 g versus 22.5 g [6], 7.5 g [7], and 9.0 g [8]). Despite this, he had a persistent case of hypoglycemia lasting 65 hours after ingestion of venlafaxine. By this time point, his serotonin syndrome had already resolved, and he was eating and drinking without difficulty, yet still requiring hypertonic glucose support. He posed a particularly unique clinical picture since he also presented with alcohol intoxication, which is known to cause decreased gluconeogenesis [13, 14]. Alcohol has also been described to redirect microcirculation from exocrine to endocrine functional areas of the pancreas through nitric oxide and vagal stimuli, thereby increasing insulin secretion [15]. Another contributing factor in this case is premorbid malnourishment resulting in decreased glycogen stores and increased insulin surges upon feeding, as known to occur in refeeding syndrome [16]. This setting likely worsened the alcohol induced hypoglycemia since gluconeogenesis is increasingly important for glucose production as fasting duration increases [17]. However, alcohol suppression of gluconeogenesis even in the setting of malnourishment typically resolves quickly with IV dextrose, and given our patient’s persistent hypoglycemia, this alone cannot explain his clinical presentation [18-20]. Therefore, we believe our patient’s hypoglycemia was primarily venlafaxine induced, but is multifactorial in nature with contributions from alcohol suppressed gluconeogenesis and decreased glycogen stores that made it more difficult for the hypoglycemia to resolve.

Given the multifactorial nature of this patient’s hypoglycemia, we continued supportive hypertonic glucose. With no apparent resolution at three days, we elected to treat with two 50mcg subcutaneous injections of octreotide 5 hours apart, as described in a previous case report [7]. As a somatostatin analogue, octreotide has inhibitory effects on secretion of hormones involved in the glucose metabolism pathway, including insulin and glucagon, and has been used in the treatment of sulfonylurea induced hypoglycemia [21]. Blood glucose levels increased after the initial injection and we were able to stop the dextrose infusion. There were no further episodes of hypoglycemia.

Our case demonstrates a unique clinical presentation of venlafaxine-induced hypoglycemia complicated by alcohol intoxication on a background of malnutrition. This combination resulted in a persistent case of venlafaxine overdose associated hypoglycemia. Given our patient presented with initially normal sugars that quickly dropped, we suggest early and repeated measurements of blood glucose with presentations of venlafaxine overdose. Furthermore, since concomitant alcohol intoxication is common with overdose presentations to the emergency department [22, 23], it is not only important to check blood glucose in these patients, but also to keep a multifactorial approach when treating hypoglycemia, especially when the requirement for intravenous glucose support persists for longer than expected. In these patients with unresolving venlafaxine induced hypoglycemia, octreotide can be used as treatment to stop the need for ongoing dextrose support.