Poland syndrome describes the congenital absence of the pectoralis major and minor muscles on one side of the body accompanied by chest and upper extremity deformities on the same side. However, the only constant finding of the syndrome is the absence of the sternocostal component of the pectoralis major muscle. This finding may be accompanied by additional findings on the same side such as absence of pectoralis minor muscle and of ribs 2 to 5, under-development of breast tissue, latissimus dorsi, serratus anterior and external oblique muscles. The incidence is approximately 1 in 30 000 live births and is more common in men than in women. It mostly holds the right hemithorax of the body. Here we present a 20-year-old male patient without complaints, diseases or other functional anomalies, who has hypoplasia of the right hemithorax, palpation indicating hypoplasia of the pectoral muscle group, and thoracic CT is showing a lack of pectoral muscles.

This anomaly entered the literature thanks to Alfred Poland, a medical faculty, student at Guy's Hospital during 1840-1841, who recognized and published an anatomic deformity of a 27-year-old ex-convict named George Elt [1] and it is referred to as Poland syndrome. The complete spectrum of anomalies seen in Poland syndrome was summarized by Thompson in 1895 [2]. There has been a marked change in its definition. The main feature is the absence of major pectoral muscle. The presence of one or more of the other known characteristics of the Poland Syndrome is considered to be the defining factor. One characteristic that is frequently mentioned in the definition of Poland syndrome is unilateralism. Although many isolated bilateral pectoral agenesis have been reported, there is only one case in the literature that meets the definition of bilateral Poland. The incidence is about 1 in 30 000 live births and is more common in men than in women. In the majority of cases, the right side of the body was reported to be held more often than the left side [1-4]. The reported cases in the literature are usually associated with other organ anomalies or tumors at various rates, in addition to the Poland syndrome [1-8]. That’s why patients with additional anomalies in childhood are easily diagnosed and mild cases can be overlooked [4]. We could not find a case in literature that only had pectoralis major muscle anomaly (absence). We aimed to present a rarely seen, mild form of Poland syndrome with no organ anomaly and no functional impairment, just the apparent lack of the muscle (Isolated pectoralis major absence of muscle).

A 20-year-old male patient with no previous complaints and illnesses noticed the deformity in his right chest about 10 months ago. Our case was living in the province of Bolu, Turkey. There was no history of a similar phenotype or malformation in the family. Physical examination and vital sings were normal. When viewed from the front, the right hemithorax was significantly lower than the left hemithorax. The absence of pectoral muscle groups was detected by palpation. On the chest X-ray there was an hyperlucency appearance on the right side. On thoracic CT, the absence of pectoral muscle groups was clearly visible (Figure 1). Pulmonary parenchyma and vascular structures were normal. There were no pathological findings in the abdominal, urinal and pelvic ultrasonography (USG). Other systematic and laboratory examinations were normal. 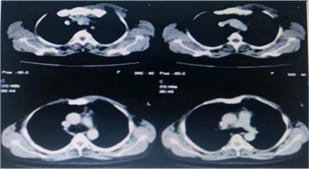 Poland syndrome is defined as one hand being smaller than the other,  the unilateral absence of the sternocostal region of the pectoralis major muscle, various deformities and malformations of muscle, bone and vein structures on the affected chest wall and the ipsilateral upper extremity in addition to heart and other internal organ malformations [1, 2, 5, 9]. The incidence of Poland syndrome is reported between 1/7 000 and 1/100 000 [1, 5]. It is seen in men 2-3 times more than in women. Male unilateral deformity is twice as common on the right side of the chest as compared to the left. There is no predisposition to one side in females [1, 5, 6]. The cause of Poland's syndrome is unknown. Most cases are sporadic [1, 2, 7]. However, in a small number of cases, familial history have been reported [10,11]. In one study, however the fact that only one of twin brothers was found to have Poland syndrome, was interpreted as an evidence against genetic transition [3]. The genealogy of our patient were examined in detail and no Poland syndrome was found in the other members of the family. In general, it has been reported that Poland syndrome is three times more common in men than in women and that the right side of the body is affected three times more on the left side [1, 5, 6, 12]. Our case was male and the right side of the body was held. Another study examined the association of Poland syndrome and dextrocardia in 16 reports and found that dextrocardia in 23% of the 26 left side affected patients, but no dextrocardia in the 48 patients whose right side was affected. The high incidence in Poland syndrome suggests that dextrocardia may be a part of the Poland complex [12,13]. In our case, the right side was involved yet no cardiac anomaly or isolated dextrocardia was detected on telecardiographic, echocardiographic and MRI examinations.

In some cases with Poland syndrome, nipple anomalies (hypoplasia or absence), hypoplasia and aplasia in the arm, syndactilia, brachidactilia, lack of finger or costa on the same side, skeletal system anomalies (spine, scapula, sternum, and foot), heart, kidney anomalies, or pectoralis major anomalies as a part of Möbius syndrome can be seen in various frequencies [1, 4, 6, 7, 14, 15].  The size of the anatomic malformation varies significantly as well as the clinical signs or symptoms of anomalies. Almost none of the patients have the sternocostal head of the pectoralis major muscle and most patients do not have pectoralis minor muscles. Poland syndrome gives 1/3 of the women breast anomalies. Breast anomaly can range from simple breast hypoplasia to amastia. In cases where the breast sings are faint, Poland syndrome can be caught incidentally during radiological examination at a very low rate of 1/19 000. Breast involvement ranges from mild hypomastia to amastia. Despite a normal rib cage in most of the cases, the majority of patients with affected costa have at least one collapse on the rib cage. Hand involvement is seen in less than half the patients [5, 16, 17]. The proportion of patients with Poland syndrome who have dextrocardia without cardiac inversion is about 6% [13]. In contrast, mild forms of Poland syndrome are more common than severe forms and may rarely escape diagnosis. There was no pectoralis major muscle on the right side and hypoplasia of the anterior axillary line was present. We accepted the case as a mild form of Poland syndrome with no abnormalities in the same side costa, extremities, skeletal system, or other organs and the nipple was normal. Although the pathophysiology of this syndrome is still not fully explained, various hypotheses are proposed. According to the most accepted hypothesis, as the upper extremities in the intrauterine period are budding from the chest wall during the sixth to seventh weeks of gestation, mutations caused by the different teratogenic factors result in malformation or spasm in the brachiocephalic arterial structures and the blood flow is decreased. The disruption of subclavian artery blood flow has been reported to cause upper extremity injuries and the involvement of internal thoracic artery, can cause pectoralis major muscle, breast and other thoracic wall injuries [2, 18, 19]. According to another hypothesis, parenchymal malformations have been reported due to deterioration of lateral plate mesoderm migration at 3 and 4 weeks of intrauterine development [20]. In our case, pulmonary parenchyma and vascular structures were evaluated as normal in computerized thorax tomography. The absence of pectoral muscle in our patient did not result in loss of strength or malfunction. Patients with advanced chest wall defects and patients with some hand anomalies are eligible for surgical treatment. Depression of the pectoral region in males, breast pathologies in women causes patients to look for cosmetic solutions. He and his family did not care about the aesthetic appearance and did not consider the operation.

The reported cases in the literature are usually associated with other organ anomalies or tumors at different rates in addition to the Poland syndrome. For this reason, patients with anomalies can easily be diagnosed in childhood and mild cases can be under diagnosed. We present a rare case of Poland syndrome without functional abnormality and organ anomaly other than impaired appearance.