Progressive supranuclear palsy (PSP) is a rare neurodegenerative disease with a prevalence of five to six persons per 100,000 people and characterized by progressive axial rigidity, vertical supranuclear gaze palsy, frontal lobe cognitive decline, and balance issues. The clinical examination findings are diverse and PSP cases are often under-diagnosed or misdiagnosed. We report a case of a 54- year-old male patient that presented primarily with recurrent falls due to postural instability and bilateral leg weakness that had progressively worsened to being wheelchair-bound. An extensive physical examination revealed classical findings indicative of PSP.

Progressive Supranuclear palsy (PSP) is a rare neurological disorder affecting 6 per 100,000 individuals each year [1]. Due to the scarcity of this disease, the etiology of PSP was suspected to be sporadic. However, recent studies have shown that PSP may have an autosomal dominant pattern and that lack of clinical recognition is due to the variable phenotypic expression of this disease [2, 3]. Patients with PSP may have accompanying TDP-43 pathology in the limbic system and PSP-vulnerable regions, such as the subthalamic nucleus, substantia nigra, and pontine tegmentum, but not in the motor neurons [4, 5]. Individuals with PSP are often diagnosed in the fifth decade of life and the disease has a predilection to affect males more than females [1, 5].

The disease was first described by Steele and Richardson in 1964 as a late-onset degenerative disease with a unique constellation of symptoms such as supranuclear palsy affecting vertical gaze, pseudobulbar palsy causing dysarthria, dysphagia, and dystonic rigidity of the neck and upper trunk. Dementia, if present, is usually mild, although patients commonly have neuropsychiatric manifestations such as depression, irritability, and apathy. Neuronal loss, gliosis, and abundant neurofibrillary tangles with neuropil threads are commonly seen in Neuropathology. This specific pattern of nerve change distinguishes the disease from other neurological disorders such as Creutzfeldt Jakob Disease, and Alzheimer’s Disease [6, 7].

PSP is often misdiagnosed because initial symptoms appear vague. The first symptom is usually loss of balance and may be misinterpreted as a cerebellar or inner ear disease. Other early symptoms, such as irritability, and apathy may mistakenly be assumed to be depression. As the disease progresses, patients report blurry vision, frequent blinking, inability to make eye contact, and painful eye movements, especially when looking up. Slurred speech and dysphagia are other early symptoms [3, 7].

Our patient is a Chilean resident and traveled to the United States in the hope of being diagnosed and find treatment for his disease. On history taking and further examination, we deduced his symptoms to be consistent with PSP and followed him with additional tests and radiological imaging to confirm.

A 54-year-old man from Chile, with a past medical history of hypertension and diabetes mellitus, presented to the office complaining of painful leg muscle spasms, bilateral leg weakness, and involuntary movements that had progressively worsened since the diagnosis, as he is now wheel-chair bound. In the past few months, he started having sensory complaints that consisted of tingling and burning sensation predominantly in the soles, as well as numbness of the entire body below the neck, orthopnea, and dysphagia to solid foods. The disease was diagnosed and treated in Chile, for which he received baclofen 10mg, diazepam 10mg, clonazepam 2mg, acetaminophen, and ketoprofen daily.

Other relevant comorbidities included depression, treated with sertraline; hypertension, treated with enalapril; diabetes mellitus, for which metformin was discontinued due to adverse effects; vertigo due to a middle ear disorder (unclearly stated by the patient), current left inguinal hernia, former smoker, previous tooth reconstruction surgery after a fall in 2015, and an allergic reaction to penicillin. In addition, he had a past family history of hypertension and stroke in his parents and his 3 siblings and Parkinson’s disease in his brother.

In the absence of lower motor neuron signs, prominent upper motor neuron signs, multiple cranial nerve abnormalities, and cerebellar signs, the main diagnosis considered was progressive supranuclear palsy (PSP). A nerve conduction study (NCV), electroencephalography (EEG), and electromyography (EMG) were performed. The EMG was unremarkable (no peripheral neuropathy, no compressive neuropathy, no evidence of nerve damage, and the sensory amplitudes for median and ulnar nerves were higher than expected, whereas the motor ones were appropriate in size) (Figure 3).

The EEG showed no epileptiform discharges and stage I sleep was noted. The EMG/NCV were normal, with no sensory neuropathy and normal proximal conduction, so overall nerve conduction studies for sensory and motor conduction study were within normal limits. The patient also had a previous brain MRI in 2015, which was normal and showed no white matter lesions. A spinal MRI performed in the same year showed disc pathology in multiple segments in dorsal and lumbar regions. A current brain MRI was performed for assessing classical features of PSP. 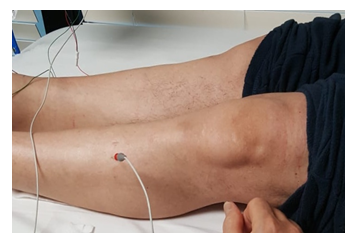 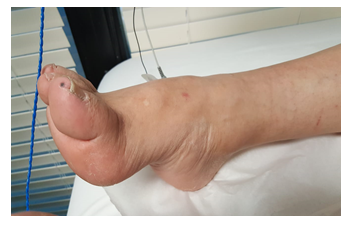 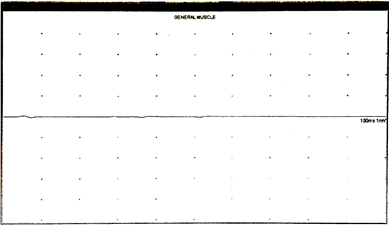 PSP results from an aggregation of abnormally phosphorylated tau proteins. Tau proteins aid in axonal transport and support neuronal microtubules. Localized accumulation of the irregular tau proteins forms what are known as neurofibrillary tangles [6]. In addition to the tauopathy, PSP involves the degeneration of dopaminergic neurons and cholinergic neurons, leading to loss of basal ganglia, cerebral cortex, and, most clinically characteristic, brainstem structures. Structures within the brainstem that atrophy is the dorsal midbrain, notably the midbrain tegmentum and pedunculopontine nucleus, which leads to postural stability, and the motor nuclei of the cranial nerves in advanced stages of the disease. Given the atrophy of the midbrain tegmentum, the rostral interstitial medial longitudinal fasciculus is greatly affected, which decreases the presence of vertical excitatory burst neurons, and an inability to initiate vertical saccades ensues [7].

Recent epidemiological studies have shown that PSP (Steele–Richardson–Olszewski syndrome) is more common than previously recognized, that it is commonly misdiagnosed, and that it may present to a wide range of hospital specialists [8]. Patients with PSP tend to present with disturbance of balance, a disorder of downward gaze, and levodopa (L-DOPA) unresponsive Parkinsonism, and usually develop progressive dysphagia and dysarthria. Originally, the clinical hallmarks of PSP are vertical gaze palsy, pseudobulbar palsy, axial rigidity, and cognitive impairment [9].

One of the common differentials to keep in mind is Parkinson’s disease. Some of the most distinguishing features in PSP are eye-related in contrast to Parkinson’s disease. Other symptoms of PSP, like difficulty, swallowing, speech issues, rigidity, balance issues, walking issues (gait disturbances), trouble with movement, mask-like facial expression, and monotone speech directly overlap with PD. However, one interesting difference that may be present between those with PSP and those with PD is within their posture. Individuals with PSP may stand up very straight and tip their heads backward when moving, causing them to be off-balance or fall. This is called axial rigidity. On the other hand, those with PD may be more likely to lean over or bend forward when walking. Additionally, individuals with PD will often have a tremor, whereas someone with PSP is less likely to experience this [10-12]. The patient in our case had no tremor and showed axial rigidity ruling out Parkinson’s disease. A trial of Parkinson’s treatment [levodopa]was not given and PD was ruled out purely based on clinical characteristics.

Our patient was reported to be diagnosed with ALS in his home country and presented with painful leg spasms and progressive bilateral leg weakness. Consideration of Progressive supranuclear palsy was done as the patient had no lower motor neuron signs like no muscle fasciculations and we were diagnosed as PSP based on MDS clinical criteria. Our patient met the mandatory inclusion criteria of being over 40 years old when the symptoms first appeared, followed by a gradual progression of the disease with no family history of PSP. None of the exclusion criteria applied to our patient; although he exhibited UMN signs, he had no signs of LMN disease and pure UMN signs are not an exclusion criterion. As per this criteria, our patient had core clinical features categorized at LEVEL -1[ O1, P1] suggesting a high certainty of PSP [13].

There is a marked limitation of the range of voluntary gaze in the vertical more than in the horizontal plane – meeting the criteria of O1. There is a history of more than one unprovoked fall within the past 3 years and is wheelchair-bound now, thus meeting the requirements for P1. He had progressive gait freezing, however, since he was never tried on levodopa, it cannot be ascertained if the patient is resistant to it. Hence, for the time being, he does not meet the requirements for A1 level of certainty for akinesia. Similarly, although he had an effortful, slowed speech with spastic elements, he does not meet the requirements for C1, C2, or C3 levels of certainty of cognitive dysfunction. However, spastic dysarthria and dysphagia are the supportive features in this patient, categorized as CC2 and CC3. Basic features need to be present in a patient in order to be considered for the diagnosis of PSP of any phenotype and at any stage and are present in our patient.

Lack of muscle atrophy, fasciculations, presence of sensory deficits, and normal electromyography in this patient rules out amyotrophic lateral sclerosis. In addition, our patient has had symptoms for 5 years; the median survival time from onset to death ranges from 20 to 48 months in ALS, which is considerably lower than that of PSP. The absence of neurocognitive dysfunction and rigidity rules out the Parkinson-like variant of PSP. The patient also had normal nerve conduction studies indicating an absence of peripheral neuropathy as a cause of diabetes mellitus.

Progressive Supranuclear Palsy (PSP) is a disease of unknown etiology, but many researchers now believe that various genetic and environmental factors interact, leading to the destruction of brain stem cells. PSP is underdiagnosed, recent autopsy studies found PSP pathology in 2-6% of elderly people that had no diagnosis of PSP before death. Corticobasal degeneration resembles PSP as both are tauopathies and some experts believe that CBD and PSP are variations of the same disease. Multiple System Atrophy (MSA), a combination of Parkinsonism and cerebellar ataxia, resembles PSP in that many patients with MSA also develop the impaired function of the autonomic nervous system. Another differential is Parkinson’s disease, which progresses more slowly than PSP and usually is not incapacitating for a decade or more. As there is no cure at the present time for PSP, treatment is symptomatic and supportive.