A central venous catheter (CVC) is a device used in cancer patients for the management of chemotherapy and supportive therapy. Upper limb deep vein thrombosis (UPDVT) is the most common non-infectious complication of CVC [1]. The incidence of clinically overt catheter-related thrombosis (CRT) varies between 0.3% and 28.3%, whilst the incidence of clinically overt pulmonary embolism (PE) within CRT patients ranges from 15% to 25% [2]. Remarkably, an autopsy-proven PE rate of up to 50% has been reported in those patients with CRT [3]. The high incidence of autopsy-proven PE demonstrates that there is an urgency to explore systematically the risk for presence of PE to prevent the risk of fatal PE in patients with CRT. In the current study, we present a single case of a 58-year-old man who was diagnosed with venous jugular CRT, complicated by a PE revealed by hemoptysis.

A 58-year-old man was diagnosed with a non-metastatic pulmonary cancer after a history of increased dyspnea. The anatomopathological examination showed an epidermoid carcinoma, and the treatment consisted of chemotherapy. His port-a-catheter (PAC) was implanted one month after diagnosis of cancer, and during the first chemotherapy, performed 1month after implantation, the PAC proved functional. On the day of the patient’s second chemotherapy his biological and clinical parameters appeared normal: the patient did not have fever and had a heart rate of 90 bpm, blood pressure of 122/89 mmHg, and an oxygen rate of 96%. During clinical examination, both the chest and PAC examination were ordinary, although the patient reported a right-side cervical pain and episodes of hemoptysis for 3 minutes each. After completion of the regular chemotherapy treatment, an edema of the neck was observed on the side of the PAC, which did not coincide with pain. An X-ray was performed and showed that the tip of the PAC was dispositioned (Figure 1). To investigate the cause of the misplacement, an ultrasound imaging was performed that showed thrombosis within the right internal and external jugular vein (Figure 2). An anticoagulation by enoxaparin 100UI/kg x 2 was started and the interrogation of the patient was renewed, in which he declared an increased dyspnea. Because of the dyspnea and the hemoptysis, PE in addition to the detected thrombosis in the jugular vein was suspected. A CT scan confirmed the jugular vein thrombosis and detected a PE with an endoluminal defect at the right postero-basal segmental pulmonary artery (Figure 3-5).

In the patient’s follow-up, hemoptysis slightly increased, while the dyspnea and the cervical edema decreased. The duration of the anticoagulation will be determined based on the bleeding risk of the patient and the concomitant cancer. 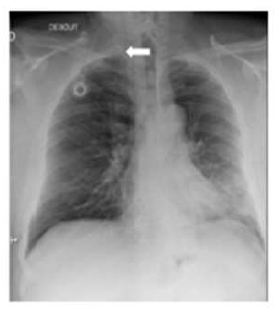 Figure 1: Chest Xray: Disposition of the tip of the port-a-catheter. 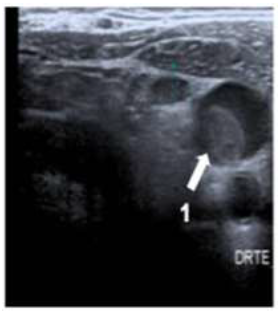 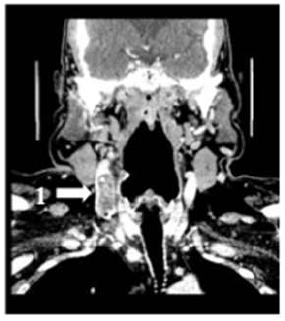 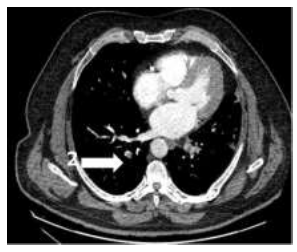 In the general population, UPDVT accounts for only 1 to 4% of all thromboembolic events and can be categorized into idiopathic UPDVT, UPDVT caused by anatomical or biological abnormalities, and UPDVT caused in the presence of equipment [4], such as CRT. The CRT thrombotic model is based on each component of Virchow triad. Endothelial lesions can result from the insertion of the CVC in the vessel, the continuous friction of the CVC against the vessel wall, and the turbulent inflow from the catheter. The presence of a CVC in the vessel lumen hampers blood flow leading to stasis. A state of hyper-coagulability can be introduced by toxic side-effects of some medications, the vessel injury, or synthetic materials [5].

CVCs have considerably improved the management and tolerance of chemotherapy and other supportive care. Data from the RIETE register demonstrated that most cancer patients with CRT were male, younger than 65, and had few additional risk factors [6]. Moreover, death occurring in patients with CRT is mostly PE related [7]. The majority of the patients with CRT were asymptomatic or presented with CVC dysfunction or fever from an associated infection. Symptomatic CRT occurred in 1 to 5% of patients and typically coincided with discomfort, edema, or discoloration at the catheter insertion site or in the ipsilateral upper extremity [8]. As a result of CRT, venous collaterals may be visible in the neck, arm, or chest. Clinicians should examine carefully the catheter entry site for signs of a CVC-related infection, since an infection can result in thrombosis or stimulate thrombosis progression. An important long-term consequence of CRT is the loss of central venous access, which can have significant implications for patient management. CRT is the most common non-malignant cause of superior vena cava syndrome [9]. CRT is associated with a number of clinically relevant complications, including catheter dysfunction, recurrent DVT, PE, post thrombotic syndrome, and anticoagulation-associated bleeding [10]. When examining a patient with CRT, finding symptoms like hemoptysis, shortage of breath, tachycardia should trigger the suspicion of PE.

In this case report, a two-step diagnostic strategy was applied. First, CRT was diagnosed using ultrasound imaging followed by the diagnosis of PE using CT-scan. When suspecting an upper limb DVT, which could be the case for a CRT, the Constans clinical decision algorithm can be practiced [21]. This algorithm results in a score up to 3, based on a combination of 4 clinical factors: The presence of an IV device (+ 1), a localized pain (+ 1), and a localized pain a unilateral edema (+ 1) account for 1 point each, while a negative point is assigned if there is an alternative plausible cause for the specific clinical presentation. In a prospective study that includes 406 patients, a non-relevant D-dimer level with a Constans score below 1 point appeared to be a consistent way to exclude upper limb DVT with no failure after 3 months follow-up (95% CI: 0.0-4.2) [22]. The incidence of clinically overt PE in patients with CRT ranges from 15% to 25%, but an autopsy-proven PE rate of up to 50% has been reported [3]. Clinical prediction rules, such as the Wells score or the Geneva score, do not take the presence of a CRT into consideration, which is by itself associated risk factor for PE. Respiratory signs, such as the reported hemoptysis in our case, should evoke a suspicion of associated PE.

Since PE is a complication of CRT, the initiation and duration of the treatment depends on CRT occurrence and not on the PE occurrence in a patient with cancer. Data from the RIETE registry demonstrate that the rate of recurrent venous thrombosis (independent of the location) during and after therapy was 2.83 and 2.88 per 100 patient years, respectively [10]. Most recurrent thrombotic events occurred within the first 2 months of chemotherapy. French recommendations suggest that symptomatic CRT should be treated for at least 3 months (grade 2), anticoagulation should be continued beyond 3 months when the CVC is kept in place and the cancer is active (grade 2), and CRT should be treated using LVMH or VKA rather than DOACs (grade 2) [23]. In case of a CRT, French recommendations suggest keeping the CVC in place if it is functional (grade 2) and the following conditions are met: The distal end of the CVC is dwelling in a good position at the junction between the upper vena cava and the right atrium, the CVC is necessary for the patient's management, and there is no sign of a CVC infection. If these conditions are not met, it is recommended to remove the CVC (grade 2) [23]. Another reason to remove the CVC includes absence of disappearance of the symptoms with anticoagulation alone.

The current case report highlights the importance of acknowledging the high risk of PE associated to CRT, since this clinical situation is structurally underestimated. The case also emphasizes the importance of careful examination by the physician to prevent death of CRT patients from PE.