Pulmonary Hyalinizing granuloma (PHG) is a rare form of lung pathology, often initially presenting as nodules prompting workup for possible malignancy. We present a case of a 29-year-old man with an irregularly shaped, growing hilar mass, suggested to be PHG on initial biopsy, later confirmed by surgical pathology examination of the entire lung after pneumonectomy. The pathology findings also reported many of the histopathologic features found in IgG4-related sclerosing disease (ISD). This gross presentation and the correlation with ISD may have therapeutic implications in the management of PHG.

Pulmonary Hyalinizing granuloma (PHG) [1] has described often in the literature as a rare lung pathologic process [2] presenting as a solitary pulmonary nodule [3] or multiple nodules [4, 5]. Initially, these nodules may be indistinguishable from malignancies on radiographic studies [6], but some data suggesting a link to inflammatory markers such as IgG4 have been seen [7]. There is not much report in the literature of the presentation as an irregularly shaped mass, which increases the clinical suspicion for a malignant process and the diagnostic difficulty. As such, biopsy and tissue examination remains the only definitive way to diagnose the disease, as it presents with unique histologic findings, often suggestive of an exaggerated immune response [8].

This is a now 29-year-old male, never smoker, who had an incidentally found a large right-sided lung mass when he was age 25, on chest x-ray (CXR) when he presented to the emergency department (ED) for an unrelated burn injury. Follow-up computed tomography (CT) scan of the chest showed a 4.4 × 4.0 cm R perihilar mass with obstruction of the middle lobe bronchus and noting complete atelectasis of the Right Middle Lobe (RML) (Figures 1A-B). 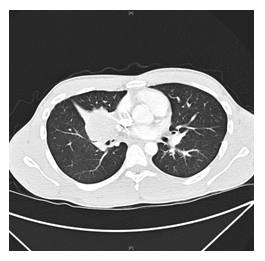 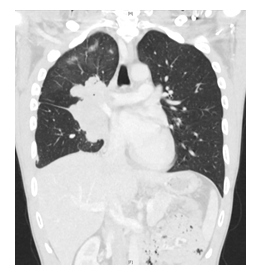 Figure 1B: Coronal view of initial CT chest with contrast, showing the mass and RML atelectasis

The patient remained asymptomatic and had never had any respiratory complaints and denied a history of tuberculosis (TB) exposure. He had an elective bronchoscopy with biopsies roughly 2 weeks afterward which showed lymphoplasmacytic infiltrate and abundant hyalinized collagen, suggesting PHG as a possible diagnosis. However, on follow-up imaging in thoracic clinic 3-4 months later, there was new pleural fluid noted on the right, interval increase in size of the mass, and another slightly hypermetabolic lymph node at the right chest wall, all concerning for malignancy. As such, we elected to offer the patient a Right-sided Video-Assisted Thorascopic Surgery (VATS) wedge resection, biopsy and drainage to obtain definitive tissue diagnosis. Intraoperatively, pleural fluid was drained and sent for cytology. The mass was large and hard, making it unfeasible to perform a wedge resection. As such, a Tru-Cut needle biopsy was performed under direct visualization. Pathology taken from this procedure did not show any overt signs of malignancy or lymphoma. The biopsy sample was also sent to a soft tissue expert pathologist for consultation, who also noted no convincing signs of malignancy. The lesion was described as a hyalinized spindle cell proliferation of mesenchymal origin with chronic inflammation, but no definitive diagnosis was made. Given the lack of a malignant diagnosis, we decided to keep the patient on surveillance with CT scans. This was continued for about 32 months, when the CT chest at that time showed the size of the mass now to be 9.2 × 5.2 × 9.5 cm with new evidence of mediastinal invasion. Given the growth, the decision was made to resect the mass. Repeat bronchoscopy and EBUS that same month were performed first to ascertain that there was no malignancy in the mediastinum. With the size of the mass and evidence of invasion into extrapleural spaces, we decided that a right-sided intra-pericardial pneumonectomy would be needed for complete resection. Given the possible mediastinal invasion, we approached the case via a sternotomy, which was extended into a right hemi-clamshell incision. Intraoperatively, the right pleural space was severely inflamed, and the mass was in fact noted to be adherent to the superior vena cava (SVC) and part of the mediastinum. All vessels were controlled and divided intra-pericardially, and a right pneumonectomy was performed. Pathological examination of the specimen confirmed the diagnosis of PHG.

After the operation, the post-op course was significant for pericarditis with effusion, seen on EKG and echocardiogram, for which the patient was started on colchicine prophylaxis, as well as multiple deep venous thromboses (DVT) in both legs, for which he was initially started on therapeutic heparin and eventually had an inferior vena cava (IVC) filter placed by Vascular Surgery. Following this, all anticoagulation was stopped prior to discharge per cardiology recommendations as there was interval increase in size of the pericardial effusion. He was seen at follow-up in thoracic clinic roughly 2 weeks after discharge and reported recovering well. He was also seen in rheumatology clinic around the same time as well, where the decision was made to continue surveillance with repeat CT scans and serum IgG4 levels every 6-12 months. If there was evidence of recurrent disease, a discussion would be held at the time regarding possible medical therapy, using steroids or rituximab.

The pathology examination of the gross specimen (Figure 2A) revealed a large mass characterized by dense keloidal hyalinization with admixed plasma cells and cuffed by lymphoid aggregates (Figure 2B-C), suggestive of PHG. Notably, the mass extended from the pericardium medially, with hilar involvement, to the pleura laterally. However, there was no penetration into the pericardium or the pleura. 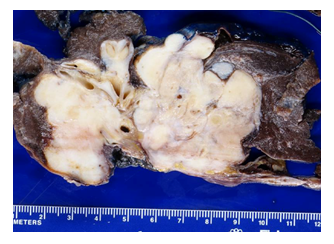 Figure 2A: Image of the gross pathological specimen, a firm, tan, nodule lesion with irregular contour and infiltration into the lung parenchyma and surrounding and encasing hilar bronchi and vessels. 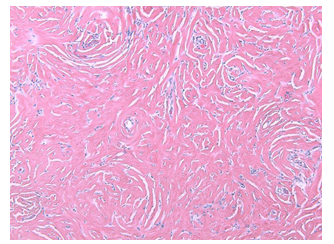 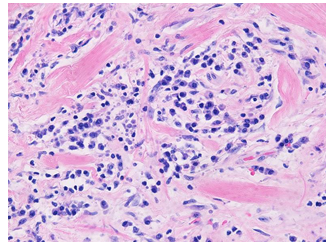 The lesion was noted to grow into the submucosa of the bronchial margin and surrounded nerves (Figure 2D) and large caliber hilar vessels (Figure 2E) leading to intimal hyperplasia and scattered pulmonary organizing thrombi, arterialization and thickening of pulmonary parenchymal veins and congestive changes with areas resembling capillary hemangiomatosis and with many hemosiderin-laden pulmonary macrophages. While the tissue IgG4 level was elevated, definitive venulitis was not seen. 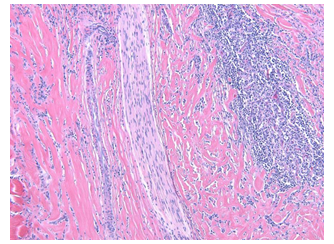 Figure 2D: Reactive lymphoid aggregates are seen at the periphery. Note a nerve is trapped in the dense collagen fibers (100x) 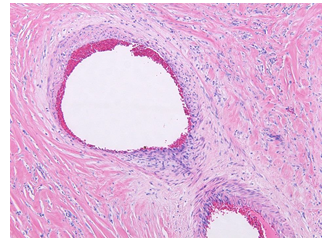 This case reports a presentation of PHG with a few notable features. Firstly, the gross presentation of the lesion, which was large, and irregularly shaped. Much of the previous literature regarding PHG have described the gross presentation to be that of a pulmonary nodule, either solitary [3] or multiple [4, 5]. With this relatively less encountered presentation, it is even more likely that the work-up for this lesion would go down the malignancy pathway with less consideration given to the possibility of PHG than described in the other literature.

Secondly, our specimen contained histologic features of a fibrosing process as well as numerous plasma cells with an increase in the tissue IgG4 level. This variant of PHG with an elevated IgG4 has been previously reported [4], further suggesting an underlying immunologic mechanism related to IgG4-related sclerosing disease (ISD) [7, 8]. IgG4 antibodies have been shown to have unique structural and functional properties, most notably forming “half-antibodies” where an in vivo exchange results in a functional antibody with two different binding specificities [9], which could contribute to an increased immune response.

Initial reports of a systemic fibrosing disease associated with elevated serum and tissue IgG4 levels were noted in patients with autoimmune pancreatitis [10]. More recent literature has shown that ISD can affect other organs as well, including the lungs. Lung manifestations of ISD are diverse; patients can be asymptomatic or have a variety of non-specific symptoms including chest pain, cough, dyspnea on exertion, and fevers [11].

Typically, the features required for histopathologic diagnosis of ISD are infiltrative plasma cells with elevated IgG4 levels, fibrosis, and phlebitis [7]. In our specimen, definitive venulitis was not noted, however the other described histopathologic features were noted to be identical to fibrosing mediastinitis (FM), an uncommon but established complication of histoplasmosis [12]. Multiple case reports have been published establishing a significant histopathologic overlap between FM and ISD [13, 14]; similar relationships have been suggested between PHG and ISD as well, but have not been as extensively studied [4, 7].

Both PHG and ISD have both been reported to have good response to systemic glucocorticoids [15, 16] but treatment decisions are more driven by clinical experience than randomized controlled trials [16]. Nevertheless, a variety of other treatments beyond glucocorticoids have been suggested for management of ISD that is refractory to glucocorticoids [17]. Given the ability of PHG to mimic lung carcinoma, even more so in this case given its gross presentation, as well as the suggested similarities of this high-IgG4 variant of PHG to ISD, further research is warranted to better elucidate the underlying pathologic mechanism as well as clarify and distinguish the diagnostic and treatment algorithms for this unique disease from the lung carcinoma management pathways. We believe that early involvement of specialists from multiple disciplines is of utmost importance. In this case, it is possible that it would have helped reduce the diagnostic uncertainty and the patient may have been able to avoid a radical resection at such a young age.