Antiphospholipid Syndrome (APS) is a condition characterized by clinical features of thrombosis and repeated miscarriages (criteria manifestations) accompanied by presence of antiphospholipid antibodies on laboratory tests. APS is a disease that can also present different clinical manifestations (non-criteria manifestations), including livedo reticularis, cutaneous ulcerations, thrombocytopenia, hemolytic anemia, valvular heart disease, and nephropathy, for which the gold standard treatment is often not known. Most of the APS management guidelines focus on the prevention and treatment of thrombotic and obstetrical manifestations, by anticoagulant therapy. However there is less consensus on the gold standard treatment for other clinical manifestations, which can have a serious impact on the health of the affected patient. Here we present a case report that emphasizes the importance of identifying correct therapy for non-criteria clinical manifestations of APS triggered by post-traumatic left fronto-temporal hematoma, subsequent neurosurgical intervention complicated by subdural empyema.

Antiphospholipid syndrome, also known as “Hughes Syndrome”, is a systemic autoimmune disease characterized by recurrent thrombosis and pregnancy morbidity along with persistent Anti-Phospholipid Antibodies (aPL) including lupus anticoagulant (LA), anti-β2-glycoprotein I (anti-β2GPI) and/or Anti-Cardiolipin (aCL) antibodies. APS is one of the most common acquired thrombophilic conditions, and unlike most cases of the genetic thrombophilia, is associated with both venous and arterial thrombosis. Indeed clinical manifestations are in most cases direct or indirect sequelae of a state of hypercoagulability which involves both venous and arterial vessels [1, 2]. APL can be either an isolated primary disease or associated with underlying autoimmune diseases, mainly systemic lupus erythematosus [3]. Although the first description of APS was made in 1983 under the name of anticardiolipin syndrome [4] several cases of patients with recurrent miscarriages, thromboembolic events and positive serology had been previously described [5-7]. In the 1980s, thanks to the use of molecular biology techniques, it was possible to identify the anticardiolipin antibodies and better understand the role of the mechanisms involved in the clinical manifestations of APS [8]. Clinical presentation of APS is highly variable (Table 1). The two hallmarks are thrombosis and obstetric diseases; these manifestations belong to the clinical classification criteria, along with the laboratory classification criteria (presence of LA, aCL, and/or anti-β2GPI) [9].

The most frequent thrombotic manifestations are represented by deep vein thrombosis of the lower limbs and pulmonary embolism. Regarding the involvement of arterial vessels, the ones of the central nervous system are the most affected, resulting in cerebral ischemia stroke and transient ischemic attack. Obstetrical manifestations include recurrent miscarriages, eclampsia, and preeclampsia that can result in premature delivery and fetal death [3,9]. APS should be suspected in patients with thrombotic events or obstetrical morbidity, without other risk factors. APS is then confirmed by the presence of antiphospholipid antibodies. For the diagnosis the positivity of at least one of the tests for aPL on two separate occasions at 12 weeks apart is needed [3]. In addition to the criteria manifestations, there are a series of other signs defined as "non-criteria", which may be present even in the absence of criteria manifestations. Non criteria manifestations include haematological (thrombocytopenia, haemolytic anaemia with or without schistocytes), cutaneous (livedo reticularis and livedo vasculitis, with purpuric macules, skin nodules, painful ulcers and necrosis), neurological (migraine, seizures, cognitive dysfunction, delirium, chorea, transverse myelitis, multiple sclerosis), cardiovascular (heart valve lesions, coronary artery disease), renal (glomerulonephritis, renal thrombotic microangiopathy) and orthopaedic (avascular necrosis of bones, non-traumatic fractures) manifestations [5,8,9]. There is also the so-called catastrophic APS (CAPS), which is characterized by diffuse thrombosis of small vessels resulting in multiorgan failure and high mortality. CAPS is the most severe form of APS, fortunately infrequent. In our patient we observed the concomitant appearance of several non-criteria manifestations: thrombocytopenia, hemolytic anemia, purpura and delirium. The presence of non-criteria manifestations is usually complicated by the fact that in most cases patients are already undergoing chronic corticosteroid therapy. Moreover, there isn’t a systematic, well-described approach in the guidelines for the treatment of these manifestations [2]. Therapy is based on primary and secondary antithrombotic prophylaxis. Low-dose aspirin proved to be effective as primary prophylaxis in asymptomatic aPL-positive individuals, as has hydroxychloroquine, particularly in patients with secondary APS and systemic lupus erythematosus. Regarding the treatment of thrombotic events, patients with venous thromboembolism are treated with long-term oral anticoagulants to maintain a target International Normalised Ratio (INR) of 2.0-3.0. In case of arterial thrombosis, the target INR increases to INR of 3.0-4.0, or a therapy with low dose aspirin plus anticoagulation can be set [5,10]. The anticoagulant medications used are lifetime warfarin or an alternative vitamin K antagonist. The literature regarding direct oral anticoagulants is not extensive. Alternatively, other anticoagulant options include low molecular weight heparin, unfractionated heparin and fondaparinux. Regarding non-criteria manifestations there are no standard treatment recommendations. Patients with thrombocytopenia and/or autoimmune hemolytic anemia may benefit from glucocorticoids with or without intravenous immunoglobulins as first-line treatment, whereas azathioprine, cyclophosphamide, and mycophenolate mofetil may be used as second-line therapies [5, 11]. Our patient only initially responded to isolated steroid therapy, and later intravenous immunoglobulin therapy was effective to correct severe thrombocytopenia. APS continues to be a cause of significant morbidity and mortality, so future treatment approaches should be tailored to meet individual patient characteristics.

A 56-year-old female with a history of Budd-Chiari syndrome, epilepsy, Antiphospholipid Syndrome (APS) associated with recurrent Deep Venous Thrombosis (DVT) in treatment with warfarin, was brought to the emergency department because of an accidental fall at home followed by altered mental status. Subsequent instrumental investigations revealed the presence of a post-traumatic left fronto-temporal hematoma successfully treated with surgical evacuation on January 23rd. On February 19th the patient returned to emergency room for fever and purulent secretions from the wound.

A brain CT with contrast medium was performed with evidence of a subdural empyema. This was treated with surgical evacuation and antibiotic therapy based on meropenem and linezolid. After isolation of Methicillin-Susceptible Staphylococcus Aureus (MSSA) on surgical piece, antibiotic therapy was modified by introducing oxacillin 3 g every 6 hours. During hospitalization postoperative delirium appeared, resolved after treatment with haloperidol and promazine and progressive decalage of steroid therapy with dexamethasone. On February 26th a sudden drop in platelet count was observed (from 140000/mm3 to 13000/mm3), dexamethasone was again increased from 1 mg daily to 4 mg daily and prophylactic dose of fondaparinux was discontinued. Subsequent finding of haemolytic anemia and purpura on the lower extremities (Figure 1, 2, 3) required a further increase in dexamethasone to 8 mg daily. In the suspicion of Systemic Lupus Erythematosus (SLE), anti-double stranded DNA antibodies were performed and resulted negative, confirming the picture of primitive APS, determining severe thrombocytopenia, hemolysis and purpura. At the next attempt of steroid transfer, further worsening of thrombocytopenia appeared (Platelet count < 20000/ mm3) and required therapy with Intravenous Immunoglobulin (IVIg) 800 mg/kg for two days. Subsequent progressive increase in platelet values was observed, stabilizing on a value of 80000/mm3 in the last days of hospitalization. Anticoagulant dose of fondaparinux was gradually reintroduced without further problems. 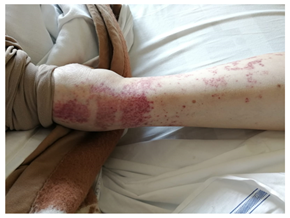 Figure 1: Purpura on the lower extremities.

Figure 2: Purpura on the lower extremities.

Figure 3: Purpura on the lower extremities.

Antiphospholipid syndrome is an autoimmune systemic disorder that represents one of the most common causes of acquired hypercoagulable state. The main clinical presentations are vascular thrombosis and pregnancy morbidity, associated with the persistent presence of antiphospholipid antibodies (criteria manifestations). There are also several non-criteria manifestations that may be present in patients with APS and whose treatment can be challenging. These are hematological, neurological, dermatological, cardiovascular, and renal manifestations that compromise the health of the affected individual. Treatment’s guidelines give indications about management of criteria manifestations. Long-term warfarin or other vitamin K antagonist therapy are used as antithrombotic prophylaxis. Low dose aspirin and prophylactic heparin are used to prevent recurrent obstetric complications. What is currently lacking is a consensus regarding the management of non-criteria manifestations. In patients with severe thrombocytopenia and/or hemolytic anemia, a beneficial effect of steroid therapy has been observed, which can be implemented with intravenous immunoglobulins, up to the use of immunosuppressant therapy as a second line of treatment. In our patient known for APS in general good control, we observed the development of an important hematological (thrombocytopenia, hemolytic anemia), cutaneous (purpura) and neurological (delirium) failure after a neurosurgical intervention complicated by subdural empyema. These non-criteria manifestations threatened the clinical stability of the patient, who was moreover frail. In fact, the patient's clinical conditions were worsened by the onset of thrombocytopenia and delirium, which also negatively affected the duration of hospital stay. In this case, the patient responded only partially to increase in steroid therapy and modification of anticoagulant. Only after the introduction of intravenous immunoglobulins we observed a gradual increase in platelet count and an improvement in patient's general clinical conditions.

This case exemplifies the need for a tailored approach to patients with APS, with treatment strategies that should consider different clinical manifestations and individual risk factors.