Invasive fungal infections remain among the most frequent severe and fatal complications of oncology, despite effective antifungal agents. Genetic aberrations may additionally increase the individual patient’s susceptibility to invasive mycosis, with the need for an intensified treatment, such as adjunctive immunotherapy combined with standard antifungal medication. Interferon-gamma (IFN-γ) as an immunostimulatory agent may represent a promising surrogate to reactivate the cytotoxic activity of macrophages in patients with ‘blind spots’. We report the case of a pediatric patient with AML and disseminated candida tropicalis infection, bearing a heterozygous CARD9 mutation, who was treated successfully with combined IFN-γ and conventional antifungal therapy.

Infectious complications remain major causes of treatment-related morbidity and mortality in children with acute myelogenous leukemia (AML) due to the intensive chemotherapeutic regimens needed to treat this disease. Invasive fungal infections (IFI) represent a particularly severe condition that affects 5-13% of AML patients [1,2] with a persistently unacceptable mortality rate of 40% [3]. However, even though IFI are not uncommon in pediatric AML patients, unusual presentations such as very early onset and severe, refractory disease courses might be indicative for an underlying immunodeficiency. Numerous genetic aberrations have been identified in the last years that confer particular susceptibility to fungal infections [4]. In the innate immune system, myeloid cells express C-type lectin receptors (CLRs) in their extracellular region, which belong to a class of transmembrane pattern recognition receptors (PRRs). Dectin-1, Dectin-2 and Mincle are three specific PRRs for beta-glucans and alpha-mannans, which are components of fungal cell wall [5]. Upon recognition of these carbohydrates, the host innate immune system is activated against these invading microbes. Downstream the CLR activation, all signaling pathways converge on an adaptor protein named caspase-associated recruitment domain 9 (CARD9) that is crucial in the signaling of CLRs for a successful antifungal response, leading finally to Th1 and Th17 differentiation and to the initiation of the inflammatory cytokine cascade in myeloid cells [5,6]. Particularly interferon-gamma (IFN-g) increases the cytotoxic activity of macrophages and plays therefore a pivotal role in the immune response to fungal invasion [7,8]. Patients with homozygous or compound heterozygous mutations of CARD9 are known to have a significantly increased susceptibility to life-threatening systemic candidiasis [9–11]. However, some sequence variants may lead to increased susceptibility for fungal infections even in heterozygosity, e.g. under immunosuppression. Identification of these patients is of crucial importance, as standard antimycotic treatment might not be sufficient for those high-risk patients who might benefit from adjunctive immunotherapy added to standard antifungal therapy [12,13]. Several case reports have indicated IFN-g as an additive treatment option in patients with IFI, where it seems to have an immune-stimulating effect with the potential to improve the cellular immune response in a situation of immunological “blindness” [3,13,14]. Here, we report the clinical case of an 11-year old boy with AML FAB M6 who suffered from a severe systemic candida tropicalis (c. tropicalis) infection, unresponsive to multimodal antimycotic treatment regimen, leading to multi-organ failure (MOF). Genetic analysis revealed a heterozygous CARD9 mutation. IFN-g as additive immunotherapy lead to complete resolution of this treatment refractory and disseminated fungal disease in a severely immunodeficient patient.

A previously healthy 11-year-old boy was diagnosed with AML M6 according to FAB classification. He started induction chemotherapy according to the AML BFM 2004 protocol. After one week, he developed septic fever, for which antibiotic treatment with ceftazidime and vancomycin was started. Unexpectedly, candida tropicalis was confirmed in the blood culture within 24 hours. Liposomal amphotericin B (LAB) was started immediately, however the patient’s conditions deteriorated rapidly towards MOF with involvement of heart, lungs, kidneys, liver and Central Nervous System (CNS), necessitating the transfer to the pediatric intensive care unit. Despite extended antifungal regimens including fluconazole, voriconazole, caspofungin, micafungin and posaconazole in changing combinations and negative blood cultures for candida after five days, radiological imaging documented a progressive dissemination of candida infection with bilateral pulmonary infiltrates, epidural spinal cord affection, bilateral renal and liver involvement as well as sinusitis, suspicious for further mycotic foci (Figure 1 a, c, e). A massive splenic infiltration with extensive areas of infarction required splenectomy (Figure 1 g, h): microbiologic analysis of the tissue showed positive results for c. tropicalis, with histology exhibiting severe epithelial granulomatous necrotic inflammation. Due to the unusual early, extensive and treatment-refractory fungal infection, genetic testing for predisposition for mycosis was performed and revealed a heterozygous mutation in the CARD 9 gene, inherited from the father where the same mutation could be detected (c.809a>T(p.Glu270Val)). After the identification of this a priori unsuspicious genetic aberration as the only possible reason for the fungal infections, an experimental treatment with recombinant IFN-g (rIFN-g; 100 µg subcutaneously, 3 times per week) was initiated on a compassionate use basis, with the idea to bypass the immunological ‘blindness’. This led to an almost complete resolution of the disseminated infections (Figure 1 b, d, f). During treatment with IFN-g, the only antimycotic therapy consisted in daily oral fluconazole. Due to the severe infectious complications, the patient’s chemotherapy was interrupted after only one course. However, the bone marrow remained in complete hematological remission. One year after initial diagnosis, the patient relapsed with a mixed phenotype acute leukemia (MPAL). IFN-g in combination with LAB was restarted as prophylaxis during relapse chemotherapy according to the AML BFM 2004 protocol. After achieving a second complete remission, he was transplanted from a matched unrelated donor. Despite the myeloablative and highly immunosuppressive conditioning regimen consisting of fludarabine, thiotepa, treosulfan and anti-human T-lymphocyte immuneglobulin (ATG Grafalonâ), he did not experience any mycotic complication while on IFN-g and LAB prophylaxis. 2.5 years after hematopoietic stem cell transplantation (HSCT), the patient experienced a second relapse with the previous MPAL clones. After remission-induction with cytarabine only (AML BFM 2004 induction modified: cytarabine 20 mg/m2 day (d) 1, 2x20 mg m2 d 2-3, 250 mg/m2 d 4-5), he was eligible for a second HSCT. The conditioning consisted of gemtuzumab ozogamicin, 12 Gy total body irradiation and etoposide, followed by transplantation with a T-repleted bone marrow graft from a haploidentical donor with administration of post-transplant cyclophosphamide. Despite the extensive and prolonged immunosuppression, no further mycosis was observed under IFN-g/LAB. To date the patient is well and in remission for more than 2 years. 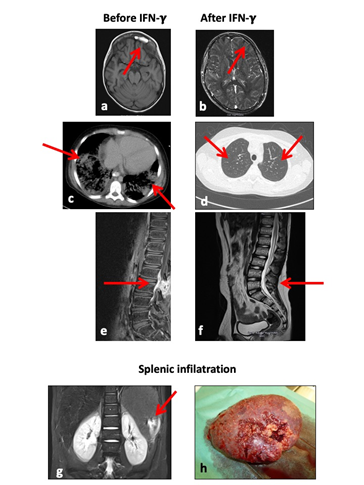 We report a very unusual case of a pediatric AML patient with a life-threatening, rapidly progressive disseminated invasive candidiasis, leading to MOF due to mycotic infiltration of almost all vital organs. Although invasive fungal infections in AML patients are common [1], such a serious, ubiquitously spread and refractory infection in a presumably immunocompetent individual should raise the suspicion for an underlying immunodeficiency. In our case, the previously healthy child developed an unexpected early occurrence of a completely treatment-refractory candida-sepsis, which lead to genetic testing for predisposition for mycosis and consecutively to the identification of a heterozygous CARD9 mutation. While IFN-g is used in adults to stimulate antifungal immune activity [13,15,16], little data are available for this kind of treatment in children. Based on the experience in children with chronic granulomatous disease [17], few case reports describe its use in children with invasive fungal infection and oncological diseases [18,19]. To our knowledge, this is the first case of a heterozygous CARD9 mutation with such a clinically relevant presentation and a successful IFN-g treatment in a pediatric patient with disseminated candida sepsis and AML. Given the increased mortality rate in oncological patients with IFI, and the apparently safe and well-tolerated application of IFN-g in children, awareness for potentially curable, molecularly proven IFI, warrants increased awareness and rewards molecular confirmation for an effective adjuvant treatment option in refractory patients. Most remarkably, this previously healthy child unmasked his predisposition only in the extreme situation of a massive immunosuppression so that, considering the wide heterogeneity of genetic mutations involved in susceptibility to fungal infections, genome-wide expression profiling might play an increasing role in the future in pediatric cancer patients, as knowledge of defective immune pathways might help to identify patients at risk early on [20].

The authors have no conflict of interest to disclose.