Sudden Death of an Asymptomatic Patient with Anomaly of the Circumflex Coronary Artery: An Autoptic Case

Coronary artery anomalies are a rare congenital heart anomaly including a large spectrum of defects. Of all coronary anomalies the anomalous origin of the circumflex artery is relatively common and mostly clinically silent. In some patients, it is diagnosed during angiography performed for chest pain or arrhythmia or acute coronary syndrome. We report an autoptic case with an abnormal circumflex coronary originating from the right coronary artery, in a 60-years-old man submitted to hyaluronic acid injection for gonarthrosis. No other pathologies were referred. The only atherosclerosis factor risk investigated was the cigarette smoking (10-15 cigarettes/die). A subocclusive stenosis (90%) of the origin of the abnormal circumflex and a stenosis of 50% of the anterior descendent artery were detected. According to classification criteria of coronary artery anomalies it is classified as “benign” and considered not able to lead neither myocardial ischemia nor sudden death. Otherwise, our case supports the hypothesis that an anomalous right-angle origin of an artery would favour early atherosclerosis and increase the risk of sudden death also in absence of other relevant risk factors for atherosclerosis.

Coronary artery anomalies (CAAs) are a relatively uncommon group of congenital disorders of coronary arterial anatomy with a prevalence of 0.2–2% in the general population and with a wide variety of clinical presentations. The frequency increases in angiographic series ranging from 0.6 to 5.64% and is about 0.3% in autopsy series [1]. CAAs encompass a spectrum of anomalies including abnormalities of origin, course, number, structure, and termination of the coronary arteries [2, 3]. Most patients with CAAs are asymptomatic but, sometimes the CAAs have been linked to ischemic heart disease, syncope, and sudden cardiac death [2, 3]. Today, these anomalies have generated considerable clinical interest because they constitute the second common cause of sudden cardiac death in young competitive athletes with hypertrophic heart [1]. Nomenclature and morphological classification system proposed by Angelini et al [2] and supported by Cademartiri et al [3] have been widely accepted. They proposed the following definition of coronary artery patterns: 1) Normal: any morphological pattern seen in > 1% of an unselected general population; 2) Normal variant: an alternative, relatively uncommon morphological pattern seen in > 1% of the same population; 3) Anomaly: a morphological pattern seen in < 1% of the same population. Rigatelli et al [4] proposed the classification of CAAs on the basis of seven angiographic patterns (1: hypoplasia/atresia, 2: hyperdominance, 3: fistula, 4: originating from other arteries, 5: originating from the wrong sinus, 6: splitting, and 7: tunneling) and four clinical significance classes (benign--class A, relevant--class B, severe--class C, and critical--class D). With the same risk factors for general population, an increased risk of coronary atherosclerosis has been observed in patients with congenital coronary artery anomalies [3-5]. Click et al (6) reported that stenosis is significantly greater in an anomalous circumflex artery than in a non-anomalous circumflex artery in control subjects matched for age, gender, symptoms, and degree of atherosclerosis of non-anomalous coronary arteries.

A 65-years-old-man, blacksmith, was hospitalized at the Policlinico Hospital of Bari, to undergo gonarthrosis treatment. At admission the patient did not refer any cardiovascular disease but only a mild hypercholesterolemia (210 mg/dl). He was a smoker of about 10-15 cigarettes/day. At the beginning of the procedure, the patient suddenly collapsed and died for cardiac arrest. The autopsy was performed. The heart showed a transmural dyschromic area of the posterior lateral wall of the left ventricle, which, at the histopathological evaluation revealed an acute myocardial ischemia (wavy fibers and fragmentation of cardiomyocytes) along with the morphological signs (fibrosis) of a previous posterolateral infarction of the left ventricle (Figure 1). 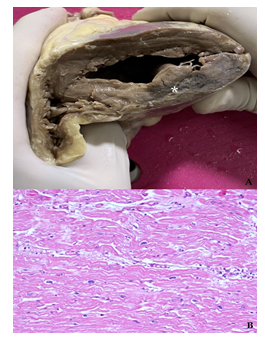 Figure 1: Transmural posterolateral infarction of the left ventricle indicated by a white asterisk (A). Histologically, myocardium shows diffuse wavy fibers suggestive of acute ventricular fibrillation because of ischemia (B).

After a closer investigation, an anomaly of the Left Circumflex Coronary Artery (LCX), which originated at right angles from the initial tract of the Right Coronary Artery (RCA), in proximity (<1 cm) of Valsalva sinus was observed. The artery in question was directed posteriorly between the aorta and right atrium, and then, crossing anteriorly to the left atrium, moved towards the obtuse margin of the heart (Figure 2). 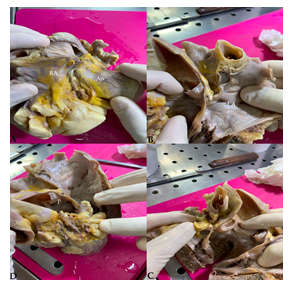 Figure 2: Anomalous origin and direction of the Left Circumflex Artery (LCX), which originates from the proximal tract of the right coronary artery (RCA), passes between the aortic root and the right atrium (A) and then between the aorta and the left atrium (B) to enter the left atrio-ventricular groove (C) and the lateral wall of the left ventricle (D). Ao Aorta; RA: Right Atrium; LA Left Atrium; A: Aortic Valve; P: Pulmonary Artery; * Circumflex Coronary Artery.

In section, the presence of a sub-occlusive stenosis (80%) of the proximal tract of the abnormal circumflex artery was detected (Figure 3). In addition, moderate coronary arteriosclerosis of the remaining epicardial coronary branches was found, with a maximum stenosis of 50% of the anterior descendant. 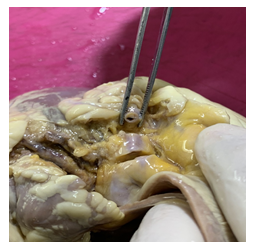 Different studies report that the anomalous origin of LCX from RCS/RCA was the most common Coronary Arteries Anomaly (CAA), but in others its prevalence was 0.4% of all CAA, being split right coronary artery the most frequent [5, 6]. In literature, this anomaly has been included in various classifications based on different criteria. The most used is based on the possibility of being able to generate heart attack or sudden cardiac death (clinical relevance). According to these data, the ectopic origin of the LCX from RCA is classified as "benign", since it is considered an anomaly not able, by itself, to lead neither to myocardial ischemia, nor to sudden death, but only to determine various degrees of atherosclerosis. In fact, the unusual angle of takeoff and more tortuous course of the proximal portion of the anomalous coronary artery predisposes it to accelerated atherosclerosis. This is because the junction point of the bound portion of the anomalous artery and the free portion as it wraps around the aorta is an area susceptible to lipid accumulation because of the mechanical stress (5, 6). Our reported case of sudden death, in an asymptomatic patient, highlights that a coronary obstruction is more frequent in abnormal coronaries even if these anomalies fall into a category considered “clinically benign”. Furthermore, in a sudden death of patients without evident cardiovascular risk factors, the accurate study of the course of coronary arteries is highly recommended. The strong discrepancy between the number of cases reported in angiographic studies and those described in in autopsy findings [7] should encourage to search such anomalies even in cases in which the death could be easily explained because of the occurrence of other risk factors.

Informed consent for publication was obtained from the wife of the patient.

In this section, you can acknowledge any support given which is not covered by the author contribution or funding sections. This may include administrative and technical support, or donations in kind (e.g., materials used for experiments).