Post-myocardial infarction ventricular septal defect has become a rare event following ST Elevation Myocardial Infarction (STEMI) but is still a life-threatening complication with high mortality. Transcatheter closure of post-myocardial infarction ventricular septal defects has emerged as an alternative therapeutic approach but often requires individual strategies due to complex morphology. We report a case of a 62-year-old man who was admitted to our hospital after STEMI of the inferior wall with pulmonary congestion due to a post-myocardial infarction VSD for interdisciplinary evaluation and therapy. The patient was characterized by estimated high perioperative risk and underwent interventional closure of the VSD according to heart team decision. Because of ragged nature of the VSD closure with a conventional Occlutech™ VSD occluder was not possible. Therefore, we decided to close the defect using an off-lable device for ASD closure which was successfully implanted without relevant residual shunt.

A 62-year-old male patient was initially diagnosed with a ST segment elevation myocardial infarction of the inferior wall. He presented with typical and progressive angina pectoris symptoms, dyspnoea at rest and asthenia since previous day. Coronary angiography revealed a proximal occlusion of the right coronary artery which was successfully treated by percutaneous coronary intervention with a coronary stent (2.5x24mm, drug eluting stent). Initial cardiac biomarkers were elevated and indicated an elapsed smouldering myocardial infarction with high-sensitive cardiac Troponin T 547.7 pg/ml (cut-off < 14 pg/ml), Creatine Kinase 605 U/l (< 190 U/l) and LDH 316 U/l (cut-off < 150 U/l). Four days after successful coronary recanalisation the patient developed symptoms of acute cardiac decompensation with incipient pulmonary congestion. A hemodynamically relevant post-myocardial infarction ventricular septal defect was observed by echocardiography. The patient was devoid of need for catecholamines and assigned for interdisciplinary evaluation and therapy. Echocardiographic analysis displayed a ragged and frayed VSD located in the basal to midventricular interventricular septum with relevant left-to-right shunt (Qp:Qs ratio 2.8:1). Due to estimated high perioperative risk precluding for surgical repair interdisciplinary heart team decision yielded a transcatheter closure of the hemodynamically relevant post-myocardial infarction VSD. Transcatheter VSD closure was performed eleven days after coronary angioplasty to allow for early myocardial remodeling following myocardial infarction and prevent hemodynamic deterioration of the patient at the same time. After detailed informed consent the patient was put under mild conscious sedation. Angiography with simultaneous and continous transoesophageal echocardiography imaging was performed. After VSD sizing (13mm x 13mm) a 9 French venous sheath over an arterio-venous-circuit-wire was placed and an Occlutech™ Muscular VSD Occluder 18mm (Occlutech International AB, Helsingborg, Sweden) was applied. Due to a ragged and fissured margin, stable positioning of the VSD occluder was not accomplished. Therefore, the interventional approach was revised, adjusted and an Occlutech™ Figulla® Flex II ASD Occluder 19.5mm was successfully implated sealing the VSD reducing the shunt immediately from 2.8 to 1.3. The patient recovered fast and was discharged at home after complete recompensation five days after transcatheter VSD closure without heart block or any other adverse events.

Transcatheter closure of post-myocardial infarction ventricular septal defects has emerged as an accepted and feasible alternative therapeutic approach [4-7]. Though, individual therapeutic strategies are necessary for sufficient closure adressing time of intervention and technique [9]. Timepoint for closure is controversially discussed. We observed an increasing congestive hepatopathy as a sign of therapy-refractory right heart failure with a need for early improvement. In our case we decided to close the VSD eleven days after STEMI to benefit from initiated myocardial remodeling processes and early hemodynamic improvement of the patient to avoid clinical impairment and decrease mortality. Closure in the chronic phase after myocardial infarction (>14 days after MI) seems to be characterized by lower morbidity and mortality and a higher rate of complete closure [5]. Scarring at the edges of the defect has to be taking into account as beneficial feature for successful closure [10]. Post-myocardial infarction ventricular septal defects are highly variable between patients and also vary in size and shape during the cardiac cycle [8] which determines suitability of the device. As in our case, RCA post-myocardial infarction VSDs tend to be more complex potentially because of more interdigitating fibers in the posterior interventricular groove [11] or the orientation of myocardial fibers to direct intramyocardial dissection along the inferior heart [8] and require individual decision-making in therapy. There are reported successful VSD closures using a VSD occluder device [8, 9, 12]. In our case, stable positioning of an Occlutech™ VSD Occluder was not accomplished due to anatomical requirements. We therefore applied an Occlutech™ ASD Occluder 19.5 mm with sufficient closure. There are only a few reports on individual cases with off-lable use of ASD occluders in VSD position after unsuccessful surgical closure [13] or very large post-infarction VSD [14]. In line with this, our case report highlights the necessity for individual decision-making depending on morphology in a ragged post-myocardial infarction VSD. 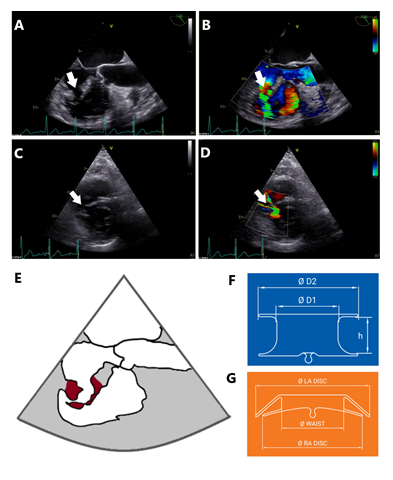 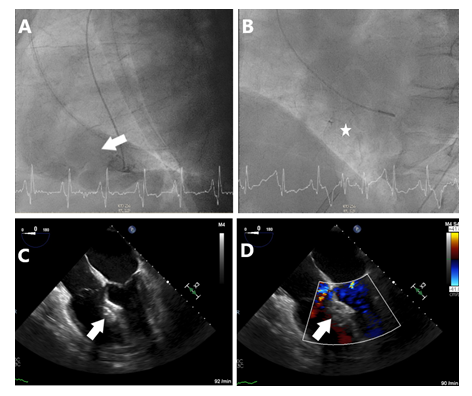 All authors have nothing to disclose.

All authors declared that there are no conflicts of interest.