Dermal filling has increasingly become one of the most popular nonsurgical aesthetic procedures performed worldwide. Among several types of dermal fillers available, hyaluronic acid filler plays an integral role as the material of choice for treating volume reduction associated with skin aging due to its many favorable properties. Claimed to be safe, effective and biocompatible, injection of hyaluronic acid filler sometimes brings about undesirable outcomes. Adverse events from hyaluronic acid filler range from acute and temporary events such as bruising and erythema to more serious and long-lasting sequalae, including granulomas and vascular occlusion. Here, we report a case of tumid lupus erythematosus associated with hyaluronic acid filler injection. To the best of our knowledge, this is the first report of tumid lupus erythematosus following injection of a dermal filler. Treatment with oral hydroxychloroquine and topical tacrolimus resulted in gradual improvement of the skin lesions with no sign of recurrence after 3 months of followup. In summary, we highlight the potential immunologic complications of hyaluronic acid filler injection and encourage the role of intradermal pretesting in susceptible individuals.

The use of dermal fillers has increased dramatically in the past few decades. At present, physicians have many different types of fillers to choose from, such as bovine and human collagen, hyaluronic acid (HA), calcium hydroxyl apatite, silicone and poly-L-lactic acid. Although various manufacturers claimed dermal fillers to be safe and nonimmunogenic, several reports have addressed complications that occurred with all compounds used [1]. HA, a major component of the extracellular matrix, is a glycosaminoglycan polymer composed of repeating units of monosaccharide D-glucuronic acid and N-acetyl-D-glucosamine. Due to its hydrophilic and viscoelastic properties, HA is capable of binding to large quantities of water to maintain the structural integrity of the tissue [2]. Currently, HA filler is often regarded as one of the most popular dermal fillers used for cosmetic purposes globally. HA can be derived from both animal and nonanimal sources. Recently, nonanimal stabilized HA (NASHA), a modified HA compound with fewer contaminant proteins, has been introduced to the market and is preferred for biomedical purposes considering its superior safety profile [3]. However, an increasing number of reports on unwanted outcomes from NASHA have continuously appeared [2]. It is now well-accepted that reactions to HA fillers are limited not only to the injection techniques but also to the body’s immune responses [1, 2, 4]. Herein, we communicate a case of tumid lupus erythematosus (TLE) following NASHA filler injection.

A 30-year-old healthy Thai woman presented with a 3-year history of gradually enlarging, painless, red rashes on both sides of her cheeks. She had a past history of HA injection to augment her cheeks 4 years ago. The patient had never been implanted with other fillers before. The rash started initially as small red lesions at exactly the injection points. She also noticed exacerbation of the rashes after sun exposure. The lesions were neither itchy nor tender. Physical examination revealed bilateral non-scaly erythematous edematous plaques with telangiectasias on both cheeks as shown in (Figure 1). There were no oral lesions or skin lesions elsewhere. The rest of the physical examination was within normal limits.

Incisional biopsy was performed, and the histopathological examination revealed superficial and deep perivascular infiltration with lymphocytes, histiocytes and a few eosinophils (Figure 2A, 2B). An Alcian blue special stain showed diffusely increased mucin deposition in the dermis (Figure 3A) and the immunohistochemistry staining demonstrated some CD123+ plasmacytoid dendritic cells in clusters within the infiltrate (Figure 3B). Direct immunofluorescence showed weak granular deposition of complement protein C3 but not immunoglobulin (Ig) G/IgM at the dermo-epidermal junction (data not shown). Cultures and PCR for bacteria, mycobacteria and fungi were negative. The examination of antinuclear antibodies was positive with a 1:320 titer in a homogeneous pattern; however, anti-double stranded DNA was negative. Other blood tests were unremarkable. Based on the typical clinical manifestations and histopathology, the diagnosis of TLE was established. 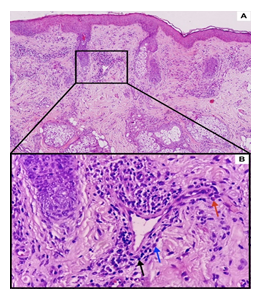 Figure 2: Hematoxylin and eosin (H&E) staining of lesional tissue (A) At 10× magnification, hematoxylin and eosin section reveals perivascular infiltration within the superficial and deep dermis. (B) Close-up view (40× magnification) of perivascular infiltration of lymphocytes (black arrow), histiocytes (blue arrow) and a few eosinophils (red arrow). There are neither epidermal abnormalities nor interface changes. No foreign body is seen.

The patient was treated with oral hydroxychloroquine 400 mg per day for one month, followed by 200 mg per day for two months together with topical tacrolimus. After 3 months of treatment, the erythema subsided with no sign of recurrence. Unfortunately, the patient was lost to follow-up due to COVID-19 outbreak in Thailand.

After its introduction to the market in the late 1990s, HA has been considered one of the safest and most effective injections for soft tissue augmentation [4]. Since HA and NASHA fillers have no tissue or species specificity, there should theoretically be no risk of immune-mediated reactions. However, accumulated evidence has addressed delayed immunologic adverse effects related to HA and NASHA fillers, and the latency time between HA injection and development of these side effects can range from months to several years [1,2,4].

We describe a unique case of TLE that occurred approximately 1 year after NASHA filler injection. Our case presented with typical clinical findings of TLE and histopathology revealed superficial and deep infiltration in the dermis. Due to the presence of eosinophils in our skin specimen, one might militate against a diagnosis of TLE but rather a dermal hypersensitivity reaction. However, in this patient, there are also positive antinuclear antibodies in homogeneous pattern, an increased dermal mucin deposition together with the plasmacytoid dendritic cells in clusters which serve as essential diagnostic marker in differentiating various subtypes of chronic lupus erythematosus from their mimickers [5]. Furthermore, we also performed CD4 and CD8 immunohistochemical staining and detected a predominance of CD4 over CD8 lymphocytes in the inflammatory infiltrate with a ratio of 3:1 (data not shown), which correlates with the criteria of TLE classification [5]. Based on the above-mentioned characteristics together with the excellent response to hydroxychloroquine, the diagnosis of TLE was finally made.

TLE is a subset of chronic cutaneous lupus erythematosus that classically presents with erythematous, edematous plaques on sun-exposed areas of the skin. Although its pathogenesis is unclear, immune dysregulation has been postulated to contribute to the pathogenesis of TLE, especially upregulation of regulatory T-cells and plasmacytoid dendritic cells; decrease of Langerhans cells; and upregulation of type-1 interferon, tumor necrosis factor-a, and T helper 17 cells. Interestingly, a case of systemic lupus erythematosus following polyalkylimide dermal filler injection has recently been reported, suggesting a possible causal relationship between dermal fillers and autoimmune manifestations [6]. In fact, many reports have indicated that systemic lupus erythematosus can be induced by vaccines, and immune reactions secondary to fillers have been shown to be linked with delayed-type hypersensitivity reactions [1,6,7]. Therefore, similar to vaccines, dermal fillers can activate certain T-cell populations and function as immunologic adjuvants. HA, like other fillers, could elicit autoimmune responses via macrophage and T-cell response cascade stimulation [6].

Although the causal association between NASHA fillers and TLE cannot be conclusively proven in our case, increasing evidence has addressed the capability of HA compounds to develop immune-mediated reactions. Immunologic reactions from HA fillers can originate from HA itself, from hyaluronan-associated proteins or from contaminated proteins/DNA in the product [1]. Evidence of immunogenicity from HA derivatives has been described in animal models and anti-HA antibodies have been detected in patients receiving HA fillers [8,9]. In addition, HA could act as a “superantigen” and directly initiate immune responses in a murine model [10]. Furthermore, the presence of contaminating DNA in HA products could induce proinflammatory cytokines, such as interleukin-12 and tumor necrosis factor-a and potentially trigger or exacerbate inflammation [11]. Moreover, a Spanish in vitro study found that treatment of human blood mononuclear cells with NASHA could trigger a low-grade immune inflammatory response resulting in T-cell activation [2].

Taken together, via multiple mechanisms, HA preparations are capable of provoking undesirable immune-mediated adverse effects. Our case highlights the possibility of autoimmune/immunologic side effects of NASHA filler injections and calls for further robust investigations to demonstrate a plausible link to elucidate this phenomenon. Given the rising popularity of HA filler injection, physicians should be aware of potential complications related to its use.

The authors wish to thank Kamonwat Chongkoltanalab for figure illustration and Michiyo Matsumoto for secretarial assistance.