Use of Multiple Perineural Adjuncts in Quadratus Lumborum Block and Lumbosacral Plexus Block to Provide Anesthesia for Hip Fracture Repair: A Case Report

Hip fracture is common among the elderly with multiple co-morbidities, and early surgery was shown to improve mortality and morbidity [1]. General or neuraxial anesthesia may be risky or even contraindicated in some of these patients, for instance, those with severe cardio-pulmonary diseases or chronic anticoagulation. Regional anesthesia (RA) is an attractive alternative as it offers advantages such as improved analgesia and avoidance of adverse effects from general anesthesia or neuraxial anesthesia [2]. Recently, a combination of Quadratus Lumborum Block (QLB) and lumbar Erector Spinae Plane (ESP) block has been reported as the main anesthetic method for a patient undergoing hemiarthroplasty [3]. With the current rekindled enthusiasm of regional anesthesia in hip fracture surgery, we would like to discuss a case with use of Lumbar Plexus Block (LPB), sacral plexus block (SPB) and QLB as the main anaesthetic method for a patient having gamma nail procedure. Multiple adjuncts including epinephrine, dexamethasone, dexmedetomidine, dextrose, meperidine and sodium bicarbonate were added to supplement the effect of Local Anesthetics (LA). Verbal consent was obtained from the patient’s son for the case to be published. The case report was written according to the CARE (Case Report) guideline [4].

A 93-year-old Chinese lady (body weight 42.8 kg) suffered from a trochanteric fracture of her right femur and was arranged to undergo gamma nail insertion. Her medical history included dementia, hypertension, myocardial infarction with percutaneous coronary intervention done, congestive heart failure with a reduced ejection fraction of 20%, atrial fibrillation on Apixaban and chronic kidney disease. General anesthesia was considered to be detrimental because of the poor cardiac reserve, while neuraxial anesthesia carried a risk of vertebral hematoma with the use of oral anticoagulant and renal impairment. Hence, regional anesthesia was employed as the main anesthetic method. Apixaban was withheld 3 days before the operation. Risks of RA including bleeding, nerve injury and Local Anaesthesic Systemic Toxicity (LAST) were explained to the patient's son as the patient was demented and could not understand the risks. Before commencing RA, arterial line was inserted for close blood pressure monitoring. The patient was then placed in the left lateral decubitus position. The LA mixture was prepared by adding 4 mg dexamethasone, 40 μg dexmedetomidine, 50 mg meperidine, 2 mL 8.4% sodium bicarbonate and 5.6 mL 5% dextrose solution to 15 mL 0.5% levobupivacaine and 15 mL 2% lignocaine with 1:200000 epinephrine, resulting in a total of 40 mL clear solution. LPB was first performed with the “Shamrock Method” [5], and a curved probe (Fujifilm Sonosite Edge; 2-5 MHz) was placed transversely on the lower flank to identify the lumbar spine. A 10 cm Pajunk Sonoplex® needle was inserted in an in-plane manner and 20 mL of the mixture was deposited in the lumbar paravertebral space which was confined by the neuroforamen medially, psoas major anteriorly and erector spinae posteriorly (Figure 1). SPB was then performed with the parasacral approach [6], and 10 mL was injected beneath the piriformis muscle in an out-of-plane fashion (Figure 2). Finally, QL1 block was performed with a linear probe (6-15 MHz) placed laterally above the iliac crest, and 10 mL was injected on the transversalis fascia plane between the transversus abdominis and the quadratus lumborum muscles (Figure 3). Total block time was 25 minutes, and time of block onset was 5 minutes, as demonstrated by pain-free passive movement of the operated hip. Twenty five μg of intravenous fentanyl was given prophylactically prior to the start of the operation. The patient was hemodynamically stable and did not complain of pain throughout the surgery and in the Post-Anesthetic Care Unit (PACU). She was prescribed regular oral paracetamol and tramadol for postoperative analgesia. Upon follow-up 24 hours after RA, the patient reported mild pain at rest and upon movement according to verbal rating scale. Even though Apixiban was resumed, there was no swelling or bruising at the injection sites suggesting hematoma formation. She was able to flex her hip up to 45 degrees and walk with a frame with assistance. 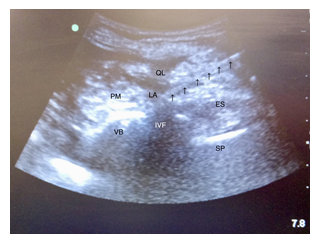 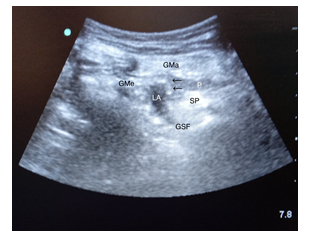 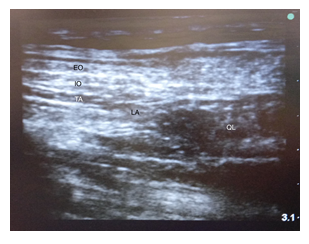 Patients suffering from hip fractures are commonly elderly with multiple comorbidities. Although regional block seems to be the best option for hip fracture surgery given its minimal physiological perturbation, they are seldom the only mode of anesthesia (1.4% in a systemic review from Whiting) [7]. There are several challenges that prevent widespread use of regional block as the sole anesthetic method. The hip joint is innervated by the lumbar plexus (L2-L4) and the sacral plexus (L4-S1) [8], while the superior aspect of the skin incision involves the subcostal (T12) and iliohypogastric (L1) nerves [9]. With LPB and SPB being deep blocks, they may be associated with severe complications like psoas hematoma [10]. However with the advent of high-resolution ultrasound machine, LPB can be accomplished by depositing LA posterior to the psoas muscle instead of in the psoas muscle as proposed by Chayen [11], which potentially lessens the risk of psoas hematoma. Another problem of performing hip fracture surgery under regional block alone is the delayed block onset. A case series by Petchara revealed that the onset time for combined lumbosacral plexus block was around 20 to 30 minutes, which occasionally required additional LA infiltration at the incision site [12]. In our case, the onset time was 5 minutes which was comparable to spinal anesthesia [13]. Sodium bicarbonate was shown to hasten the onset of both sensory and motor block by 2 minutes when ropivacaine was used for supraclavicular Brachial Plexus Block (BPB), which was explained by increasing the unionised fraction of LA [14]. Other than the opioid receptor mediated systemic effect, meperidine also independently blocks sensory and motor nerve conduction [15]. Perineural meperidine was demonstrated by Oztürk to quicken the onset of motor block and improve the motor block quality of lidocaine in axillary BPB [16]. While the analgesic mechanisms of dextrose are manifold [17], a randomised controlled study by Lim suggested that use of 5% dextrose instead of normal saline shortened the onset time of analgesia in supraclavicular BPB [18]. Postoperative analgesia is also of paramount importance in patient undergoing hip fracture repair, as optimal pain control allows early mobilisation which reduces delirium [19] and length of stay [20]. Dexmedetomidine is a unique adjunct that can both speed up block onset and prolong block duration [21], while dexamethasone is also another promising candidate. A systematic review by Sehmbi showed that perineural dexmedetomidine and dexamethasone extended the analgesic duration of supraclavicular block by 294 and 258 minutes respectively [22], while a randomised control trial by Zhang demonstrated a further lengthened analgesic duration when both perineural dexmedetomidine and dexamethasone were used instead of using either one of them [23]. However, perineural dexmedetomidine can cause sedation, bradycardia and hypotension. A dose of 50-60 μg should be adopted in order to strike a balance between the risks and benefits [21]. One may also argue that protracted motor block can delay postoperative mobilization and rehabilitation, but this did not happen in our case. Dexamethasone and dexmedetomidine exhibit differential prolongation of analgesia over motor block (518 minutes vs 294 minutes for dexamethasone, 318 minutes vs 258 minutes for dexmedetomidine) [22], which explains why our patient experienced long-lasting analgesic effect while still being able to actively mobilize. Other problems like incompatibility and neurotoxicity should also be looked out for. To date, this is the only case report that demonstrates the use of 6 perineural adjuncts in combined QLB, LPB and SPB is feasible and can bring about favorable clinical outcomes. Information garnered from postoperative follow-up also gave an insight into how perineural adjuncts may affect the course of recovery. The generalizability of this case report is limited by the fact that only one patient was included, and there was no control case to compare the onset and duration of regional block without using any adjuncts. Optimal doses of the perineural adjuncts are yet to be defined, requiring additional research. Last but not least, the patient in this case report had dementia, which limited the clinical assessment of the effect of the regional block.