Here we report a case of long-term survival with own liver in the patient of biliary atresia (BA) who developed hepatocellular carcinoma (HCC). The patient was a 34-year-old man. He underwent a portal jejunostomy with a diagnosis of BA (IIIb1ν) on the 94th day after birth, with a favorable post-operative course. Contrast-enhanced CT upon admission for cholangitis at the age of 34 suspected HCC, with an AFP level of 1.3 ng/ml and increased PIVKAII to 1,199 mAU/ml. He was diagnosed with HCC on MRI, and the tumor embolus had spread to the left branch of the portal vein; thus, resection and transplantation were considered contraindication. Proton therapy was performed, but he died 11 months after the detection of HCC. To date, 26 cases of HCC including this one have been reported, of which 20 were those in minors. Many of the patients with early onset have poor prognosis such as poor reduction of jaundice, while many of those with adult onset have relatively favorable prognosis as in this case; therefore, it was suggested that the progression of cholestatic cirrhosis is associated with carcinogenesis.

Biliary atresia (BA) is rarely considered to be associated with hepatocellular carcinoma (HCC) [1]. However, it is imaginable that cholestatic cirrhosis progresses slowly, which increases the risk of carcinogenesis. Therefore, it is expected that the patients who develop HCC will increase as long-term survival with patients’ own livers increases. However, few reports have described the occurrence of malignant tumors such as HCC, hepatoblastoma, and cholangiocarcinoma [1-3], and no guideline for their follow-up has been established that considers the possibility of developing malignant liver tumors. Here we report a case of a 34-year-old man who developed HCC in his own liver during the follow-up after the surgery of BA.

The patient was a 34-year-old man, who was born at a gestational age of 39 weeks with a birth weight of 2,926 g. He underwent a portal jejunostomy with a diagnosis of BA (IIIb1ν) on the 94th day after birth in our hospital. Thereafter, his course was generally smooth except for developing cholangitis at 3 months and 13 years after the surgery. CT at the age of 32 revealed bile stones in RY leg, liver right lobe atrophy, and left lobe hypertrophy, but not neoplastic lesion. Collateral circulation was also found, but endoscopy indicated that it required no treatment.

He visited our outpatient at the age of 34 with a chief complaint of fever and was admitted with a diagnosis of cholangitis. Contrast-enhanced CT imaging at the time of admission revealed a mass lesion with unclear borders in the right lobe of the liver and portal vein embolism that appeared to be continuous to it (Figure 1). HCC was suspected because portal vein embolism due to tumor was suspected. Measurements of tumor markers showed that AFP level was 1.3 ng/ml and PIVKA level was increased to 1,199 mAU/ml. Other blood test findings were T-Bil, 2.1 mg/dL; D-Bil, 1.2 mg/dL; AST, 293 IU/L; ALT, 207 IU/L; γ-GTP, 172 U/L; Alb, 2.7 mg/dL; APTT, 45.4 s; PT-INR, 1.73; FDP, 9.2 µg/mL; and D-dimmer, 3.5 µg/mL, which indicates the occurrence of mild clotting disorder. Child-Pugh classification was Grade B (score 9). Intrahepatic mass lesions could not be diagnosed in the contrast CT examination, so MRI was taken. MRI revealed a tumor that was not accompanied by ring enhancement in a T2-weighted image and gave low signals due to internal diffusion weighting at the same site as the above-mentioned tumor (Figure 2); thus, it was diagnosed as HCC together with an increase in tumor markers. Then, he was transferred to the department of gastroenterological medicine for treatment. The tumor embolism had already spread to the left branch of the portal vein, and resection and transplantation were considered contraindication. Proton therapy was started but was ineffective. He died 11 months after the detection of HCC. 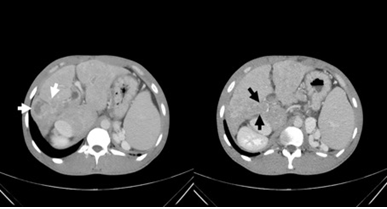 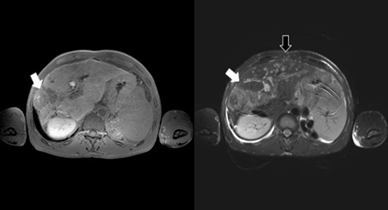 Figure 2: MR images obtained on admission. MRI revealed a tumor without ring enhancement in a T2-weighted image and gave low signals due to internal diffusion weighting at the same site as the tumor detected in CT imaging (white arrow). Multiple enhancing lesions with low signal central area in the left lobe indicated the hepatic micro abscesses due to cholangitis on a T2-weighted image (black arrow).

Known complications after BA surgery include cholangitis, cholestatic cirrhosis, and bile stones, with few reports describing the occurrence of HCC in patients’ own liver [1-3]. The Japanese clinical practice guideline for biliary atresia [1] states that “the occurrence of hepatocellular carcinoma is 0.5–1.3% and the age of its onset ranges from 0.7 years old to adulthood”. A follow-up survey conducted by the Japan Biliary Atresia Society in 2016 found no reported case of HCC; however, such cases could have been treated as “long-term complications and others”. Okuyama et al. [5] reported the cases of HCC occurrence after BA surgery in 1965, and thereafter a total of 25 cases have been reported from Japan and overseas [5-21], of which 10 were from Japan [6-11, 18, 21].

Review of 26 cases including this case indicated that HCC had developed in the patients younger than 20 years old in 20 cases. Of these, 15 cases were the occurrence in the patients younger than 10 years old; thus, the occurrence in young people was noticeable (Table 1). Of these 20 cases of the occurrence in younger ages, all 17 with the description of BA history had failed to obtain reduced jaundice after hepatic portal jejunostomy. Even when reduced jaundice was obtained, the patients followed the course of repeated cholangitis or requiring reoperation. On the other hand, all the 3 cases including this case where HCC development was in their 30’s showed relatively good prognosis with reduced jaundice obtained in all of them [18, 21]. Taken together, these results suggest that early progression of cholestatic cirrhosis in BA due to poor reduction of jaundice and recurrent cholangitis is a risk factor of young onset of HCC. On the other hand, even in long-term survival cases with good reduction of jaundice, it is likely that the risk of HCC development increases as cholestatic cirrhosis progresses slowly over a long period of time. The cases like this case is expected to increase in the future. The small number of the reports of HCC cases is likely to be associated with the decrease in the number of patients who are living with their own liver under uncontrolled states due to the spread of liver transplantation. Regarding sex, 15 out of 26 cases were male. Considering that BA is more common among women, men may be more prone to develop HCC.

As for the opportunity of detecting HCC, only 8 cases out of 25 described were detected during regular follow-up of BA. Eight cases were detected accidentally during the scrutiny of jaundice and ascites as well as the examination for transplantation. In 9 cases, HCC was first detected at the time of necropsy or in transplanted livers. Therefore, early detection of HCC was considered to be a future challenge in the long-term follow-up of BA (Table 1). In BA, fibrosis of own liver parenchyma has progressed due to cholestasis, making it difficult to find tumors by ultrasonography alone. Abdominal ultrasonography only visualized the lesion as the one with unclear boundary in this case. Contrast-enhanced CT did not lead to diagnosis, either. And, MRI findings finally led to the diagnosis of HCC. Some reports recommend regular follow-up by MRI to ensure the accuracy and to avoid radiation exposure [13, 14, 16, 20]. These facts led us to consider it necessary to accumulate more data on the selection of subject cases (states) and the frequency of performing MRI.

The course of this case and literature reviewing indicate that follow-up should be done on the assumption that patients’ own livers are in the states of cholestatic cirrhosis after the BA surgery even when jaundice is reduced and that they are at the risk of developing HCC. In addition, literature reviewing demonstrated that HCC can occur while young in the cases with poor reduction of jaundice and repeated cholangitis. We consider that long-term management considering the risk of carcinogenesis in cholestatic cirrhosis is required even for long-lived patients with their own livers, and that consulting with and transferring to adult gastroenterologists are also important. As experienced in this case, some HCCs can be difficult to find by abdominal ultrasonography or contrast-enhanced CT. In addition, it should be noted that AFP levels do not increase in some cases of HCC.

Written informed consent was obtained from the patient for publications of this case reports and any accompanying images.

This research did not receive any specific grant from funding agencies in the public, commercial or not-for-profit sectors.

The authors declare no conflicts of interest in association with the present study.

We would like to thank Mr. Brian Quinn for editing the English language of this manuscript.