A New Patient of Chanarin Dorfman Syndrome in Egypt

Chanarin Dorfman syndrome (CDS) is an autosomal recessive neutral lipid storage disorder characterized by ichthyosis, and multisystem affection. Here, we report another patient from Egypt. The clinical data from a patient and his family were collected. DNA was isolated from peripheral blood leukocytes. Coding exons and the flanking introns of ABHD5 gene were PCR amplified, purified, and sequenced. Our patient meets the major clinical symptoms of CDS. Direct sequencing of ABHD5 gene led to the identification of a homozygous single nucleotide change (c.700C>T) in our patient. The parents were both heterozygous carriers, while his sister was wild type normal for the identified variant. In conclusion, these results indicate that p.Arg234Ter is a pathogenic mutation associated with the Chanarin-Dorfman syndrome in our patient in this study.

Chanarin -Dorfman syndrome (CDS) is an autosomal recessive neutral lipid storage disorder, which is characterized by congenital ichthyosis, lipid vacuoles in peripheral leucocytes, and multisystem affection [1]. At birth, affected individuals usually present with dry, scaly skin. Additional features include hepatomegaly, ataxia, hearing loss, short stature, muscle weakness, nystagmus, and mild intellectual disability [2]. This condition is caused by mutations in the ABHD5 which is broadly expressed in different tissues, including skeletal muscle, lymphocytes, skin, liver, and brain. Therefore, any impairment in ABDH5 expression may lead to many complications in various tissues [3]. We have reported previously a patient from Egypt in 2003, and here we present another patient of CDS from Egypt.

A 15-month-old male presented with generalized erythematous scaling since birth, with no bullous lesions, associated with gradual abdominal swelling. There was no history of visual, hearing or any focal neurological deficits. He was the first child of first cousin consanguineous marriage, with no previous pregnancy loss and no other family member had been similarly affected. Skin examination revealed generalized erythematous fine scaly patches with peeling of hands and trunk (Figure 1A). On examination of his abdomen a 10 cm firm, non tender hepatomegaly was found. The nervous system examination was normal. His anthropometric measurements (length-for-age, weight-for-age, head circumference-for-age, and weight-for-length) were all below the third percentile according to the CDC (Centre for Disease Control) growth charts. A small ASD was discovered accidentally during his echocardiographic examination. Complete blood film, liver functions, lipid profile, liver biopsy, bone marrow aspiration was done for the affected child and genetic testing was ordered for the boy and his family

Figure 1: Clinical findings and investigations of the patient. A: generalized erythematous fine scaly patches associated with peeling of hands and trunk. B: the peripheral smear shows leucocytic vacuolations in the neutrophils (Jordan's anomaly). C: The electron microscopic examination shows the excess number of non membrane bound lipid droplets in the hepatocytes. 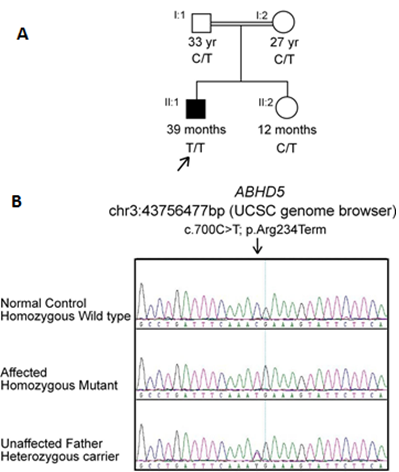 Figure 2: (A) Pedigree of the families studied with Chanarin-Dorfman syndrome demonstrating the recessive inheritance pattern. Filled symbols indicate affected individual. (B) Identification of a mutation in ABHD5. Sequencing chromatogram indicates the homozygous wild type, homozygous mutant and heterozygous carrier forms. Homozygous c.700C>T (p.Arg234Ter) mutation is identified in our patient (II:1). Nucleotide and amino acid numbering correspond to NM_016006.5 for the cDNA and NP_057090.2 for the protein. Nucleotides were numbered using the A of the ATG translation initiation codon as +1 nucleotide of the coding sequence.

Direct sequencing of ABHD5 gene led to the identification of a homozygous single nucleotide change (c.700C>T) in the index case (II:1 from pedigree, Figure 2A). At the protein level, this transition introduced a stop codon at amino acid position 234 (p.Arg234Ter) (Figure 2B). In order to confirm this mutation and to examine its segregation through the family, Sanger sequencing was performed for the parents and sibling who were all healthy and show no signs or symptoms related to the disorder. The parents were both heterozygous carriers, while his sister was wild type normal for the identified variant.

Chanarin- Dorfman syndrome (CDS) is one of the Neutral lipid storage diseases (NLSDs) characterized by an impairment in the triacylglycerol degradation and its abnormal accumulation in cytoplasmic lipid droplets present in most tissues [4]. Our patient meets the major clinical symptoms of CDS, which are non-bullous congenital ichthyosiform erythroderma [5], hepatomegaly and liver steatosis [6]. Clinical evidence of myopathy usually appears late [7] which could explain that our patient doesn’t have clinical muscle affection, supported by normal CPK. Also, he doesn’t have any neurological impairment, ataxia, nystagmus, or neurosensory deafness; these are late manifestations of the disease as triglyceride storage does not affect the central nervous system before middle age [8]. Hepatic involvement is known to be variable in CDS and liver biopsy is of great importance in reaching a diagnosis. Although our patient had liver function tests within normal range except for slightly elevated ALT, liver biopsy showed steatosis, in addition to the characteristic lipid droplets. The liver is clinically affected in 64% of CDS patients; however the increased liver enzymes and histological steatohepatitis are found in the 100% CDS patients with or without hepatomegaly [9].

Serum lipid pro?le has been inconsistent in various reports. Some patients had elevated triglyceride levels and very low density lipoproteins [10], while our patient had normal serum triglycerides similar to what was previously reported by [4, 11]. The clinical diagnosis of CDS is based on observation of Jordans’ bodies [12], which is also described in our patient’s peripheral neutrophils and their myeloid precursors in bone marrow.

Apart from the features described above, our patient had a congenital heart disease (ASD) which is an association not reported before with CDS. The identified homozygous stop gain, mutation (p.Arg234Ter) inABHD5gene, which encodes for Abhydrolase Domain-Containing protein, is predicted to result in a premature stop codon and an extremely truncated protein. To date, there are 38 different mutations in ABHD5, which cause Chanarin-Dorfman syndrome (The Human Gene Mutation Database, HGMD; http://www.hgmd.cf.ac.uk/). The variant mutation identified in our study (HGMD: CM052822) has been previously reported [13].

Collectively, these results indicate that p.Arg234Ter is pathogenic mutation associated with the Chanarin-Dorfman syndrome found in our patient in this study.

The study was approved by the Institutional ethical committee of Ain Shams University Hospital, Egypt.

Written informed consent was obtained from the parent of the participating children.

All the authors declare that they have no conflicts of interest.