Recently, increasing attention has been paid to late effects of chemotherapy. Even if cardiovascular and nervous toxicity is more often described [1-2], also skin and soft tissues are involved. Herein we reported 2 cases of chemotherapy-induced fibro-sclerotic panniculopathy.

Case one is a 68 year old woman affected by breast cancer (left breast), treated surgically. Sentinel lymph node was negative. She underwent 4 cycles of epirubicine and cyclophosfamide (January-February 2017), followed by 12 cycles of paclitaxel (March-June 2017). In anamnesis she referred Raynaud phenomenon. The patient presented on April 2017 with asymptomatic non-inflammatory nodules intermixed with raised and depressed areas of her right forearm (Figure 1). The diagnosis of a chemotherapy-induced fibro-sclerotic panniculopathy, grade III according to Nürnberger and Müller classification [3], was made.

Case two is a 43 year old woman, affected by breast cancer (left breast) surgically treated in February 2018, followed by 4 cycles of fluoruracile, cyclophosfamide and epirubicine (May-June 2018) and subsequently 12 cycles of paclitaxel (July-November 2018). Anamnesis was negative, except for a Hashimoto’s thyroiditis and a thrombotic phlebitis of her right arm after the first chemotherapy infusion. The patient presented on July 2018 with asymptomatic non-inflammatory nodules intermixed with raised and depressed areas of her right forearm. The diagnosis of a chemotherapy-induced fibro-sclerotic panniculopathy, grade III [3], was made (Figure 2). 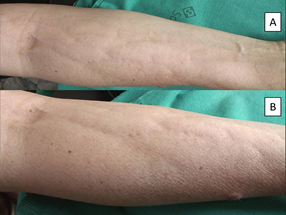 Figure 2: Non-inflammatory nodules intermixed with raised and depressed areas of the patient’s right forearm. A: minor magnification. B: greater magnification.

To our knowledge these are the first cases of fibro-sclerotic panniculopathy in patients receiving chemotherapy. The cases reported above are not characterized by inflammation, and no inflammatory signs, such as erythema or warmth, were present, having a clinical aspect similar to lipodystrophy [3-5]. Even though drug-induced panniculitis have been reported in association to chemotherapy [6-7], our cases do not enter in differential diagnosis with panniculitis, because of the lack of an inflammatory component, and because clinical aspect is completely different.

Curri et al. [5] described the pathogenesis of lipodystrophy asserting that alterations in venous and lymphatic micro-circle leads to a tissutal hypo-oxygenation, and glycosaminoglycan (GAG) deposition in capillary walls with a subsequently stasis of circulation and interstitial accumulation of fluid and catabolites [4-5]. These alterations drive to a cell suffering, with more and more accumulation of toxic molecules, interfering with cell oxygenation and nutrition. As a response, it is possible that, in predisposed patients, pro-fibrotic cytokines are released, eliciting neovascularization and thickening and sclerosis of fibrous septae with the production of collagen fiber, which arrange adipocytes, producing clusters of adipocytes pads [4-5]. Moreover, some gene polymorphisms have been associated with lipodystrophy, validating the role of a subjective predisposition [8].

Standing to this clinical similitude, we hypothesize that also the pathogenesis of our cases could full fit with the one descripted by Curri, with the crucial difference in the causative agent, that in our cases is chemotherapy. It is well known that chemotherapeutic agents are able to induce an endothelium damage with different mechanisms: inducing apoptosis of endothelium cells (cyclophosphamide and 5-FU); through a direct cytotoxic effect (5-FU); producing reactive oxygen species (5-FU and doxorubicin); influencing angiogenesis (taxanes) [9].

It is important to underline that panniculopathy in our patients is contralateral respect to the cancer site, but ipsilateral to the peripherally inserted central catheter (PICC). For this reason, we suggest that its pathogenesis is due to drug accumulation, that could be worsened by inflammatory events such as thrombotic phlebitis in the second case. Even if it is reasonable that the presence of autoimmune traits such as Reynaud’s phenomenon and Hashimoto Thyroiditis may have contributed to cause the fibro-sclerotic panniculopathy after chemotherapy, we do not consider it a determinant factor. Firstly, because these autoimmune conditions are very frequent in women, conversely not so many fibro-sclerotic panniculopathy have been described, and anyway up to date no data is available. Surely a skin biopsy should have been the correct procedure to be carried out, in order to highlight the cellular infiltration or the fibrotic tissue, but both our patients refused it.

The one we describe should be considered a late effect of chemotherapy, and a higher attention must be paid, because they are less alarming than acute ones, but they could have severe sequel even so. Moreover, cutaneous involvement could be a sentinel of damage to other organs, which are not so evident but have to be investigated.

All the authors disclose any financial, consulting, and personal relationships with other people or organizations that could influence (bias) the author’s work. We also disclose any scientific writing assistance, any grant support and numbers (including NIH/Wellcome-funded papers), and any statements of employment.