From 1990 to 2015, maternal mortality has decline by 43.9 per cent worldwide. In sub-Saharan Africa countries including Togo, it’s still a great concern. Sustainable Development Goals recommend to achieve a maternal mortality ratio of less than 70 maternal deaths per 100,000 live births by 2030. We report a case of maternal death of a Christian pregnant woman that occurred in Haho health district in 2018. Data were collected through a review of registers, medical and antenatal records and verbal autopsy. The deceased suffered of severe pre-eclampsia like during her two previous pregnancies that ended with two stillbirths, but this time around she could not survive it despite the six antenatal visits with a gynaeco-obstetrician. Actually, she had the strong believe that the two stillbirths was uncommon and a result of a spell cast on her, and that only her faith through prayers could deliver her. Therefore, she did not comply with her reference to a hospital with a surgical service for a cesarean delivery. Her death was preventable. There is a need to strengthen patients’ therapeutic education and communication around diseases especially during pregnancies in order to help them know what faith cannot help achieve.

Since the beginning of the 21st century, world leaders have committed that no woman should not die while trying to give birth [1]. Therefore, founds have been made available to support any action that would help achieve this sustainable development goal. Many progresses have been made and the incidence of maternal deaths have declined from 987 per 100,000 live births in 1990 to 546 per 100,000 live births in 2015 in sub-Saharan Africa [1, 2]. Despite this commitment, there is still some cases of maternal deaths that usually call for many interrogations. A part from the common and principal causes of maternal deaths known, there are some multifactorial reported maternal deaths that could be prevented [3]. One of them in the evolving context of social disparities in low- and middle-income countries, is the fact that people have more and more to rely on their faith to get heal from their diseases. On the process, out of their strong believe on their faith, some people use to die while it was possible to save them by implementing known therapeutic protocols that were proven to work on others. One of the diseases in pregnant women that has a protocol of treatment is the pre-eclampsia [4]. More and more pregnant women survive it if there is not any other specific comorbidity add to it. But unfortunately, the present case we are reporting, though she has no comorbidity associated to her pre-eclampsia did not survive it.

The deceased, Miss D.A. was third time gravid with an history of two stillbirths during her last two pregnancies. She was a fatherless of 25-year-old, of primary school educational level, seamstress of christian religion, living in couple for three years at Adakpamé in Health District No. 2 (HD-II) in Lomé. The present pregnancy was of 37 weeks + 3 days according to the date of her last menstrual period at the date of her death. She first attended Adakpame’s hospital for antenatal consultation on March 15, 2018 when the pregnancy was 12 weeks. She later on attended six-time antenatal consultation (Table 1). After the first antenatal consultation the deceased was transferred from the midwife's consultation to that of the gynaeco-obstetrician for poor obstetrical history and short inter-reproductive interval. During her follow-up, the blood pressure (BP) started rising (130/80 mmHg) without detectable albuminuria at 30 weeks term and she was prescribed medical rest and etifoxine hydrochloride twice daily. At her last attendant on September 5, 2018, her BP was 150/90 mmHg with an albuminuria above 10 grams per liter, important lower limbs edema, weakness and breathlessness. A diagnosis of severe pre-eclampsia was established on that base and Miss D.A. was directed to Bè hospital in Health District No. 3 (HD-III) that have surgical facilities for urgent care and caesarean section (Figure 1).

Table 1: Records of parameters during antenatal consultation of Miss D.A. 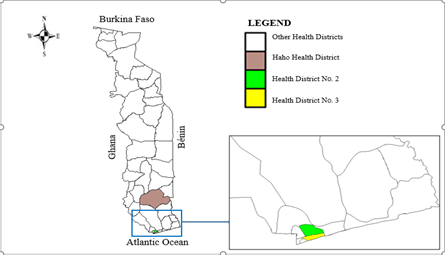 She was prescribed before being transferred, methyldopa three time daily and magnesium twice daily in addition of all the systematic supplementations during a pregnancy that she has been taking since the beginning of this pregnancy (Iron daily, and Sulfadoxine-pyrimethamine monthly to prevent malaria). Instead of going to Bè’s hospital, in the evening of the same day and out of the knowing of her husband, the deceased went to a prayer camp named “Jesus is the solution” located at Kpové in Haho health district, about 75 miles far away from Lomé, her usual residence. It was in that camp and during the night prayers, that she had generalized tonic and clonic seizures around 5am on September 06, 2018. She was carried to Haho’s district hospital where she was admitted at 9:25 am. The initial checking on her by maternity team at Haho’s district hospital has revealed a BP at 150/10 mmHg, albuminuria above 10 grams per liter and an unquoted state of coma with restlessness. A diagnosis of an eclamptic coma was establish and a treatment made of magnesium sulfate (4 grams intravenous + 10 grams intramuscular) and nicardipine (20 milligrams through slow perfusion) according to the national protocol of management of eclampsia, was immediately initiated and it is while she was undergoing resuscitation measures before being admitted in the operating room for caesarean section that she died at 9:46 am.

When questioned, the goodwill who carried the deceased from the prayer camp to the hospital said: “this lady, I don’t know her, I noticed her yesterday during the prayers as she was pregnant; we were still praying when she felt down and we prayed harder until she calmed down. But as she was pregnant and I saw her still on the ground and nobody cared about it, I just decided to take her to a hospital; I was just trying to help”.

After investigation, maternity staff of Haho’s district hospital found out that the methyldopa and magnesium prescribed at Bè hospital were bought but still untouched in their packaging. The family of Miss D.A. was met on August 02, 2019 for further details. They reported that the deceased was strongly convinced that the two stillbirth she had in the past were linked to a spell cast on her and that only prayers can save her during this new pregnancy so that she will be able to give birth. She tried several times to go to the prayer camp “Jesus is the solution” because she overheard that all problems even her own can be solve there, but her husband never allow her. The husband even states: “My wife was very attached to the idea of ??a spell cast on her responsible of her repeated stillbirths, and I do not know why despite I forbid her going to this prayer camp, and I even bought the medication prescribed at Adakpame’s hospital and give her money to attend the referral center, she stubbornly went there, and I have to be called by people from Haho’s district hospital that my wife is dead, it hurts me but this is life”.

The death of Miss D.A. could be prevented. Pre-eclampsia incidence in pregnancies is still increasing especially in women that have risk factors or predisposing factors [5] but the proportional morbidity imputable to pre-eclampsia is decreasing [6, 7]. This is because the treatment and management of pre-eclampsia has known a lot of progress and is more codified [4, 8]. There are many evidences that shows that the protocols to treat pre-eclampsia, if initiated on time, helps prevent unfavorable outcomes like eclampsia and more, maternal deaths [4]. In this case the patient died because she did not attend the referral hospital on time and she did not take the pretransfer medication. When analyzed carefully, all this has happened because in the first place, the deceased has the strong belief that her case was not a treatable one and that only prayers to her lord could help her deliver safely this time around as she has been in the same clinical presentation during her last pregnancies which ended with two stillbirth. Secondly, in the prayer camp, when the deceased starts seizing, people around her should have taken her quickly to the hospital that she may have survive; instead, they were still praying assuming this seizures were the result of their prayers and that the devilish in her responsible of her condition during pregnancies, was being thrown out of her, and this, till she stops seizing as reported by the goodwill. These seizures that appeared are a common complication of unmanaged severe pre-eclampsia which has an established protocol of treatment in accredited hospitals in the country; and many patients in that situation have survive it [9]. From 5am she starts seizing to 9:25am the case could not reach Haho’s district hospital which is normally reachable in 30 minutes time maximum from the prayer camp; the deceased could have been brought to the hospital in 30 minutes time since 5am she started seizing. This point out two situations that may have resulted in the unfavorable outcome: the late request for medical services or facilities by patients in our conditions of low- and middle-income countries [10, 11] even if they do not exist or they exist and also the lack of information and knowledge concerning what should be considered as an emergency or not [2]. The phenomenon of new churches in sub-Saharan countries, created anyhow without control and regulations, pretending that they have the solution to all the problems [12], even clinical known diseases with establish treatment is an important issue in this case presentation. The importance of spirituality or faith in a patient psychological stability, essential for his organic illness recovery have been demonstrated [13, 14]; apart from that evidence, patients have to know when to overcome their faith and refer to medical treatment of their clinical conditions. Besides, scientific reasoning and religious reasoning called faith, complement one another in one individual [15, 16].

The case reported here has shown the limit that faith should not cross in order not to be detrimental for the patient, for, there are evidences of what faith and spirituality can help stabilize in one patient and what they cannot help for. It has also point out some organizational lacks in healthcare systems of low- and middle-income countries like Togo that happened to have caused this maternal death in a condition of severe pre-eclampsia. Therefore, it is important for healthcare authorities and healthcare practitioners to emphasize on therapeutic education and more explanation to patients about their conditions each time it is right, on a multidisciplinary basis. It is also important that spiritual leaders should consider trying to collaborate more with healthcare practitioners to save lives on a holistic treatment approach of any person they get in contact with.

This study has the approval of Haho health district coordination. The deceased family members encountered during the investigation have given informed consent for this case report.