A Rare Fatal Case of Cardiac Perforation During Cardioverter-Defibrillator Implantation

Right ventricular perforation is a rare but fatal complication during implantation and removal of cardiac devices. The causes of such an event are not well defined, although among the various factors involved, the thickness of the ventricular wall and the force exerted by the operator appear to be important. We report here a case of fatal cardiac resynchronization therapy with defibrillation in a patient without apparent predictive factors for perforation. This case highlights the importance of revisiting the diagnostic pathways before introduction of a cardiac device, and of further studies on the predictive factors, to avoid a complication being considered as a surgical error.

A fatal case during implantation for cardiac resynchronization therapy with defibrillation (CRT-D) is described here. This was characterized by cardiac perforation with tamponade that occurred during the procedure.

A man aged 77 with chronic ischemic heart disease and who had undergone multiple percutaneous coronary revascularization procedures was admitted to the Department of Cardiology for CRT-D. At admission, his arterial pressure was 125/70 mmHg, his heart rate was 70 bpm, as arrhythmic with frequent extrasystoles. His left ventricular ejection fraction was 34%, with New York Heart Association functional class III. He also reported worsening dyspnea with ankle edema. After pharmacological therapy, the patient underwent implantation of an implantable cardioverter defibrillator (ICD).

After the introduction and placement of the electrocatheter in the right ventricle and auricle, the patient suddenly showed hypotension, progressive bradycardia, and loss of consciousness, with evidence of pericardial effusion with hypo-akinesia of both ventricles. Despite resuscitation maneuvers and pericardiocentesis attempts, the patient died.

An autopsy was performed 24 h later. Upon opening of the pericardium was seen to contain about 400 mL of partially coagulated blood. On following the internal course of the ICD leads, these were seen to be well positioned in the left subclavian vein, the right atrium, and the right ventricle. At the end of the ventricular catheter, there was a full-thickness laceration of the posterolateral wall of the right ventricle at the apex. Measurement in this site showed a wall thickness of ~0.4 mm (Figure 1). 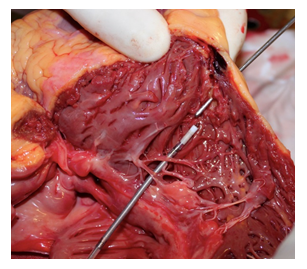 Multiple signs were also seen of previous myocardial infarction with double coronary stenting of the left and right coronary arteries. No other significant alterations were seen that were relevant to the case. For the perforation site, the histological findings showed the important replacement of myocardial muscle by adipose tissue.

The use of ICDs is based on the introduction of transvenous leads that provide electrical impulses to defibrillate the heart, with the interruption of potentially fatal arrhythmias. Some models also provide biventricular stimulation to restore the synchrony of the ventricular contraction (i.e., CRT-D). Despite the effectiveness of the procedures, with a reported success rate of 94.4% [2], CRT-D is associated with complications secondary to the introduction and removal of the transvenous leads [3]. These complications can be divided into major and minor, according to their severity. Those of a mechanical nature (e.g., perforation, pericardial effusion or tamponade, pneumothorax, hemothorax) have been reported in 3.2% of cases, while problems with dislocation or repositioning of the leads account for 6.2%, and infections for 1.4% [4, 5]. Peri-procedural deaths have been reported to occur in 0.3% of cases [4], with the deaths considered secondary to the procedure if they are caused by mechanical complication or acute clinical deterioration during or after the procedure [6].

Among the major peri-procedural complications (i.e., those occurring within 24 h), our interest is directed toward the risk of cardiac perforation. This rare but potentially fatal complication can lead to hemopericardium, cardiac tamponade, and death [7]. Right ventricular perforation is an uncommon but life-threatening complication that can occur secondary to the positioning of a pacemaker or an ICD, with reported incidence of 0.1% to 0.8% and 0.6% to 5.2%, respectively [8 – 11]. Although the perforation rates reported have varied across different studies (e.g., 0.1-3% [7]; 0.7% [6, 12]; 0.32% [13]), the data can be considered as substantially uniform. In particular, for CRT-D the cardiac perforation rate reported is 0.24-0.48% [14]. Several predictive factors have been associated with the risk of cardiac puncture during placement of an ICD, including sex, age, body mass index, type of ICD, type of procedure, operator experience, procedure priority (i.e., emergency, elective) [2], use of steroids and concurrent anticoagulant therapy [8], worsened New York Heart Association Class and non-ischemic cardiomyopathy [15].

Female sex represents an independent risk factor for cardiac perforation [16]; is reported that women have a 30% higher risk of any complication, mainly due to cardiac perforation [2], and that about half (49%) patients who develop this cardiac event were female [14]. This gender difference could be due to hormonal differences, body composition and in particular, to the possibility that women may have cardiac anatomical features predisposing perforation as a thinner right ventricular wall [14, 15, 17]. In addition, the body mass index is a significant predictive factor for early complications related to the procedure in women [17], generally underweight is associated with an increased risk of overall complications like the use of antithrombotic [18] and chronic steroids [19].

The thicknesses of the atrial and ventricular cardiac walls represent a further risk factor [20]. Indeed, perforations generally involve areas with thinner walls, such as the apex of the right ventricle, rather than the interventricular septum [8, 21], while perforations are less common with right ventricular hypertrophy [8, 10]. This demonstrates that the characteristics of the cardiac muscle can promote or protect from iatrogenic perforation. The mechanisms responsible for the occurrence of perforations are not well understood, although this is considered multifactorial and to be correlated to the size of the electrocatheter and the pressure from the force exerted on the thin conductors. Therefore, perforations might derive from an imbalance between the force exerted by the tip of the electrocatheter and the resistance of the ventricular wall [7]. A smaller lead diameter was associated with a greater risk of cardiac perforation; in fact, it is possible that a tip with a smaller diameter implies greater force on the myocardium predisposing to myocardial perforation [15] independently of the mechanical pressure exercised by the operator.

The present case confirms this characteristic. Indeed, during the autopsy, full-thickness perforation of the apex of the right ventricle was seen, which was caused by the electrocatheter. The measurements indicated a right parietal thickness of 0.4 mm at the perforation site. In this area, the histological findings revealed the important replacement of myocardial muscle by adipose tissue in the absence of previous post-ischemic tissue alterations. Retrospective evaluation of this uncommon complication allows us to highlight the importance of a further predictive factor that would appear to have been little investigated: the wall thickness. The main known protective factor for cardiac perforation is right ventricular systolic pressure >35 mm Hg [10]. To the best of our knowledge, no other protective factors have been reported in the literature other than parietal hypertrophy and right ventricular systolic pressure.

Our case highlights the importance of studying the characteristics of the right ventricular wall in patients with indication for treatment with implantable cardiac devices. The latest available update of the guidelines for echocardiographic evaluation (method more widely available than cardiac magnetic resonance imaging) and various authors [22] highlight the intrinsic difficulties of ultrasound evaluation together with the lack of criteria to define an abnormally right ventricle wall thin [23].

Our case highlights the importance of revisiting the diagnostic pathways before the introduction of a cardiac device. In patients with greater risk secondary to previous myocardial infarction, further studies of the cardiac wall thickness and composition would be desirable before implantation of cardiac devices. Therefore, new studies on known and further predictive parameters and/or indices are recommended, from both the clinical and forensic points of view, and also to protect the operator from charges of professional liability.

Although the use of ICDs shows low complication rates, this should not be underestimated from either a clinical or a legal point of view. Cardiac perforation during the introduction of electrocatheters is a very rare, but possible, event that can result in concerns as to the possible responsibility of the operator. Therefore, new studies on known and further predictive parameters and/or indices are recommended to avoid the selection of patients with increased risk of complications during these procedures and to protect the operator from charges of professional liability.