1Department of Gastroenterology and Hepatology, University Clinic Hospital of Kosova

Crohn’s disease is a chronic inflammatory bowel disease with an unknown etiology that may affect any segment of the digestive tract, from the oropharyngeal to the perianal region. It is characterized by a discontinuous and transmural pattern of inflammation that involves all tissue layers of the digestive tract. Common mucocutaneous manifestations of Crohn’s disease involve erythema nodosum and erythema multiforme. Pemphigus vulgaris is a chronic autoimmune mucocutaneous disease, caused by an autoimmune mechanism in which antibodies against desmoglein 1 and desmoglein 3, disrupt the normal components of the keratinocyte cell membrane. It represents the most common and most serious type of pemphigus. It manifests, initially, with blisters and erosions on the oral mucosa, with subsequent lesions and intraepithelial vesicles on other mucous and cutaneous surfaces and eventually, entire body dissemination. We present a case of a patient with a decade-long history of Pemphigus Vulgaris, in whom Crohn’s disease was diagnosed 10 years later.

Pemphigus vulgaris (PV) represents a group of bullous autoimmune diseases characterized by the presence of IgG against keratinocytes in the epidermis. These autoantibodies are specifically directed against desmoglein 1 and desmoglein 3, which belong to the supergene family group of cadherins [1]. Pemphigus vulgaris may be associated with other autoimmune diseases, including systemic lupus erythematosus and myasthenia gravis. Moreover, it can present as an accompanying feature of certain malignancies or lymphoproliferative conditions [2]. PV is a rare condition, affecting approximately 0.1-0.5 cases/100.000 people a year, beginning in the fifth or sixth decade of life and occurs in individuals with strong genetic disposition (HLA-DR4, HLA-DR14) [1-4]. The morbidity and mortality of PV is closely related to the extent of the disease, dose of treatment needed to control the lesions, the patient’s age, antibody titer and presence of other comorbidities [2, 5].

Crohn’s disease (CD) is a chronic inflammatory disease which involves the inflammation segments of the digestive tract. The affected segments are separated by normal segments, giving rise to the term “skip lesions” The precise etiology of the disease remains unknown, however a combination of factors such as interactions of autoimmune and environmental factors, in genetically susceptible individuals play an important role in the etiology of disease. More common than PV, CD affects 3.2 per 1.000 people in Europe and North America alone [6]. The inflammation in CD is transmural with periods of exacerbation and remission. In literature, CD and PV have rarely been associated together.

Herein, we present a case of pemphigus vulgaris (PV) which precedes by 10 years the manifestation of Crohn’s disease (CD).

A 26- year- old male is referred to the Gastroenterology and Hepatology Department, with complaints of abdominal pain, vomiting and frequent bouts of watery diarrhea with no presence of mucus or blood (occurring up to 20 times per day), epigastric pain and tiredness. The patient reported that these complaints had been occurring for the past three months, but had increased in intensity the last 8-10 days, with frequent episodes of non-bloody diarrhea (5-6 times a day). He reported moderate pain in the epigastrium after meals. He was unsuccessfully treated in an ambulatory setting with analgesics and proton pump inhibitors. He was admitted to the Gastroenterology and Hepatology Department of University Clinic Center of Kosovo for further evaluation and treatment. His previous medical history was significant for a diagnosis of Pemphigus Vulgaris 10 years prior, for which he was on treatment with Azathioprine 50 mg twice daily, Prednisone 60 mg daily and Esomeprazole 40 mg daily. His family history was unremarkable.

On physical examination a few red striae along his abdomen were notable. His visible mucosae were normal, slightly pale. Multiple and severe erosions were present in his oral mucosa. Regional lymph nodes were not palpable. His pulse rate was 85/min, blood pressure 100/60 mmHg. Palpation of the abdomen revealed epigastric tenderness. 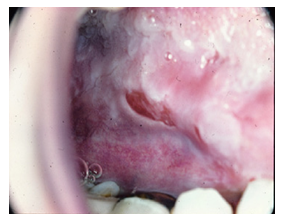 Histopathologic examination and immune-histochemical staining from the biopsy of oral mucosal mucosa revealed chronic inflammatory infiltrate that confirmed the diagnosis of pemphigus vulgaris. Peripheral blood smear revealed microcytic and normochromic red blood cells, leukocytes, and granulocytes with toxic granulations with a shift to the left. Microscopic evaluation of feces was normal, and culture of feces detected no pathological organisms. FOBT was negative.

Did not reveal any abnormal findings.

Revealed thickened walls (5 mm) involving the ileum, caecum and ascending colon and inflammatory changes around the colon. Lymph nodes in the mesenteric area were slightly enlarged with a maximal diameter of 7-8 mm. The appendix had a retro-caecal position, with no inflammatory changes. 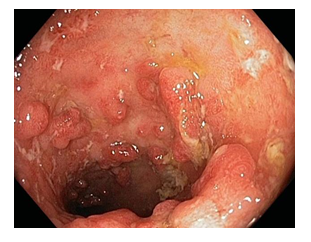 Revealed hyperemia and superficial erosion of the mucosa of the rectum, sigmoid colon, and descending colon. Starting from the transverse colon, scattered aphthous ulcers and a fragile mucosa which bled on endoscopic maneuvering, were visible. In the ascending colon, near the ileocecal valve, a few polypoid formations with highly hyperemic mucosa were noticed. A tissue sample was collected for further investigation. Furthermore, a few small pseudo polyps were also noted. The endoscopic findings suggested a diagnosis of Cron’s disease with pseudo polyposis in the ascending colon.

of the colon revealed clear inflammatory changes diagnostic of Crohn’s disease. The patient subsequently improved with a readjustment of his existing therapy and addition to 5-ASA 500 mg thrice daily. Recommendations to avoid gluten and continue warfarin treatment according to his INR, were given. In a subsequent checkup, 4 months later, the patient had no complaints, and his laboratory findings were all within normal limits.

Pemphigus vulgaris (PV) results from an abnormal autoimmune response, that leads to the formation of autoantibodies against normal components of the keratinocyte cell membrane: desmoglein 1 and desmoglein 3 (type of cadherin). These autoantibodies (anti-desmoglein antibodies) belong to IgG1 and IgG4 subclasses, with IgG being present during the active phase of disease and absent during the periods of remission. The development of these antibodies and their action in the keratinocyte cell membrane leads to the loss of adherence between cells and the separation of the epithelial layer, a process known as acantholysis. Acantholysis culminates with the formation of vesicles in the skin or mucosa [1, 4]. The presence of autoantibodies desmoglein 3 is related to the initial stages of PV and manifests mainly in the mucosa. However, the concomitant presence of both autoantibodies against desmoglein 1 and desmoglein 3 is a harbinger of a much severe course of PV with mucocutaneous manifestations [1, 4]. Although PV is considered an idiopathic disease, several medications and environmental factors have been documented to precipitate the onset of the disease. Penicillamine and ACE inhibitors are among the most common culprits [1, 4, 7-9]. The diagnosis of PV is based on 3 independent criteria: clinical evidence of PV, histologic evidence of PV and immunologic testing. [6, 8]. Suspicion of PV should arise in cases of chronic gingivostomatitis, multiple and persistent erosions in the oral mucosa or erosive gingivitis [1, 5].

Crohn’s disease (CD) is considered to be a heterogenous inflammatory disorder with a multifactorial etiology, with both genetic and environmental components contributing to its pathogenesis [10]. Superficial ulcerations above a Peyer’s patch (aphthoid ulcers) are indicative of active disease [11]. Chronic inflammation with neutrophilic infiltrates and non-caseating granulomas, is present in the mucosa, submucosa and may often extend to the serosa layer [11]. Several genes have been implicated in the pathogenesis of CD, including NOD2, IL23R and ATG16L1. The NOD2/CARD15 gene has been associated with familial CD, earlier age of onset and higher severity [10]. IL23R gene is thought to play a role in the differentiation of Th-17 lymphocytes, leading to a dysregulation in the cytokine production [10]. Indeed, several studies have suggested that CD may arise from an increased activity of Th-1 cells in the intestinal mucosa and an overproduction of pro-inflammatory cytokines including IL-12, IL-15, and IL-18 [11]. IFN-γ and TNF-α are also found in increased levels in the intestinal mucosa [11]. Environmental factors that instigate the intestinal inflammation include smoking, dietary habits lacking fibers, raw fruits, and vegetables, as well as lifestyle factors [10]. Sleeping disturbances are common during the active phase, and in turn contribute to the ongoing inflammation [10]. Continuous stressors, anxiety and depression all have a negative impact in the prognosis of CD, whereas physical activity is associated with a lower probability of developing CD [10].

We did not manage to find an association between CD and PV in literature. The most common cutaneous manifestation of inflammatory bowel disease (IBD) is erythema nodosum with a low incidence of 4-6%. The incidence of pyoderma gangrenosum in IBD is quite low (0.6-2.2%). Another rare manifestation is pyostomatitis vegetans, with the appearance of pustules and ulcerations in oral buccal mucosa and lips. Cutaneous polyarteritis nodosa is extremely rare in cases with IBD and only less than 20 cases have been reported.

The presence of multiple autoimmune conditions has long been reported. In patients with PV other autoimmune comorbidities must be investigated. In earlier studies, concomitant autoimmune diseases were present in 27.8% of cases, with diabetes mellitus type 1 being the most common.

In conclusion, autoimmunity is the system of immune responses of an organism against its own cells and tissues. In patients with PV other autoimmune comorbidities are reported such as myasthenia graves, lupus erythematous, rheumatoid arthritis, pernicious anemia, and ulcerative colitis. Association of Crohn’s disease with PV is rarely seen and physicians should be aware of this rare comorbidity and promptly diagnose it.