We present the case of a 63-year-old woman with obscure gastrointestinal bleeding (OGIB) due to jejunal cavernous hemangioma diagnosed by video capsule endoscopy (VCE), contrast enhanced computed tomography (CECT) and CT angiography, who was successfully treated with surgical resection. Small bowel cavernous hemangioma is a rare cause of OGIB, most commonly presenting as an iron-deficiency anemia. Two decades ago, the preoperative diagnosis was quite difficult. Currently, the use of VCE and device assisted enteroscopy (DAE) allow detection of the lesion. Biopsy is not recommended due to the risks of uncontrolled bleeding. The use of CECT and CT angiography may be useful for demonstrate the vascular nature of the lesion, and define localization, number and extension of the lesion preoperatively in order to improve surgical results as was observed in our patient. Surgery is the most frequent treatment, notwithstanding, endoscopic resection of lesions has been recently reported. However, the experience is small and there are serious limitations of this technique.

Hemangioma accounts for only 0.5% of all gastrointestinal neoplasms. They represent 5-10% of all benign small bowel lesions [1]. They are more frequently placed in the jejunum presenting as a solitary or multiple lesion. The main symptoms include bleeding, abdominal pain, obstruction, intussusception, or rarely, perforation. Chronic iron-deficiency anemia is the most frequent manifestation although severe acute bleeding has been described [2-5]. Hemangioma originates in the submucosal vessels and may extend transmurally to the muscular layer or the serosa. [6] They are classified as cavernous, capillary or mixed types based on the diameter of the affected vessels [6]. The preoperative diagnosis was not possible for long time [7]. Currently, modern endoscopic methods such as video capsule endoscopy (VCE) and device-assisted enteroscopy (DAE) allow the detection of these lesions [8, 9]. VCE is considered as the first line procedure for assessing small bowel [10]. DAE can be used for hemostasis in cases of active bleeding. Besides, imaging procedures such as contrast enhanced computed tomography (CECT) and CT angiography can be useful for determining vascular nature and the number and location of lesions in order to determine the most appropriate therapy [11, 12].

We present here a patient with a cavernous hemangioma manifested as chronic iron-deficiency anemia, detected by VCE, CECT and CT angiography who was successfully treated with surgical resection.

A 63-year-old woman was attended in our gastroenterology out-patient unit due to an eleven-year history of anemic syndrome. She was chronically treated with iron-oral supplementations. During the previous year, she had exacerbation of the anemic symptoms requiring several hospital admissions and showing decreased serum hemoglobin levels (5 to 6 g/dL) treated with blood transfusions. During this period, she underwent repeatedly esophagogastroduodenoscopy and colonoscopy without finding a source of bleeding.

An evaluation of her small bowel was decided through VCE which detected a solitary red polypoid lesion with eroded surface in the proximal jejunum without active bleeding (Figure 1). 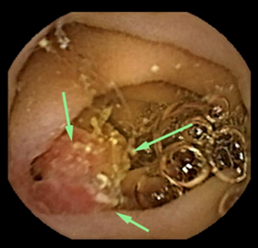 A CECT was performed that demonstrated a unique contrast-enhancing lesion on jejunum. The angiography CT tridimensional reconstruction revealed an aberrant vessel originating from an arterial branch of the superior mesenteric artery which ended in a dilated vascular structure in the mucosa of jejunum. Active bleeding was not observed (Figure 2).

With the diagnosis of a vascular lesion the patient was sent for surgical resection. An open laparotomy was performed during which no serosal vascular lesion or palpable nodule was detected. An intraoperative enteroscopy demonstrated a 22-mm diameter polypoid lesion with eroded mucosa surface at 50 cm from the Treitz ligament (Figure 3). A 20 cm-segmental resection of the proximal jejunum and end-to-end anastomosis was performed. 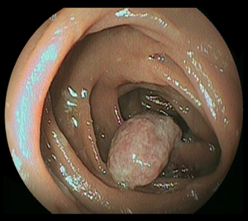 Microscopic examination of the lesion showed vascular proliferation within the submucosa with large, dilated, blood-filled vessels lined by flattened endothelia and separated by connective tissue suggestive of cavernous hemangioma (Figure 4).

Figure 4: Pathologic features of the resected lesion. (A) Polipoid lesion involving submucosa with presence of a central vessel; (B) Microscopic examination showed proliferation of large dilated vascular channels within the submucosa separated by connective tissue stroma.

The patient had good postoperative evolution and was discharged from the hospital 7 days afterwards with normal hemoglobin serum levels. She has remained free of anemia after two years of follow-up since surgery.

The cavernous is the most frequent histologic type of hemangioma. It is more frequently observed in males from 9 to 74 years and the size of the lesions may vary from 0.8 cm to 50 cm in diameter [13]. The preoperative diagnosis was rare before 2000. Currently, with the use of VCE and DAE the preoperative identification has significatively increased [7, 14]. They usually present as red or blueish raspberry-like sessile or polypoid lesions, however the endoscopic recognition may be difficult in some lesions which do not have the typical appearance, as was observed in our patient [9].

The determination of the vascular nature is important in order to define management. Biopsy is not recommended due to risks of severe bleeding. Therefore, the use of complementary imaging procedures may be useful [15]. In our patient we decided to perform a CECT and CT angiography in order to confirm the vascular nature of the polyp and to determine localization and number of lesions. CECT may reveal hemangioma as thickening of the small bowel with heterogenous and persistent enhancement of the lesion [14]. The distinctive CECT radiographic feature in hemangioma is strengthening of the lesion during the arterial phase as was observed in our case [11, 12]. On the other hand, CT angiography is a quick, imaging modality with excellent spatial and temporal resolution. Modern CT scanners can provide sub-millimeter isotropic three-dimensional datasets within a single breath-hold during the first past of intravenous contrast medium [15]. CT angiography has also a high diagnostic accuracy in detecting and localizing the source of gastrointestinal bleeding, with a sensitivity of approximately 85% [16], and it can detect bleeding rates of as little as 0.3 ml/min [17]. These imaging procedures are highly recommended particularly in patients in whom, a surgical approach is considered [14].

In only few of the published reported cases of small bowel hemangioma, CECT or CT angiography as complementary diagnostic procedures have been used [13, 18] We think that they should be used more frequently, particularly in patients in whom surgical treatment is considered. Surgical resection is the most frequent treatment, although endoscopic resection with snare polypectomy after submucosal saline solution injection has been recently described [18]. In a recent systematic review of 15 published cases of uncomplicated cavernous hemangioma diagnosed with VCE, DAE and CECT, from 2000 to 2018, 14 patients were treated surgically (with laparoscopy: 5 cases and laparotomy: 9 cases) and only 1 was treated endoscopically [13]. In this case report of a 19-year old patient, 4 sessile vascular lesions (0.8 to 14 mm in diameter), were successfully resected by snare polypectomy through DAE [19]. Although endoscopic treatment seems to be an attractive modality, there is still a very small experience in this technique. Besides, it may increase the risks of uncontrolled bleeding and gut perforation in transmural hemangiomas. In addition, large, numerous and widely disseminated lesions are beyond the scope of this technique [14, 18, 20]. In our case, we decided to perform small-bowel resection of the affected segment.

In conclusion, the cavernous hemangioma is a rare cause of small bowel bleeding. The use of VCE is a useful tool for detection of the lesion. The vascular nature of the lesion may be difficult in many cases. DAE has some limitations due to non-availability or the risks of bleeding due to biopsy. CETC and CT angiography can be considered as a complementary imaging study in order to confirm vascular nature and determine number and location of lesions especially when surgical approach is considered. More experience with endoscopic resection of lesions is necessary in order to define its precise role in the treatment of selected cases.

Informed patient consent was obtained for publication of this case.