Purpose: Myocardial infarct mediates an inflammatory response whose intensity limits the recovery of the damaged tissue and its function. In the present work, we evaluate the efficacy of immunomodulatory hIL10 gene hydrofection on acute myocardial infarct in pig.

Methods: Pigs recently infarcted by right coronary artery block were injected with 50 ml saline solution containing the naked gene at 2 or 7 ml/s through coronary sinus. Blood samples were collected from coronary sinus before gene injection, 2 and 72 hours later for protein quantification. Heart tissue samples from normal and infarcted tissue were collected 72 hours post-transfection to evaluate the efficiency of gene delivery and decoding

Myocardial infarction is one of the most common causes of death [1] in the adult population from industrialized countries [2, 3]. In the cases in which the ischemic episode does not provoke patient’s death, heart does not result undamaged and an intense inflammatory response is triggered [4]. This is essential for cardiac repair, but is also implicated in the pathogenesis of post-infarction remodeling and heart failure. Inflammatory cells infiltrate, phagocyte the necrotic tissues and secrete a variety of inflammatory cytokines [5]. The damage caused includes heart tissue necrosis and fibrosis due to the pro-inflammatory environment created [6]. Individuals with an overactive and prolonged post-infarction inflammatory response might exhibit left ventricular dilatation and systolic dysfunction. These effects deteriorate the cardiac function and facilitate the occurrence of heart failure and recurrent ischemic episodes [7]. There is evidence that pro-inflammatory cytokines are involved in the remodeling process [8] and, thus, immunomodulatory cytokines limiting the local inflammation post-infarct could preserve the healthy tissue and improve patient’s prognosis. In this sense, Interleukin 10 (IL-10) has demonstrated to inhibit the production of tumor necrosis factor-α and to protect the ischemic and reperfused myocardium through the suppression of neutrophil recruitment [9]. We hypothesize that transferring a gene construct encoding the immunomodulatory interleukin-10 could mediate the local overexpression of IL10 protein, inhibit the expression of TNFα and improve infarct injury evolution. Because of IL10 pleiotropic activity [10], the local and transient expression of the protein could be advantageous to avoid systemic adverse effects.

Non-viral gene therapy with IL10 gene would be an appropriate strategy since the exogenous gene does not integrate into the host genome and the immunosuppressive response will act temporarily. The perfect vector supplying safety, gene stability, easy formulation, systemic administration, target selectivity, host cell arrival, and efficient and maintained

The expression has not been designed yet. For this reason, gene delivery procedures have to be optimized to transfer the gene in a safe and efficient manner [3]. However, transfer of naked nucleic acids could offer positive benefit/risk balance. In this respect, different strategies for naked DNA delivery have been evaluated in liver [11, 12] and heart, the most commonly used being: a) direct intramyocardial injection, which facilitates gene arriving in the target cell by avoiding the physical tissue barriers at the expense of being an invasive procedure that could alter the normal function of myocardium [13, 14]; b) pericardial perfusion, which can be performed with a minimally invasive procedure in large animals but only achieves gene expression in superficial layers of myocardium [15]; c) coronary artery perfusion, which is a minimally invasive and safe procedure, but inefficient [16] due to the rapid arterial blood flow; d) coronary sinus retrograde injection, which has demonstrated [17,18] to be the most promising strategy when considering safety, clinical applicability and effectiveness. In our previous works, coronary sinus retrograde injection of green fluorescent protein (eGFP) gene mediated eGFP protein expression in heart tissue throughout the whole organ, as evidenced by immunohistochemistry and fluorescence [19] microscopy. However, the hydrofection of human genes with clinical interest in cardiac pathologies as Interleukin 10 in myocardial infarction in pig heart has not been studied so far.

In the present study, we have analyzed the efficiency of the coronary sinus retrograde injection of human interleukin-10 gene in recently infarcted pigs, evaluating gene translation within the heart tissue (normal and infarcted) and its release to coronary sinus blood. The data have been expressed considering a normalized cell, which was classically described by Alberts et al. [20] as a typical mammalian hepatocyte with a defined content of total protein (500 pg). The index of translation indicates the absolute copy number of human Interleukin 10 proteins referred to a normalized cell. The potential immunomodulatory effect of IL10 protein on heart tissue injury after myocardial infarction was also evaluated by histology.

The coronary sinus was sealed by inflating the Swan-Ganz balloon, and closure was confirmed by injecting contrast through the same catheter. Then, 50 ml of p2F-hIL-10 plasmid (20 µg/ml) solution was retrovenously injected through the Swan-Ganz catheter at 2 ml/s (n=1 for safety control) or 7 ml/s (n=5). Control pigs (n=4), with induced infarction, but without gene transfer were also employed. Five minutes after injection, the balloon was deflated and the catheter removed. The animals were sacrificed 72 hours after transfection and tissue samples were taken from 7 different areas for molecular analyses: right atrium, left atrium, anterior right ventricle, anterior left ventricle, posterior right ventricle, posterior left ventricle and infarct. Blood samples were taken from coronary sinus 72 hours post-transfection. Results showed that is possible to achieve more than 100 molecules per cell of human IL10 protein (Figure 1), suggesting that 7 ml/s injection of hIL10 gene offers efficient gene decoding. 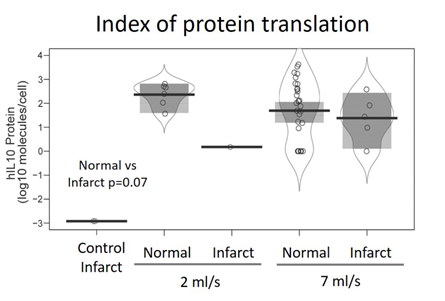 Figure 1: Index of tissue protein translation. Median (black line) and standard deviation (grey square) values of human IL10 protein per cell in normal and infarcted tissue from control and treated (at 2 and 7 ml/s) are represented. The index of translation in each sample is shown (empty dots), width of pirate plot defining the distribution of population.

Protein was also determined in coronary sinus plasma 72 hours post-transfection. The average plasma levels obtained achieved around 50 pg/ml and up to 180 pg/ml in one case. It has been described that 124 pg/ml [10]  of IL10 could reduce by half the concentration of TNFα, which is one of the first mediators of inflammatory responses. IL10 can also limit the cell-mediated acute inflammatory responses [21]. Tissue from hIL10-treated pigs is partially protected against this inflammatory response, as demonstrated by less severe edema and cell infiltration (Figure 2). 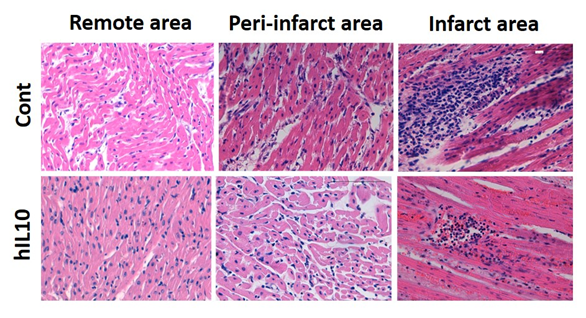 Table 1: Histological study of heart. Heart tissue samples from infarct, peri-infarct and remote areas were sliced and stained with hematoxylin-eosin.

These results suggest that the anti-inflammatory cytokine IL10 can modulate the immune response that takes place after myocardial infarct, improving the cardiac repair process. Retrovenous hydrofection of IL10 gene mediates efficient protein expression for at least 72 hours, which reduces the post-infarct inflammatory response regarding tissue infiltration of inflammatory cells and edema. This is achieved by a procedure that could be transferred to human clinical setting in heart infarct, increasing its potential interest.

We would like to thank David Hervás and Victoria Fornés, from Biostatistics Unit at IIS La Fe (Valencia, Spain) and to SCSIE of Universitat de València for their valuable help. This work has been supported by VLC-Bioclinic program of UV and INCLIVA (reference 09_TerGenlnf-ALIÑO-MAINAR-2014-UV) and by Instituto de Salud Carlos III and FEDER (PI17/01836, PIE15/00013, CB16/11/00486).