Background: Disc herniation of the thoracic spine is a rare lesion that is believed to occur in 1 in 1000 to 1 in 1,000,000 patients each year. Endoscopic-assisted thoracic disc microdiscectomy is a safe and effective surgical removal technique for intervertebral herniated thoracic discs.

Case Presentation: A 48-year-old female was presented with progressive weakness in both lower limbs for three months, incapacity to void urine for 2 weeks. She had back pain and neck pain for 5 years. Clinically, she was diagnosed with paraplegia at stage D6/7 as a case of dorsal disc prolapse. After doing unilateral transpedicular microscopic discectomy she recovered over 4 weeks and her muscle strength was 4/5 in the lower limbs, and she was able to walk.

Compared to lumbar and cervical disc pathologies, thoracic disc bulgings/herniations are fairly rare. It is estimated that only 0.25 to 1% of all disc herniations occur in the thoracic region [1]. Although rare, accurate diagnosis of thoracic disease, especially thoracic disc herniation, can be difficult because it can resemble many medical conditions and is often misdiagnosed as cardiac, abdominal, gastrointestinal, neoplastic, or demyelinatal [2]. Dorsalgia of progressive onset that follows any degree of myelopathy or sensory defects in thoracic disc herniation and can reach debilitating levels [3]. The surgical indication is determined when the patient has functional symptoms that do not lead to medical care and/or when neurological symptoms occur or worsen. The key clinical symptom is pain (intercostal neuralgia, back pain) that is present in 92% of cases. In the Quint report, 60% of 168 patients had neurological deficits [4]. It may be either sensory or motor disorders with a lesional syndrome (intercostal or abdominal radicular pain) or with a sub-lesional neurological condition in the form of sluggish medullary compression. A few rare cases of temporary or permanent paraplegia caused by central hernia occlusion of the anterior spinal artery have been reported [5]. Transpedicular approach can be an efficient and safe form of surgical decompression in patients carefully chosen. There are drawbacks to the unilateral transpedicular method for thoracic disc herniation. Disc at midline or midline crossing is an obstacle to this practice. Endoscopic-assisted microdiscectomy or pure endoscopic is also a choice for visualizing and extracting from the opposite side the disc/calcified material under direct vision. The goal is to determine the protection of endoscopic assisted thoracic disc microdiscectomy in a paraplegic patient. In January 2019, this retrospective analysis of one patient was carried out at a private hospital (Comfort Hospital), Dhaka, Bangladesh.

A 48 years female presented with gradual weakness in both lower limbs for three months with unable to void urine for 2 weeks, the patient had back pain and neck pain for 5 years. She was treated by a physician and initially diagnosed with transverse myelitis. Her CSF study revealed normal findings. As there was no improvement of symptoms they wanted a consultation from neurological aspects. Then she was examined carefully and found a sensory level of D8 and joint position sense was absent on both lower limbs. Motor power was grade 3 in lower limbs. There were increased knee and ankle jerks with patellar clonus and bilateral extensor plantar response. She was catheterized and there was perianal numbness (symmetrical). Her upper limb examination revealed no abnormality. She had no history of trauma, infection, or tumor surgery. MRI Dorsal Spine revealed dorsal 6/7 level disc herniation with spinal cord compression. (Figure 1A and 1C) CT dorsal spine revealed no abnormalities/calcification. (Figure 1B). Clinically, she was diagnosed as a case of dorsal disc prolapse at D6/7 level with paraplegia. 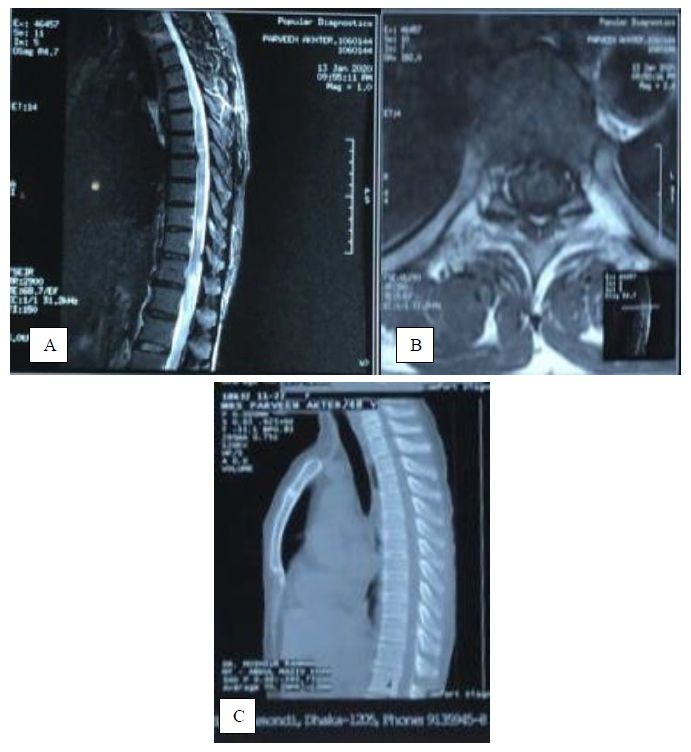 A 3 cm paramedian linear incision was made about 3 cm lateral to the midline on left D6/7 level under C-arm. Skin, subcutaneous tissue, deep fascia, were cut, paraspinal muscles were detached and retracted by Caspar retractor. The high-speed drill was used to make a hole inside the pedicle of the dorsal 7 vertebral body. It was then enlarged and with the help of micro curette and micro rontgers and endplate were palpated and breached under operating neuro microscope and further enlargement of the hole was made; through the 5 mm hole disc was then removed and posterior longitudinal ligament was cut through karrison punch. Under the direct microscopic vision, the disc was then removed gradually and the dura mater was seen along with spinal cord pulsation. The 30-degree endoscope was used to check for disc under the thecal sac. The posterior longitudinal ligament was cut and discectomy crossing the midline which was confirmed by C-arm in antero-posterior view. CSF leak was checked by doing the Valsalva maneuver. A subcutaneous free fat graft was then taken to fill up the hole. Wound closed in layers keeping a closed drain in situ. The postoperative period was uneventful and the patient was static. Over 4 weeks she recovered and her muscle power was 4/5 in lower limbs and was able to walk. She was able to void urine without any difficulty and PVR (post-void residual) on Ultrasonography on 4 weeks follow up was 35 ml.

Several surgical procedures and various methods have been developed for treating thoracic disc herniation. It has been surgically treated with thoracotomy, posterolateral extracavitary, costotransversectomy, and transpedicular approaches [6-11]. These surgical approaches have produced similar surgical results, preventing severe damage to the spinal cord that has typically occurred with a laminectomy approach [12]. Unilateral transpedicular microscopic discectomy provides access to a minimally invasive posterolateral muscle-splitting procedure that does not damage the contents of the thoracic cavity. This procedure is effective in the thoracic spine, with shorter hospital stay, less postoperative discomfort, reduced blood loss, and shorter recovery times. The thoracic spine with appropriate patient range and correct surgical procedure should predict these same advantages.

Microendoscopic thoracic discectomy was reported by Perez-Cruet and colleagues in 2004 [15]. Their study presented findings in 7 patients with 9 thoracic discs extracted using a 30 microendoscope. An incision was made from the midline 3 to 4 cm, and the tubular dilators were centered at the level of the herniated disc on the superior aspect of the caudal transverse process. Passed via the microendoscope and attached to the final tubular retractor. In their 2006 study, Eichholz and colleagues found this technique to have fewer incisions and less tissue disturbance than the conventional lateral extracavitary method for thoracic disc herniation [16]. Khoo and colleagues identified 13 patients with minimally invasive lateral extracavitary microscopically assisted approaches [17].

Thoracic discectomy usually has a complication rate of 20% to 30%. Some authors found that because of the lower complication rate for thoracic discectomy, where there is a choice to choose between an anterior or posterior approach, the posterior approach is preferred. A meta-analysis of 545 patients undergoing thoracic discectomy found a complication rate of 24%, including lung complications of 6% and intercostal neuralgia of 6% [18]. Some complications were recorded by McAfee et al. in video-assisted thoracic surgery [19]. Such was intercostal neuralgia (8%) and atelectasis (6%). Mayer has described the thoracic disc herniation approach to mini-thoracotomy. These techniques were then improved by using a mini-thoracotomy supported microscope, which was recorded in the surgical microscope [20]. A report observed thoracotomy-related risks with 30-day mortality range from 3 to 30% in patients with metastases and this has contributed to the development of alternative posterolateral techniques [21-28]. Several authors have identified strategies for spinal metastasis resection not involving a transcavitary approach [29-35].

Costotransversectomy was first identified in 1894 by Menard for the drainage of tuberculous abscesses in patients with Pott paraplegia [36]. Various modifications of this procedure for removing anterior thoracic have been created. While patients diagnosed with costotransversectomy had a substantially higher rate of comorbidities, its perioperative complications were very similar to those in which thoracolumbar approaches were performed.

In the late 1960s, the Transthoracic method improved [10]. Thoracotomy morbidities contributed to the development of thoracoscopic techniques [37]. Surgeons have resisted anterior and/or lateral thoracotomic approaches due to a need for a multidisciplinary approach. Subsequent treatments were more widely used for symptomatic disc herniations of the spine thoracic segment [38].

The benefit of the surgical microscope was a direct visualization of thoracic disc herniation, and a high-speed burr was used for decompression of the spinal canal to visualize the spinal cord 5-6 mm long. The natural history of thoracic disc herniations remains uncertain. The minimally invasive thoracic microdiscectomy technique is a viable option that avoids substantial muscle and ligament dissection, minimizes unnecessary retraction of critical anatomical structures, decreases bone resection, minimizes blood loss, avoids iatrogenic instability and removes the use of fusion or instrumentation. To order to better grasp the reasons behind the creation and use of this technique, one needs to have an understanding of the history of thoracic disc herniation surgical treatment. We used this secure technique to enhance three-dimensional surgical visualization, promote clinical teaching for assistant surgeons, and reduce the learning curve. For the operator who is not familiar with endoscopic spinal surgery, the experience is important to obtain the requisite hand-to-eye coordination.

Symptomatic thoracic disc herniation is rare and can present very differently, with the most feared neurological deficits. Through expanded usage and advancement of minimally invasive procedures, spine surgeons can easily remove offending thoracic disc herniations with less morbidity than conventional procedures. Surgery is complicated and full of risks for that. Adoption of minimally invasive thoracic disc resection procedures will lead to decreased operating time, lower blood loss, and faster recovery of patients. We believe that further advances in instruments and developments in endoscopically controlled techniques are likely to increase this procedure's effectiveness, safety, and popularity.

There is no potential conflict of interest relevant to this case report.

No funding was provided for this case report.

This study obtained patient consent directly from the patient.

The author's contributions include manuscript preparation and editing. The manuscript has been prepared and approved by all the authors to be submitted and published.

The principal author is grateful to Dr. Paulo Pereira for his kind help to prepare the case report and also like to express his gratitude to Dr. Luis Rafael for his inspiration and motivation.