Generalized pustular psoriasis (GPP) is the most severe form of psoriasis. It is characterized by high fever, general condition decline and sudden and widespread eruption of sterile pustules [1]. Historically, GPP has been described in patients with psoriasis vulgaris (PV) undergoing aggravating factors such as pregnancy, the use and discontinuation of systemic corticosteroids [1, 2]. Recent studies have shown that genetic alterations may be implicated in the occurrence of GPP, such as mutations in the CARD14 and IL36RN genes [2-4]. The IL36RN gene is primarily expressed on the skin and encodes the IL-36 antagonist (IL-36Ra) which neutralizes the inflammatory effect IL-36 interleukin by binding to its receptor (IL-1RL2) [2, 3, 5]. The IL-36 are absent in normal skin, when present they activate several proinflammatory pathways, such as the NF-kappaB pathway and the activated mitogen protein kinase pathway [4]. Both homozygous and heterozygous compound mutations were detected in the IL36RN gene [3]. Thus, patients with the mutation IL-36Ra present uncontrolled activation of the inflammatory pathway of interleukin-36 and clinically manifest generalized pustular eruption, fever and other systemic findings such as asthenia and increased erythrocyte sedimentation rate, this genetic disorder has been called deficiency of the interleukin-36 receptor antagonist (DITRA) [2-5]. Ditra has been described in familial and sporadic cases of GPP, in patients with palmar plantar pustular psoriasis, with Hallopeau continuous acrodermatitis, and in cases of acute generalized exanthematic pustulosis [3, 6,7]. Information on the best treatment for DITRA is still scarce and is based on reports and case series using leukapheresis [8] interleukin-1 inhibitor [9] and interleukin-17 inhibitor [10]. The clinical manifestation of patients with DITRA is severe and potentially fatal, both because this group responds poorly to conventional psoriasis treatments such as methotrexate and cyclosporine, and also because they may have complications of erythrodermic and pro-inflammatory conditions such as sepsis. We report the first Brazilian patient with DITRA and highlight the deep venous thrombosis as a possible complication of this disease that was not describe before.  2. Case Report

A 23-year-old Brazilian female was admitted to the hospital with a history of palmar-plantar pustular psoriasis that evolved, after intravenous corticosteroid administration, with erythroderma pustulosa, fever and asthenia (Figure 1). The patient had no family history of psoriasis, is the only daughter of non-consanguine parents and was born in the state of São Paulo – Brazil. During the hospitalization, at physical examination, widespread small pustules which coalesce forming large plaques, erythema and peeling envolving 85% of the skin, geographic tongue, the body temperature was 38,8 C and the heart rate was 148 bpm. At admission, the blood tests revealed an increase in the white blood cell count and in the C-reactive protein level and she was diagnosed with GPP and sepsis. Empirical antibiotics therapy was started, but after extensive investigation, no infection was found and antibiotics were stopped at day seven. 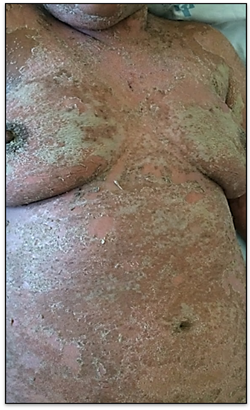 Figure 1: Clinical presentation of patient with pustular psoriasis and DITRA. Patient with generalized pustules with a tendency to clump together into plaques with erythematous background forming lakes of pus and affecting the abdomen and anterior chest.

The patient still presented difficulty in the clinical control of the fever and the pustulosis even with the use of cyclosporin, acitretin and methotrexate. In view of the peculiarity of the clinical state and the remarkable systemic symptoms the possibility of DITRA was raised. Two milliliters of peripheral blood were collected for IL36RN mutation screening and the Sanger sequencing showed mutation c.338C>T (p.Ser113Leu) in homozygous in exon 6 of IL-36RN gene (Figure 2). 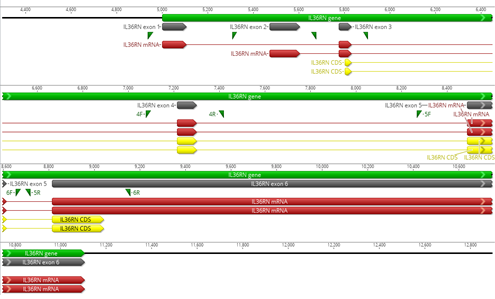 Figure 2: Molecular Structure of IL36RN Gene. Molecular structure of the IL36RN gene, exons are gray, introns are located between exons, coding region is yellow, mRNA is red throughout the gene and foward and reverse primers are green.

The patient treatment was improved with methotrexate 25 mg per week, acitretin 20 mg per day, prednisone 50 mg per day and subcutaneous adalimumab 40 mg every fifteen days. The symptoms gradually improved and the patient was discharged after being two months at the hospital. However, two days after, the patient was admitted again with pain, erythema and edema from right lower limb to femoral joint, symptoms of thrombosis. Doppler ultrasonography was performed and showed non-compressible echogenic material filling the vessel and no flow in the external iliac vein, common femoral vein and saphenous vein. The patients had deep venous thrombosis even though prophylactic anticoagulation was given with enoxaparin 40mg per day subcutaneously during the previous hospitalization. The patient was evaluated together with hematology, prescribed rivaroxaban 20 mg once a day and an investigation for thrombophilia was carried out. The patient denied personal and familial history of previous thrombosis, had two children with no obstetric event, was not a smoker, an alcoholic or an obese. The investigations of factor VIII activity, prothrombin and antithrombin activity, protein C and protein S activity showed no alterations. After 30 days of the thrombotic event, lupus anticoagulant, anticardiolipin and antibeta-2-glycoprotein 1 were tested, which were negative. Thus, thrombosis was considered a consequence of the reduction of movement caused by hospitalization, exposure to drugs that may have pro-thrombotic action, such as corticosteroid, in association with pro-inflammatory status by DITRA activity. The rivaroxaban 20 mg was maintained for six months because of the extension of the lesion, no other thrombotic events were observed, and the patient remains stable with the use of adalimumab 40 mg every fifteen days and under follow-up at a dermatology center.

GPP was first described in 1910 by Von Zumbusch, it is a rare disease, corresponds for less than 5% of psoriasis cases, and considered the most severe subtype of psoriasis [11]. It is characterized by systemic manifestations such as high fever, impairment of general condition, weight loss, muscle weakness, leukocytosis, hypocalcemia, and increased inflammatory evidence, such as erythrocyte sedimentation rate and C-reactive protein, associated with the sudden onset of sterile pustules with 2 and 3 mm over erythematous base that spread to the trunk and limbs [11, 12]. The patients with Ditra manifest clinically with GPP and had a mutation in the IL36RN gene that causes an uncontrolled activation of the IL36 inflammatory pathway.  To our knowledge, this is the first patient with DITRA reported in Brazil and we highlight the deep venous thrombosis as a possible complication of this proinflamattory condition. Recent studies have shown that immune cells and proinflammatory cytokines, such as the interleukins in the group of interleukin 1, induce inflammation in the endothelium of the veins, activate platelets and coagulation factors which constitute an important link for the occurrence of thrombosis in patients with inflammatory diseases [13]. Thus, at DITRA, the increase activation of IL-36 pathway may explain the occurrence of thrombosis in this patient, even after the use of prophylactic anticoagulant.

This case report showed that DITRA is a genetic disorder that still needs to be better studied so that we can understand all its possible manifestations and complications in the intentional to increase its detection in our dermatology community in Brazil and offer a better treatment for our patients.