Palbociclib is indicated in combination with an aromatase inhibitor for first line treatment of hormone receptor-positive, human epidermal growth factor receptor 2 (HER2)-negative advanced or metastatic breast cancer. We report a case of a 71-year-old patient with metastatic breast cancer who developed fatal diffuse parenchymal lung injury three months after the initiation of palbociclib plus letrozole. The patient presented with pulmonary embolism, which masked the progression of diffuse parenchymal lung injury. As dyspnea worsened, chest CT revealed a mixed pattern of severe interstitial and alveolar lung injury. Transbronchial lung biopsy was consistent with the subacute lung injury pattern. Treatment with high dose glucocorticoids did not result in clinical improvement and the patient succumbed to respiratory failure. It is important for clinicians to be aware that fatal interstitial pmeumonitis may occur in patients who are treated with palbociclib because early diagnosis may be vital.

Palbociclib is indicated for the treatment of HR positive, HER2 negative advanced or metastatic breast cancer in combination with letrozole as initial endocrine based therapy in postmenopausal women [3]. Adverse reactions of interstitial lung disease (ILD)/non-infectious pneumonitis have been identified during post-approval use of palbociclib, Because these reactions are reported voluntarily from a population of uncertain size, it is not always possible to reliably estimate their frequency or establish a causal relationship to drug exposure.

Two serious pulmonary adverse events were reported in clinical trials of other cyclin-dependent kinase 4 and 6 (CDK 4/6) inhibitors. One death due to pneumonitis occurred with abemaciclib plus anastrozole or letrozole in the MONARCH 3 study [4]. Another death due to acute respitratory distress syndrome occurred with ribociclib plus fulvestrant in the MONALEESA-3 trial [5]. To our knowledge, we report the first case of palbociclib-related diffuse parenchymal lung injury.

In January 2010, a 63-year-old women, presented with inflammatory carcinoma of breast ER/PR+‏, HER2-. Neoadjuvant chemotherapy with dose dense doxorubicin in combination with cyclophosphamide followed by paclitaxel was initiated. Lumpectomy plus sentinel lymph node biopsy were performed 6 months later. After the completion of adjuvant radiotherapy, adjuvant hormonal therapy with tamoxifen followed by exemestane were administrated for a total of 5 years until September 2015. Two years later, the patient was diagnosed with metastatic breast cancer following progressive diffuse bone pain. Palliative radiotherapy to the lumbar spine and pelvis was administrated and treatment with letrozole, palbociclib and zoledronic acid was initiated in April 2018.

In early June 2018, the patient reported her bone pain improved, the level of CA-15.3 decreased (from 205 to 76 units per milliliter) and PET-CT was consistent with partial response and without evidence of any lung pathology. Ten days later, the patient was admitted to an internal medicine ward due to shortness of breath and swelling of the left leg. Doppler ultrasound revealed an acute deep venous thrombosis of the left distal femoral vein, and rivaroxaban was started.

The patient was transferred to an intensive care unit due to respiratory failure. Treatment with wide spectrum antibiotics and high dose glucocorticoids did not result in clinical or radiological improvement and the patient succumbed three weeks later. 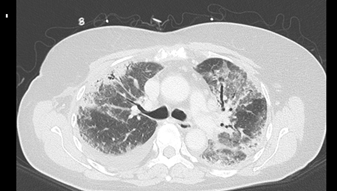 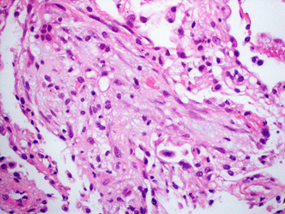 This patient presented with diffuse parenchymal lung disease three months after palbociclib, letrozole and zoledronic acid were initiated and proved efficacious on PET CT. Lung injury was confirmed on sequential CT imaging studies. No previous cases of letrozole or zoledronic acid related pneumonitis have been reported. Alternative causes for diffuse parenchymal lung disease such as infection, pulmonary infarction, or lymphangitic carcinomatosis was excluded in an extensive laboratory workup and in transbronchial biopsy. The exclusion of these multiple diagnoses suggests a causal relationship to drug exposure. The Naranjo nomogram for adverse drug reaction assessment score for this case is 6. To our knowledge, this is the first case of palbociclib-induced pneumonitis to be reported.

Our patient with advanced breast cancer, achieved a partial response with palbociclib plus letrozole, but concomitantly presented with venous thromboembolism and diffuse parenchymal lung disease. The thromboembolic event has masked the progression of lung toxicity, as patient' progressive dyspnea was attributed to pulmonary embolism. It is important for clinicians to be aware that fatal interstitial pmeumonitis may occur in patients who are treated with palbociclib because early diagnosis may be vital.