Hydranencephaly: A Cause of Increasing Head Size in A Nigerian Neonate

Hydranencephaly is a rare brain abnormality that is characterized by replacement of the cerebral hemispheres by cerebrospinal fluid. The incidence of hydranencephaly is estimated to be 0.5 per 1000 births. Various aetiologies have been proposed. These include bilateral occlusion of the internal carotid arteries and congenital infections like herpes simplex virus and Zika virus. Features of hydranencephaly include increasing head size, blindness , hypertelorism, seizures and excessive crying. Treatment is mainly supportive and children with hydranencephaly have a short life span. This is a case report of hydranencephaly in a 20 day old neonate. Baby looked normal at birth, developed increasing head size and excessive cry. Transfontanelle ultrasound scan revealed absence cerebral hemisphere with massive cerebrospinal fluid.

A 20 day-old male infant who presented with fever, excessive crying and increasing head size. He was delivered to a 20 year-old primiparous mother by Emergency caesarean section as a result of cephalopelvic disproportion. Mother attended antenatal care at a peripheral hospital, there was no history of maternal febrile illness in pregnancy and no histoty of maternal exposure to irradiation. Mother was not diabetic or hypertensive, she only took routine antenatal drugs like fersolate and folic acid in pregnancy. Baby cried well at birth, birth weight was 3.2 kg, head circumference at birth was 38 cm. No abnormality was detected at birth by the attending physician.

At presentation head circumference was 43 cm (> 97th percentile for age) ,with craniofacial disproportion, large anterior fontanel measuring 9 cm by 8 cm, it was bulging and tensed. The posterior fontanel was also patent and enlarged, sutural diastasis was also present. Pupils were equal in size, primitive reflexes like suckling and grasp were intact. He had normal tone on the limbs. He was febrile with a temperature of 38°C. Examination of the spine was normal. Examination of other systems was essentially normal. Initial diagnosis was hydrocephalus and neonatal meningitis. Fever resolved following use of antibiotics. Transfontannel ultrasound scan showed absent cerebral hemispheres bilaterally with massive cerebrospinal fluid filling the supratentorial space( Figure 1), incomplete echogenic falx cerebri (Figure 2), The thalami appeared normal including structures in the posterior fossa (Figure 3).

The parents were counselled on the diagnosis and the prognosis and the need for follow up at the neonatology unit and neurosurgery unit of the hospital. 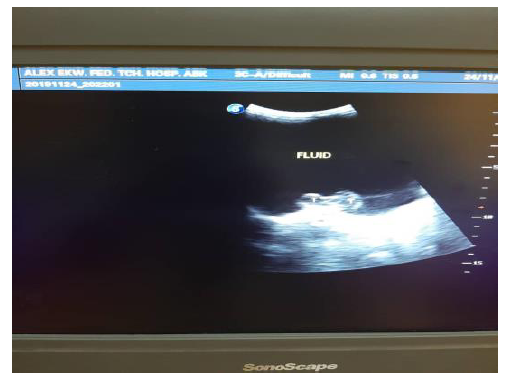 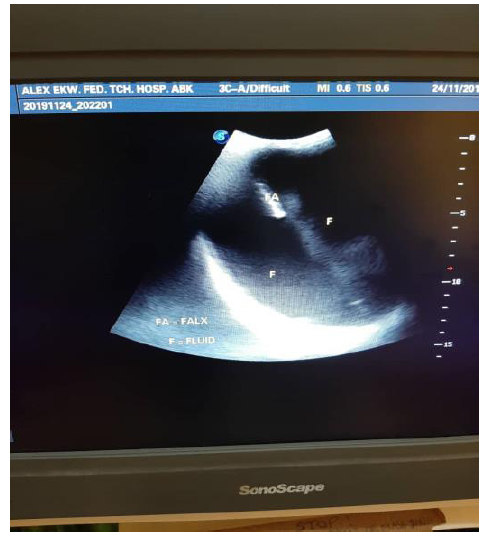 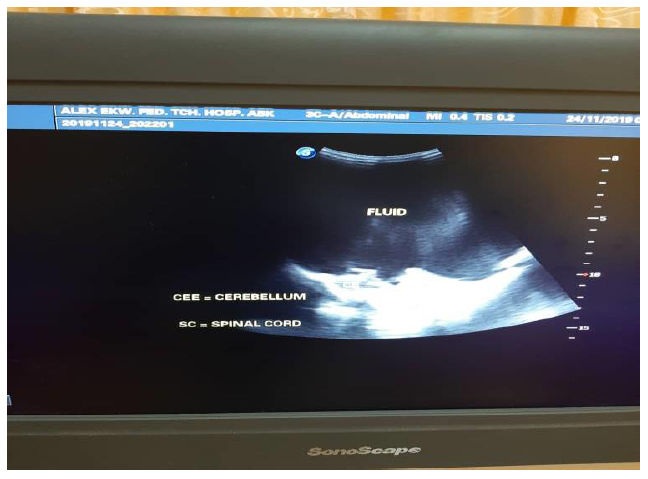 Figure 3: The thalami appeared normal including structures in the posterior fossa.

Hydranencephaly is a rare central nervous system disorder that occurs in-utero. The cerebral hemisphere is absent and replaced with a sac containing cerebrospinal fluid. Various aetiologies have been proposed this include bilateral occlusion of the internal carotid arteries that leads to necrosis and haemorrhage of the developing brain [1-6]. Congenital infections like herpes simplex virus, toxoplasmosis, Zika virus has also been implicated in the aetiology. Hydranenephaly was reported in a case of maternal drug abuse by Selpulveda et al. [7]. Also Intrauterine demise of one fetus in a twin gestation has been shown to be associated with this condition [8]. The posterior fossa structures are usually preserved as seen in the index case due to non affectation of basilar vessels supplying these region [7, 9, 10].

At birth the suspicion of hydranencephaly may not be present as the baby may appear apparently normal [8, 11, 12] until few weeks after birth before symptoms develop. Enlarging head size which is one of the early signs that brings patient to the hospital as observed in the index case. Other features include blindness from birth, hypertelorism, seizures [9, 10]. Excessive crying observed in the index case is similar to that reported by Hamby et al. [13] as a constant finding in the 7 cases reported by the authors. The differential diagnosis of hyranencephaly include other cause of enlarging head size in an infant like hydrocephalus, holoprocencephaly, procencephaly [14] which can be differentiated with imaging studies.

The most important imaging modalities for evaluation of hydranencephaly include, [8,15] Ultrasonography, Computerized Tomography (CT scan) and Magnetic Resonance Imaging (MRI). Ultrasound scan demonstrates hydranencephaly as a large cystic mass occupying the whole of the cranial cavity with absence or near-absence of the cerebral cortex and of the midline echo (falx cerebri). In alobar holoprosencephaly or extreme hydrocephalus, the cystic structure is still surrounded by a cerebral cortical rim and the choroid plexuses are visible. Magnetic resonance imaging (MRI), is the gold standard imaging modality for evaluating patients with hydranencephaly and for visualization of the cerebral cortical remnants [16, 17]. Prenatal MRI can be used to confirm or establish the diagnosis in difficult cases.