Kidney Enlargement Suppression by Cinacalcet In ADPKD Patient With Hemodialysis: A Case Report

Autosomal dominant polycystic kidney disease (ADPKD) is a common type of inherited kidney disease and the fourth leading cause of end-stage renal disease (ESRD). A massively enlarged kidney can impact quality of life, thus volume reduction interventions including transcatheter arterial embolization are generally performed. Although those are effective, several clinical problems such as bleeding, severe pain, or fever can develop. Thus, an effective safe therapy for suppressing progression of kidney enlargement for ESRD patients with ADPKD is desired. A 51- year old male with ADPKD began hemodialysis in 2000. However, total kidney volume (TKV) continued to increase from 2937 mL in February 2006 to 3652 mL in February 2008. For secondary hyperparathyroidism as reflected by serum intact parathyroid hormone level at 370 pg/mL, cinacalcet, an allosteric modulator of the calcium-sensing receptor, was started at the daily dose of 25 mg on February 18, 2008. During 1-year of cinacalcet treatment, TKV remained unchanged at 3189 mL on January 30, 2009, although, with its discontinuation for one year thereafter, TKV exhibited a remarkable increase to 3729 mL on January 26, 2010. Cinacalcet-related hypocalcemia was not noted because serum calcium level was controlled with an intravenous vitamin D receptor agonist and calcium-containing phosphate binders. Findings in this case suggest a novel and potential therapeutic effect of cinacalcet to suppress kidney enlargement in ADPKD patients.

Autosomal dominant polycystic kidney disease (ADPKD) is an inherited disease characterized by development of fluid-full cysts in the kidneys [1]. As the cysts grow, the kidneys progressively become enlarged, leading to deterioration of function develop end-stage renal disease (ESRD) [2]. ADPKD is the fourth leading cause of ESRD following diabetes, glomerular nephritis, and hypertensive nephrosclerosis, with approximately 50% of affected patients requiring renal replacement before the age of 70 years [3]. In Japan, approximately 1000 annual cases of ESRD are attributable to ADPKD [4].

In chronic kidney disease patients, along with deterioration of renal function, total kidney volume (TKV) also generally decreases. However, TKV in ADPKD patients usually continues to increase, even after initiation of dialysis therapy, since normal renal parenchyma is replaced by numerous cysts [5]. Resultant kidney pain, biomechanical stress, stretching of the renal capsule, and/or pressure on other organs caused by kidney enlargement can impact affected patients [6], and occasionally, a massively enlarged kidney requires volume reduction intervention to relieve symptoms and improve quality of life. Several methods including needle aspiration and sclerosing of renal cysts, fenestration, nephrectomy, and transcatheter arterial embolization (TAE) are generally performed and have been found to be effective, though such intervention met with various clinical problems including bleeding, severe frank pain, and fever [5]. Thus, an effective safe therapy that suppresses progression of kidney enlargement in ESRD patients with ADPKD is desired.

This case report describes an ADPKD hemodialysis patient who was prescribed with cinacalcet hydrochloride, a first-generation calcimimetics. After starting oral administration, TKV did not increase, though was immediately elevated after discontinuation. The present findings suggest a potential therapeutic effect of cinacalcet to suppress kidney enlargement in ADPKD patients.

A 47-year-old male was diagnosed with ADPKD based on results obtained during surgery for an abdominal hernia in 1996. A family history of the disease was noted, including his father who was affected by ESRD and his daughter who was also diagnosed with ADPKD. The patient was found to have multiple liver cysts, though no other complications were noted, such as brain aneurysm or heart valve disease. As treatment, four-hour hemodialysis sessions were conducted three times a week from 2000 at Shirasagi Hospital. An abdominal computer tomography (CT) examination performed on February 14, 2006 revealed enlargement of the bilateral kidneys with multiple cysts of various sizes and a TKV of 2937 mL.

Figure 1 shows changes in serum intact parathyroid hormone (PTH) levels. That was 370 pg/mL on January 8, 2007, indicating complication with secondary hyperparathyroidism (SHPT). Accordingly, 0.5 µg of calcitriol, an intravenous vitamin D receptor agonist (VDRA), was administrated at each hemodialysis session starting from January 10, 2007. Thereafter, the dose was increased on March 7, 2007 to a total of 2.5 µg per week, resulting in gradual improvement of serum intact PTH level from 487 pg/mL on March 5, 2007 to 265 pg/mL on January 7, 2008. Nevertheless, even with continued calcitriol treatment, serum intact PTH again increased to 323 pg/mL on February 4, 2008, thus cinacalcet at a daily dose of 25 mg was started on February 18, 2008 to achieve a target serum intact PTH level between 60 and 180 pg/mL, as defined by the 2006 Japanese guidelines for management of secondary hyperparathyroidism in chronic dialysis patients [7]. Other medications at the initiation of cinacalcet were sevelamer hydrochloride (2250 mg), calcium carbonate (4500 mg), olmesartan (40 mg), cilnidipine (20 mg), rabeprazole (10 mg), and L-glutamine (2 g). 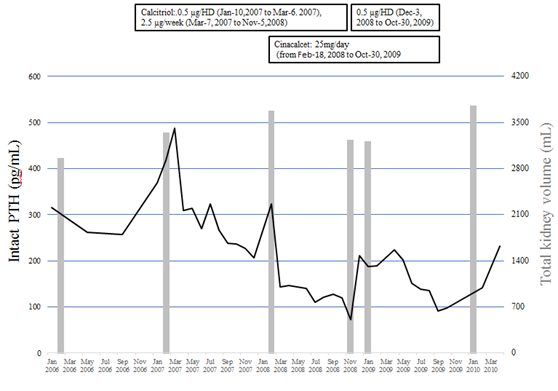 Table 1 shows clinical characteristics and laboratory data just before initiation of cinacalcet. One month after starting administration, the serum intact PTH level was decreased to 144 pg/mL, thus the daily dose at 25 mg of cinacalcet was continued. On November 5, 2008, intact PTH was found to be decreased to 72.5 pg/mL without hypocalcemia and calcitriol was temporary discontinued. However, the next month, intact PTH had increased to 211 pg/mL, thus calcitriol was re-administrated at a dose of 0.5 µg at every hemodialysis session. October 20, 2009, the patient was admitted to anther hospital with a perianal abscess, which had resulted in decreased appetite because of pain and oral medications including cinacalcet were discontinued. He returned to our hospital on January 15, 2010 and maintenance hemodialysis was resumed. Later, the patient was admitted to anther hospital due to lower gastrointestinal bleeding and died on September 4, 2010. 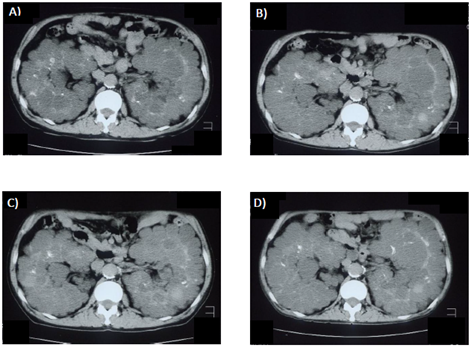 In the present case, cinacalcet was found to suppress kidney enlargement in an ADPKD patient with SHPT undergoing hemodialysis. Cinacalcet hydrochloride was developed as a second-generation analog of NPS R-568, a phenylalkamine type II compound [8], and approved in Japan to treat SHPT in dialysis patients in January 2008. Previous studies including ours have demonstrated that cinacalcet hydrochloride reduces serum PTH levels in hemodialysis patients with SHPT [9, 10], and simultaneously with reduction of swollen parathyroid glands over a long term [11]. Findings in the present case suggest a beneficial effect of cinacalcet to suppress kidney enlargement in addition to its protective effect against parathyroid gland enlargement.

Previous in vivo and in vitro studies indicated that calcium signaling dysregulation, represented by an elevated adenosine-3′,5′-cyclic monophosphate (cAMP) level, is one of the pivotal promoters of kidney-cyst cell proliferation and luminal fluid secretion in ADPKD [12, 13]. Intracellular calcium and cAMP levels are regulated by extracellular calcium-sensing receptor (CaSR) activation [14]. CaSR has been identified in various organs, including parathyroid glands, basolateral membrane of the medullary thick ascending limb, cortical thick ascending limb and distal convoluted tubules, and apical surface of the inner medullary collecting duct [15]. For treatment of ADPKD in pre-dialysis patients, tolvaptan, a vasopressin V2 receptor antagonist, has been reported to suppress cAMP level in the kidney, and also inhibit cell proliferation and kidney enlargement in a dose-dependent manner [16]. Furthermore, its efficacy to prevent kidney enlargement and renal function deterioration has been established by results of two different pivotal clinical trials [17, 18]. However, tolvaptan is contraindicated for dialysis patients, because its efficacy and safety has not been proven. A recent study demonstrated that selective CaSR activation by NPS R-568, a first-generation calcimimetic compound [19], increases intracellular calcium and reduces cAMP in conditionally immortalized proximal tubular epithelial cells (ciPTC) in humans carrying a PKD1 mutation [20]. Thus, an allosteric modulator of CaSR treatment could suppress progression of kidney enlargement in ADPKD patients. However, the effects of calcimimetics on TKV in individuals with ADPKD have not been investigated. This is the first case report showing beneficial effects of cinacalcet to suppress kidney enlargement even after initiation of hemodialysis in an ADPKD patient.

Generally, PTH stimulates synthesis of cAMP in the renal cortex and increases plasma cAMP levels [21]. Thus, we also investigated changes in serum PTH levels as well as TKV. In the present case, data could be obtained starting from 2006. Although the serum intact PTH level was decreased from 487 to 207 pg/mL by treatment with intravenous calcitriol, TKV continued to increase from 3324 mL on February 5, 2007 to 3652 mL on February 4, 2008, indicating that kidney enlargement in association with ADPKD was not suppressed and/or the intact PTH level in serum was not associated with progress of TKV. During administration of cinacalcet, TKV did not increase, whereas three months after discontinuation of cinacalcet it had increased to 3729 mL. These findings suggest that cinacalcet has a beneficial effect to suppress kidney enlargement, independent of serum PTH level.

Intervention to reduce TKV can cause complications, including serious conditions such as needle aspiration, sclerosis of renal cysts from perirenal hemorrhage arteriovenous fistula formation, and infection [5]. Although surgical decompression is effective, upper urinary collecting system injury, urinary tract infection, bleeding, and small bowel obstruction are potential complications [22]. Laparoscopic fenestration is contraindicated in patients with bleeding diathesis, or history of peritonitis or extensive intestinal surgery [23], while a nephrectomy in ADPKD cases is associated with substantial morbidity and mortality, thus should be avoided as much as possible [24]. TAE is a safe and effective procedure that generally improves quality of life and nutritional status, though complications such as severe frank pain and fever can occur within the first week after treatment. In a previous report, severe flank pain occurred one hour after the procedure in all patients, with peak pain noted within five days, while cases with a temperature greater than 38°C that persisted for up to eight days were also noted [5]. Since approval by the United States Food and Drug Administration more than 10 years ago, cinacalcet has been used for treatment of SHPT in chronic kidney disease patients, and a number of randomized control trials have demonstrated its efficacy and safety. A recent meta-analysis of related trials reported risk ratios of 8.37 for hypocalcemia, 2.10 for nausea, and 2.01 for vomiting with cinacalcet as compared to a placebo in hemodialysis patients [25]. Although hypocalcemia is the main adverse event associated with cinacalcet, it is easily controlled with use of a VDRA and/or calcium containing phosphate binder. In the present case, the lowest serum corrected calcium level was 9.0 mg/dL during treatment with intravenous calcitriol at 0.5 µg and 1500 mg of calcium carbonate. As compared to complications often seen with traditional volume reduction therapy, the adverse effects of cinacalcet are easily controlled. Although it is not used for volume reduction, cinacalcet is considered to be a safe therapeutic option.

This is the first case report to demonstrate good effects of cinacalcet to suppress kidney enlargement in an ADPKD patient. A calcimimetic drug may be considered as useful therapy for hemodialysis ADPKD patients with SHPT.

The authors thank the patient for permission to publish the case details as well as the staff of Shirasagi Hospital for their assistance.

There are no funding sources related to this report.

The ethics committee of Shirasagi Hospital, Osaka, Japan approved this study. An opt-out option, as explained in instructions posted on the website of the institution, was given to the patient.