Malignant rhabdoid tumor (MRT) of the thymus is rare aggressive tumor and only 34 cases are reported in the literature till date. Index case report describes a middle adult, female, with superior vena caval syndrome and prevascular space mass on chest axial scan, and histological features revealing MRT of thymus and metastatic spread. Contrast-enhanced CT neck and chest revealed aggressive tumor causing severe narrowing of the right internal jugular and superior vena-caval junction. This case represents an example to consider MRT along with other tumors like lymphoma, germinoma and anaplastic carcinoma of thyroid in subjects with aggressive prevascular space mass, and to consider biopsy specimen evaluation rather aspiration cytology evaluation for evaluation of mediastinal masses.

A 52-year-old female was apparently in her usual state of health when around three months back, then the patient started having progressive dysphagia for solids. She started experiencing mild dyspnoea which progressed in severity over a month to impair her routine activities as well as in her rest state. She came to medical attention for having cough, streaky hemoptysis, and painful nodules in her neck for a week. Her sleep and appetite were reduced. Facial puffiness and raised jugular venous pressure documented on general physical examination. In the course of hospital stay, her dyspnoea was worsened and her saturation was maintained on an oxygen mask with 50% of oxygen supplementation. Multiple enlarged lymph nodes were palpable at bilateral axillae and lower neck, and bilateral chest was stony dull on percussion. Her routine hematological parameters were normal. The pleural fluid analysis revealed a total count of 3200 cells with negative bacterial and fungal cultures. Blood culture was sterile. Echocardiography revealed pericardial effusion of ~30 mm thickness with pericardial deposits. Superior vena cava syndrome was suspected clinically and she was worked up further with imaging modalities, including chest radiograph, computed tomography of neck and chest, and image-guided sampling of mediastinal pathology detected on imaging. A standard frontal radiograph revealed a mediastinal mass, with blunting of bilateral costophrenic angles. Contrast-enhanced computed tomography (CT) was obtained to assess the accurate location and extent of the disease (Figure 1).

A large, heterogeneously enhancing, insinuating mass in pre-vascular space, measuring ~14.7 × 7 × 5.3 cm (CC × TR × AP) in its max dimension. Multiple areas of hypoattenuation (+22HU) components seen within the mass suggestive of liquefactive changes. The right internal jugular vein (IJV) and superior vena caval (SVC) junction were severely compressed by the mass, and mass seen infiltrating into the strap muscles and thyroid gland. Airways, thoracic aorta, arch and its vessels, pulmonary artery and its branches and pulmonary veins were encased by the mass, but there was no luminal compromise or frank invasion features were seen. The trachea and oesophagus were slightly deviated to the right. Multiple, enlarged, heterogeneous and lymph nodes identified in the mediastinum, bilateral hila and left axilla. Bilateral lungs showed multiple pulmonary nodules and patchy areas of ground-glass opacities (GGOs). Moderate pleural effusion (~4.8 cm thickness) with atelectasis of basal lungs and a pleural based mass measuring ~ 2.5 × 2 cm seen at the right side. Mild pericardial effusion is seen measuring ~6 cm in its thickness, with no extension of mass into the cardiac surface. Aggressive malignant lesions of superior mediastinum like anaplastic carcinoma of the thyroid, thymic carcinoma, germinoma and lymphoma with metastatic disease status, were considered as possible differential diagnoses and advised biopsy for histopathological confirmation.

Initial FNAC (fine needle aspiration cytology) examination reported it as a peripheral primitive neuroectodermal tumor of the superior mediastinum. The core biopsy of the above described mediastinal mass, reported as sheets of tumor cells of large to intermediate size and oval shape were showing eccentric hyperchromatic nuclei and moderate to an abundant amount of eosinophilic cytoplasm (Figure 2). Few of the cells were showing prominent nucleoli and eosinophilic cytoplasmic inclusions. Skeletal muscle infiltration was seen. Immuno-histochemistry revealed Pancytokeratin and vimentin-positive tumor cells with loss of expression of INI1. The synaptophysin, CD 38, CD 56, CD 3, CD 20, CD 138, MUM 1, CD 45 & SALL4 were negative (Figure 2).

The biopsy reported the malignant rhabdoid tumor of the thymus. The patient was counseled and referred to the oncology department, and she was started on chemotherapy with vincristine, dactinomycin, and cyclophosphamide. The patient succumbed after one month. 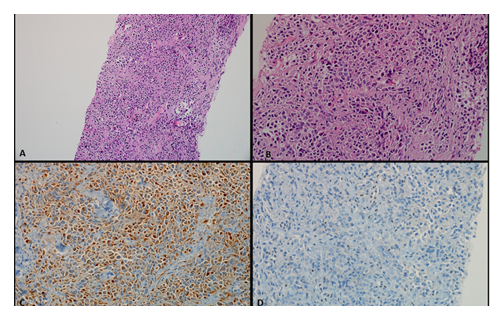 Figure 2: Core biopsy showed presence of tumor cells in sheets. (Hematoxylin and eosin, 100x) (A). These tumor cells are intermediate to large sized with eccentrically placed nucleus, prominent nucleoli and moderate to abundant amount of eosinophilic inclusion like cytoplasm which is pushing the nucleus to the periphery (B). (Hematoxylin and eosin, 400x) The tumor cells were positive vimentin and pan-cytokeratin (C), and (immunohistochemistry, 400x) The tumor cells showed loss of INI-1 expression with interspersed inflammatory cells serving as positive internal control (INI-1 immunohistochemistry, 400x) (D).

Rhabdoid tumors originally described by Beckwith and Palmer in the kidney [1] are highly malignant tumors of children, now identified in many extrarenal sites, including mediastinum [2-3]. Malignant rhabdoid tumors of the mediastinum are very rare. So far to the best of our knowledge only 34 cases have been reported in the literature [4].

Ng et al in their review of case reports and case series found bimodal age distribution of MRT with the first peak during childhood and second peak during the 4th-5th decades of life with male preponderance (M: F ratio 2.6:1) [4]. Falconieri et al described the clinicopathological behavior of 6 intrathoracic rhabdoid tumors with 2 cases occurring in the anterior mediastinum [3]. Saueter et al have described 40 cases of undifferentiated thoracic sarcomas with rhabdoid morphology, with 18 mediastinal rhabdoid tumors; in which 7 cases SMARCA4/BRG1 deficient tumors showed to have aggressive clinical behavior and poor prognosis. However, no data was available on SMARCAA/BRG1 positive patients [5]. Yoshida A et al on their study of 12 cases of SMARCA4/BRG1 deficient tumors found that they were a distinct entity than the rhabdoid carcinoma of thymus on clinicopathological behavior and immunohistochemistry evaluation [6].

MRT usually presents with compressive symptoms like shortness of breath, cough, chest pain, hemoptysis, and few constitutional symptoms like loss of weight, appetite, night sweats, etc. When the lesion is advanced, it may present with phrenic nerve palsy, superior venacaval syndrome, pleural and pericardial effusions as in index case. Due to the highly malignant and aggressive nature of the tumor, they present with local infiltration and distant metastasis at the time of diagnosis. Our patient also presented late at an advanced stage with bilateral pleural and pericardial effusion and superior venacaval syndrome. Except for one case described by Sauter et al with thrombosis of IJV [5], so far, no cases of SVC syndrome have been reported with the MRT.

Imaging is of paramount importance in confirming the mass lesion, localizing its extent, characterizing the nature of the mass and identification of invasion or loco-regional metastasis, and hence resectability [7]. CT scan and/or MRI is the initial investigation of choice and shows heterogeneously enhancing mass in the pre-vascular space compressing or infiltrating adjacent mediastinal structures [5, 7-10]. CT scan of our patient revealed encasement of the trachea and bronchi, and displacement of the aorta and pulmonary artery without significant luminal narrowing. MRI can particularly helpful to assess the structural neuronal infiltration. However, there was significant compression of proximal SVC and IJV with redirection of blood flow. Multiple hilar and mediastinal lymph nodes were also identified along with the bilateral pleural nodules with effusion and pericardial nodules with effusion indicating the advance stage.

The majority of the anterior mediastinal masses can be grouped into thymic tumors, lymphoma, germ cell tumors, ectopic thyroidal mass, and metastatic lesions [11]. In many cases, along with clinical and biochemical findings, imaging helps to differentiate them. When the mass is well circumscribed and hence resectable, tissue diagnosis is not even necessary preoperatively. However, when the diagnosis is not clear, mass is infiltrative with local invasion or distant metastasis, tissue diagnosis with core biopsy is essential to guide therapy. The morphology of the MRT shows diffuse proliferation of round to polygonal cells with large glassy, eosinophilic cytoplasmic inclusions displacing nuclei towards the periphery. The histological differential includes all tumors with small blue round tumor cells, the most important of which is a rhabdoid tumor of the lung invading the mediastinum, PNET, or rarely rhabdoid differentiated metastatic melanoma. In our case also, an initial report from FNAC showed small blue round tumor cells mimicking the neuroectodermal tumors. However, core biopsy with the immuno-histochemistry revealed Pancytokeratin and vimentin-positive tumor cells with loss of expression of INI1, confirming rhabdoid tumors. The synaptophysin, CD 38, CD 56, CD 3, CD 20, CD 138, MUM 1, CD 45 & SALL4 were negative. Although CD5, CD117, PAX8 may be helpful, no thymic specific marker can differentiate between the primary rhabdoid tumor of thymus from metastasis. Hence, it remains a diagnosis of exclusion.

Despite the effort by the ITMIG and AJCC to guide the treatment of thymic malignancies based on staging, there is no established treatment recommendation for MRT due to sparingly reported cases. Owing to their aggressive nature and presentation at advanced stage chemotherapy and/or radiotherapy is tried with little success. The median survival after diagnosis is 3-6 months. Since our patient had an advanced stage of disease with local infiltration and malignant pleural and pericardial effusion, non-surgical treatment with chemotherapy was sought out. Despite chemotherapy, she died in a month.

The clinicopathological behavior of the MRT irrespective of the location is found to be identical. Hence, further research focusing on targeted therapy on tumor biology [12] rather than anatomic location may prove beneficial.

Malignant rhabdoid tumors although rare, should be kept in the differential diagnosis of any aggressive anterior mediastinal mass especially with SVC syndrome. Prompt evaluation and early diagnosis with a core biopsy should be done to initiate early treatment and maximize survival. Further research needs to be done to identify targeted therapy and the efficacy of treatment modalities.