The thyroid analogue arises from the floor of the primitive pharynx between the first and the second pharyngeal pouches. Originally hollow, it becomes solid as it migrates to the lower neck, the lower end dividing in to two portions that become the thyroid lobes. The stalk should atrophy at the sixth week but if it persists it becomes the thyroglossal duct in which cysts can develop. It runs from the thyroid gland behind, through or in front of the hyoid bone and ends deeply at the foramen caecum of the tongue. Very rarely, they may occupy the posterior hyoid space and present with dysphagia. We are presently sharing the clinical, pathophysiologic features and intraoperative findings of thyroglossal cyst mislead by neck trauma.

Thyroglossal duct cysts are the most frequently occurring congenital cervical anomalies. This case illustrates the need to consider thyroglossal duct cysts in the differential diagnosis when working up a post-traumatic sinus of neck, especially with discharge and without obvious neck swelling.

A 25-year-old female patient presented to the ENT clinic with discharge from the anterior neck and a scar (Figure 1) over the neck for the past 10 years. Patient gave a history of neck trauma in childhood while playing in a park. She was treated symptomatically in a local clinic and later on developed a neck scar without no other symptoms. Patient mentioned that she has been noticing some discharge from the scar site on and off within a period of the last 2 years. On detailed clinical examination, we found a small sinus tract which gave discharge on pressure. Preoperative imaging is important to differentiate the thyroglossal duct cyst from other lesions, to confirm the diagnosis, to identify the presence of functioning thyroid tissue in the neck, and to detect any possibility of malignant changes within the cyst, hence we requested for CT. CT revealed and ended blindly in close relation to the anterior strap muscles (Figures 2a and 2b). Additionally, the CT scan showed that the thyroid gland was within the normal position. As per the history, clinical examination, and investigation, this lesion was diagnosed as a ‘post traumatic neck scar with sinus of the neck’. Since the patient was concerned about the neck scar, we decided to do a multidisciplinary approach ‘A simple sinus excision with Z-plasty’. The excision revealed a tubular structure extending short of the hyoid bone around 5 cm in length (Figures 3 and 4). The specimen was sent for histopathologic examination. The histological hematoxylin and eosin sections revealed a flattened epithelium supported by a fibro collagenous cystic wall hinting the presence of a thyroglossal cyst. The final pathologic diagnosis was confirmed as thyroglossal duct cyst after a compiled evaluation of the diagnostic procedures. Wound closure method used was Z- plasty technique which was meticulously done by the plastic surgeon (Figure 5). Z-plasty is a plastic surgery technique used to improve the functional and cosmetic appearance of scars. It involves the creation of two triangular flaps of equal dimension that are then transposed. After the surgery, routine postoperative measures were advocated and the patient was discharged as postoperative recovery was uneventful (Figure 6). 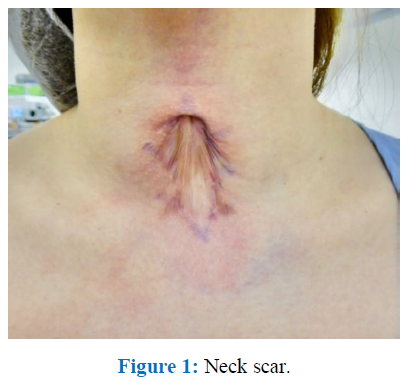 Figure 2a and 2b: CT Neck with contrast (5a Axial & 5b Sagittal view): Focal skin defect representing post-traumatic scar based on the history seen in the anterior part of the neck at the level of thyroid gland, C6 vertebral level. A short sinus tract is seen extending from this scar, coursing superiorly in subcutaneous plane, for 2 cm and ending blindly in close relation to the anterior strap muscles. No definite internal extension into the larynx or pharynx. 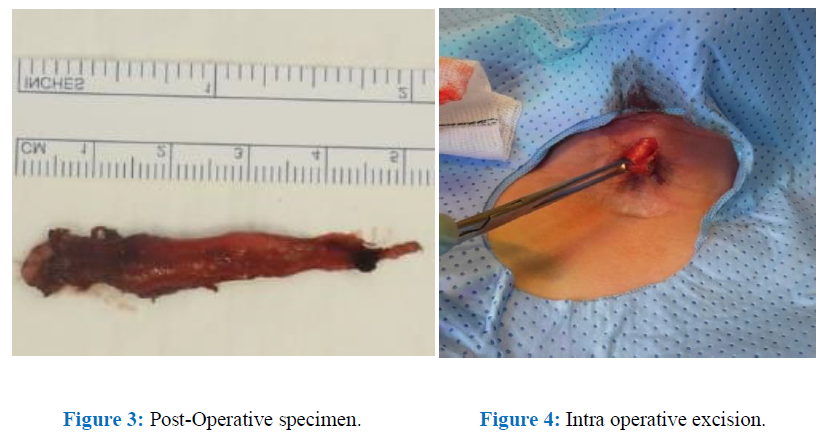 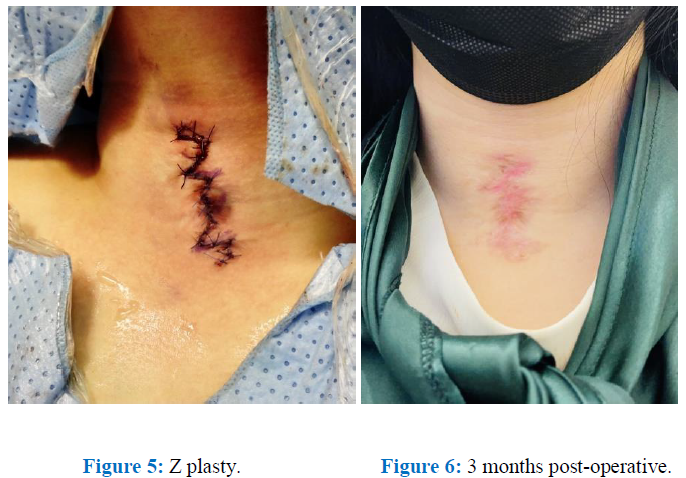 Thyroglossal duct cysts are present in about 7% of the population worldwide. They have an equal preponderance between male and female individuals. Although they are known to be the most common pediatric mass, they also present in adults with varying frequency. These types of cysts are closely associated with the hyoid bone. Thyroglossal duct cysts can be found anywhere between the foramen cecum at the base of the tongue to the level of the suprasternal notch. There are four general locations of thethyroglossal duct cyst– intralingual (2.1%), suprahyoid (24.1%), thyrohyoid (60.9%) and suprasternal (12.9%).This article reports a rare case of athyroglossal duct cyst which occupies the posterior hyoid space thereby causing dysphagia [5, 6]. Thyroglossal duct cysts result from failure of obliteration of the thyroglossal ducts which form a bridge between the base of the tongue and thyroid gland. Thyroglossal Duct Cysts usually presents as a painless cystic mobile fluctuant swelling in close proximity to the hyoid bone [1-3] which moves with deglutition and protrusion of tongue. Movement of the cyst with swallowing is often cited as a reliable diagnostic sign. In adults, one-fourth of patients presented with draining sinus that resulted from spontaneous drainage or surgical drainage of the abscess [4]. In our patient, there were no functional impairments, only neck discharge with mild dysphagia. Preoperative imaging such as CT is important to confirm the diagnosis of atypical cases, to differentiate thyroglossal duct cysts from other lesions, to identify the presence of functioning thyroid tissue in the neck and to detect any possibility of malignant change within the cyst; additionally, it plays a supplementary role in more accurately delineating the anatomy of the lesion.

Thyroglossal duct cysts are cystic structures lined by respiratory epithelium, squamous epithelium, or a combination of both. Due to a high frequency of infection, inflammatory infiltrates can be present. These can appear as granulation tissue or giant cells. In about 70% of cases, microscopic foci of ectopic thyroid gland tissue can be found, usually within the cyst wall. The differential diagnosis of thyroglossal duct cysts includes midline neck mass and cystic neck mass, as well as cystic metastatic lymph nodes, dermoid or epidermoid cysts, and second branchial cleft cysts.

The treatment for thyroglossal duct cysts is surgical excision to prevent recurrent infections due to the small risk of malignancy. The Sistrunk operation is considered the standard of surgical management and has dramatically reduced recurrence rates. This procedure requires a more extensive surgical resection including the central third of the hyoid bone and a core of the base of the tongue tissue. In our patient, since the sinus tract was small and short, extending from the scar advancing superiorly into the subcutaneous plane, a simple excision was executed. The excision revealed a tubular structure extending short of the hyoid bone around 5 cm in length.

Although our study is too small to reach any definite conclusion, it does caution us that when we come across a sinus of neck without obvious neck mass, a thyroglossal duct cyst should be ruled out. This case illustrates the need to consider thyroglossal duct cysts in the differential diagnosis when working up a post-traumatic sinus of neck with discharge even without obvious neck mass.