Ovarian Hemangioma Presented as an Incidental Ovarian Mass: A Rare Case Report along with Literature Review

Vascular malformation tumors in the female genital tract, especially those arising in the ovary are uncommon with low morbidity. Ovarian hemangioma (OH) featured as a benign rare tumor occurs among adults and children with the age ranging from infancy till octogenarian. Moreover, it presents as an obscured landscape in the backdrop of other gynecologic issues, making hard accuracy perceiving an isolated diagnosis. Usually asymptomatic cases amid patients are being investigated, remaining in dormant phase for a long time and until simultaneously cohabiting with another primary pathology. Metrorrhagia, a dysfunction uterine bleeding, might be a unique sign or association with suprapubic abdominal pain may suggest a vascular ovarian hemangioma.

Here we analyze a case of a 44-year-old female that underwent a surgical intervention of uterine leiomyoma leading to the diagnosis of infrequent latent cavernous and capillary hemangioma in the right ovary with normal tumor markers. Radiologic evaluation settled the symptomatic leiomyoma diagnosis and orientated us to presume an ambiguous investigation as a slightly right adnexa enlargement was recognized. Furthermore, a detailed microscopic examination and immunohistochemistry staining process was significant to confirm the blended type of ovarian hemangioma.

Hemangiomas are benign overgrowth vascular cells occur in the body more often located in the skin and inner structure of the organs such as liver, muscle, bone. Ovarian hemangioma, a vascular malformation originating in the female genital tract is a very rare condition often misled to a cancerous condition or diagnosed during autopsy. Recently, it has been reported very few cases in articles all over the world featuring all ages from childhood till elderly. The overall number of the well-documented cases of (OH) does not exceed 60 [1]. Frequently this vascular proliferation histologically is classified as a cavernous form compared to the capillary one or blended type. Microscopically cavernous hemangioma is formed by proliferated vessels that are fragile due to uncial endothelial sheathed layer causing drip or leakage of the blood into the cavity leading sometimes to peritonitis or massive ascites. This type of hemangioma may happen to be spread all over the abdominal cavity or involving the adnexa either [2, 3]. Other complications will be ovarian torsion or elevated (CA)-125 and CA 19-9 tumor markers resembling a malignant tumor [1]. Whereas, capillary Hemangioma are characterized as tiny vessels close to each other occupying the ovary, usually asymptomatic, not causing hemorrhage in the closer structures. Moreover, it is seen that one or two OH are non functional neoplasms [4]. They are thought to develop due to cyclic changes that ovaries undergo during the reproductive years. Hypothetically Stromal luteinization may play a key role in vascular proliferation involving here the hyperestrogenism or overproduction of androgens inciting the endothelial lesion. However, its pathogenesis is not known clear yet [2, 3, 5-7].

We report a case of a 44 years old woman admitted to our hospital with abdominal pain and dysfunctional uterine bleeding. After the clinical and radiological assessments, a diagnosis of uterine leiomyoma was made. The next step was the surgical procedure. She underwent a total hysterectomy along with the removal of the adnexa. Primary ovarian hemangioma was an incidental finding during the histopathological examination of the specimen. Macroscopically the right ovary presented fairly enlarged with a clean glistening outer ground displaying a purple or purplish coloration. On lessen surfaces spongy textured and honeycomb appearance due to multiloculated cystic regions crammed with frank blood or serous fluid and multiloculated cystic spaces filled with blood. 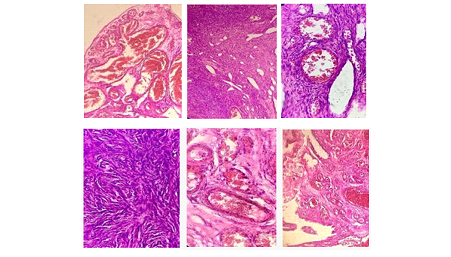 Figure 1: Microscopic examination of the ovary revealed blended type cavernous and capillary hemangioma with the cavernous one predominating. High power view of the H&E stained slides revealed multiple various sized thin-walled blood vessels, filled with red blood cells. These vessels were lined by a single, flattened endothelial cells without atypical features. The vessels may show a roughly lobular association in a variable quantity of connective tissue stroma in which inflammation, hemorrhage and hemosiderin deposits can be seen. Histologically, they show each a cavernous capillary or blended type with the cavernous one predominating.

Hemangiomas are benign vascular tumors arising from failure in vascular formation, particularly in the canalizing process, resulting in abnormal vascular channels. These are three types based on the evaluation of the size of the blood vessels formed: cavernous, capillary and a mix type. Despite the rich vascularity of the ovary, the incidence of ovarian hemangioma is rare. They are usually asymptomatic and present as incidental finding especially small lesion as in our case during operation or autopsy although they may occasionally be large and symptomatic [8]. Macroscopically, ovarian hemangiomas are commonly small and the dimension of the lesion has been stated from 5 mm to 24 cm inside the first-class diameter. The etiology remains unknown, these lesions have been considered either hamartomatous or true neoplasms in which pregnancy, other hormonal effects, or infection have been implicated as risk factors in defective vascular formation [9]. Differential diagnosis of OH include tubo-ovarian mass, chocolate cyst, but the main pathological differential diagnosis are those of vascular proliferations, lymphangioma and mono-dermal teratoma composed of a prominent vascular component [10]. According to the first hypothesis hyperestrogenism became taken into consideration as a first event derived from stromal hyperthecosis or stromal hyperplasia, that could lead to spur the evolution of an ovarian hemangioma. Estrogen has proven growth stimulatory impacts on endothelial cells and most hemangiomas do explicit estrogen receptors on endothelial cells [5, 8]. Alternatively, the second hypothesis is a mechanical concept proposing that ovarian hemangioma changed into the primary occasion that led to stromal luteinization due to growth of the mass.

These luteinized stromal cells produce steroid hormones, mainly androgens, which are subsequently converted to estrogens in adipose tissue, that cause unopposed estrogen stimulation to the endometrium [5, 11]. In bilateral stromal luteinization, the changes are outstanding in the ovary containing the tumor [8, 11-13]. Acquired hemangioma by extended utilization of tamoxifen, has been pronounced in patients with preceding presence of little hemangioma that could not have been detected via ultrasound exam [12].

Cowden syndrome is a genetic syndrome usually caused by mutations in a gene known as PTEN. It has been seen an incidence of 10-40% of hemangiomas in people with Cowden syndrome [14]. Differential diagnosis of OH includes tubo-ovarian mass, chocolate cyst, but the main pathological differential diagnosis is those of vascular proliferation as angiosarcoma, lymphangioma and mono-dermal teratoma composed of a prominent vascular component [10].

Misdiagnosis with teratoma is made due to the outstanding vascular component. In cases like these, cautious sampling is important to pass over the presence of different teratomatous factors earlier than diagnosing the tumor as a pure hemangioma [6, 15].

The presence of RBC in hemangioma, excludes the possibility of lymphangioma [16]. The unilateral position, cystic, soft, friable and spongy appearance with hemorrhage and necrosis leads toward the diagnosis of angiosarcoma. Histologically stumble on marked cytologic atypia, increased mitotic activity, pleomorphism, papillary endothelial tufting, necrosis, hemorrhage [17]. Hemangioma in the ovary needs to be differentiated from proliferations of dilated blood vessels of the ovarian hilar region. Presence of circumscribed nodules or a mass strongly supports the potentiality of hemangiomas [18].

MR imaging and color Doppler ultrasound are valuable for detecting preoperative ovarian hemangioma [19, 20] showing a richly vascularized tumor with distinguished blood. Infrequently, OH is represented as nonfunctional vascular neoplasms of the ovary. Sometimes we might see them associated with ascites and highly increased serum of CA-125, clinically imitating an ovarian carcinoma. Some of ovarian hemangioma cases are interconnected with thrombocytopenia, ovarian stromal luteinization, postmenopausal bleeding, endometrial hyperplasia, or even endometrial carcinoma [5-7, 11, 12, 21]. The diminished platelet count number is considered as one of the manifestations of Kasabach and Merritt Syndrome, especially in bilateral instances related with diffuse abdominopelvic hemangiomatosis [17]. Ovarian hemangioma coexistence with non-ovarian neoplasm such as cervical carcinoma, endometrial carcinoma, rectosigmoid carcinoma, and tubal carcinoma has additionally been studied [5,10].

Hemangiomas of the ovary are very rare neoplasms with a wide age range and incidental discovery during operation or autopsy. The aim of this article is to emphasize that even though these neoplasms are very rare in the ovary, they should be considered in the differential diagnosis of a hemorrhagic ovarian lesion.