Paradoxical Presentation In A Case of Deep Frontal Lobe Abscess

A pyogenic brain abscess may start initially with cerebritis and later develop a capsule and a necrotic centre thus, forming an abscess. A pyogenic abscess is not uncommon and can be due to a multitude of organisms. It may occur due to spread from a contiguous focus, haematogenous spread or head trauma etc. We report here, a case with no detectable source of infection in a case with a left to right shunt patent foramen ovale (PFO). Such a shunt is an unusual presentation as only a right to left shunt is known to bypass the pulmonary filter and lead to seeding, in the absence of a coexisting pulmonary arteriovenous malformation.

A brain abscess is a relatively uncommon, yet life-threatening condition. They are frequently known to arise from a contiguous source of infection or via haematogenous spread. In such cases, which are potentially fatal it is of utmost importance to know the source of infection, but unfortunately 10 to 35 % of brain abscesses are cryptogenic[1]. In cases with cardiac anomalies which have right to left shunting of blood, the foci of infection can bypass the pulmonary filter and embolise in the cerebral microvasculature and cause a brain abscess; but in cases with only a left to right shunting of blood such a result is unreported without the presence of coexisting arteriovenous malformations. In this report, we present a case of a brain abscess that occurred in an apparently healthy young female patient presenting with complaints of jaundice and diarrhoea with an undetected PFO, who did not have any clinically apparent source of infection throughout her course in the hospital.

A 20-year-old female presented to the emergency room with fever, chills, vomiting along with complaints of jaundice and watery stools for about a week. She admitted to consuming alternative medicine for the same. On arrival her O2 saturation was 88% on room air, Pulse was 98 beats/min and regular, Respiratory rate was 22 cycles/min, her temperature was 99.5? and blood pressure was 100/60 mm of Hg. On admission, she was fully conscious and aware of her surroundings with a Glasgow Coma Scale (GCS) of 15.

On examination, icterus, clubbing and cyanotic features were noted. She was admitted to the general medicine ward for further management. On the second-day post admission, she was found to be drowsy, disoriented, speaking only a couple of words on repeated questioning and was moving all limbs with no focal deficits. Computed Tomography (CT) and Contrast Enhanced Magnetic Resonance Imaging (MRI) (Figure 1) of the brain revealed a deep right frontal lobe brain abscess communicating with the frontal horn of lateral ventricle resulting in ventriculitis and choroiditis with adjacent subacute haemorrhage. There was no evidence of any foci of infection in contiguous locations. Magnetic Resonance Spectroscopy (MRS) revealed evidence of high lipid/lactate peak decreased choline and N-Acetyl Aspartate (NAA). 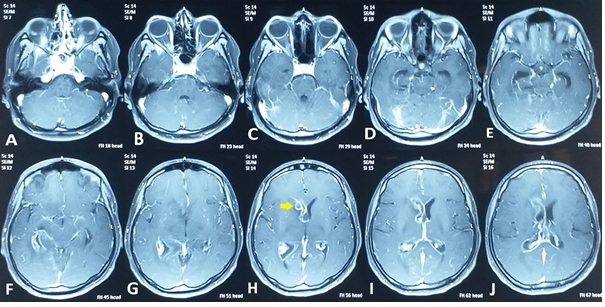 Figure 1: Axial cuts of the Contrast Enhanced MRI showing the abscess (marked with a yellow arrow) in panes H, I and J.

Serial blood and urine cultures did not show any growth. She was then referred to neurosurgery and managed in the Intensive Care Unit (ICU). On admission to the ICU, the patient’s relatives revealed a history of cyanotic spells since childhood.

In the absence of any overt cardiac causative factors causing brain abscess, a pulmonary angiography was done to rule out pulmonary arteriovenous malformations. This revealed a normal pulmonary vasculature. Due to a small sized single abscess, the patient was managed conservatively with antibiotics; she was given meropenem-sulbactam along with metronidazole and linezolid. Antiepileptics were given in the form of oral levetiracetam along with mannitol to manage intracranial pressure and dexamethasone to control cerebral oedema.

The patient responded to treatment, regained consciousness and recovered from her fever. She was ambulatory and was moving all four limbs at the time of discharge, but was discharged early against medical advice due to financial constraints.

Brain abscesses frequently occur due to the haematogenous spread of septic microemboli from other sources of infection in the body and can also occur by the spread of infection from a contiguous focus of infection [2]. The most common causes of brain abscesses include; spread from a contiguous focus 25 to 50% of the time (ear/mastoid (40-63.3%), sinuses (15%), oral cavity (15%), meninges etc.), hematogenous spread 20 to 35% of cases, and by direct traumatic and intraoperative inoculation [1, 6].

Multiple brain abscesses are usually the result of metastatic spread from remote primary foci and single abscesses commonly occur by extension from adjacent infected foci, according to independent studies by Le Moal et al and Bakshi et al. [3, 4]. This case presented with a single deep right frontal lobe abscess, which points towards the presence of a contiguous focus/foci. However, no such infective focus could be revealed on imaging.

Even though the neuroimaging is not suggestive of haematogenous spread, the patient could have developed the abscess from this route as she was found to have cardiac anomalies including a patent foramen ovale. Kastenbauer et al. suggest several such potential mechanisms of spread that include expansion of an adjacent focus, haematogenous spread from the venous circulation like in right to left shunting of blood or in pulmonary arteriovenous malformations (fistulae) and direct traumatic spread [5]. However, a large number of brain abscesses are designated cryptogenic and are attributed to low-level bacteraemia due to asymptomatic dental infections due to the lack of any other explainable focus of infection.

This case revealed no detectable right to left shunting on TEE and a normal pulmonary vasculature on pulmonary angiography, suggesting no overt cardiac cause of the spread of infection. Nonetheless, there remains the possibility of transient reversal of shunting at the PFO causing a right to left shunt and enabling venous blood to bypass the pulmonary filter. Treatment options in such cases can be conservative or surgical; conservative treatment alone is usually given if ICP is not raised, especially if the abscess is small (<3 cm) [6].

Recommended conservative treatment includes a third generation cephalosporin, metronidazole and vancomycin [6]. This patient also received similar treatment, she was administered meropenem-sulbactam, metronidazole and linezolid to provide similar antibacterial coverage. The mainstay of surgical treatment is stereotactic needle aspiration of the brain abscess in cases of a deep-seated abscess. In cases of a more superficial abscess, excision may be considered.

A brain abscess is known to occur via seeding from many different foci, but in this case, no known foci could be found and implicated even with the presence of a known risk factor like patent foramen ovale. A PFO with left to right shunt with normal pulmonary vasculature may also possibly be associated with brain abscess. According to our review of literature, many studies and reports suggest the definitive treatment of choice as repair of PFO rather than lifelong anticoagulant therapy, but in this case, the same cannot be recommended as there is no direct evidence of any right to left shunting along with relatively normal cardiac function, even though the patient presents with a history of hypoxia and cyanosis.