Pleomorphic Adenoma of the Cheek: Case Report and Literature Review

A 56-year-old man, with good general health, was addressed by his own physician to our ENT and cervico-facial surgery department with a chief complaint of a mass in the right check. The mass has been progressively growing over the last 15 years, and has become increasingly troublesome in the last 3 months. MRI imaging suggested a vascular malformation. Patient underwent an “en-bloc” surgical excision of the mass, which revealed a pleomorphic adenoma. Pleomorphic adenomas are benin neoplasms composed of mesenchimal and epithelial components. They most frequently occur in the major salivary glands. Ectopic localisations are very rare. Here we report a case of an ectopic pleomorphic adenoma in the subcutaneous layer of the cheek and a literature review.

A 56-year-old healthy male was addressed to our ENT and cervicofacial department by his own physician following the progressive swelling of his right cheek since 15 years, a swelling that started to be increasingly troublesome in the last 3 months. There was no notion of systemic fever, localized heat or any discharge from the mass. In the patient’s history, there was no history of similar lesions or of usual ENT risk factors. On clinical examination, we found a right jugal swelling and during bimanual palpation we found a mobile, roundish, painless and well circumscribed mass of the right cheek thickness. The size was 3 cm of diameter. The rest of the clinical examination was normal.

The patient presented for the first time for above complaint in our hospital. At first we suspected a benign lesion such as epidermal cyst, a vascular or a lymphatic malformation. To complete the clinical investigation we performed an MRI of the head. The images were assessed by an experienced radiologist in the ENT sphere and they evoked as primary hypothesis a benign vasculaire malformation (hemangioma) (Figure 1, Figure 2, Figure 3).

The patient underwent surgery under general anesthesia. The incision line was designed on the jugal mucosa, following a vertical line close to the lesion and at least 2 cm away from the labial commissure to avoid damaging the facial artery. The incision was mucosal in order to avoid postoperative scaring on the face. A mass was revealed in the submucosal layer. It was well defined from around normal soft tissues. Complete excision was successfully done and the surgical wound was closed with primary repair, carried out with an absorbable thread. Excised mass was 3 × 2 × 1 cm, firm, multilobulated and of rubbery consistency (Figure 4, Figure 5).

Histopathological examination revealed a pleomorphic adenoma which presents a roughly polylobulated, biphasic, epithelial/myoepithelial and stromal architecture. The stromal component is abundant and it shows a chrondromyxoid aspect in appearance. (Figure 6, Figure 7). 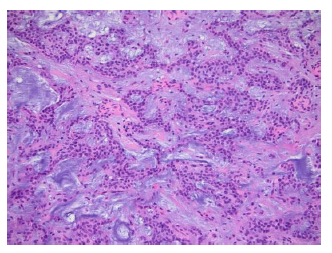 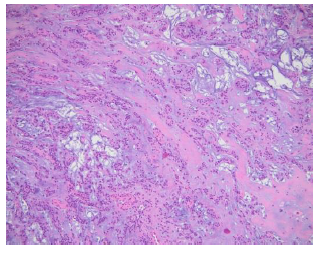 Until March 2020, a systematic search of the literature was performed interrogating PubMed search engine. The following research algorhythm was used pleomorphic adenoma cheek. A prefilled excel database was used to enter the records according to a defined exclusion criteria algorithm. Exclusion criteria applied hierarchically were: (I) not concerning a pleomorphic adenoma; (II) not concerning the cheek; (III) not in English; (IV) review articles; (V) no abstract available; (VI) non-extractable data; (VII) not human. Abstracts were manually screened by AA and LS separately, and subsequently matched for accuracy. Pertinent full-text articles were retrieved and analyzed, and data were extracted on the database. The flow chart of article selection is described following the Preferred Reporting Items for Systematic Reviews and Meta-Analyses (PRISMA) statement [3].

The initial database literature search yielded 104 records, including duplicates and non-pertinent articles. After manual screening of the abstracts, 1 record were excluded due to being a duplicate in our search. The remaining 103 articles were further assessed for eligibility. At that stage, n=23 records were not concerning pleomorphic adenoma; n=10 had a different localisation, n=7 were not in English, n=7 were reviews or editorials were excluded from data analysis; n=24 didn’t have an abstract available, n=5 had non-extractable data and n=1 was excluded because it was non human study concerning. A total of 26 [4-28] articles were identified and were included for data extraction. After exclusion, we found 79 patients including 18 females, 11 men and 50 were not available. The mean age was 39,04 ± 18,3 years old years old. The principal symptom was the cheek swelling which was present in 73 patients (92,4%). We found 56 patients (70,8%) who presented an accessory parotid gland (APG) - related tumor and 23 patients (29,2%) who revelead a minor salivary gland (MSG)-related tumor.

In the clinical assessment 5 CT scan, 6 MRI and 9 US were performed. No imaging were performed in 6 patients and for 56 patient this information was not available. Concerning the treatment, 77 (97,46%) patients received a surgical full resection, 1 (1,26%) patient was observed and about 1 patient the treatment was not available. The outcomes were satisfactory in 74 patients (93,67%) with total mass resection in 73 patients who had a surgical resection and 1 patient who was observed. Concerning 5 patients this data is not available. Only 2 patients (2,53%) presented a recurrence as a late complication.

PA is the most common benign salivary gland neoplasm and it is also known as benign mixed tumor. It accounts for 60%-70% of all parotid neoplasias, 40%-60% of all submandibular neoplasias, and 40%-70% of minor salivary gland neoplasias [29, 30]. The most part of minor salivary glands are present in the oral cavity, spread between hard palate, buccal mucosa, and lips. Other sites are floor of the mouth, inferior surface of the tongue, palatoglossal folds, and tonsillar region. The prevalence is in women between fourth and sixth decade of age , male to female ratio varying from 1:1.4 to 1:1 [31]. The majority of intraoral mixed tumors have a mean size less than 3.0 cm [25]. A retrospective Mexican study showed that in minor salivary gland tumors, 64.2% are benign neoplasms and only 35.8% were malignant [32]. Usually the patient presents a solitary and slow growing firm mass. Small tumors typically form smooth, mobile, firm mass but larger tumors tend to become a multi lobular lump and may attenuate the overlying skin or mucosa [30].

In our case, an ectopic pleomorphic adenoma appeared as a painless, mobile, roundish, and well circumscribed mass of the right cheek thickness, it showed a clinical presentation similar to benign soft tissue tumors. These findings of the case are in accordance with published studies [13, 33]. The differential diagnosis of PA cheek includes buccal abscess, dermoid cyst, sebaceous cyst, neurofibroma, lipoma, mucoepidermoid carcinoma and polymorphous low grade adenocarcinoma [34]. The size, extent of lesions and the bone involvement can be assessed by imaging like CT scan, MRI and ultrasonography which are useful tools during the pre operative phase [35]. Incisional biopsy of PA is contraindicated because can predispose to a recurrence. The preferred diagnostic modality is Fine needle aspiration cytology. PA ectopically exists even in the soft tissue of the neck, lymphonodes, tongue, mandible, hypophysis, mastoid bone, thyroid, parathyroid, subcutaneous layer of the nose, and skin of the external auditory canal [2].

According to Willis and collegues, there are three hypotheses to explain this kind of heterotopias: abnormal differentiation of the local tissues (heteroplasia), abnormal persistence and development of vestigial structures andc dislocation of portion of a deficient rudiment during mass movement and development [36]. It can happen due to metaplasia, neoplastic degeneration of ectopic salivary gland tissue or to the implantation after surgical excision of the salivary gland tumor [37]. The 5% of PA’s cases can present a malignant transformation into carcinoma ex pleomorphic adenoma. Radiotherapy is not indicated as these carcinomas are usually radioresistant. An excellent prognosis was found (95%) after complete and wide excision [2]. PA can relapse in case of scattering, partial and incomplete excision or enucleation, any distant metastasis was discovered. In the literature a recurrence rate of 2-44% has been reported. The gold standard of treatment for PA is wide local surgical resection with good safety margins and follows-up for at least 3-4 years [30]. So an ectopic appearance can cause a diagnostic dilemma for surgeons and a pathological confirmation is crucial. PA is a benign tumor that mainly occurs in the salivary gland but as in this case, given the localization in the facial region an histopathological work-up is crucial inorder to exclude other differential diagnosis [5]. Three histological subtypes were found, myxoid with an high rate of stroma (80%), cellular with myoepithelial cells predominating and mixed which is the classic form.

As already mentioned above, the gold standard treatment is complete surgical resection or eventually a “wait and see” strategy can be adopted. All literature is based on case reports and small size studies which present an high level of heterogeneity in the data reported.

We hereby declare no conflict of interest. This article has no funding. All authors approved of the final manuscript as submitted. Patient’s consent was obtained for this publication. This article was approved by the board institution committee of ethics. The availability of data and material was documented.

Not available for this case