Idiopathic onset of portal vein thrombosis (PVT) and/or superior mesenteric vein thrombosis (SMVT) in young adults could be associated with congenital thrombophilia, resulting from mutations in the genes encoding antithrombin, protein C, or protein S. This report describes a 39-year-old man who developed symptoms of cholangitis and was incidentally found to have PVT and SMVT with cavernous transformation. The patient was found to have protein C deficiency (activity: 42–53%, antigen: 46%). Gene sequencing revealed a heterozygous mutation at exon 8 c.793C>T (p. Leu265Phe). The history of this patient suggested that thrombosis in his splanchnic venous system developed due to alcoholism plus congenital protein C deficiency. The patient has been managed with complete abstinence from alcohol and treatment with oral rivaroxaban.

Portal vein thrombosis (PVT) in the splanchnic venous system may affect blood flow in the hepatic portal vein and can lead to portal hypertension [1]. Several conditions can lead to PVT, including various infections, pancreatitis, malignancies, and coagulation disorders [2]. Hepatic cirrhosis have also been associated with increased risk of venous thromboembolism, including PVT [3, 4]. Thrombosis in the extrahepatic portal vein system occurs mostly in patients with recurrent acute or chronic alcoholic pancreatitis, with or without an antithrombin, protein C, or protein S deficiency [5, 6]. Moreover, thrombophilia, whether acquired or congenital, has been linked to the development of splanchnic vein thromboses, such as PVT and/or superior mesenteric vein thrombosis (SMVT) [7-10]. Although PVT can lead to portal hypertension, the latter may be alleviated in the absence of liver disease/cirrhosis or with cavernous transformation of the portal vein, also called portal cavernoma, which results from the formation of periportal or intrahepatic venous collaterals [11]. Cholangiopathy in patients with portal cavernoma may be associated with biliary tract abnormalities, due to longstanding thrombosis of the main portal vein [12, 13]. This report describes a young adult man diagnosed with cholangitis and incidentally found on abdominal computed tomography (CT) to have PVT/SMVT with portal cavernoma. Further examination showed that he had a congenital protein C deficiency resulting from a sequence mutation in the gene encoding protein C.

A 39-year old man, 175 cm in height and 62.6 kg in weight, was referred to our hospital with abdominal pain lasting for a week. Over the previous 20 years, he had consumed three 350 mL bottles of beer every night and smoked about 10 cigarettes per day. His medical history included appendicitis at age 19 years, but he had been doing well until a year before presentation. During the previous year, he had experienced intermittent abdominal and back pains. He had never been diagnosed with any malignancies or known coagulation disorders and had not taken any medications affecting coagulation parameters. None of the members of his family had experienced thromboembolic events.

On admission, he was alert, with a blood pressure of 113/70 mmHg, a heart rate of 72/min, a respiration rate of 18/min, and an SpO2 of 99% (room air). Laboratory data are summarized in Table 1. He was found to be afebrile (36.9°C) with a high serum C-reactive protein (CRP) concentration (20.3 mg/dL; reference <0.29 mg/dL) but he was not polycythemic or dyslipidemic. He was negative for tumor markers, hepatitis B, and hepatitis C. His hepatic and renal functions were within normal ranges, with a normal serum total bilirubin concentration (1.21 mg/dL; reference: 0.3–1.3 mg/dL). However, his serum amylase (144 U/L; reference: 46–133 U/L) and lipase (75 U/L; reference: 17– 57 U/L) concentrations were slightly elevated. Abdominal ultrasound showed a normal liver; an enlarged gall bladder (short diameter: 32 mm), with a thickened wall containing biliary sludge; and mild splenomegaly. Abdominal computed tomography (CT) showed elevated fat concentrations around the head of the pancreas as well as the portal vein and superior mesenteric vein (SMV). The portal vein trunk and SMV were occluded by thrombi, and collaterals were present (Figure 1). Acute pancreatitis was ruled out, and the patient was diagnosed with cholangitis in association with the PVT and SMVT along with cavernous transformation. Esophago-gastroduodenoscopy showed esophageal varices (Cb, F2, Ls, Rc-, Lg-, telangiectasia+). After admission, the patient was treated with antibiotics (SBT/ABPC), intravenous heparin, and omeprazole. As shown in Table 1, blood tests on factors associated with coagulation/fibrinolysis and thrombophilia showed high plasma FDP (28.5 µg/mL; reference: <5 µg/mL) and D-dimer (10.1 µg/mL; reference: <1.0 µg/mL) concentrations. Protein C activity (42–53%; reference: 70–100%) and antigen (46%; reference: 70–150%) were below normal. Sequencing of the protein C gene revealed a heterozygous mutation at exon 8 c.793C>T (p. Leu265Phe); this mutation was previously reported [9]. 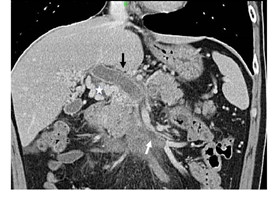 Symptoms of cholangitis subsided following treatment as above mentioned. Because of the lack of symptoms of significant portal hypertension and PVT/SMVT collaterals had already been established at the time of diagnosis, no further treatments were administered. The patient was discharged and has carefully been followed up, including treatment with oral rivaroxaban (15 mg/day) for the prophylaxis of further episodes of thromboembolism such as deep vein thrombosis and pulmonary embolism.

Venous thromboembolism is usually caused by various pathological conditions, including infections, malignancies, and coagulation disorders [2]. In addition, it may be caused by events, such as pregnancy, orthopedic surgery, and trauma [14]. Thrombosis involving the splanchnic veins is a frequent complication of acute pancreatitis. Decreased levels of the thrombophilic factors such as antithrombin, protein C, and protein S also play a role in the development of PVT/SMVT, either as an acquired (no gene mutations) or congenital (gene mutations) condition [6, 9, 10]. Deficiencies in protein C, protein S, and antithrombin have been detected in 23.8%, 33.3%, and 31.0%, respectively, of patients with acute pancreatitis [6]. Acquired protein C or protein S deficiencies may be caused by abnormalities in cytokine pathways. These deficiencies in patients with acute pancreatitis were assumed to be due to impairments in hepatic synthesis or consumption coagulopathy secondary to diffuse microvascular thrombi [6, 15]. By contrast, congenital deficiencies are due to heterozygous or compound heterozygous/homozygous mutations in the thrombophilic genes [9, 10]. Mutations in the genes encoding antithrombin, protein C, or protein S have been detected in about 27% of Japanese patients with PVT or SMVT [10]. The protein C gene mutations previously reported in these patients were c. 1218 G>A (p. Met408Ile), c.202G>A (p. Glu68Lys), c.1208delG (p. Gly423ValfsX82) and c.400G>T (p. Glu134X) [10], with an additional mutation in exon 8, c.793C>T (p. Leu265Phe) [9]. Among patients with PVT or SMVT, the rates of multiple thromboses (P < 0.001), idiopathic onset (P < 0.001), and non-malignancy (P < 0.01) were found to be significantly higher in those with than without thrombophilic gene mutations [14, 16].

The patient described in the present study had no apparent history of acute pancreatitis or chronic liver disease until experiencing intermittent abdominal pain during the year prior to admission. It was difficult to precisely determine the onset time of alcoholism-related acute/chronic pancreatitis that might have led to PVT/SMVT. During his current episode of cholangitis, he was found to have protein C deficiency resulting from a congenital mutation. This gene mutation may have acted as a thrombophilic predisposition to the development of PVT/SMVT associated with alcoholism. When the patient was referred to us with cholangitis, he already had presented with complete PVT and SMVT with cavernous transformation. Regarding the correlation between acute cholecystitis and PVT, two patterns have been described; in the first, PVT occurs following acute cholecystitis [17], and in the second, portal cavernoma cholangiopathy (PCC) develops after PVT [12, 13]. Our patient was thought to belong to the latter. Signs of PCC are said to include extrinsic indentation of the bile ducts, bile duct stricture and/or wall thickening, angulation and displacement of the extrahepatic bile duct, cholelithiasis, choledocholithiasis, and hepatolithiasis [12].

Treatment of PVT/SMVT includes anticoagulants, thrombolysis, insertion of shunts, bypass surgery, and liver transplantation. PVT was reported to be completely recanalized by oral anticoagulant therapy following low molecular weight heparin [18]. Our patient with PVT/SMVT and PCC received a short course of intravenous heparin alone and did not receive a prolonged course of anticoagulants during his stay in the hospital. However, thereafter, he has been treated with DOAC to prevent future thrombotic events. Because PCC is a slowly progressing disease and symptomatic PCC may represent a late stage in its natural history [12], our patient should also be carefully monitored for recurrent cholangiopathic events.