Background: The use of novel agents such as checkpoint inhibitors and the combination with targeted therapies has been increasing exponentially in the last years. Because of this the toxicity profile has been changed and uncommon syndromes are more frequent nowadays. PRES is a rare syndrome that causes neurological acute symptoms such as bradypsychia, seizure and even irreversible blindness if treatment is not initiated soon enough. It has been related to multiple diseases and conditions including with chemotherapy drug combinations and with the use of new oncological drugs. The incidence will probably increase in the net years, so we should describe these cases and develop clinical guidelines for the diagnosis and management of PRES.

Case Presentation: Here we present a 64-year-old woman with a stage IV adenocarcinoma of the lung that developed PRES during treatment with a combination of ramucirumab, a monoclonal antibody against vascular endothelial growth factor 2 (VEGFR2), and durvalumab, an antagonist of programmed death-ligand 1 (PD-L1). She developed the syndrome with complete remission of symptoms after two weeks, requiring an adjustment of antihypertensive medications.

Conclusions: The clinical importance of this case lies in the fact that despite its low incidence, we should be aware of these potential toxicities with the increasing use of novel agents in different combinatorial strategies, mainly in patients with other comorbidities. An early diagnosis is crucial since the prognosis depends upon it, decreasing the risk of permanent neurological damage and even death.

Posterior reversible encephalopathy syndrome (PRES) is a rare clinicoradiological condition that involves the appearance of acute neurological symptoms compatible with specific neuroimaging findings related to the appearance of vasogenic edema in the posterior cerebral region triggered by multiple causes. It has been described in relation to other medical pathologies [1] with an increasing incidence in our environment because of the novel oncological treatments and the increase in patients with long survival. Although the exact physiopathology of the syndrome is uncertain, there are to main theories [2-4]. The most commonly held theory postulates that acute hypertension exceeding the autoregulatory capacity of the cerebral vasculature leads to hyperperfusion, which in turn causes a breakdown of the blood?brain barrier, allowing the formation of vasogenic edema. On the other hand an alternative theory posits that vasoconstriction producing hypoperfusion could be responsible for the development of PRES [2].

A 64-year-old woman with no prior history of hypertension or other relevant medical history was diagnosed in November 2015 with stage IV lung adenocarcinoma (cT1a N3 M1) without EGFR, ALK or ROS1 alterations and PD-L1 expression of 5% in tumor cells. She presented with axillary lymph nodes and chest wall metastatic spread and received first line treatment with cisplatin-pemetrexed for 6 cycles achieving partial response followed by pemetrexed maintenance every 3 weeks. In July 2016, she presented progression of the chest wall lesion, which was treated with local palliative radiotherapy and further progression of the primary lung tumor and axillary nodes. She was enrolled in a phase 1 clinical trial testing the safety and efficacy of the combination of durvalumab (a PD-L1 antibody) and ramucirumab (an anti-VEGFR2 antibody) administered every 3 weeks [3]. She achieved partial response that was maintained for 16 months. During this period, she experienced with grade 1 skin rash and grade 2 adrenal insufficiency deemed related to durvalumab that required replacement therapy with hydrocortisone.

On February 2nd, 2018, the patient presented to the Emergency Room with a three-day history of vomiting and diarrhea, accompanied by abdominal pain, intense headache and fatigue. Physical exam revealed a fever of 38,5ºC and hypotension 87/55 mmHg. A nasal smear was obtained with a positive result for AH3 influenza virus. She was diagnosed with adrenal crisis due to an increase in corticosteroid requirements in metabolic stress during an infection. The patient was treated with oseltamivir and high dose corticosteroids with resolution of the fever and hypotension within 48 hours of admission. On the sixth day of admission, she started with progressive increase in blood pressure that was maintained for 24 hours. That night she presented a hypertensive crisis of 210/110 mmHg accompanied by a bilateral occipital headache. The patient described phosphenes and one hour later presented a progressive bilateral amaurosis. Her Glasgow Coma Scale was 15/15 but exhibited with bradypsychia with no alterations in comprehension or language emission, abolished menace reflex bilaterally, dextroversion of the eyes and cervical rotation to the right. Extraocular muscles responded to verbal orders, with no alterations of cranial nerves. Strength was conserved in the four extremities and there was no sensory loss. The symptoms rapidly evolved to a generalized tonic-clonic seizure, that resolved with 5 milligrams of intravenous diazepam.

The Computerized Tomography (CT) scan showed bilateral parieto-occipital hypodense lesions, affecting the subcortical region of the parietal lobes and the corticosubcortical region of both occipital lobes. Magnetic Resonance Imaging (MRI) of the brain showed bilateral diffuse alterations in the occipital area that were hypointense on T1, and hyperintense on T2 and FLAIR (Figure 1 top), with no restriction of diffusion and no contrast enhancement. Findings were consistent with PRES. No hemorrhage or signs of tumor involvement were identified. Under the diagnosis of PRES, treatment with intravenous urapidil and levetiracetam was initiated with seizure control and progressive visual improvement. Good blood pressure control was achieved and she required the use of four drugs after interruption of urapidil for complete blood pressure control (enalapril, amlodipine, labetolol, doxazosine) with full recovery within two weeks and complete resolution of the amaurosis. A second MRI was performed 2 weeks later (Figure 1 bottom) with resolution of the lesions previously described. 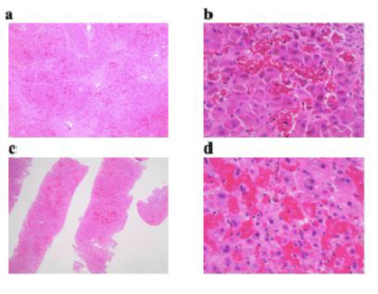 The number of immunotherapy combinations has exponentially grown in the last years. As a consequence, the range of adverse events has equally increased and different safety profiles of these combos can lead to unexpected consequences. Although serious side effects of these drugs are uncommon, they can be challenging and prompt diagnosis and treatment can alter the evolution and long-term consequences. In this case report, we describe a case of PRES in a patient treated with the combination of durvalumab with ramucirumab. Although the etiology of PRES is not clear, it is described that in hypertensive patients, a vascular remodeling is produced which helps maintain the same permeability at higher blood pressures, but if the hypertension is produced abruptly it can trigger this syndrome [2, 4]. This can also occur with the use of cytotoxic drugs [5, 6] with direct damage of the endothelium causing disruption of blood vessels and edema of brain parenchyma (it can also take place in patients without hypertension and at therapeutic drug levels).

It is important to emphasize that PRES has been described in a variety of medical pathologies such as preeclampsia, nephropathies (hyperuricemia, hypomagnesemia, metabolic alterations) and increasingly described in patients treated with traditional chemotherapy [5, 6], tyrosine kinase inhibitors [7, 8] and immunotherapy [9]. Because of this, it is foreseeable to see an increase in incidence in the coming years. In this particular case, it is difficult to determine the causality. It has been described (Table 1), there are many causes related to PRES. Our patient started with a influenza A infection that has been also described as a cause of endothelial dysfunction leading to PRES [10, 11]. PRES is also related with severe infections, sepsis and shock due to the vascular damage [12, 13] and blood pressure fluctuations [14]. Our patient presented an adrenal crisis triggered by the influenza infection, with blood pressure rising rapidly after treatment with an increase of her regular dose of hydrocortisone and thus increasing the risk of a hypertensive crisis [15].

The typical clinical manifestations of PRES are present in this case with visual alterations, nausea, convulsions, and finally symptoms associated with occipital damage and acute bilateral amaurosis. In general, when promptly recognized and treated, this syndrome has a good prognosis and symptoms can be completely reversed. It should be highlighted the importance of neuroimaging especially in ruling out reversible ischemia in the first few hours because reversibility and mortality (which vary in 3-6% of cases based on different series) [16] depends on early control of risk factors. The main determinant factor is the administration of intravenous antihypertensive medication. As we reflect before there were many causes related to blood pressure fluctuation in this case. It is likely that high dose corticosteroids and intravenous fluid therapy contributed to the initial hypertensive state. In addition, due to the long half-life of durvalumab (17 days) and ramucirumab (14 days) they also were likely to play a role in the event, in particular when this syndrome has been described in association to both ramucirumab [17] and other antiangiogenic drugs and immunotherapy [3, 18, 19]. Due to the complexity of this particular patient’s case, it is impossible to state which of these factors was the initial trigger, but we should consider they all may have contributed to the presentation of PRES.

PRES is a life-threatening situation that requires a quick diagnosis, but with appropriate treatment can resolve with no sequels. The use of new combinations with immunotherapy and particularly with antiangiogenic agents could increase this risk. There are no clear recommendations for managing patients after having suffered PRES. In our case following the study protocol the patient was taken off the study and started another therapy for her cancer. It is unknown whether there are benefits to continue treatment after reversal of symptoms. It would be essential to develop clinical guidelines for the diagnosis and correct management of these cases.

There are no conflicts of interest to declare. We obtained informed consent from the patient and from the sponsor of the clinical trial, NCT02572687, to publish information on the clinical case.