Prevalence of Human Brucellosis in the Southern Zone of Sidi-Bel-Abbes, Algeria

Brucellosis is an anthropozoonosis caused by a bacterium of the genus brucella. The aim of this study was to study the seroprevalence of brucellosis in high risk individuals. The Wright technique was used (Reagent: Brucella abortus, Antigen: Somatic, Reference: 1205091). Our study focused on the population of the southern region of Sidi-Bel-Abbès and showing clinical signs of brucellosis between February 2010 and June 2012 and whose "Wright" test was positive. 111 cases of human brucellosis have been identified; 59.45% male against 40.54% female. 50.45% reported no contact with animals, however contact with goats, cattle and sheep was 13.51%, 6.30% and 0.90%, respectively. Regarding the consumption of raw milk it was of the order of 53.15% against 17.11% for curd and 0.90% for under cooked meat. The 30-40 age group was the most common. The results on the follow-up of a previous treatment indicate that 2.70% followed a previous treatment against 97.29% that they had no treatment to follow. Brucellosis is an infection that is evolving in our region (Sidi-Bel-Abbès) it requires more monitoring.

Also called Malta fever or undulating fever, brucellosis is due to Brucella, a Gram negative aerobic and asporous coccobacillus bacterium with an intracellular development, its declaration is obligatory within humans and animals [1]. In epidemiology, it is an anthropozoonosis that rages in the Mediterranean region in a way that makes past oral areas in Algeria experiencing real epidemics. Other than being a health problem, brucellosis also causes serious socio-economic problems. Consequently, the inability to work among illness duration and high costs of treatment may constitute heavy burdens. This disease is usually transmitted by infected animals to humans through direct contact or by consumption of infected raw milk with Brucella [2]. In 2007, a rate of 23.14 cases per 100 000 inhabitants was estimated in the absence of systematic screening for people at risk in Algeria [3].

The aim of this study is to investigate the seroprevalence of brucellosis in individuals belonging to suspected high-risk group, and selected from people residing in the southern region of Sidi BelAbbes in addition of suspected patients received in public health establishments near the town of Telagh.

2.1 Study area description
The daďra of Telagh is located fifty kilometers in the south of Sidi Bel Abbes, Algeria. This city is also situated in the center of a large agro-pastoral region and constitutes an important market of agricultural, livestock and forestry productions for surrounding daďras and communes.

2.2 Data and blood samples collection
2.2.1 Data collection: Our study focused on a population residing in the southern region of Sidi-Bel-Abbes and presenting similar clinical signs evocative of brucellosis (undulant fever, sweat, chills, aches, vertigo) between February 2010 and June 2012 and whose Wright's test was positive. 111 cases of human brucellosis have been confirmed in this region. Data were collected from patients using a standardized questionnaire. The questionnaire collected information about socio-demographic, clinical symptoms, risk exposures and cutaneous-mucosal contact. Two main modes of transmission were also explored; contact with animals susceptible to be infected, and consumption of dairy products or consumption of uncooked meat. The data was gathered, classified and analysed using SPSS 15 software.

2.2.3 Wright brucellosis serodiagnosis method: A case is defined as a person with clinical signs of brucellosis associated with a positive serology. The Wright serodiagnostic technique was used (Reagent: Brucella abortus, Antigen: Somatic, Reference: 1205091). The WRIGHT serodiagnosis is an agglutination reaction using as an antigen a suspension of Brucella cells killed with formaldehyde at 4 ? and heat. (Brucella Wright: Brucella antigen for Wright serodiagnosis). Brucellic antigen kit was used on patients’ serum after centrifugation according to the manufacturer's protocol. This test is qualitative for antibodies detection. If a titre greater than or equal to 1/80 (120 U.I/ml) indicates active brucellosis, a lower titre (1/40 and even 1/20) has a high presumptive value (Bio Rad, Brucella Wright 63241). 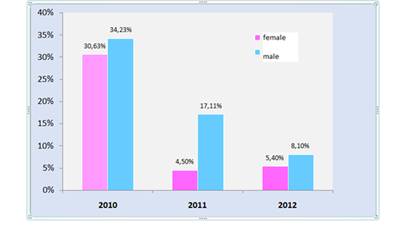 Figure 1: Frequency of human Brucellosis per year according to patients’ gender. 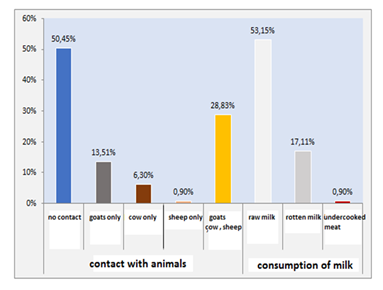 Figure 2: Frequency of cutaneo-mucosal contact and product of risk consummation. 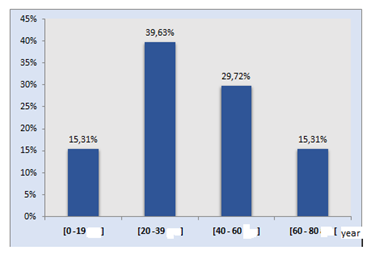 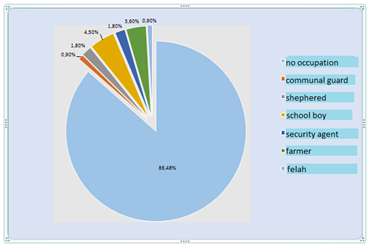 Figure 4: Number of cases of human Brucellosis according to professional patients. 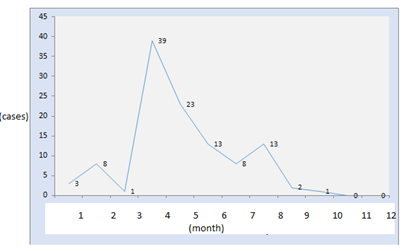 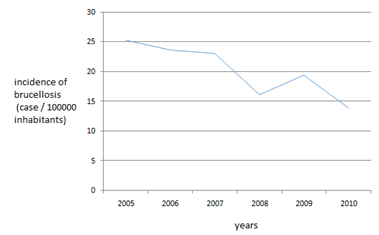 Figure 6: Annual incidence of human Brucellosis between 2006 and 2010.

Tube agglutination technique or Wright's seroagglutination (SAW), was the first serological technique described, and remains the reference advocated by WHO because of its standardization. As a quantitative test, it allows serological diagnosis of acute forms of brucellosis, in early phases between the tenth and the twelfth day with a titre higher than 80 [1], but it becomes rapidly negative as it detects IgM. It may benegative in sub-acute brucellosis and almost always in chronic brucellosis, what makes it not recommended for epidemiological investigations or for the diagnosis of chronic brucellosis. Which requires Other developed serological techniques use including slide agglutination technique or buffered antigen (EAT) testing (including the Rose Bengal test), complement fixation and Elisa testing [11].

A titre greater than or equal to 1/80 (120 U.I / ml) indicates active brucellosis, for a lower titre (1/40 and even 1/20) has a high presumptive value (Bio Rad, Brucella Wright 63241), it must be followed by a second serodiagnosis a few days later in case of suspicion. It can also be negative for a period of 10 to 15 days as an early stage of the disease, and this phase can be longer in young children. It has also been recorded that few rare patients never have manifested agglutinating antibodies. It has been also proved that serodiagnosis can be positive to 1/20 (30 IU/ml), 1/40 (60 IU/ml) for people who never showed any clinical manifestations, and who have been living in highly endemic environments. In such patients’ or in the case of old brucellosis, the level of agglutinating antibodies may increase transientl accompanied by infections with Yersinia enterocolitica, Francisella tularensis, or cholera vaccination (non-specific reactions due to an antigenic community). A second repeat for this test is recommended following any doubtful results. Furthermore, blood cultures have a low sensitivity and require several weeks of incubation, which may recall the importance of serological tests [12].

Statistical study of gender showed a higher percentage ofmale patients with 59.45% are male (39.34 ± 17.37 years) against 40.54% that were female (35.4 ± 19.83 years old), which is in agreement with the study of Agasthya and co 2007 [13] that reported a higher seropositivity in men (98.96%) than women (1.03%), but was in contrast to Kapoor and co 1985 [14] works who showed higher seroprevalence in women compared to men. In countries where food hygiene prevents transmission of brucellosis, the disease is largely professional and the majority of cases are men between 20 and 45 years of age, whilepopulations where food transmission of brucellosis is common, like in nomadic societies, children presents a large proportion of acute cases [15]. Young EJ [16] and Taylor JP and co 1989 studies reported that brucellosis has traditionally affected middle-aged youth, which is also conform with our results showing that two-thirds of the cases confirmed in this study are within the age group of 30-40 years with extremes ranging from 02 to 86 years. Infection within infants (02 years) is due either to the use of raw milk for the feeding of babies, or by the milk of infected mothers infected with brucellosis.

In the other hand, 50.45% of patients reported that they had no contact with any animal species, against 13.51%, 6.30% and 0.90%, that had contact with goats, cattle and sheep respectively. While consumption of raw milk was at the order of 53.15% against 17.11% for curd, the consumption of under cooked meat was with a percentage of 0.90%. Our results are similar to those of Rahal. K and co 2009 and Calveta. F and co 2010 [17], which confirm that transmission of brucellosis to humans is mainly observed in people after consuming raw milk and in some cases by direct contact with infected animals, especially during calving. Dairy species females, cows, goats, ewes, excrete the Brucella sp cellsin their milk. In addition, the consumption of unpasteurized raw milk, cheese, or cream is also a mode of contamination in humans. Muscles contamination is exceptional, however the consumed undercookedvariety meat can also host Brucella sp cells. Actually, rural populations live in close contact with their animals and generally prefer to consume raw or slightly acidified milk and milk products. These aliments are the source of infection in about 83% of cases in Kuwait [18] against 85% of cases in Algeria [19]. Besides this, low levels of food contamination are sufficient: the minimum infective dose in humans is estimated to be between 10 and 100 cells of Brucellla sp [20].

Our results have also shown that contamination type is different from those found in of El Sherbini and Co 2007 [20], and Fadeel and Co 2006 [20] works, which has reported that transmission is mainly mucocutaneous in Egypt, and seroprevalence of brucellosis has been associated with study locality and sheep breeding. While in Eritrea, among professionals exposed, a survey showed the influence of the breeding system, with a higher seroprevalence in dairy farming, attributed to a greater handling of animals (especially during milking), and at a higher animal density compared to a nomadic agropastoral system [21]. This series of studies shows that relative importance of risk factors varies from one region to another depending on cultural habits [22]: consumption of raw milk in Iraq, intervention during lambing in Eritrea, breeding without buildings in the Peloponnese [23], treats in peri-urban dairy farming systems, etc. The maintenance of the epizootic and the contamination of the breeders and vets are favored by the lack of water sources which limits the use for cleaning hands during the milking or the lambings. Also, markets, grazing areas and uncontrolled immigrationof herds across borders are a source of disease transmission [24]. In our study, 86.48% of the surveyed patients were reported as having no occupation, presented highest percentages of seroppositive results; followed by school children with 4.5%. This can be justified by being frequently contaminated due to the ingestion of raw milk or its fresh derivatives (cheese, curd) from infected animals, as a main route of contamination in both urban and rural areas [25]. Mucocutaneous contamination, is secondary due to direct contact in livestock, is more common in rural areas in professionaly exposed individuals. It is often cutaneous due to the presence of excoriations, even minimal, sometimes conjunctival and rarely by inhalation of infected dusts [25, 26]. We Also report that during the study period evolution of human brucellosis rateper month shows an increase in the period between March and May to decrease in June, which is in concordance with Lounes N. and Bouyoucef A 2008 works [27], which proved that brucellosis is more common during the late spring to early summer. During these months, birth rates in cattle are very high, leading to increased environmental contamination. It is also mentioned that availability of milk and dairy products, and the same seasonal distribution of brucellosis have been shown to have an influence in Dimitrov. Ts and co 2004 works [16].

In addition of being a health problem, brucellosis also causes socio-economic problems. As consequence, it extended incapacity to work during periods of illness. Furthermore, the costs for medical treatment (hospital, drugs) poses heavy impacts. In Algeria, taking into account only acute septicemia cases requires for it only an average of 7 days of hospitalization and 45 days of home care, it was found that the expenditure for each patient is equivalent to eight months of the minimum interprofessional salary [28].

Brucellosis is an infection that is evolving in our region (Sidi-Bel-Abbčs) with several modes of transmission that requires more monitoring, declaration of the disease and the establishment of a well-structured control program. Epidemiological surveys should be conducted regularly to monitor the seroprevalence of this zoonosis. The prevention of human brucellosis is easy and essentially requires, as for a majority of zoonotic agents, reasoned dietary practices, with a consumption of pasteurized dairy products and well cooked meat. It would also be useful to make the disease known to professionals so that necessary precautions for regular screening can be applied. Finally, the establishment of precautions, universally recognized, for high-risk populations should not be neglected.