Factor V Leiden (FVL) and prothrombin G20210A (PGM) mutations are the most frequent genetic risk factors involved in deep venous thrombosis in Caucasians. Being heterozygous for both seems to increase the risk of venous events but it is not well established if the association increases the risk of arterial thrombosis or other thrombotic events. We present a case of recurrent stroke caused by non-bacterial thrombotic endocarditis (NBTE) in a 34-year-old Caucasian man heterozygous for both FVL and PGM. His diagnosis of NBTE was confirmed with pathology in the absence of other causes of NBTE.

We describe a 34-year-old Caucasian man presenting for evaluation of recurrent stroke of indeterminate etiology.He had history of hypertension, hyperlipidemia, diabetes mellitus type 2, smoking, and obstructive sleep apnea. He was on testosterone replacement therapy since 2015. He denied personal or familial history of thrombotic events. One year prior to our evaluation, he woke up with severe headache, slurred speech, and balance difficulties. An MRI reported several ischemic strokes. He was found to be heterozygous for the Factor V Leiden (FVL) mutation. He was started on Apixaban 5 mg/12 hs for stroke prevention. He cut back on smoking and discontinued the testosterone replacement therapy.

He remained on Apixaban but had recurrent symptoms 6 months after the initial presentation including headache, slurred speech, peripheral vision loss and unsteadiness. A second MRI of the brain indicated 4 new ischemic strokes involving the right median cerebral artery territory, right cerebellar hemisphere, and left occipital lobe, suggesting a central embolic mechanism. MRA of the head and neck was unremarkable and negative for dissection, plaques, or vascular malformations. A transesophageal echocardiogram was reported normal and he was transitioned to Rivaroxaban 20 mg and aspirin 81 mg daily.

He presented to us for a second opinion regarding cryptogenic strokes. The physical exam was normal, with the exception of a mildly impaired tandem gait and hyperreflexia in the lower extremities. A workup for inherited or acquired thrombophilia resulted in normal levels of protein C, protein S, and antithrombin, no antiphospholipid antibodies or lupus anticoagulant. In addition to his heterozygosity for FVL, he was found to be heterozygous for the mutation in the prothrombin gene G20210A (PGM). He had no evidence of rheumatologic or autoimmune diseases, age appropriate cancer screening was negative. 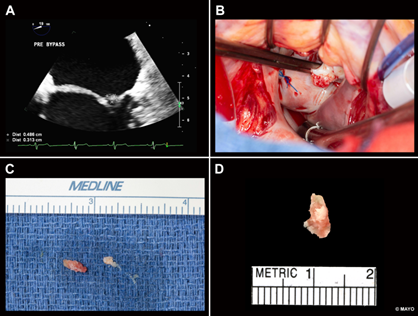 A transesophageal echocardiogram demonstrated a rounded mass measuring 5 mm × 4 mm, with small, associated mobile filaments, attached by a broad base to the left atrial side of the lateral P2 scallop of the mitral valve (Figure 1A). There was also a long, linear echodensity, which was originating from the left atrial appendage (LAA), and out past the Coumadin ridge to the left atrium. Blood cultures were negative for bacteria and fungus repeatedly. The differential diagnosis at that point included papillary fibroelastoma, myxoma, thrombus, and sarcoma. The latter was unconvincing considering the characteristics of the image in the MRI, and thrombus was thought to be unlikely due to the high velocities within the left atrial appendage. Given the history of multiple strokes despite anticoagulation, the cardiac mass was removed by open heart surgery (Figure 1B, 1C).

Surgical Pathology confirmed the presence of fibrin-rich thrombus without identifiable microorganisms (Figure 1D). A CT of the chest, abdomen and pelvis was not suggestive of malignancy. The linear echo density from the LAA was an avulsed congenital atrial band which is considered of no clinical consequence and unlikely related to the patients recurrent strokes.

This patient is heterozygous for the prothrombotic FVL and PGM combined, and was diagnosed with pathology confirmed nonbacterial thrombotic endocarditis (NBTE) on the mitral valve. NBTE is usually discovered at postmortem and is found in 1.2% of patients in autopsy series [1]. NBTE vegetations commonly involve the mitral and aortic valves; these lesions can affect both damaged and undamaged cardiac valves, and the chordae tendineae or the endocardium. Compared with the lesions in infective endocarditis, NBTE vegetations are more friable and prone to systemic embolization [2].

FVL and PGM mutations are the most common prothrombotic mutations in the Caucasian population, being present in 5% [3]and 1-3% [4] respectively. Being heterozygous for each of these mutations has shown to have approximately a 5-fold and 3-fold risk increase of venous thromboembolism (VTE) respectively compared to controls [5, 6]. Combined heterozygosity for FVL and PGM is a rare condition present in approximately in 1 in 1000 in the general population and 2.2 per 100 in patients with VTE [7]. Being a compound heterozygous (FVL + PGM) increases the thrombotic risk 20-fold [7].

Whether these mutations also increase the risk of arterial thrombosis is not well established. Although there is not an association between heterozygous FVL and arterial therombosis [8], a retrospective family cohort study showed an association with arterial events in double heterozygous and homozygous carriers [9]. When arterial events occur in a young person, inherited abnormalities of hemostasis seem to play a role, particularly when associated with smoking or estrogen use [7]. We are not aware of other reports of NBTE in patients with FVL and PGM combined in the absence of other causes of NBTE. De Paulis et al. [10] reported chronic thrombotic pannus and later acute thrombosis of a mechanical prosthetic valve while on anticoagulation in a patient with both FVL and PGM mutations, and in the absence of other underlying conditions, besides the acute use of tranexamic acid.

Our patient had a pathology proven diagnosis of NBTE, consisting of platelet rich thrombus. The instigating factor causing NBTE is not entirely known but involves endothelial cell injury in the setting of a hypercoagulable state. NBTE is most notably associated with malignancy, antiphospholipid syndrome, and SLE [12-14]. Our patient tested negative for antiphospholipid syndrome, and lupus, additionally there was no malignancy identified by screening, by CT of the chest, abdomen and pelvis, or during follow up. Although platelet-rich thrombus is more commonly associated with arterial events and both FVL and PGM are more commonly associated with venous events, we hypothesize that in the setting of being compound heterozygous in addition with smoking and testosterone supplementation may have created the ideal milieu for this event.

There is no proven therapy to treat NBTE, once diagnosed; treatment usually consists of systemic anticoagulation and treatment of the underlying condition. Addressing the patient’s underlying disease is the most effective management for NBTE. Surgical intervention may be necessary in select cases, especially those presenting with heart failure, acute valve rupture, or recurrent embolism. Our patient underwent surgery because of recurrent emboli despite anticoagulation, and uncertainty of the etiology. Although the NBTE lesions were removed, he will continue on lifelong anticoagulation due to his risk of recurrence of NBTE, stroke and venous thromboembolism[14]in the setting of compound heterozygocity.