Methods: This is a single-center, retrospective observational cohort study involving preterm infants who required endotracheal surfactant therapy at our hospital from January 2015 to January 2016. Incidence of pneumothorax, chronic lung disease (CLD), mortality, and the composite outcome of CLD and death were compared between the infants who received poractant alfa and beractant.

Results: Overall, 179 preterm infants received endotracheal surfactants. Of these, 70 (31%) and 109 (69%) received poractant alfa and beractant, respectively. The incidence of pneumothorax in infants treated with poractant alfa was significantly lower than those treated with beractant (0.00% vs. 6.42%, P = 0.031). Compared with beractant, poractant alfa significantly reduced the incidence of pneumothorax in very low birth weight (VLBW) infants (0.00% vs. 8.00%, P = 0.035), but not in non-VLBW infants (poractant alfa 0.00% vs. beractant 3.03%, P = 1.00). The rates of CLD, mortality, and composite outcomes of CLD and death were not different between the two groups.

Conclusions: Poractant alfa significantly reduced the rates of pneumothorax in preterm infants with respiratory distress syndrome. This reduction was more significant in VLBW than non-VLBW infants. However, mortality and morbidity were not different between these two groups.

Poractant alfa (CurosurfÒ, Chiesi Farmaceutici, Parma, Italy) and beractant (SurvantaÒ, Abbott Laboratories, Abbott Park, IL, USA) are animal-derived, protein-containing surfactants that are commonly used to treat RDS. Poractant alfa is extracted from minced porcine lung tissues, while beractant contains minced bovine lung extract with added synthetic lipids [4]. These surfactants differ in their chemical compositions. Although studies have compared the clinical outcomes of these animal-derived surfactants, their results remain equivocal. A retrospective cohort study by Ramanathan et al. demonstrated that a significant reduction of mortality was associated with poractant alfa usage [5]. However, this was challenged by a subsequent study by Trembath et al., where they reported a similar impact on mortality from the two surfactants [6].

On the other hand, a meta-analysis examining randomized controlled trials (RCT) on porcine and bovine surfactants showed a significant reduction in all-cause mortality in infants treated with poractant alfa [7]. To date, there is no conclusive evidence that supports the clinical superiority of one surfactant over the other. Nonetheless, the use of poractant alfa has been steadily increasing in the United States over the last two decades [8].

This is a single-center retrospective cohort study using the database from infants admitted to our tertiary hospital's neonatal intensive care unit from January 2015 to January 2016. The database was generated from de-identified information extracted from hospital electronic and paper records. This retrospective audit was approved by SingHealth Centralized Institutional Review Board (CIRB: 2016/2327) with an exemption for individual consent. We identified infants born with gestational age (GA) < 37 weeks who received either poractant alfa or beractant for management of RDS. Infants who received the first dose of surfactant in other units and subsequently transferred to our unit for further management were excluded from the study. Infants with major congenital anomalies, such as congenital diaphragmatic hernia or cyanotic heart disease, were also excluded.

All infants received endotracheal surfactant as a therapeutic intervention for RDS. Infants who required intubation during initial resuscitation received endotracheal surfactant within 30 min of life. For infants initially stabilized on continuous positive airway pressure (CPAP) at birth, intubation and surfactant administration were offered if they had FiO2 requirement > 40%, PaCO2 > 65 mmHg, or recurrent apnea consistent with progressive RDS. We used a higher dose regimen for poractant alfa, where it was initially administered at 200 mg/kg/dose for the first dose and repeated at 100 mg/kg/dose 12 hours apart, up to but not exceeding a total dose of 400 mg/kg [9, 10]. Beractant was administered at 100 mg/kg/dose for up to three doses at six-hour intervals [11]. Both surfactants were given endotracheally in two aliquots. After surfactant administration, a unified ventilation strategy to optimize ventilation settings for early weaning with a target tidal volume of four to six ml/kg whenever feasible. Infants were classified to have pneumothorax if there was radiographic evidence of air collection in pleural space at any time following initial surfactant therapy. Infants born at < 32 and ≥ 32 weeks gestation were classified to have CLD if they still received either supplemental oxygen or ventilatory support at 36 weeks postmenstrual age and 28 days of postnatal age, respectively [12]. Those who died before CLD evaluation were classified as not having CLD.

Descriptive statistics (frequency and percent) was reported for the demographic variables of subjects who received the two surfactants (poractant alfa and beractant). Maternal and infant parameters were compared with Chi square test. Clinical outcomes were compared between the two groups using Mann-Whitney U and Chi square test for continuous and categorical variables, respectively. All statistical analysis was performed using SAS version 9.4 for Windows (SAS Institute Cary, NC, USA). Statistical significance was set at P < 0.05.

A total of 187 preterm infants received either poractant alfa or beractant therapies during the study period. Of these, 179 were eligible for the study. Eight infants were excluded from our analysis because they had major congenital malformations or hydrops fetalis or received the first dose of surfactant elsewhere. Overall, 70 (39%) and 109 (61%) infants were treated with poractant alfa and beractant, respectively (Figure 1). 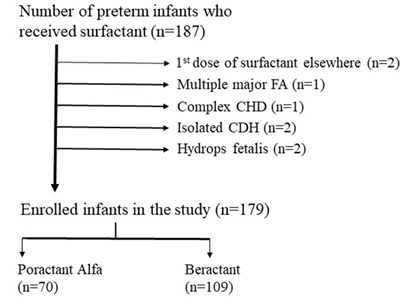 The study population’s baseline characteristics are shown in Table 1. Both groups have similar baseline characteristics, including maternal and infant parameters. There was a preference to use protectant alfa in smaller infants (median birth weight 1075g (IQR 754-1489)) over beractant (median birth weight 1116g (733-1623)). However, this difference did not reach statistical significance (P = 0.225).

Table 3: Incidence of pneumothorax in VLBW and non-VLBW infants.

Pneumothorax in neonates is associated with significant mortality and morbidity, especially in early preterm infants (gestational age <32 weeks) [13]. With the advent of surfactant therapy and improved ventilation strategies, the incidence of pneumothorax has decreased significantly over the last few decades [14]. Strategies to further reduce its occurrence will help to improve neonatal outcomes further.

We propose that differences in chemical compositions of the two surfactants could have contributed to the differences in the incidence of pneumothorax. When administered at their respective therapeutic doses, poractant alfa contains higher concentrations of both phospholipids and surfactant protein B (SP-B) than beractant [4, 5]. The ability of surfactant to reduce pulmonary surface tension relies on the formation of surface film at the lung air-liquid interface. Phospholipids, especially dipalmitoyldiphosphotidyl choline (DPPC), are the building blocks of this surface film. In contrast, the hydrophobic SP-B interacts with the lipids to promote the formation and adsorption of the surface film to the air-liquid interface [15]. Therefore, a higher concentration of bioactive macromolecules in poractant alfa may facilitate surface film formation and reduce pulmonary surface tension. This biochemical advantage also translates into better in vivo responses. To date, no animal studies have directly compared the in vivo responses between poractant alfa and beractant. Recently, Ricci et al. compared the pulmonary responses of poractant alfa and bovactant (Alveofact®, Lyomark Pharma, Oberhaching, Germany), another bovine-based surfactant, in RDS-induced preterm lambs and adult rabbits. Since bovactant has a lower phospholipid concentration than beractant, it was adjusted to reflect a similar amount of phospholipids of poractant alfa. Despite the dose adjustment, poractant alfa showed a more superior acute pulmonary response, as indicated by significantly higher lung gas volumes, more rapid and sustained recovery [16].

We found 11 randomized controlled trials (RCTs) in the literature that compared the effectiveness of poractant alfa (200 mg/kg) and beractant in neonates [7, 17]. Of these, eight reported pneumothorax as their study outcome (Didzar et al. [18]; Halahakoon et al. [19]; Karadag et al. [20]; Malloy et al. [21]; Ramanathan et al. [22]; Speer et al. [23]; Gharehbaghi et al. [24]; and Mussavi et al. [25]). None of these studies reported a significant difference in preventing pneumothorax occurrence from the two surfactants. However, most of these trials are limited by small sample size and non-vigorous study design [4, 7]. Singh et al. conducted a meta-analysis on these trials and demonstrated a trend favoring poractant alfa in pneumothorax prevention. However, the difference was not statistically significant (beractant vs. poractant alfa: typical risk reduction (RR) 1.24, 95% CI 0.71 to 2.17; typical risk difference (RD) 0.02, 95% CI 0.02 to 0.05) [7]. Trembath et al. analyzed a large cohort with simple logistic regression and random-effects models. They demonstrated a significant reduction of pneumothorax in infants treated with poractant alfa as compared with those treated with beractant (logistic regression: beractant vs. poractant alfa odds ratio (OR) 1.47, 95% CI 1.35 to 1.61; random-effects models: OR 1. 31, 95% CI 1.13 to 1.51) [6]. A recent systematic review by Tridente et al. also demonstrated a significant reduction of pneumothorax incidence associated with poractant alfa (200 mg/kg). However, compared with a pooled bovine surfactant rather than beractant alone (poractant alfa vs. bovine surfactants: RR 0.505, 95% CI 0.308 to 0.827) [17]. Overall, current evidence supports our finding that poractant alfa is more superior to beractant in lowering the incidence of pneumothorax. Various limitations in different RCT settings may have previously overlooked that poractant alfa can potentially prevent pneumothorax occurrence in the neonatal population.

Although our study demonstrated a significantly lower incidence of pneumothorax in infants treated with poractant alfa, it did not improve mortality. This contrasts with a study from Singh et al., where beractant was associated with a higher risk of mortality before discharge compared with poractant alfa (RR 1.44, 95% CI 1.04 to 2.00) [7]. Because our study is a retrospective observational cohort study, the subjects are not randomized. Although both VLBW and non-VLBW infants have compatible key baseline characteristics, we may not have accounted for all confounders from our non-randomized study. In addition, more infants received beractant therapy in our center. This unequal distribution is likely because poractant alfa was a relatively new surfactant in our center during the study period. As the sample size becomes unequal, its statistical power also diminishes [27]. Our small number of infants also limits the subgroup analysis in non-VLBW infants. We also observed that infants who received poractant alfa were smaller, reflecting a possible clinician preference towards poractant alfa in smaller infants in our center, possibly due to smaller volume.

In summary, our study suggests that poractant alfa is more effective than beractant in preventing pneumothorax, especially in VLBW infants. This is consistent with findings from other observational studies and meta-analysis. It provides additional insights into a potentially significant factor that may influence the choice of surfactant preparations in preterm infants, especially VLBW infants. preparations are more superior than.

The authors’ contributions were as follows: X.D. collected the data and wrote the manuscript; A.A.A.H., M.C.C., V.S.R and S.C. designed, supervised the research project and co-wrote the manuscript; S.E.S. performed the statitical analysis; S.C. had primary responsibility for final content.

The authors have no competing interest to declare.