Introduction: Histological diagnosis is gold standard in many of the pediatric onset liver diseases. The safety and efficacy of the liver biopsy is less studied in infants and children, even though it is more often performed than in adult. We retrospectively reviewed the patients who had undergone percutaneous liver biopsy (LB) to assess the safety and role in the diagnosis of liver diseases.

Patients and methods: A total of 234 cases of ultrasonography (USG) guided percutaneous LBs under the age of 20 years were performed (January 2013 to December 2015). The diagnostic yield was assessed in a 5-point scale [‘confirmed’, ‘confirmed, changed’, ‘supported’, ‘supported, changed’ and ‘no benefit’].

Results: Cholestasis of infancy was the most common indication (47.4%), followed by suspected glycogen storage disorder (14.1%) and rest were patients of chronic liver diseases of various etiologies. LB confirmed the specific etiologies of cholestasis of infancy in more than 90% of cases and the procedure was safe in young infants. Overall, most common confirmed etiologies confirmed were congenital hepatic fibrosis (16.2%), glycogen storage disorder (11.5%), progressive familial intrahepatic cholestasis (16.7%) and biliary atresia (6.4%). The proportion of confirmed cases were significantly more among infants < 3 months as compared to older children (82.6% vs. 39.7%; p<0.001).

Conclusion: Liver biopsy in infants and children is a safe procedure, with high yield and very low rate of serious complication (1.2%).

Liver biopsy is very important investigative tool to make the diagnosis of liver diseases during infancy and childhood as compared to adults [1]. Various academic societies guide clinicians regarding indications and precautions during the procedure both in children and adults [2]. The procedure is safe in expert hands. The technique of doing LB have undergone great evolution in the recent past, where the traditional methods of blinded liver biopsy has been replaced by Ultrasound guided targeted biopsy [3-5]. There is insufficient data on the safety and efficacy of USG guided liver biopsy in infants and children from Asia. We analyzed cases of liver diseases who had undergone percutaneous liver biopsy for the safety of the procedure and its role in confirming the diagnosis of underlying liver disease.

Patients who underwent Ultrasound guided percutaneous liver biopsy by a single radiologist between January 2013 to December 2015 were analyzed. Age of the study subjects ranged from 1 month to 20 years. All liver biopsies were done in radiology suite of the department. After confirming the indication and a diagnostic USG of the liver, informed consent from the parents taken. All patients were admitted for the procedure and observed for 24 hours as inpatients. Patients with major contraindications were excluded (INR more than 1.5, platelet count less than 60,000/µL, acute liver diseases and gross ascites). Hematological parameters are corrected before the procedure. BARD® biopsy gun (10 cm X18G) was used in all patients. All biopsies are done under sedation with midazolam and ketamine in an aseptic condition. Not more than 2 passes were allowed. LB sample was divided in three for histology, electron microscopy and copper estimation depending upon the indications. Other than routine hematoxylin and eosin stain, special stains like reticulin, Masson trichrome, Orcein, Periodic Acid Schiff with and without diastase and Perls’ were performed. CK7 IHC, HBsAg, HBcAg was done in selected cases. Repeat USG abdomen was done at 24 hours to look for local complications like hematoma and ascites. We used common terminology criteria for adverse events (CTCAE) version 4.0 for defining the adverse events [6]. For better understanding, the study subjects were divided in three different age groups for analysis; infants less than 3 months, between 4-12 months and children older than 1 year. We designed a 5-point scale to look at the diagnostic yield of the liver biopsy [‘confirmed’, ‘confirmed, changed’, ‘supported’, ‘supported, changed’ and ‘no benefit’]. The definitions are elaborated in Table 1.

Table 1: Definition of a prior decided categories of outcome of liver biopsy.

The continuous variables are given in median and range. Categorical variables are tabulated as proportions. To compare the proportion of cases in different age categories across various diagnostic category chi-square test is used. p<0.05 is considered statistically significant.

During the study period 300 LBs were performed, of which 234 (males: 67.5%) biopsies were analyzed. Rest excluded due to incomplete details. Selected base line characteristics are shown in Table 2. Indications for liver biopsy across different age groups are shown in Table 3. Cases considered under Metabolic liver diseases category are suspected cases of Wilson disease, tyrosinemia, other small molecule inborn errors of metabolisms like fatty oxidation defects, urea cycle disorder, organic acidemia, mitochondrial hepatopathy, Indian childhood cirrhosis and cystic fibrosis. Similarly, cases considered under miscellaneous group included various liver malignancies, hemophagocytic syndromes (HLH), storage disorders other than glycogen, drug induced liver diseases (DILI) etc. The most common indications were cholestasis of infancy (47.4%), followed by glycogen storage disorder (14.1%). Infantile cholestasis accounted for 91.5% of all liver biopsy in infants less than 3 months (22 of 24). Figure shows the outcome of liver biopsy as per the a priori decided scale (Table 1). Highest number of confirmed cases were in infants aged less than 3 months (82.6%), which decreased to 68.2% in older infants (p>0.05). The number of confirmed cases is significantly high among infants <3 month and 4-12 months as compared to older children (82.6% vs. 39.7%; p<0.001, 68.2% vs. 39.7%; p<0.001) respectively. Among children (>12 months) role of liver biopsy had predominantly supportive (41.4%) along with other investigation of concerned disease. The final diagnosis after the histological confirmation among study subjects is shown in Table 4. The four most common diagnosis made were congenital hepatic fibrosis (16.2%), GSD (11.5%), PFIC (16.6%) and biliary atresia (6.4%). Three (1.2%) major complications were seen. Two were inadverant colonic perforation presenting as mild lower gastrointestinal bleed and one case of right sided pneumothorax, all survived without any sequelae. Two (0.8%) minor complications in form of sub capsular hematoma was detected during followw up USG done at 24 hours.

Table 2: Baseline characteristics of study subjects at admission for LB. 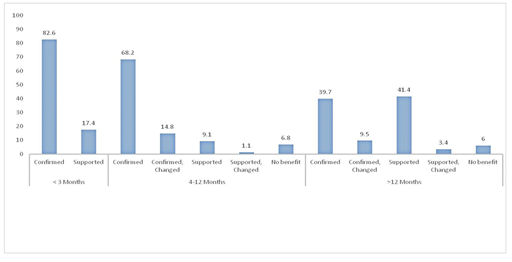 It is clear from present study that liver biopsy has a key role in the diagnosis liver diseases in infants and children. It is more informative when done in infants under the age of one year. Infants usually manifest with cholestatic liver disease which is a heterogeneous group and needs characterization. In our series nearly 50% of the cases were infants, and cholestatic liver disease of infancy was the most common indication. Whereas above the age of one-year various chronic liver disease constituted the majority. In a series by Govender et al., abnormal liver chemistries were the most common indication, followed by chronic viral hepatitis and post liver transplantation [5]. Similarly, Wertheim BH et al. in a series of 275 biopsies, post transplantation rejection and abnormal liver chemistries accounted for 59% of cases. Neonatal cholestasis accounted only for about 15% of all biopsies [7]. According to Bazlul et al., in series of 115 patients, chronic liver diseases accounted for 46% of all biopsies and only 13% are done for confirming cholestatic liver disorders [4]. This disparity may be due to differences in study setting and the referral bias.

For the first time we used 5-point diagnostic scale in categorizing the yield of liver biopsy in infants and children. The liver biopsy confirmed nearly 90% of the diagnosis in infantile age group and upto 40% in older children. Among the confirmed cases most common were congenital hepatic fibrosis, progressive familial intrahepatic cholestasis, syndromic and non-syndromic paucity of interlobular bile ducts, biliary atresia glycogen storage disorder and chronic Budd Chiari syndrome. This observation is strikingly better than what is reported in a cohort of adult patients where only 14% of the diagnosis changed after liver biopsy [8]. In this observation, only asymptomatic adults with abnormal liver enzymes are included to assess the outcome of liver biopsy in confirming the presumptive prebiopsy diagnosis and its utility in management of the patient. In 36% of subjects the liver biopsy results altered further monitoring protocol. This study addressed a focused clinical question among asymptomatic subjects as compared to predominantly symptomatic children in our cohort. The 5-point diagnostic scale which is applied in present study for assessing diagnostic yield is not been used so far both among children and adults. This scale is very informative, where one can categorize the liver disease patients after liver biopsy and assign for particular management protocol. Though some supportive evidences may be required to make a definite diagnosis in selected cases of the liver disease.

There are different methods of doing liver biopsy in children and adults. This includes percutaneous biopsy, transjugular and endoscopic ultrasound guided. We used USG guided percutaneous liver biopsy, which is now the standard of care in children. This is very safe and complications are less. In our series 2% of patients had procedure related complications. Complications are relatively less in infants. It is absolutely safe in infants less than 3 months without any complications as compared to Azzam et al who documented complications in 18% of the subjects, with nearly 50% of them due to major bleed, bile leak and skin hematoma [9]. Over the years there is inclination to USG guided rather than blind biopsies with lesser rate of complications [5]. According to various reports the major and minor complications as defined by CTCAE version 4.0 ranged from 0-14% and 0-40% respectively [6]. Various risk factors implicated in predicting bleed and other major complication are ALF and malignancy as indication, biopsy of focal lesion and use of heparin [7]. Contrary to the belief, use of aspirin did not increase the risk of bleed. In our cohort major complications are seen in 1.2% and 0.8% minor complications which is comparable to many other reports [10]. Ours is the first report of hollow viscus perforation documented in pediatric liver biopsy procedure. This may be due to abnormal colonic anatomy which would have been missed during initial USG. Certain conditions like Budd Chiari syndrome are more prone for complication due to increased vascularity of the liver and nodule formation. Lesser rate of complications among infants might be due to significantly better coagulation profile and near normal platelet count as compared to older children, where majority of the indications are due to cirrhosis with worse parameters. The limitation of this study is that, this is retrospective study and the present diagnostic scale needs prospective validation in infants and children suffering from liver disease.

To conclude, liver biopsy is safe in infants and children, it has excellent diagnostic yield, especially among infants. The scale used in the present study seems to be very helpful in arriving at a specific conclusion and planning further investigation and management. Infantile cholestasis is the most common indication, followed by glycogen storage disorder. Two percent developed some complication and there was no mortality.

What this Study Adds

Liver biopsy is safe in infants and children. Infantile cholestasis is the most common indication in children in a non-transplant liver unit. A newly designed 5-point diagnostic scale was helpful in assessing the yield. Yield of liver biopsy in maximum in infants.

None to disclose; Study involves: Human subject. Liver biopsy of the children was performed to reach a diagnosis