Spontaneous bacterial empyema (SBEM) is a life-threatening and underdiagnosed development of hepatic hydrothorax (HH), which is a significant complication of liver cirrhosis and portal hypertension. SBEM is the development of a spontaneous infectious process in a pre-existing pleural effusion without any evidence of pneumonia in patients with Hepatic Hydrothorax. Patients with SBEM has poor prognosis with significantly high rate of mortality and morbidity. We present the case of a 54-year-old female with history of decompensated liver cirrhosis secondary to alcohol use disorder, recurrent ascites, refractory bilateral pleural effusions who had developed SBEM associated with uncharacteristically high glycopleuria values. In this article, we will emphasize on recent data focusing on the diagnostic complications and treatment of cirrhotic patients with SBEM. Increased awareness of this uncommon condition will help clinicians recognize and address it early.

Hepatic hydrothorax (HH) is described as the presence of a pleural effusion in patients with established evidence of liver cirrhosis or portal hypertension. Although it has prevalence of 5-12% in cirrhosis patient [1], the diagnosis of hepatic hydrothorax can be made if other etiologies of pleural effusion such as cardiovascular, pulmonary, rheumatologic, or malignancy are excluded. SBEM is described as the spontaneous development of an infectious process in the pleural fluid without any evidence of pneumonia or other systemic illnesses in patients with pre-existing hepatic hydrothorax. Although cases of SBEM are rare, it is important for clinicians to be mindful of its diagnostic complications and treatment as mortality rate can reach up to 20% without treatment [1]. 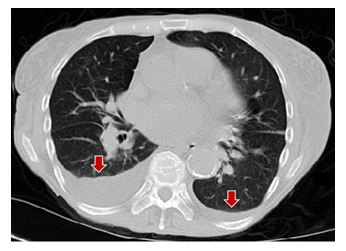 Hepatic hydrothorax (HH) is described as the collection of significant pleural effusion, generally more than 500 ml, in a patient with end-stage liver disease without any underlying cardiac or pulmonary cause. It is an unusual complication of portal hypertension, with propensity to involve right lung in majority of the cases but can be left-sided or bilateral [3].SBEM, which is defined as the spontaneous infection of the pleural fluid, is a life-threatening complication of HH. A prospective study conducted by Xiol et al. reported that 43% of the episodes of SBEM in 120 cirrhotic patients with Hepatic Hydrothorax were not associated with Spontaneous Bacterial Peritonitis (SBP), thus making the diagnose more challenging [4].

SBEM remains to be underreported not only because patients with HH are rare in hospital settings but also because the diagnostic test, thoracentesis, is not routinely done in cirrhotic patients with hydrothorax. Although therapeutic thoracentesis can be advantageous in order to alleviate the symptoms of hepatic hydrothorax, the main disadvantage is that it can cause iatrogenic pneumothorax, which can be fatal. A prospective study conducted by Castellote et al revealed that there is an eight percent incidence of pneumothorax in post-thoracentesis patients who had liver cirrhosis complicated by hydrothorax, which only complicates to the diagnostic process [5].

There are multiple prognosticators for poor clinical outcome in patients with SBEM, which is important for clinicians to recognize as it will promote careful monitoring in particularly susceptible patients. They include high Model for End stage Liver Disease-Na (MELD) score, initial admission into the intensive care unit (ICU) and lastly, treatment failure with initial antibiotics [6]. In patients with hepatic hydrothorax who develop fever of unknown origin, worsening kidney functions, unexplained acute onset encephalopathy, or worsening pleuritic chest pain or shortness of breath, clinicians should have high degree of suspicion for the diagnosing SBEM. In such patients, early thoracentesis with fluid studies is warranted in order to identify the diagnostic criteria for SBEM which include (i) PMN count >250cells/µL with positive pleural fluid cultures or PMN count > 500 cells/µL with negative cultures, (ii) serum to pleural fluid albumin ratio >1.1g/dL or absence of other infectious etiologies on chest radiograph or CT and (iii) evidence of pleural effusion before the infectious episode or pleural fluid transudate characteristics during infection [7].

Although pathogenesis of SBEM is unknown, it is acknowledged that cirrhotic patients have impaired immune function secondary to decreased synthetic function of the liver, making them prone to infections and infection-related complications [8]. It was originally presumed that SBEM was the consequence of a direct translocation of bacteria from the peritoneal cavity into the pleural cavity through a diaphragmatic or other anatomical defect. However, later studies have revealed that about forty percent of the SBEM episodes were not associated with SBP and some episodes occurred without any evidence of ascites [7, 9]. In these cases, it was hypothesized that the underlying pathogenetic mechanism of SBEM was that transient bacteremia allowed organisms travel within the bloodstream and infect the pleural space. Studies done by Sese [9]have demonstrated that cirrhotic patients with hepatic hydrothorax have low ascites complement levels and opsonic activity, which enhances bacterial translocation. It can be hypothesized that defective local factors in pleuritic fluid can promote colonization by pathogenic bacteria, thereby enhancing risks for infection in these patients.Early studies by Sese also demonstrated that patients with lower total protein, lower levels of pleural fluid C3 and a higher Child-Pugh score were more prone to develop SBEM than their counterparts [9, 10].

Management of SBEM can be challenging due to poor liver function and renal dysfunction associated with cirrhotic patient. Use of third generation cephalosporin have shown promising effects [10]. Chest tube drainage is an alternative treatment option; the only indication includes formation of purulent materials in the pleural space [6]. If pus is not formed, chest tube drainage is not indicated for the treatment of SBEM even if fluid cultures are positive [6].

It is interesting to note that other treatment such as liver transplantation provided a good survival benefits in patients with recurrent SBEM. A prospective study performed by Xiol et al. have demonstrated that there were minimal or no variations in survival rates between a group of patients who had uncomplicated or non-refractory hydrothorax versus those who had refractory hydrothorax with recurrent SBEM requiring transplantation [11]. Although additional investigations are necessary to successfully evaluate the effectiveness of liver transplant in these patients, it can be inferred that transplantation can offer advantageous results and serve as an excellent therapeutic choice for cirrhotic patients with hydrothorax, even with or without the complications of SBEM.

Majority of pleural empyema is generally accompanied by low glycopleuria values while SBEM has characteristically high glycopleuria level. This case is peculiar in that the glycopleuria value was in the higher range (103 mg/dL) compared to what is characteristically seen in patients with SBEM. In a review article by Chaaban et al. [12] had suggested that the glycopleuria level in patients with SBEM can reach up to 80mg/dl which is particularly different when compared to the fluid studies in patients with pleural empyema, which is characterized by a low glucose level. Another significant finding in this case was that although traditional criteria of chest tube drainage were fulfilled, our patient with recurrent empyema did not require it and responded well to the antibiotic course.

SBEM can be easily missed. It is vital for physicians to include SBEM in the differential diagnosis in patients with HH who develop fever of unknown source, worsening renal functions or unexplained acute encephalopathy, especially if they have features related to poor outcome.