Persistent trigeminal artery (PTA), is the commonest embryological carotid-vertebrobasilar anastomosis persisting into adult life. During early embryonic life, trigeminal artery, among others, connects primitive anterior and posterior circulations and shunts blood from primitive cavernous internal carotid artery (ICA), to paired plexiform longitudinal neural arteries, the precursors of vertebral-basilar system, till later develops and takes over the posterior circulation [1, 2]. PTA has an incidence of ~ 0.68% and has been associated with various cranial nerve palsies (e.g. CN III or CN VI), hemifacial spasm, trigeminal neuralgia, subarachnoid hemorrhage, posterior circulation TIA or stroke, intracranial aneurysms or arteriovenous malformations [2-4]. PTA originates from cavernous ICA proximal to the meningohypophysial trunk and terminate by joining mid basilar trunk between the superior cerebellar artery (SCA) and anterior inferior cerebellar artery origins (AICA) [1, 2]. The posterior communicating arteries (PCoMs) and vertebrobasilar system proximal to the communication may be hypoplastic (Saltzman Type A) with PTA serving as a sole source of blood supply to distal basilar artery in such cases and need to be preserved during intervention [2-4].

Emboli originating from ulcerated carotid plaques are known to travel across PTA leading to posterior circulation ischemic stroke. There have also been reports of vertebrobasilar insufficiency (VBI) attributed to PTA. Most of the later cases have concurrent ICA stenosis. We describe here, a patient with posterior cerebral artery occlusion and another patient with infarct in middle cerebral artery territory associated with PTA.

A 55-year-old hypertensive female presented with history of loss of bilateral vision loss, right sided weakness and an episode of headache since 7 days. CT head showed ill-defined hypodensity involving the left medial temporal and adjacent medial left parieto-occipital lobe (Figure 1A). Cerebral angiography of head and neck arteries revealed a complete occlusion of the left posterior cerebral artery beyond P1 segment. The basilar artery was supplied by the

right ICA via the PTA (Saltzman type I) (Figure 1B & C). The basilar artery caudal to the basilar top was attenuated in calibre (Figure 1C). Bilateral carotid arteries were tortuous in course, however, no haemodynamically significant stenosis or extracranial or intracranial atherosclerotic changes were observed. Echocardiography shows left ventricular hypertrophy with left ventricular diastolic dysfunction and the etiology was assumed to be a cardioembolic stroke with clot migrating to left PCA from anterior circulation across PTA. 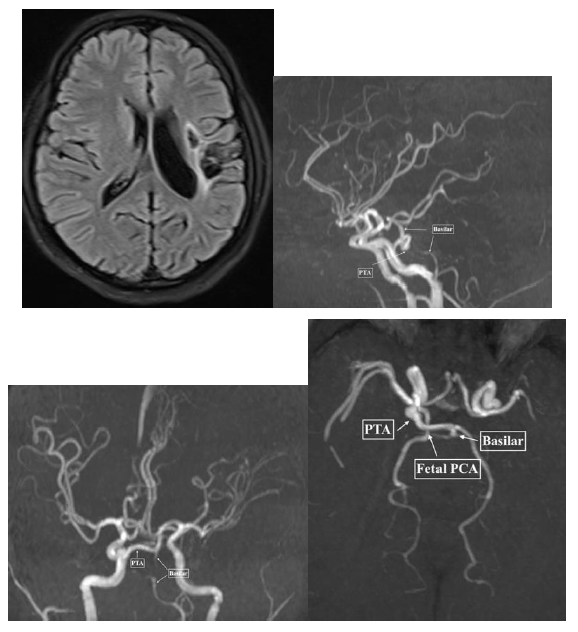 During early fetal life, carotid-vertebrobasilar anastomoses connect ICA precursors to paired longitudinal neural arteries and maintains the circulation to hind brain till vertebrobasilar system develops [2, 3]. These regresses subsequently, although their persistence into adult life have been well documented. PTA is, although rare, is most commonly encountered among these persisting vestiges, with a reported incidence of ~0.68% [2-4]. PTA originates from cavernous ICA proximal to the meningohypophysial trunk and terminate by joining mid basilar trunk between the superior cerebellar artery (SCA) and anterior inferior cerebellar artery origins (AICA) [1, 2]. The posterior communicating arteries (PCoMs) and vertebrobasilar system proximal to the communication may be hypoplastic (Saltzman Type A) with PTA serving as a sole source of blood supply to distal basilar artery in such cases and need to be preserved during intervention [2-4]. PTA may not be an important source of posterior circulation when PCoMs and vertebrobasilar system proximal to anastomosis is normal (Saltzman Type 2). At times, PTA may terminate in to SCA, AICA or posterior inferior cerebellar artery (PICA), (Saltzman Type 3a, b and c, respectively) [1, 3-5].

The occurrence ischemic stroke in association with PTA is rarely reported and the role of PTA in ischemic stroke has been poorly understood. Attenuated calibre of proximal basilar artery and bilateral vertebral arteries may have some role to play in posterior circulation stroke. Since PTA shuts the blood from anterior to posterior circulation the boundaries between these two territories are blurred as in first case described above. A thrombus of anterior circulation may freely ‘float’ to posterior circulation across this persistent embryonic conduit. The vast majority of case reports on the role of PTA in the setting of ischemic cerebrovascular disease supported the viewpoint that the existence of PTA may increase the risk of ischemic stroke [6-8]. The compression of pons from the PTA also could cause brainstem transient ischemia stroke [9]. Here we present two cases of supratentorial ischaemic strokes in the setting of PTA, involving PCA territory and cortical branches of MCA territory, both being atypical vascular distributions.