The loiasis is limited to, Western and Central Africa. Characteristic clinical features include Calabar swellings and subconjunctival migration of the adult parasite. Severe complications of infection, including cardiomyopathy, nephropathy, and fatal encephalitis, are rare, but do occur. So far, all Moroccan cases are seen in adult travelers. We report the first case of autochthone loiasis in a Moroccan child.

Loiasis, infection with the filarial nematode Loa loa, is limited to and highly endemic in Central and West Africa. Characteristic clinical manifestations include episodic angioedema and subconjunctival migration of adult worms. Microfilariae are detected in the peripheral blood during the day. Treatment with diethylcarbamazine, ivermectin or albendazole is curative in most cases. Unfortunately, these drugs are associated with severe side effects, especially in patients with high levels of microfilaremia. We report the first case of a native subconjunctival loiasis in a Moroccan child.

A well-appearing 11-year-old boy, with no medical history, presented to the emergency department for complaints of foreign body sensations of the right eye evolving for three days. He was original from Ouarzazat, a city in southern Morocco. He never traveled abroad or contacted any foreigners or travelers before. The child reported several episodes of transient swelling of the lid, associated with painful eye redness, tearing, and photophobia for the last two months. He was seen by several ophthalmologists who treated his condition as severe allergic conjunctivitis without any improvement. No other previous cardiac, abdominal, or skin manifestations were reported. The boy was apyretic with a body temperature of 37.2°C. General examination showed no evidence of lymphedema or systemic involvement. Slit-lamp examination of the right eye found an upper subconjunctival granuloma containing a moving opalescent eyeworm with significant palpebral edema and hyperemic conjunctivitis (Figure 1). Visual acuity, eye tone, ocular fundus as well as the rest of the ophthalmological examination was unremarkable. Under topical anesthesia, an intact worm was extracted from the superior conjunctiva of the right eye (Figures 2 and 3). It was immediately sent to a specialized parasitological laboratory, which identified the specimen as an adult male Loa loa measuring approximately 3.6 cm × 0.4 mm. Simultaneously, the excisional biopsy of the upper right subconjunctival granuloma showed an inflammatory granuloma rich in eosinophils. Blood was drawn daily at noon for five consecutive days, and showed no Loa Loa microfilariae in thick blood smears stained with Giemsa stain. Meanwhile, laboratory workup found normal eosinophils count of 50/mm3 on complete blood count. Renal and hepatic functions were within the normal range (respectively urea nitrogen of 0.2 g/l, creatinine of 4 mg/l, AGPT of 13 u/l, SGPT of 16 u/l, PPT of 87%). After the diagnostic confirmation of loiasis, the child received ivermectin as a single dose of 3 mg per 6 months. Treatment was carried out successfully for twelve months, and no side effects were noted. Also, no other new cases were reported in the same area. After 18 months of follow-up, the boy remains asymptomatic and in good health. 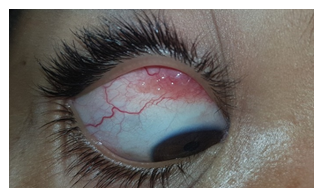 Figure 1: Subconjunctival granuloma of the right eye of an 11-year-old boy. 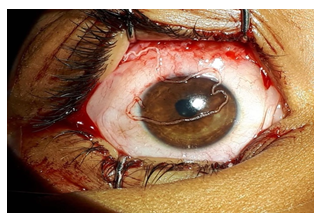 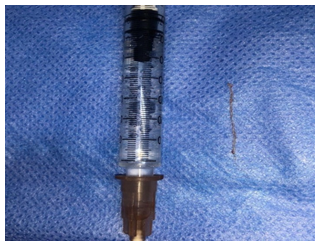 Infection with the filarial nematode Loa loa was first described by Mongin in 1770, when he extracted an adult worm from the eye of an African slave [1]. It has been estimated that Loa loa infects 3 to 13 million people in Central and West Africa [2]. Isolated cases have also been reported in Uganda, Malawi, Zambia, and Ethiopia, and in the region from Ghana to Guinea [2]. In Morocco, 26 imported adult cases were reported, with no autochthone or pediatric cases found to date [3]. Infection rates are usually higher in adults, particularly males, than in children, probably because of increased exposure to biting flies (Chrysops) [4].

Loa loa infection may be present as asymptomatic microfilaremia, with the infection being recognized only after subconjunctival migration of an adult worm. Other patients have episodic Calabar swellings. If the associated inflammation extends to the nearby joints or peripheral nerves, entrapment neu­ropathy or arthritis can develop. Nephropathy, encephalopathy, and cardiomyopathy can occur, but rarely [5]. Except for eye worm and renal abnormalities, clinical signs and symptoms are more common in visitors to Loa-endemic areas than in people native to these areas and reflect a heightened immune response to the parasite. Conversely, microfilariae are detectable in the peripheral blood of most endemic individuals with loiasis but are rare in infected visitors [6]. Definitive diagnosis can be made by extracting an adult worm from subcutaneous or subconjunctival spaces or identifying Loa loa microfilariae (or their DNA) in peripheral blood [6]. The removal of a subconjunctival worm requires topical or subconjunctival anesthesia, which may help to immobilize the worm. A suture is passed under the worm and tied tightly, and the worm is dissected out. Alternatively, cryo­therapy may help immobilize the worm or be used for removal [7]. Surgical removal of the adult worm from the subconjunctival space is always recommended. Still, systemic treatment should be considered for the eradication of remaining adult worms and microfilariae in order to reduce transmission [8]. Treatment with diethylcarbamazine (DEC), albendazole, or ivermectin is curative in most cases. However, these drugs are associated with severe side effects in patients with high levels of circulating microfilariae [2]. Clearance of forest around dwellings, screening houses, and the use of protective clothing can reduce personal exposure to Chrysops in endemic areas. DEC (300 mg weekly) is effective in preventing loiasis in long-term travelers to endemic areas [9].

Eyeworms can be due to native loiasis in southern Morocco. Management consists of surgical removal and antiparasitic drugs. Prognosis is good whenever multisystemic involvement is absent. Further epidemiological studies are required to assess the incidence of loiasis in north African countries.