Uterine Didelphys with Obstructed Left Hemivagina with Haematometrocolpos: A Rare Congenital Cause of Lower Abdominal Pain in Young Female

Uterus didelphys is a very rare mullerian duct anomaly and is part of various congenital anomalies of female genital tract. We report a case of eighteen years old female presenting with lower abdominal pain and dysmenorrhorea diagnosed to have uterine didelphys with obstructed left hemivagina with haematometrocolpos on MRI and managed by excision of vaginal septum and relieved of symptoms.

Mullerian duct anomalies are congenital defects of female genital tract with an incidence ranging from 0.5-5% in general population. These result from abnormal embryological development of the mullerian ducts varying from failure of development, fusion, canalization or reabsorption occurring between 6-22 weeks in utero [1-4]. Uterus didelphys is the 2nd most uncommon mullerian duct anomaly resulting due to lack of fusion of mullerian ducts with presence of two hemiuteri and cervices however the vagina may be single or double. There may be presence of a longitudinal or transverse vaginal septum may be noted which when present may result in haematometra and haematocolpos [1-2]. Most women are asymptomatic with didelphys uterus or may present late in life with infertility, poor pregnancy outcomes or in younger patients with dyspareunia or dysmenorrhoea due to vaginal obstruction by vaginal septum [1-2]. Renal anomalies may be associated with uterine anomalies due to abnormal embryological arrest of development of metanephric ducts along with mullerian ducts [2].

An 18 year-old unmarried girl presented to the Gynecology OPD with complaints of lower abdominal pain and dysmenorrhoea. On general physical examination there was a palpable mass felt in the hypogastrium region. On per vaginal examination, there was cystic bulge in the left lateral vaginal wall and cervix could not be felt as there was a vaginal septum partially obstructing the vagina. USG was done which showed two separate uterine horns with showed collection with mobile internal echoes in the endometrial and cervical canal of left moiety. MRI pelvis was done which showed two uterine horns and cervix with no obvious communication between the endometrial cavity of both uterine horns (Figure 1). The left endometrial cavity and cervical canal were grossly dilated which showed T1 and T2 hyperintense contents within, likely blood products with abrupt narrowing at the level of upper vagina likely due to vaginal septum (Figure 2). Thus confirming the diagnosis of uterine didelphys with haematometra and haematocolpos in left moiety likely due obstruction by vaginal septum. The patient had complaints of dysmenorrhoea and lower abdominal pain for which per vaginal septotomy was performed and purulent bloody discharge was drained. There was no post procedure complication and patient was relieved of her symptoms after surgical excision of the vaginal septum. Vaginal examination at postoperative showed two cervices. 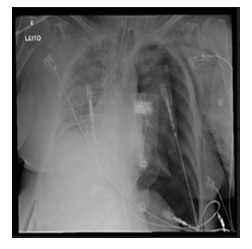 Figure 1: MRI pelvis T2WI (coronal view) showing two uterine horns and cervix with no obvious communication between the endometrial cavity and haematometra with haematometrocolpos in the left moiety (White arrow). 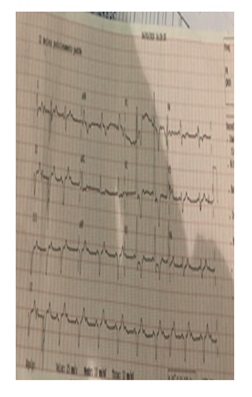 Patients with this anomaly generally present with severe dysmenorrhoea, lower abdominal pain, pervaginal mass or discharge or bleeding [7]. Uterus didelphys has been associated with infertility, spontaneous abortion, IUGR, preterm labour and post partum bleed [8]. Imaging using various modalities such as USG, MRI are essential for diagnosis of this condition. USG can be used as screening modality which is cheap and easily available modality. However cannot differentiate between various subtypes of mullerian duct anomalies. MRI pelvis is highly sensitive for detection of mullerian duct anomaly and accurate [9-11]. Other invasive methods such as hysteroscopy, HSG, laproscopy and laparotomy are less commonly used for diagnosis. Surgical correction of didelphys (metroplasty) is not indicated with no significant literature on the same. However patients with uterus didelphys and vaginal septum with symptoms such as dyspareunia, dysmneorrhoea and abdominal pain need treatment in form of resection of vaginal septum [12]. This relieves the patients of symptoms and preserves the reproductive capabilities as was done in our case.

Uterus didelphys is a rare mullerian duct anomaly which can be diagnosed by imaging non-invasively. The condition needs to be diagnosed at an early age to prevent abdominal symptoms, infertility and obstetric complications and requires surgical management in symptomatic patients.