A Case of Excavated Pneumopathy after Bronchial Thermoplasty

Bronchial thermoplasty (BT) is a bronchoscopic treatment for patients with severe asthma that remains uncontrolled despite optimal medical therapy. Several adverse effects and acute radiological abnormalities have been described, but excavated pneumopathy has never been reported as a complication of BT. We describe the development of excavated pneumopathy after the last BT procedure. A 60-year-old woman with severe uncontrolled asthma, despite maximal medical treatment, underwent BT. After the third procedure, she developed an exacerbation of asthma with respiratory deterioration after a reduction in systemic corticosteroid treatment. Chest computer tomography revealed nodular excavated opacities in contact with the bronchial tree, limited to the upper lobes and the lingula. This case suggested that intense thermal stimulation of the bronchial mucosa may lead to tissue fragility and alveolar lung lesions.

Bronchial thermoplasty (BT) is a bronchoscopic treatment for patients with severe asthma that remains uncontrolled, despite optimal medical therapy. Through the operating channel of the bronchoscope, a catheter with a basket design emits thermal energy produced by a radiofrequency generator (Alair™ Bronchial Thermoplasty System). The thermal energy is directed at segmental and subsegmental airways. This system delivers a constant temperature of 65°C in 10-second pulses at each treatment site. Sites range from small 3-mm bronchi to lobar bronchi and treatments are delivered over three sessions at 3-week intervals. This treatment directly reduces airway smooth muscles [1], and thus, relieves bronchoconstriction in asthma attacks. During intervention, or a few days after, significant respiratory adverse effects have been described, but disappear within a few days [2-4]. It is well known that different patterns of acute radiological abnormalities (including bronchial dilatations) occur after BTs, but they lack clinical impact in nearly all cases. In this case report, we describe an excavated pneumopathy that appeared after the last BT procedure.

A 60-year-old Caucasian woman, who was a nurse and marathon runner, presented with severe uncontrolled asthma despite maximal medical treatment (Asthma Control Test (ACT) score 16). She was referred to our center for BT. Her medical history included chronic rhinosinusitis with nasal polyps, treated with a left middle meatotomy; dysfunctional dysphonia which required speech therapy; sleep apnea syndrome, treated with continuous positive airway pressure; hepatitis C and a SARS Cov2 infection in March 2020 without complication. She was a 7 pack/year ex-smoker (quit smoking at age 23 years). Atopic asthma was diagnosed in childhood. Then, asthma recurred at age 50 years, and at that time, skin prick tests showed negative responses to aeroallergens. In 2017, a pneumologist referred her to our department for severe asthma. We found that her total IgE level was 98 kU/L without any sensitization to specific aeroallergens. The blood eosinophil count was 120/µL, but the fraction of exhaled nitric oxide was 60 ppb, and an induced sputum analysis showed a mixed granulocytic pattern (i.e., neutrophils 68%, eosinophils 13%). She was not eligible for biotherapy, due to the absence of elevated blood eosinophil counts and negative skin prick tests. She displayed uncontrolled severe asthma, despite high-dose inhaled therapy with budesonide (160 µg), formoterol fumarate (4.5 µg, two puffs, three times daily) and tiotropium (18 µg, two puffs daily). In addition, she required several treatments of nebulized terbutaline and ipratropium per week, frequent systemic corticosteroid (CS) bursts (at least three days of 40 mg prednisolone every two months), and three intravenous antibiotic treatments per year. Non-enhanced chest computed tomography (CT) demonstrated moderate, diffuse, bronchial wall thickening with minimal air trapping. There was no bronchiectasis. According to standard perioperative procedures, 50 mg of prednisolone/day was administered orally, three days prior, on the day of BT, and on the day after BT. She was hospitalized the day before BT for 3 days to monitor vital parameters, pulmonary function, and chest x-ray examinations. The first two sessions for the right and left lower lobe were performed at 3 weeks intervals (total numbers of activations were 119 and 83 respectively). There were no major complications, except mild asthma exacerbation with dyspnea and dry cough. Although these symptoms did not affect the vital or functional respiratory parameters, oral CS therapy was continued for approximately 1 week after each BT session. On March 25, 2020, the third BT procedure was performed, with 214 activations, in the left and right upper lobe bronchi with minimal bleeding. There were no endoscopic abnormalities in the airway. Before the BT, the forced expiratory volume in 1 second (FEV1) was 2.54 L (108% of predicted) and the day after the BT, it was 2.32 L (99% of predicted). Immediately after the procedure, the patient experienced a new asthma exacerbation that required the continuation of CS treatment at discharge from the hospital. The chest radiography showed no change. About ten days later, due to incomplete improvement, a new course of CS was prescribed. However, respiratory deterioration occurred when the dose was reduced. At four weeks after the third BT, the patient presented with increasing dry cough, dyspnea, and persistent left chest pain, which projected to the apex, despite oral corticosteroid therapy and nebulized terbutaline-ipratropium treatment. A chest x-ray revealed a culminal consolidation. Thus, antibiotic therapy (ceftriaxone) was initiated, and the next day, she was admitted to the hospital. There was no febrile syndrome or signs of respiratory distress, but she presented bilateral expiratory wheezing with mMRC-grade4 dyspnea and left apico-thoracic pain. These symptoms did not improve with level I analgesics. An analysis of an arterial blood sample in ambient air showed the following results: pH: 7.5, pO2: 98 mmHg, and pCO2: 28 mmHg. CT pulmonary angiography ruled out a diagnosis of pulmonary embolism but showed bilateral upper lobar and lingual parenchymal abnormalities (Figure 1) with nodular excavations. 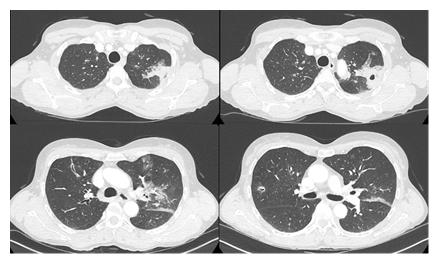 Figure 1: Chest CT acquired on April 21, one month after the third BT procedure. Bilateral abnormalities were present with increased bronchial wall thickening, peribronchial infiltration, mucoid impactions and nodular excavations in direct contact with the bronchial tree. These abnormalities remain limited to the upper lobes and the lingula. Around the left upper lobar apicodorsal lesions, there were alveolar consolidations with scattered ground glass opacities.

The serum C-reactive peptide level was 19 mg/L, with no increase in white blood cells, particularly eosinophils. The echocardiogram showed normal results, and the PCR test showed a negative result for the SARS Cov2 virus. Despite three days of treatment with antibiotics and oral CS, no improvement was observed, and the patient was transferred to our department on April 23. The total serum IgE level was 137 kU/L, and blood inflammatory markers were within normal limits. Aspergillus serology and antigenemia assessments showed negative results. An auto-immune assessment showed negative results. Bronchial fibroscopy showed normal results. A broncho-alveolar lavage performed in the culmen showed normal cytology (71% macrophages, 17% lymphocytes, 5% neutrophils, 1% eosinophils, 6% bronchial cells) and no bacteriological or parasitological infection. Gradually, the patient improved, and the peak flow value increased from 300 to 400 L/min. A follow-up chest CT performed 15 days later, demonstrated a reduction in pulmonary excavations (Figure 2).

Figure 2: Chest CT acquired on May 3, demonstrating a decrease in the overall extension of alveolar consolidations and a remaining nodular excavation.

Ceftriaxone treatment was stopped (after 14 days of treatment). CS therapy was reduced during hospitalization, and the reduction was continued at home. After 13 days of hospitalization, she returned home and received decreasing doses of oral CS for two months. The asthma improved and was controlled. She returned to work and performed sports again. A follow-up chest CT (Figure 3) showed a significant improvement.

Previously, several international trials in patients with mild to severe asthma demonstrated that BT could effectively reduce asthma exacerbations, decrease emergency department visits, and improve quality of life, with an acceptable rate of adverse events in the short-term [2-4]. The most common respiratory adverse effects, including a worsening cough, wheezing, respiratory infections, chest pain, and distress, generally occur in the initial six weeks post-BT [4,5]. In recent years, with the increasingly common use of BT, some unexpected, but notable complications have been reported, including lung abscess [6], heat-induced necrosis [7], recurrent lung atelectasis from fibrin plugs [8], pneumothorax and pulmonary cyst [9], or Aspergillus fumigatus and Nocardia spp. infections [10]. However, this study was the first to report excavated pneumopathy outside the context of an infection.

Indeed, it has been suggested that intense thermal stimulation of the bronchial mucosa with the administration of high-dose systemic steroids to control asthma attacks around the time of the BT procedure could lead to tissue fragility and might induce an infection [10]. However, we did not find any positive markers of infection. This result was consistent with findings from Debray et al [11]. They described acute asymptomatic abnormalities visible on a chest CT after a BT. Those abnormalities included ground-glass opacities or peribronchial consolidations, which spontaneously disappeared within a month. The authors hypothesized that those findings likely reflected alveolar inflammation and edema, due to heat shock. We could not confirm that hypothesis, because no biopsy was performed in our case.

Our patient presented pulmonary lesions similar to the abnormalities found after radiofrequency ablation of pulmonary neoplasms [12, 13]. In that scenario, a large temperature increase causes tissue coagulation and can destroy microcirculation, which induces peribronchial consolidations; then, scars might form during the healing process. Similar to our findings, at 1 month after a radiofrequency ablation, cavitation is a common finding. This feature was described as a reparative process that progressively decreased, with more or less scarring [13].

It remains unclear why our patient developed excavated pneumopathy. One might suspect that a dysfunction of the BT catheter might cause excessive energy delivery. However, no abnormality was observed during the three procedures.

In conclusion, the distribution and the evolution of lesions, identified by chest CT with a slow healing, suggest that this excavated pneumopathy was the consequence of an acute intense thermal stimulation. An increased radiofrequency activations number could raise the risk of complications after BT.